The mountains in Turkey are cold this time of year and since we were running short on time – we planned to take a bus from Antalya to Istanbul. The bus station looked like an airport terminal and they even have security scanners at the entrance. While we were waiting, we stocked up on some treats while Tanya mentioned that she felt cold. A lady sitting behind us turned around, watched us for a few minutes and then gave Tanya a warm red shawl before leaving for her bus. Hardly a word spoken and her kindness took us a few minutes to process, by which time she had already left. 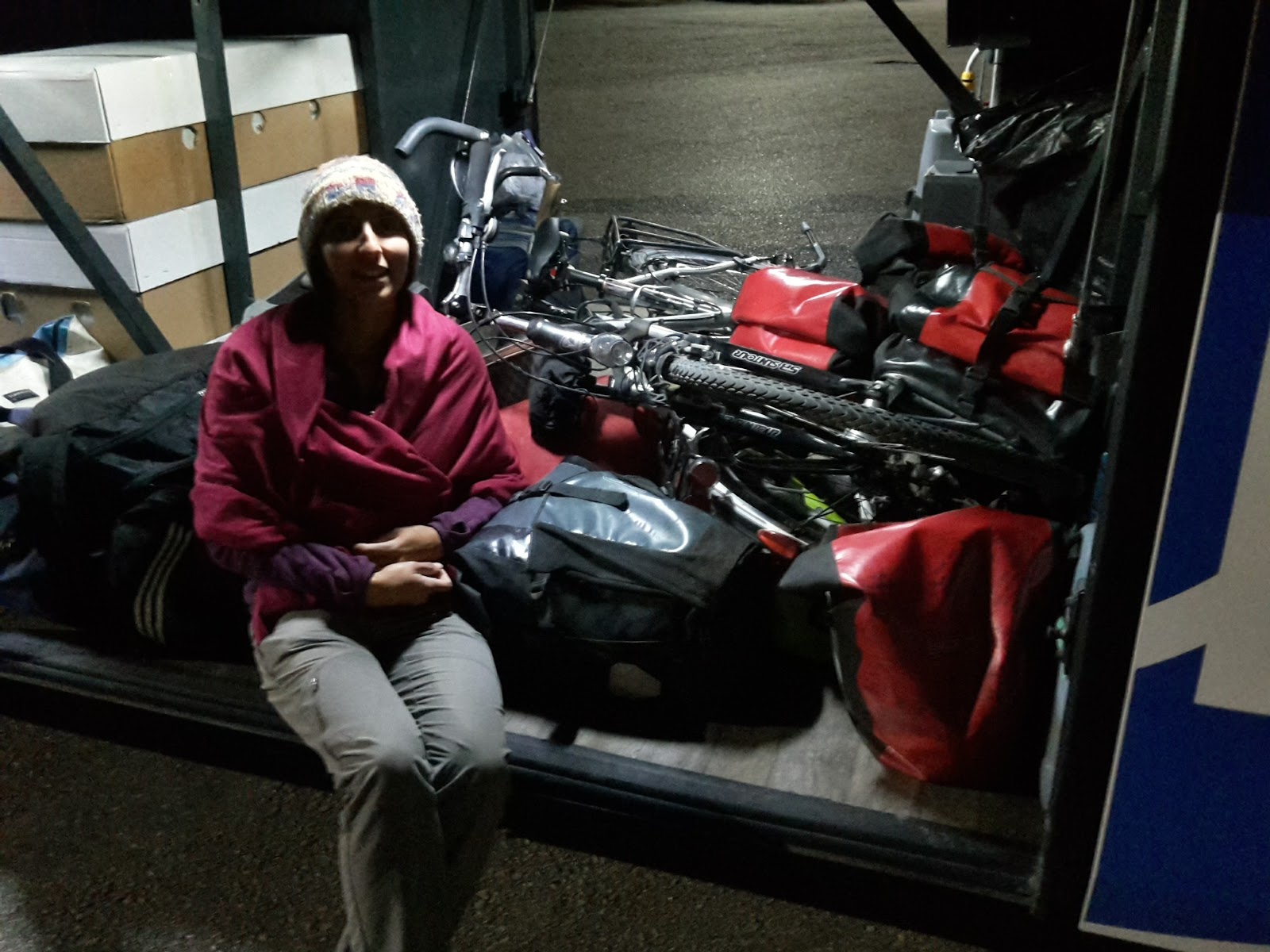 Taking the bus from Antalya to Istanbul

The bus ride took 13 hours and it was like clockwork – all 8 buses left at 7:30 pm on the dot. Arriving in Istanbul we cycled to the metro station (next to the bus station) and managed to get our bicycles on the metro with the help of a friendly staff man. The metro is large enough to fit the bikes but they are not allowed between certain times (7-9 am and 5-8pm?). Tanya tried to take her bike up an elevator with all the weight on the back – she almost almost flattened someone when the bike flipped up. 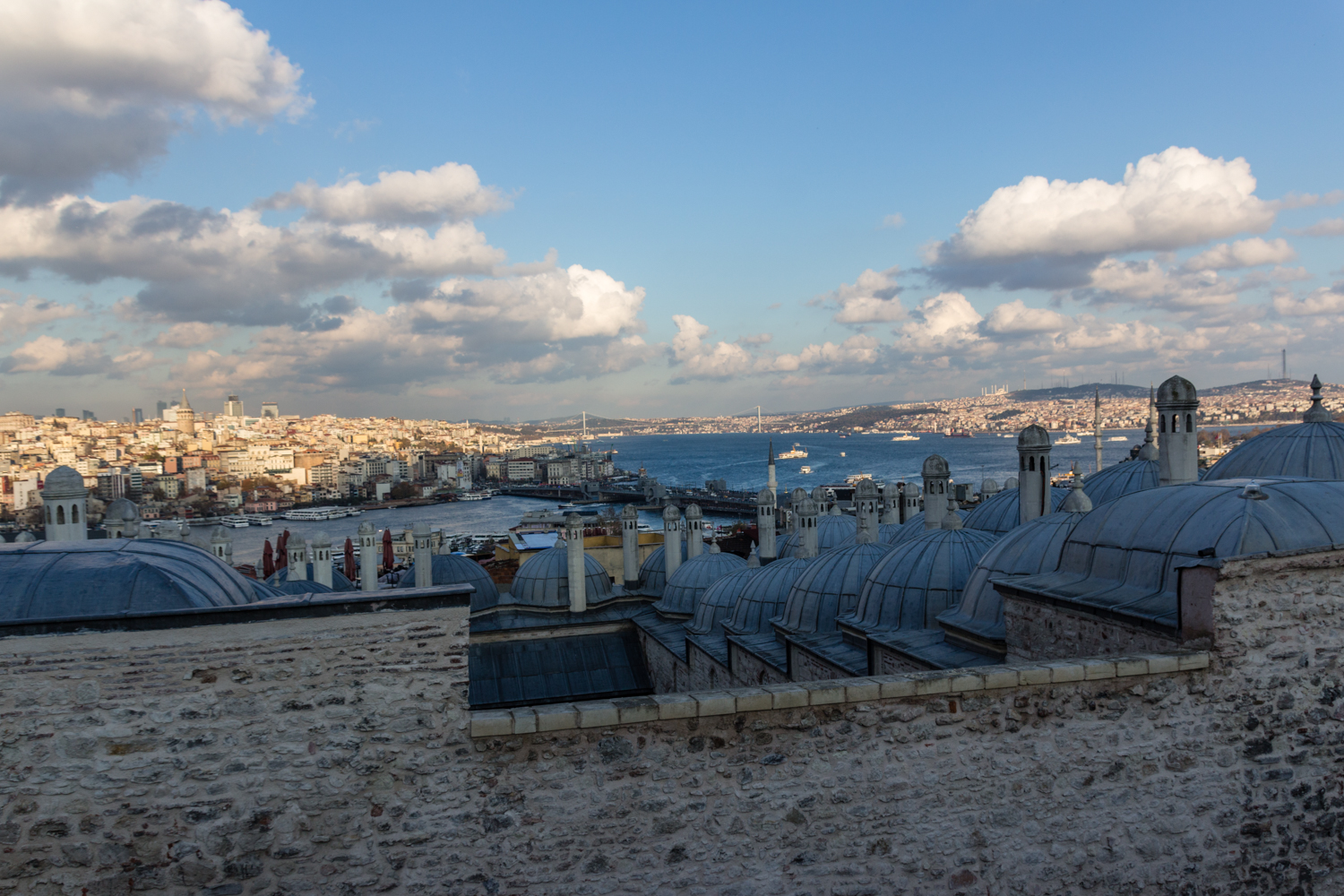 Istanbul and the Bosphorus dividing Asia and Europe

When we got off near to our apartment, though, we were introduced to the Istanbul traffic. The traffic here is crazy, you don’t know what is going to come at you next. The streets are small and many people walk with massive trolleys loaded with stuff. After a few kilometers, Simon’s gear cables snapping and a car hitting Tanya’s panniers, we were happy to arrive at the apartment. 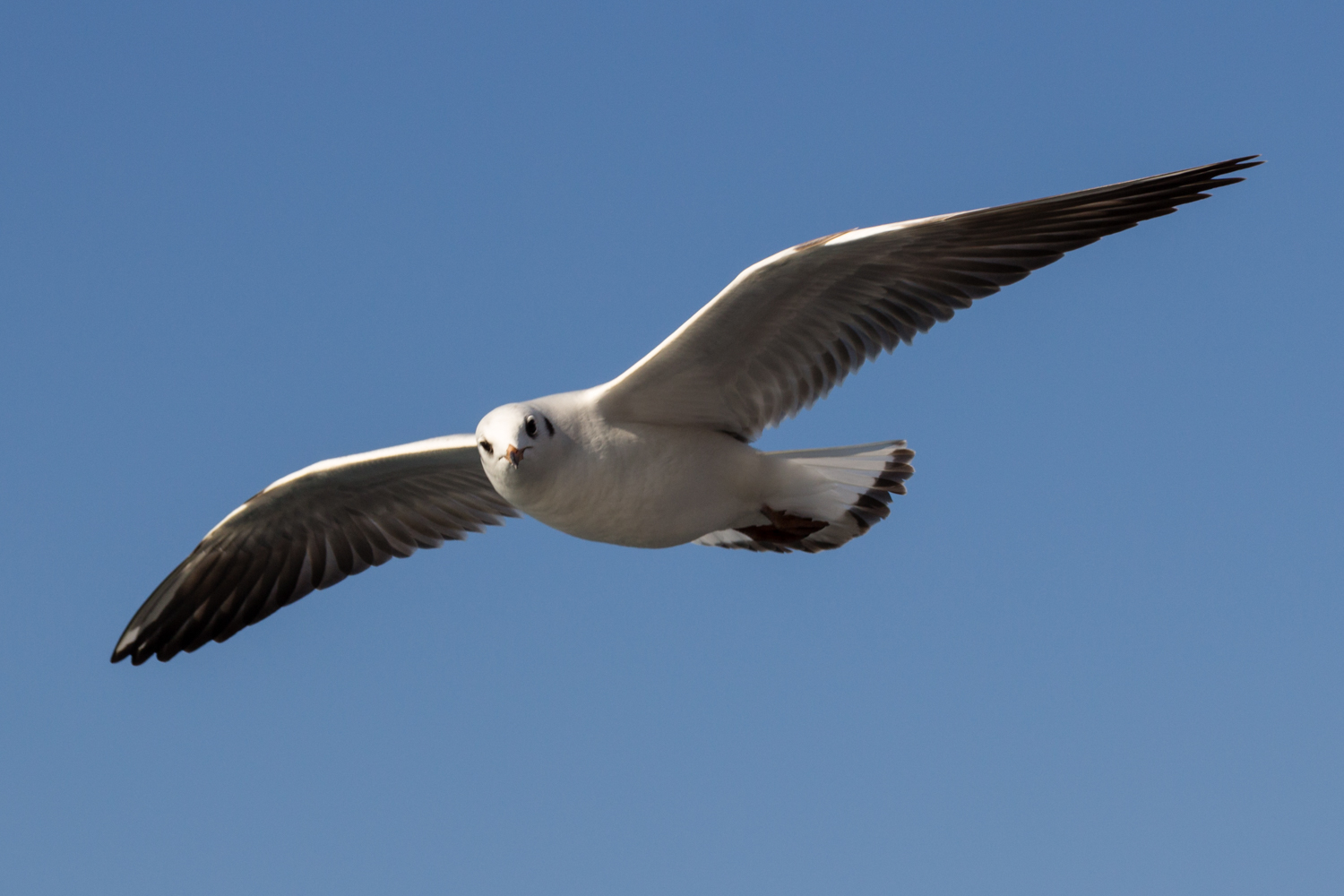 One of the many seagulls in Istanbul

Later on we took the metro over to the Asian side and cycled to an amazing bicycle store called Bisiklet Gezgini, where Alex agreed to fix up our bikes for Africa. We were very lucky to catch him before he moved his store to Athens. We left our bikes in his capable hands and took a ferry ride back across the Golden Horn channel where we immediately felt more relaxed. We could finally enjoy the amazing views of the European side of Istanbul – tall Mosques rising up over the small houses, the Hagia Sophia and other historical sites stood behind seagulls squawking, diving and shooting through the air. The backdrop of the sun lighting the sky pink and the lights of docked ships glowing in the distance was very calming. Looking at this view without the noise or claustrophobia of the big city (which was still a shock to our system after Geyikbayiri) was truly appreciated. 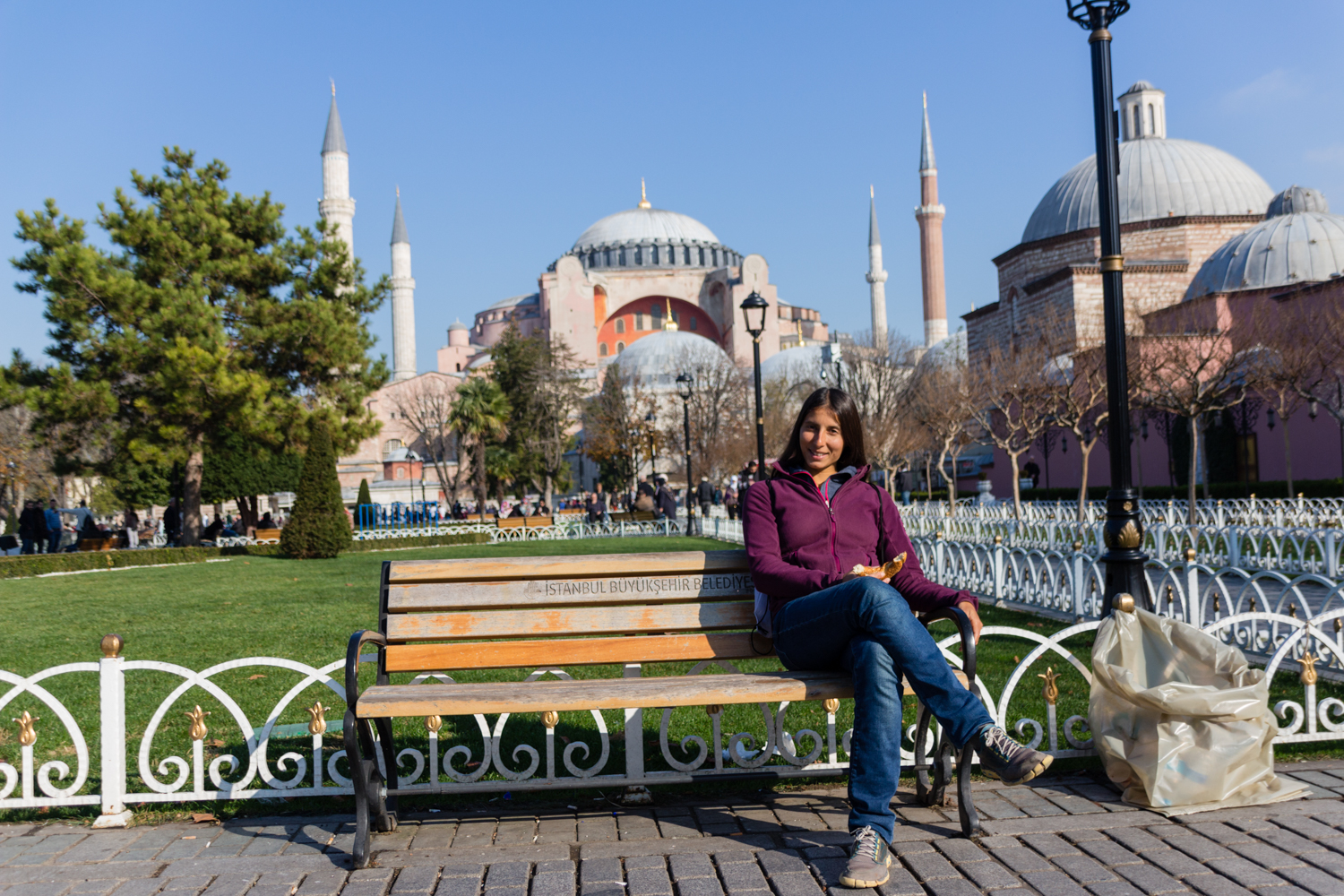 Enjoying a snack in front of the Hagia Sophia

That evening we went to fetch our fathers from the airport to kick off our Dads week! First on our itinerary was the Hagia Sophia – a truly impressive building which is an incredible 1500 years old! Passing through the massive wooden doors and entering the center court, the sheer size of this building is hard to comprehend. Marble pillars lead up to a central dome 31 meters in diameter, which is supported by pink, blue and white marble walls. The roofs and walls are lined with golden mosaics. First a church, then turned mosque and now a museum, the mixture of Christian and Islamic art and architecture is unique. When looking at it from outside, the pieces of history are put together like pieces of a puzzle on the building. 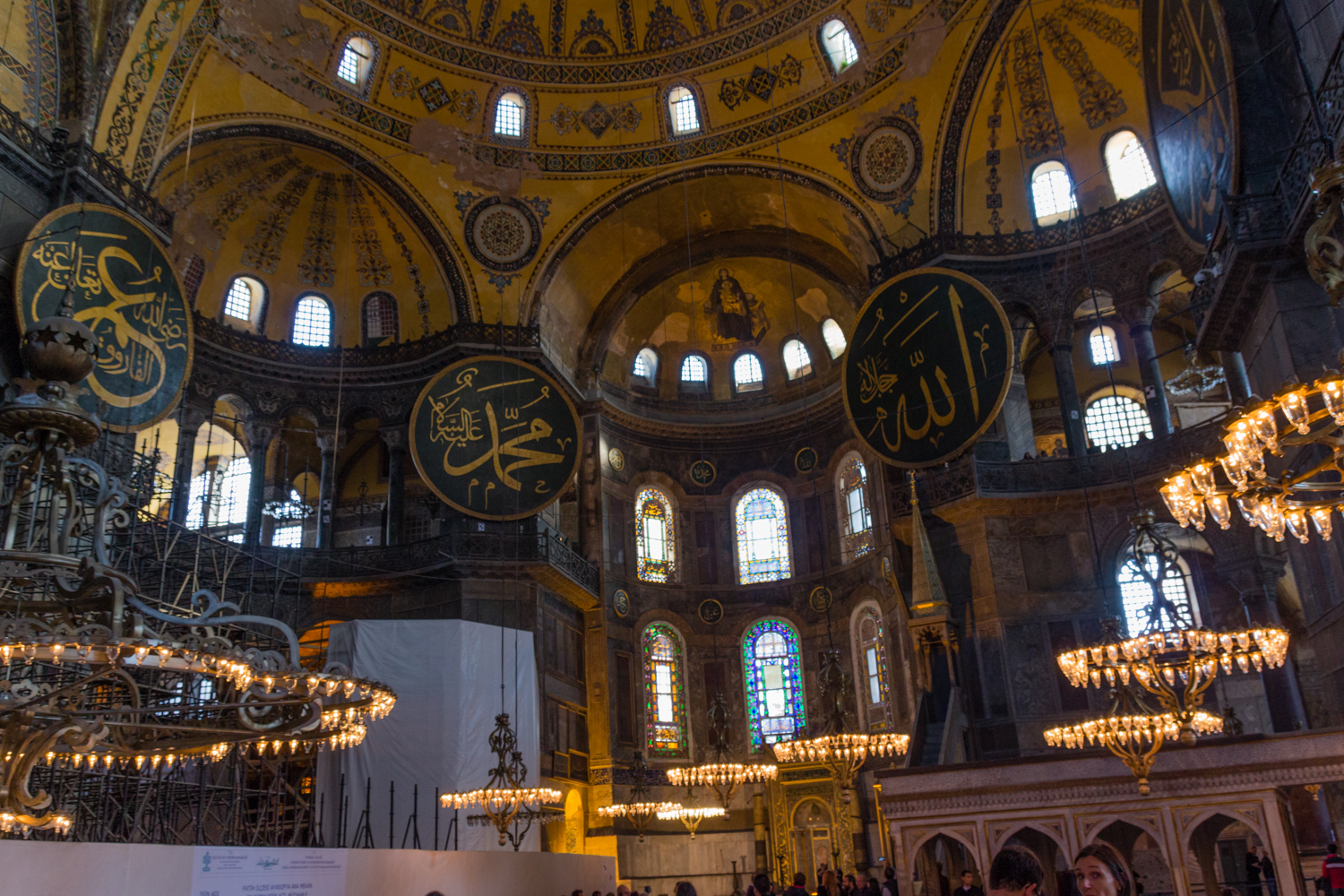 We walked 10 km that day, watching hundreds of fishermen cast their rods off the Bosporus Bridge and eating gözleme at the train station market. Afterwards, we headed to the colourful Egyptian spice market. We also got our first dose of the persistent Istanbul salesmen. Somehow, they all have a cousin in South Africa. Most of the time Tanya got “hola” and for some reason they always thought she was from Argentina… now that’s new. Simon and Hans spoke their local Swabian dialect to confuse them.. so we had our fun too. 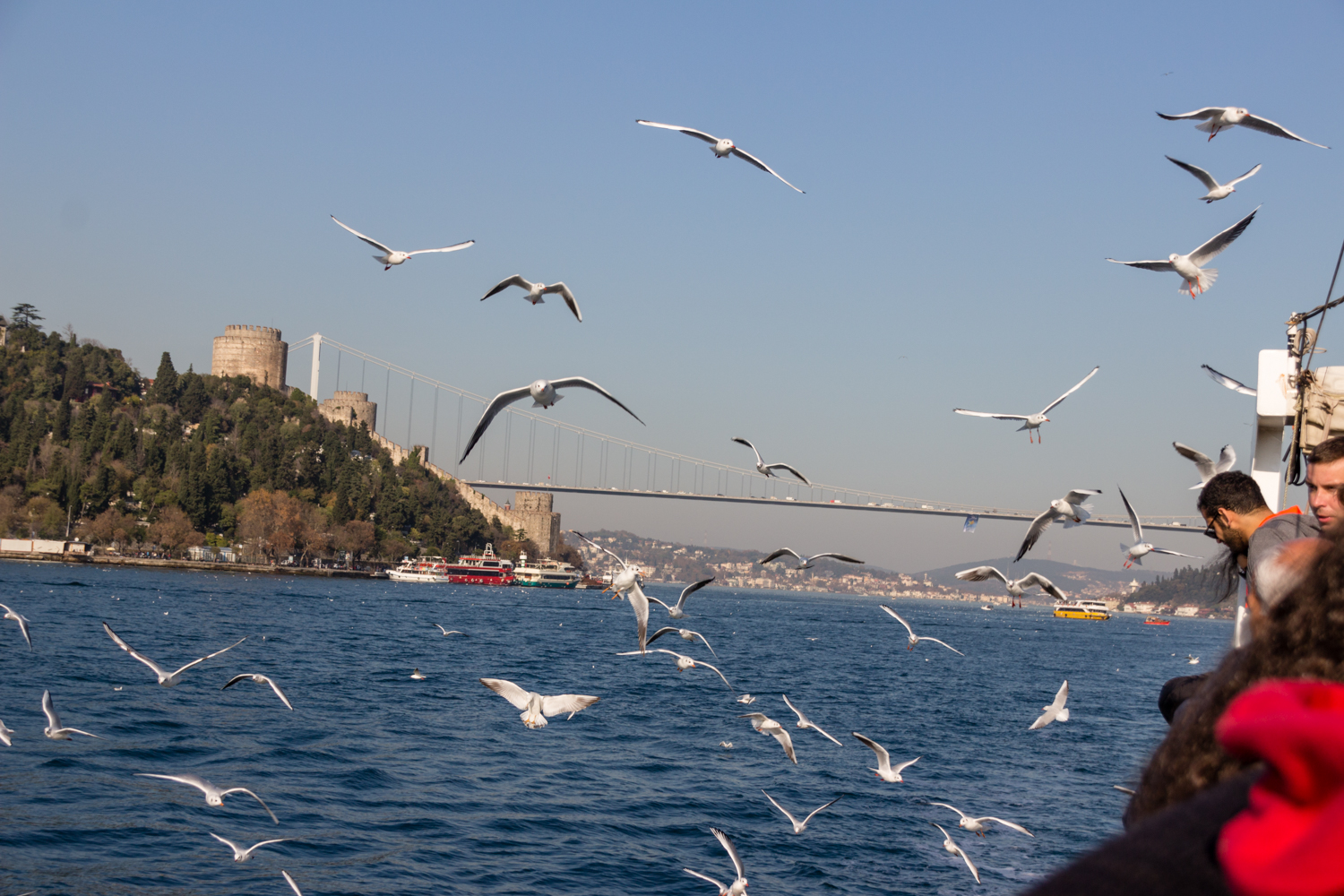 Seagulls flying next to us

The next day we took it a bit easier and had a boat trip along the banks of the Bosphorus. We passed many palaces and sites, watched people feed bread to seagulls directly from the boat and met some friendly Kyrgyzstani men. Tanya’s father, Eddie, told them all about our trip and they invited us to stay with them in their village if we ever cycled there. We watched the sun go down at the Bosphorus Bridge and tried to get up the Galata Tower. The district was packed with people going out and tanks and riot police were everywhere… Though this didn’t seem to phase a man and his badass dog on a motorbike. 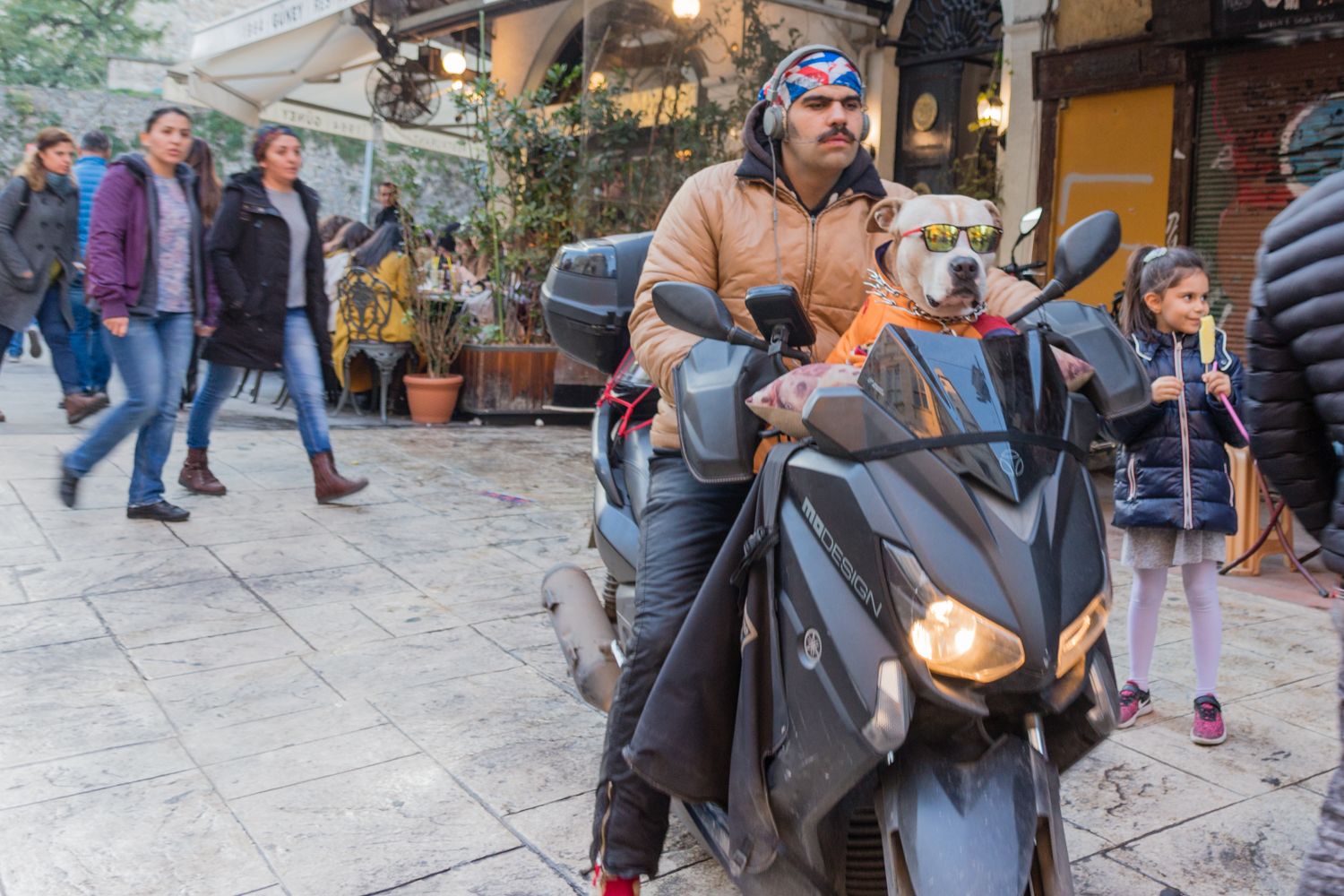 The underground cistern that was the water storage for Topkapi palace was another impressive building, with the heads of Medusa still standing and protecting their precious water supply. A crying column still cries tears for all the slaves who died building this cistern. 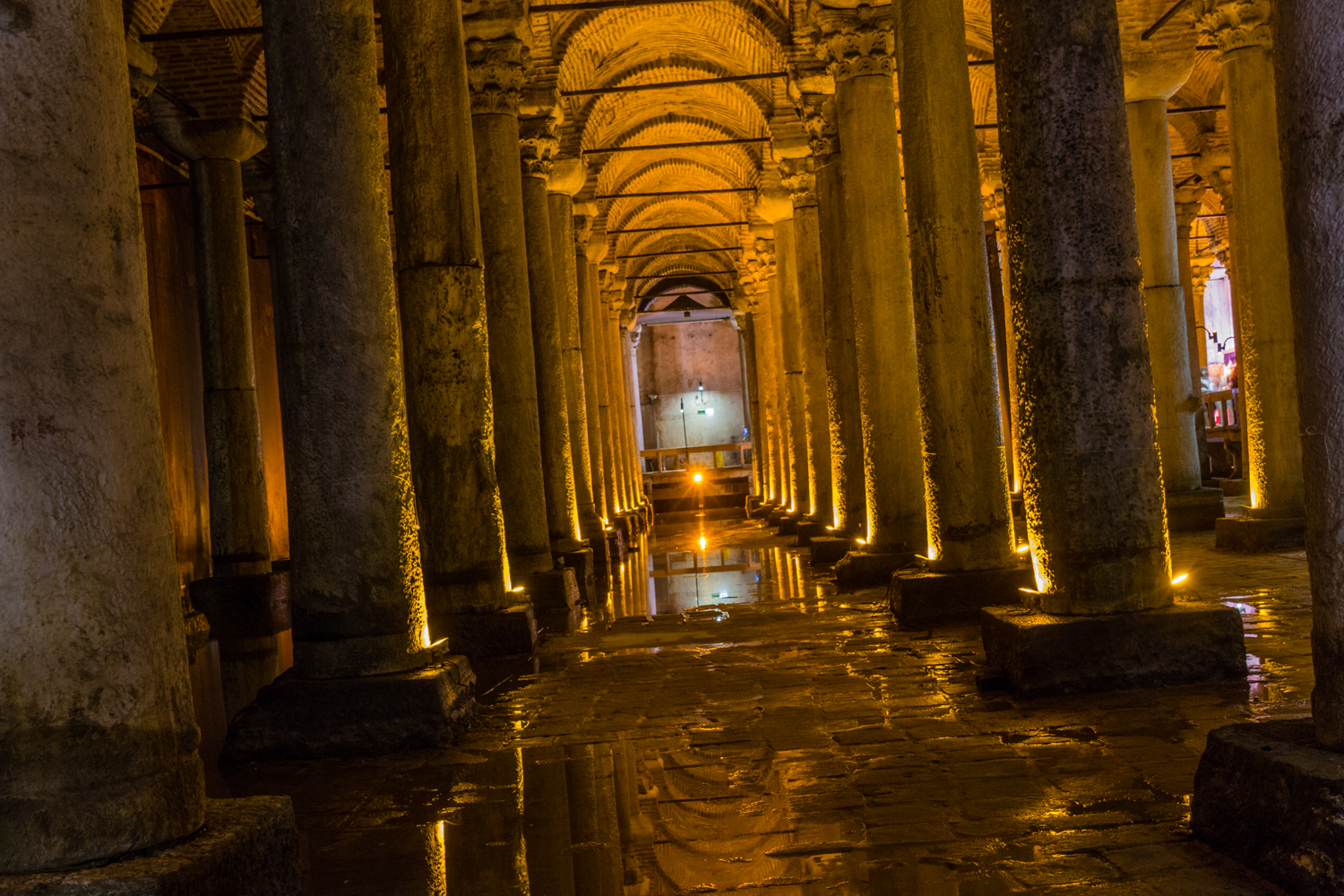 Underground Cistern used to supply water to the Palace

Across from the cistern is the Blue Mosque. This is also a beautiful and grand building, although built 1100 years after the Hagia Sophia. This makes the Hagia Sophia, in our opinion, much more impressive. 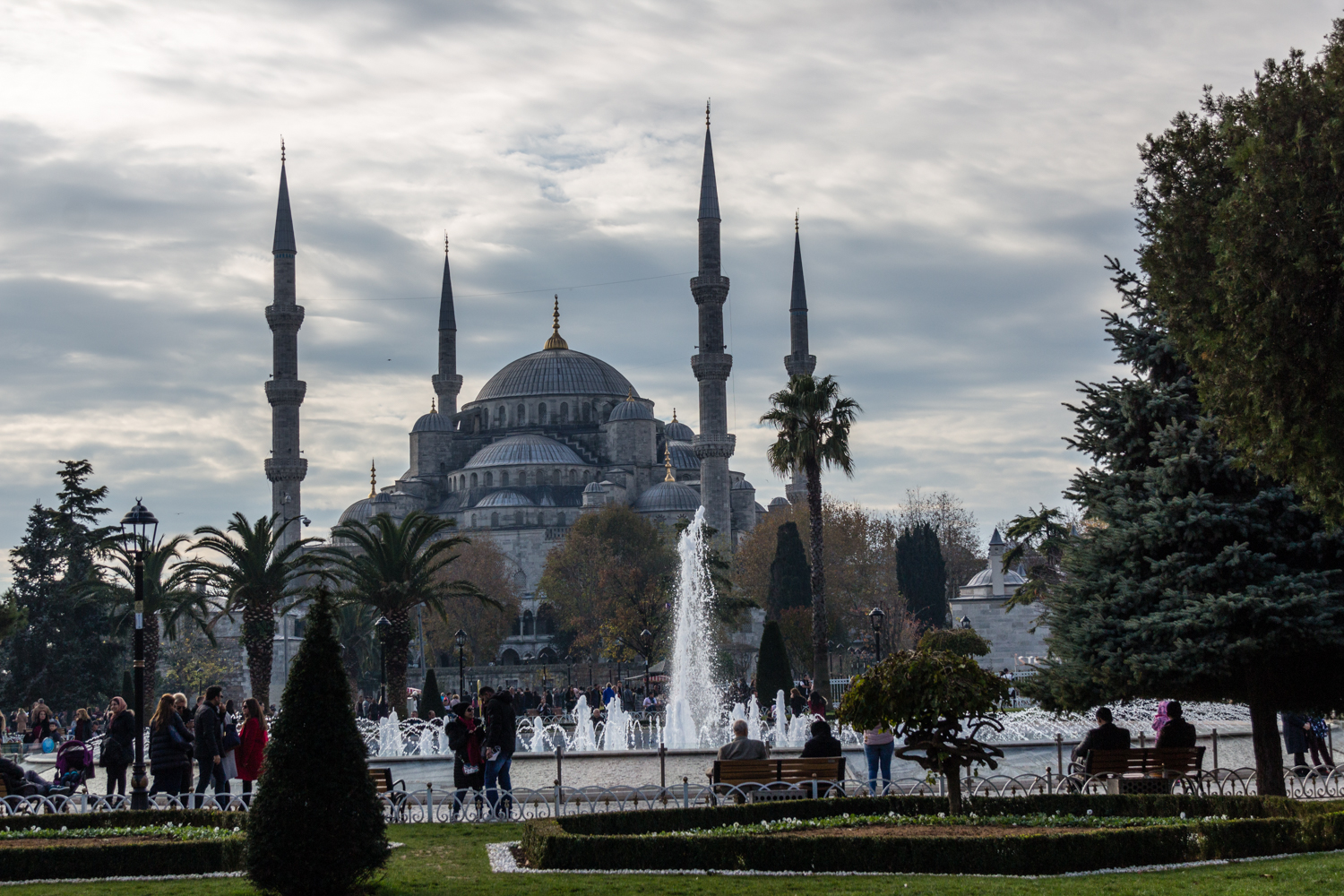 That evening we went to see a worship ceremony. The worshipers are known as Whirling Dervishes and wear tall hats that represent their egos. They meditate by revolving, keeping their left palm facing downwards to reflect on themselves and their right hand up to receive wisdom from above. The singing and traditional instruments sounded heavenly and we were hypnotized by their flaring white skirts twirling to melodic voices. 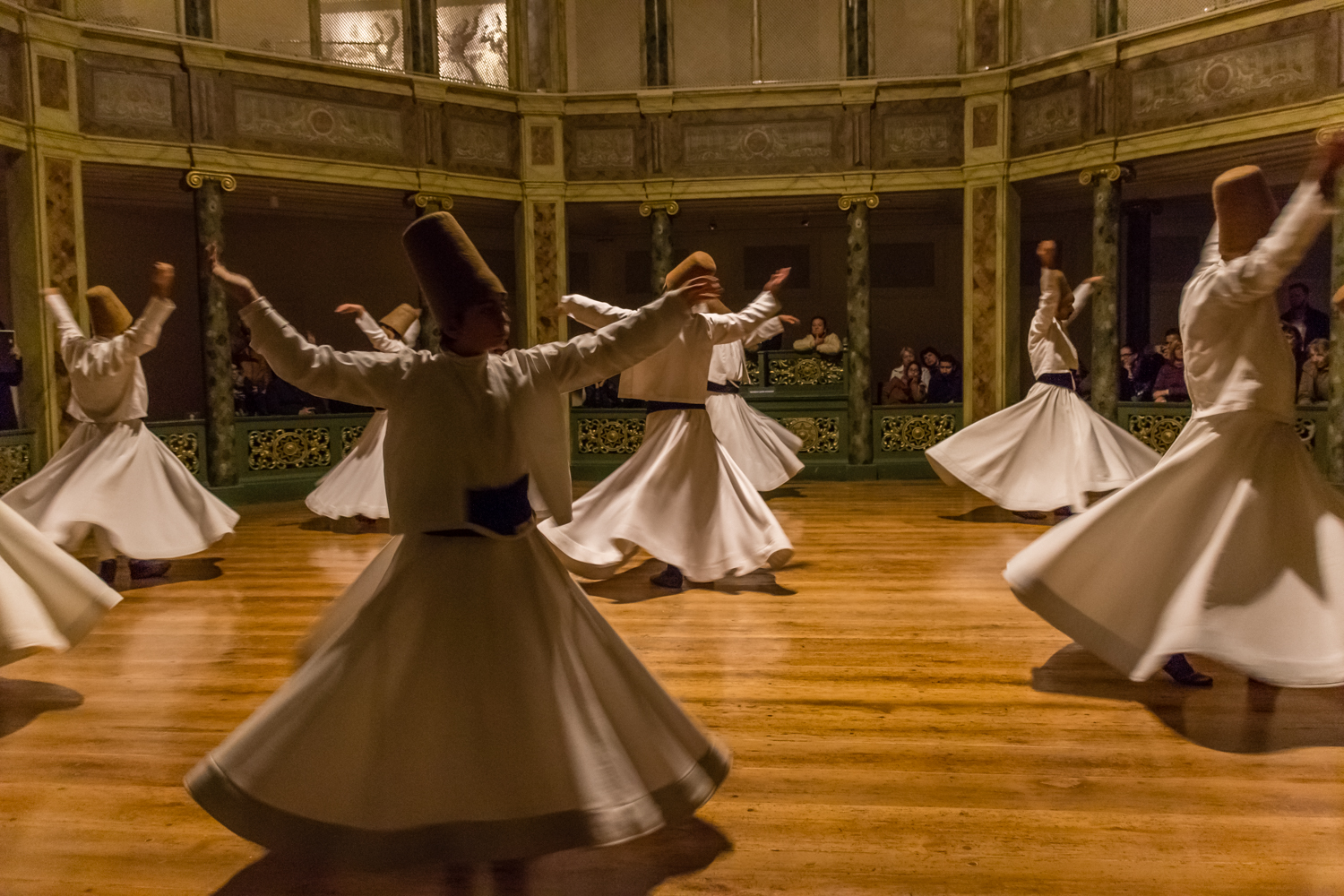 We then ate a delicious meal at a vegan restaurant called Community Kitchen. The owner was so warm and welcoming and her food just melted in our mouths… it felt like we were being served in someones cosy living room. She also saves cats from the streets and we played with some of them. 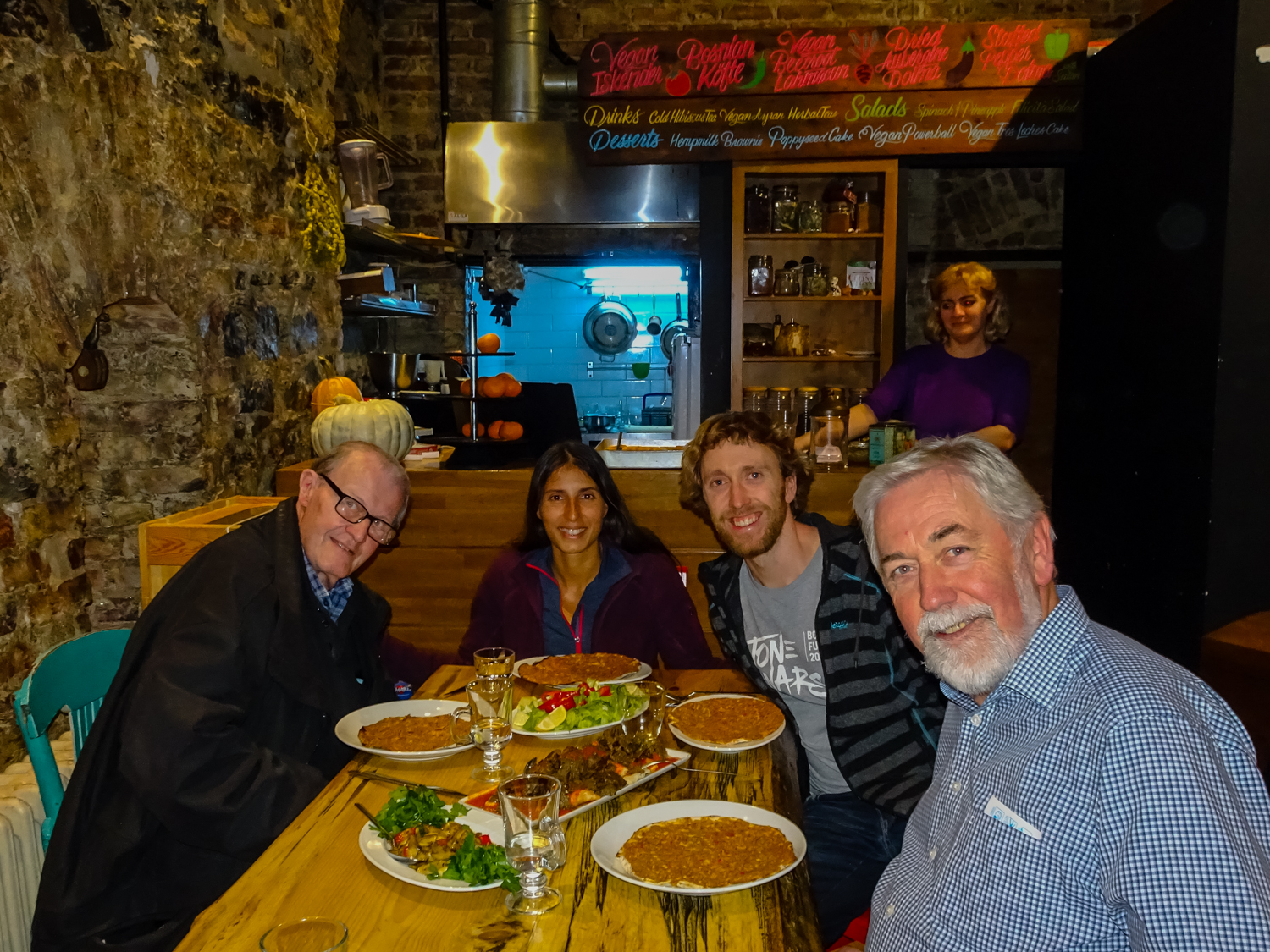 We also got to visit Topkapi Palace – the living and working quarters of the Sultans (Kings) and their family. It also includes a large Harem where the Sultans kept their women slaves.

We  spent the next day at the Archeological Museum where we saw many elaborate sarcophagi but unfortunately missed out on Alexandria the Great’s sarcophagus. Also there, was the peace treaty after the Battle of Kush, carved on a stone tablet. We learned about the early human settlements of Istanbul and the merchant ships that were recently discovered here. 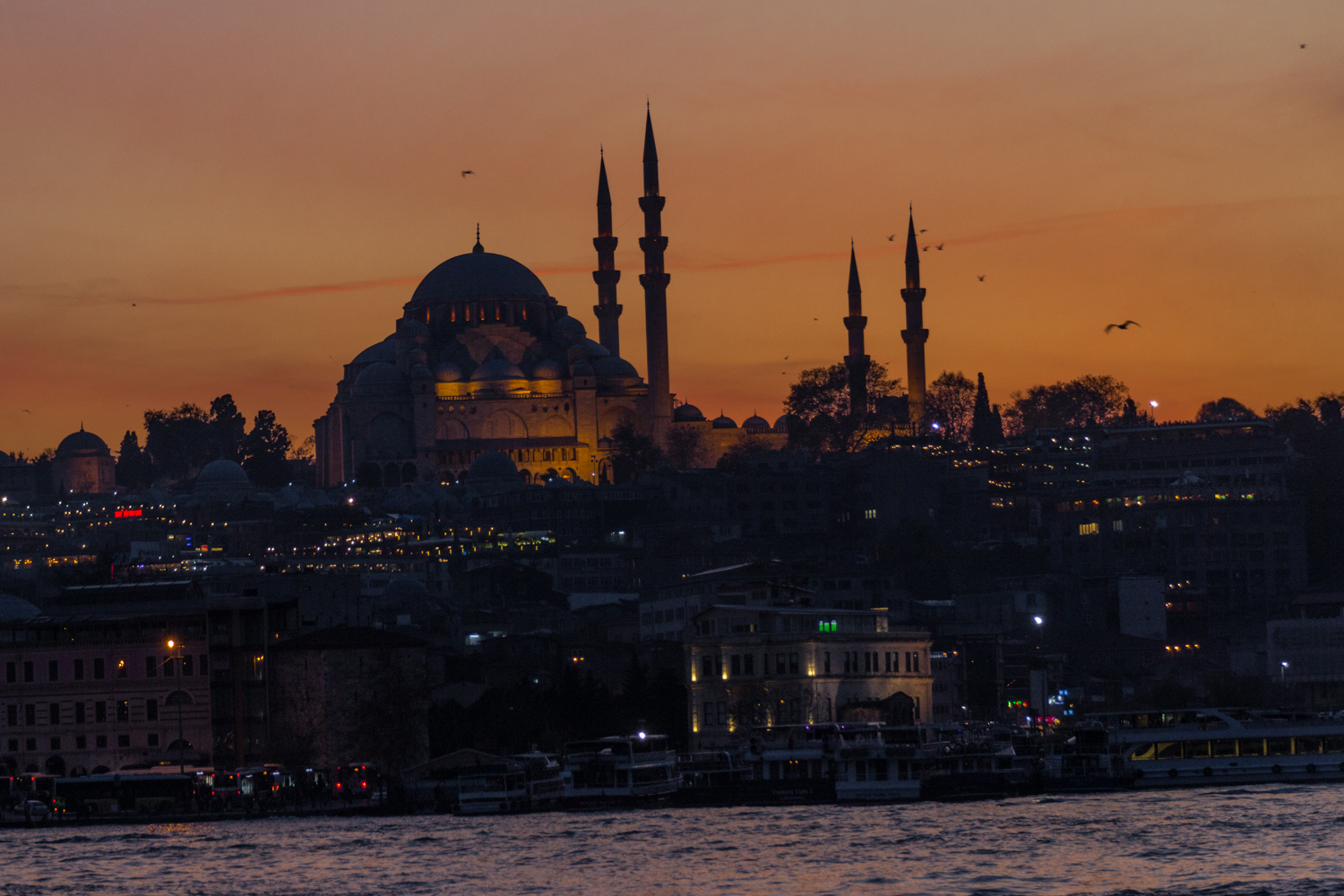 Watching the sunset from the Bosphorus Bridge

Back at the apartment, we were getting our bikes ready and fitting our brand new shiny tires on when BANGGG! A large explosion rang through the apartment building and our ears. Tanya’s tire exploded next to her. She could hear nothing for some seconds and then just ringing. Eventually, the hearing came back and the pain went away… the tire survived but part of the edge was destroyed. Let’s hope it survives in Africa. Pumping up the tires after that was a lot more nerve wracking! 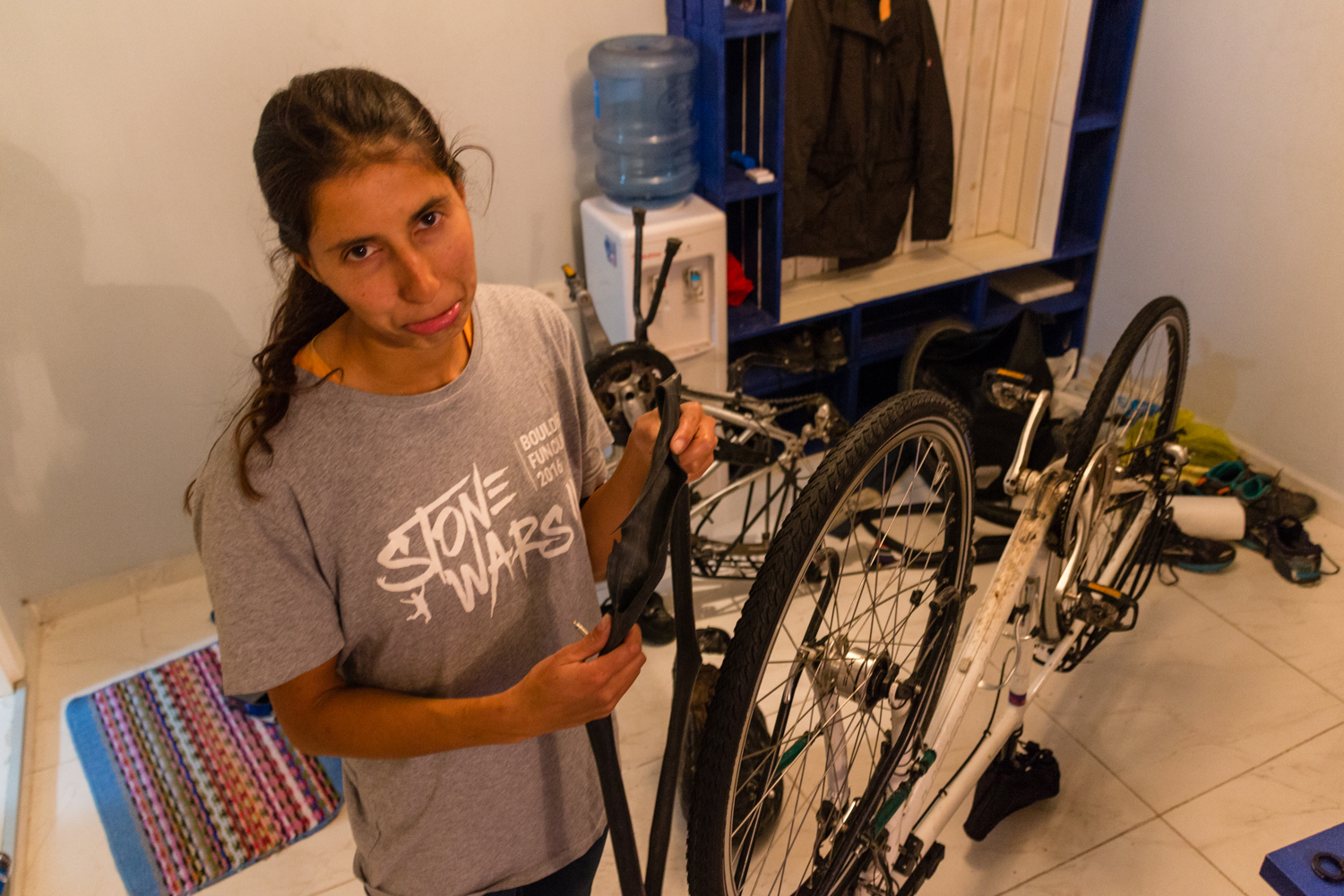 We finished our last day of Dads week at the city walls, visiting the Chora Church with exquisite mosaics and had some yummy Çig Köfte. We saw the Patriarchal Church and the Süleymaniye Mosque and browsed around the colourful Bazaar before heading home. We all enjoyed one last meal out before it was time for Hans and Eddie to fly home and us to fly to Cairo. Thank you Dads, we had a fantastic week! 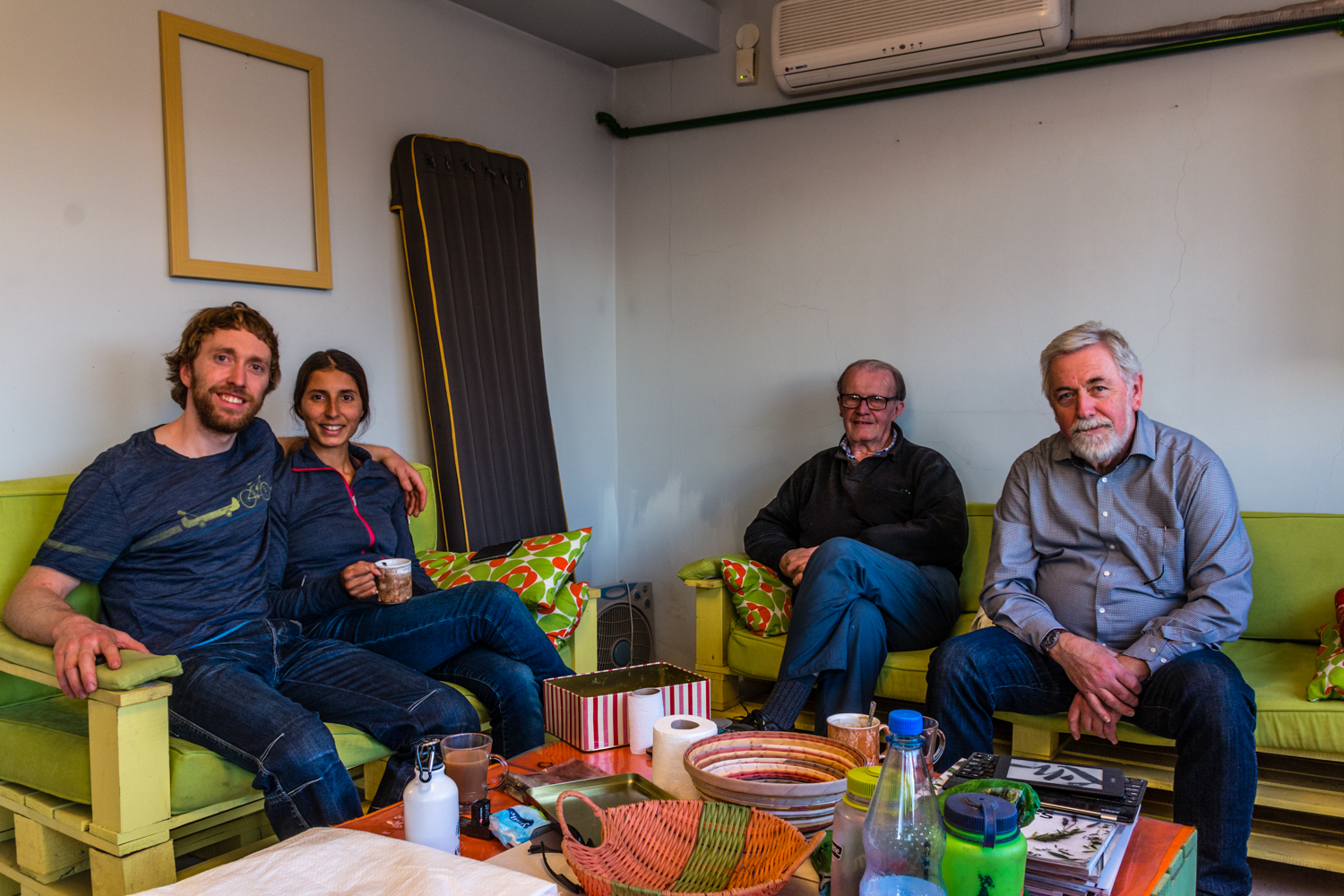