Turkey. We didn’t know what to think about this country. Tensions have been high between Germany and Turkey in recent months and there was a handful of reports in the media of Germans being rejected at the border without any reasons given. We had been planning and looking forward to Turkey for a long time and as Simon is German, we were anxious when we took the ferry over from Kos to Bodrum. Fortunately, everything went smoothly and we weren’t treated any differently to other passengers. Within 15 minutes we were through passport and baggage control and free to enjoy our ninth country. 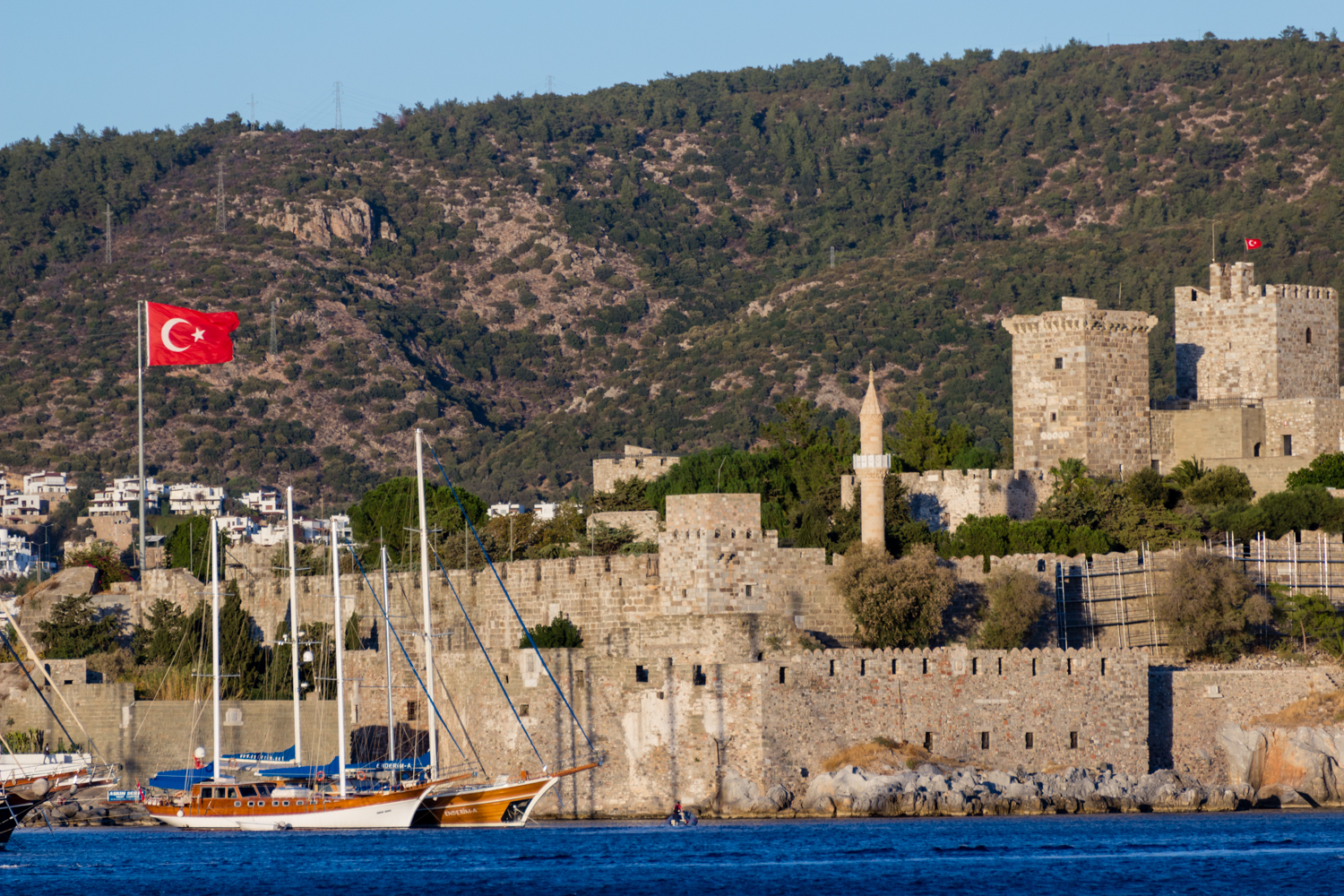 We cycled to a campsite in the very hilly city of Bodrum and passed a hell of a lot of stray dogs in the city at night. Unlike Greece, the stray dogs in Turkey are well-fed and in better condition. They are also massive and cycling passed them can be scary, though most of them don’t do anything. However, we have heard horror stories about the dogs in Turkey, so maybe we were lucky.

The next day we started our stretch towards Antalya along the coastline and we were immediately struck by how hilly Turkey is! The roads are steep and the smaller country roads have a bumpy surface that looks like gravel mixed in with concrete. These last two factors can make a world of difference and cycling here was exhausting. However, the smaller roads are interesting. On one of the mountains we stopped at a stall that made hand-carved wooden spatulas and the most amazing fig jam we have ever tasted! 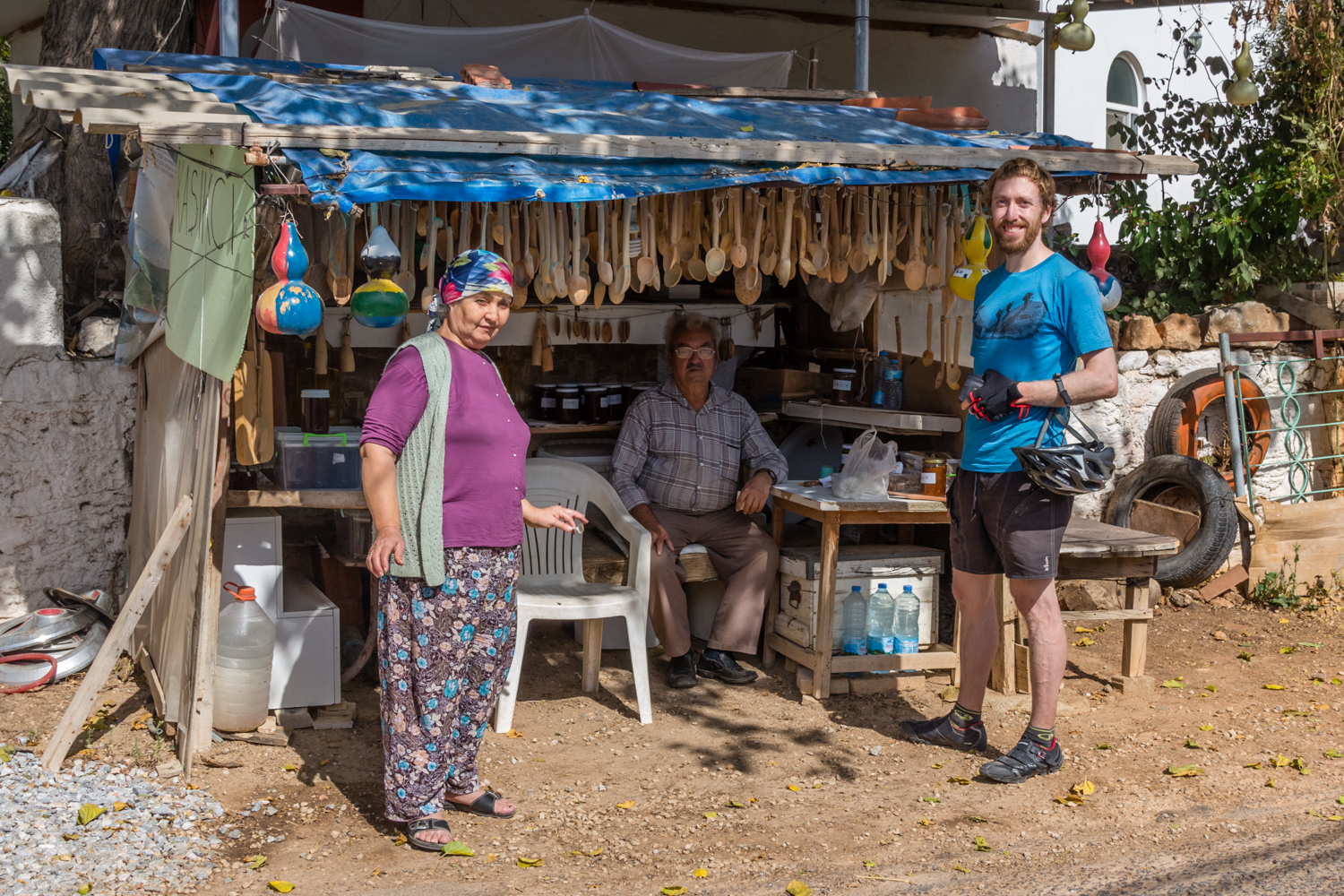 Spatula stand in the middle of nowhere

Shortly afterwards we stopped in a mountain village and a massive stray dog came up to Tanya. She was super friendly and was following Tanya around. When we had to leave, though, she continued to follow us on the bikes. We decided to outrun her by speeding down the mountain but when we got to the bottom a kilometer later, we had to immediately climb up another hill… We looked back and low and behold there she was, tongue out, panting but still running after us. We measured her speed downhill and she was casually running alongside us at 30 km/h. This just shows: you cannot outcycle a dog. Don’t even try it. 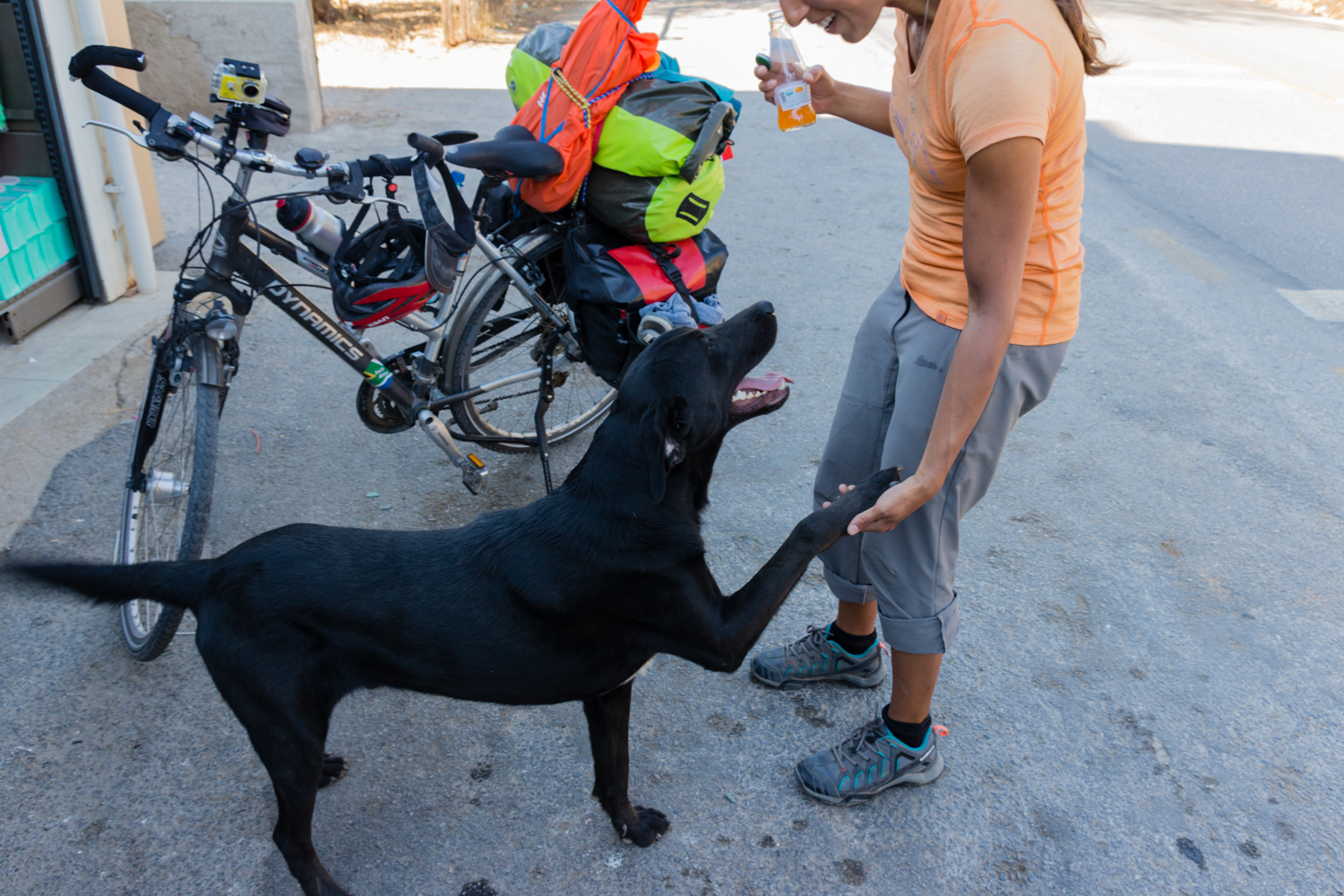 She followed us for another kilometer and then we had to be really mean. It was best for her to stay in the village to get food, and so Simon did the heartbreaking task of shouting and throwing stones at her so she would make the decision to turn around. It was a really sad sight, but the best for her in the long run. Later that day both of us found two stray kittens at the same time… we stopped to play with them and reluctantly had to leave again, trying hard to resist putting them in our handlebar bag and taking them with us. We will just have to buy a van, do the same trip again and collect all the lovely animals we met along the way. 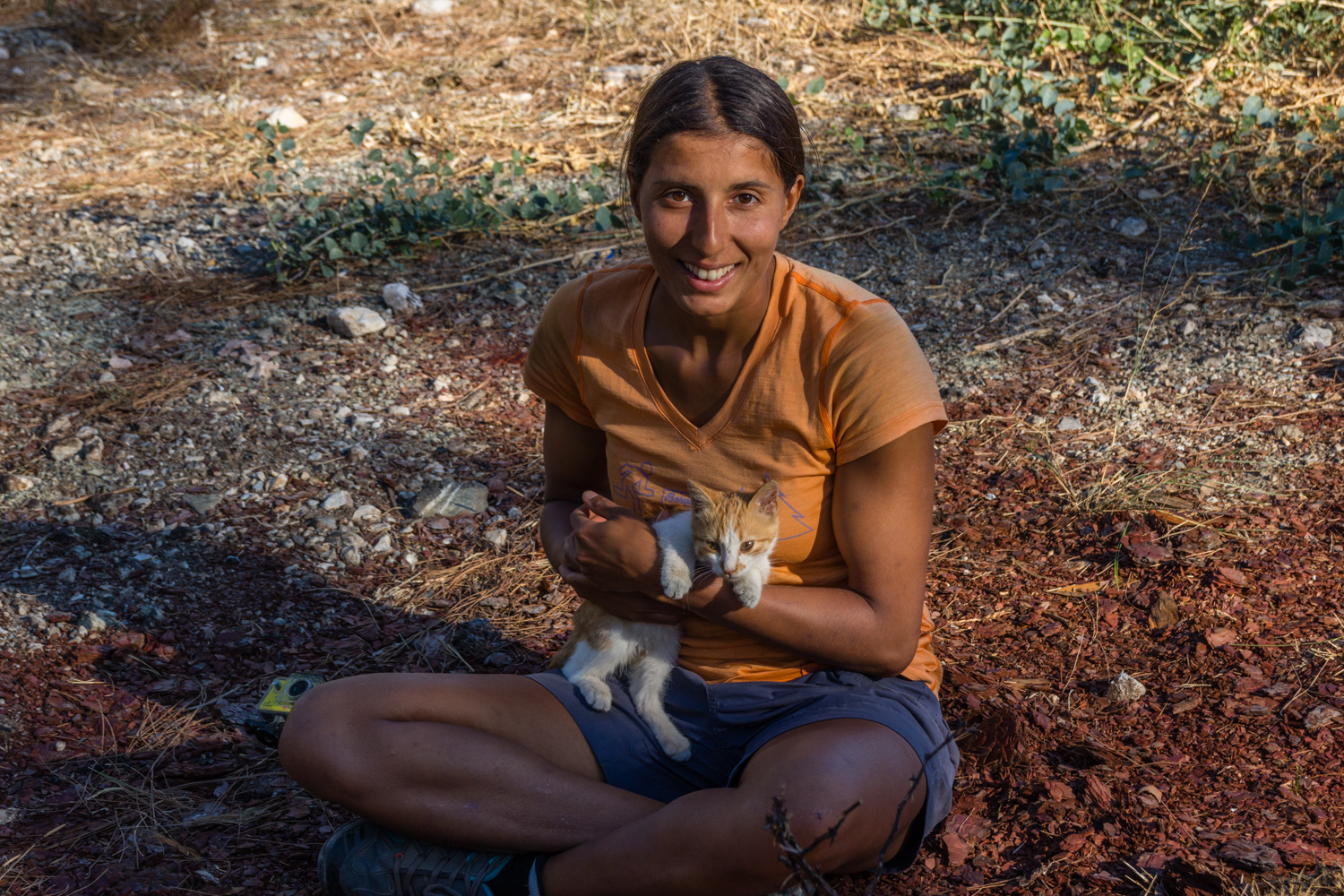 Playing with some cute kittens on the way

We cycled to Akyaka where we hit the D400 highway and left the bumpy road behind. Cycling on this smooth tar felt like flying and we had a much more comfortable ride to Fetiye, a very pretty town with a beautiful bay. We stayed in a campsite there with a free washing machine and a view of the Bay.

Shortly after Fetiye, the D400 split into two and when we got to the junction it was clear why. A tsunami of a mountain stood in the way. We avoided the mountain, followed the road and stopped for lunch at a bus stop that had a fridge with ice cold water. The fridge had seen better days though. Another favourite picnic spot in Turkey has been mosques. They usually have a nice picnic table, access to water and toilets and we stopped at one at least once a day. 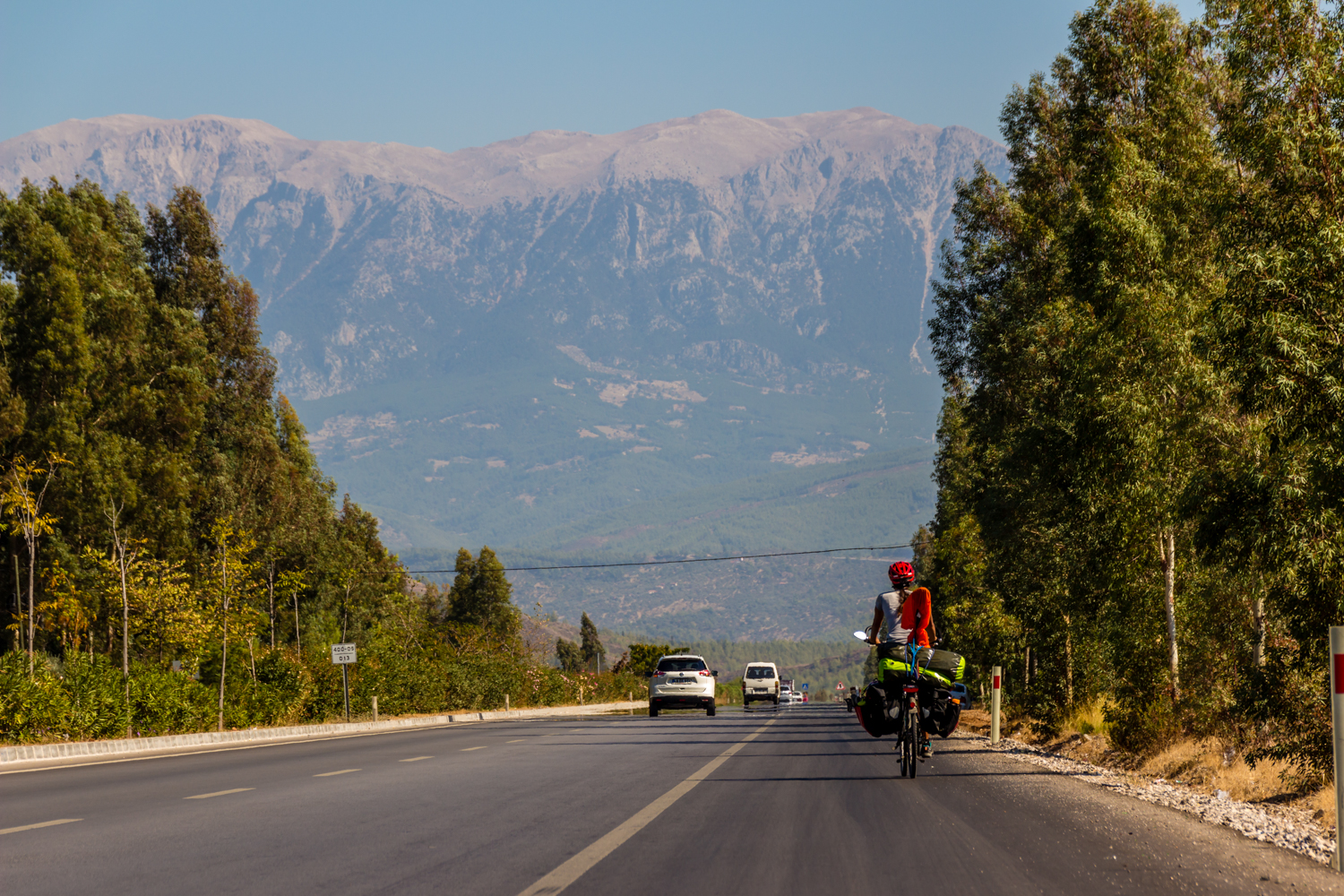 Tsunami of a Mountain

After the refrigerated bus stop, we cycled through a tiny town called Esen where we were quite a tourist attraction. We passed a group of older men and one insisted that we sit down for ‘chai’ while another was laughing out loud at his friend’s determination. A few teenagers were also fascinated by us… running behind us and watching us from a distance. 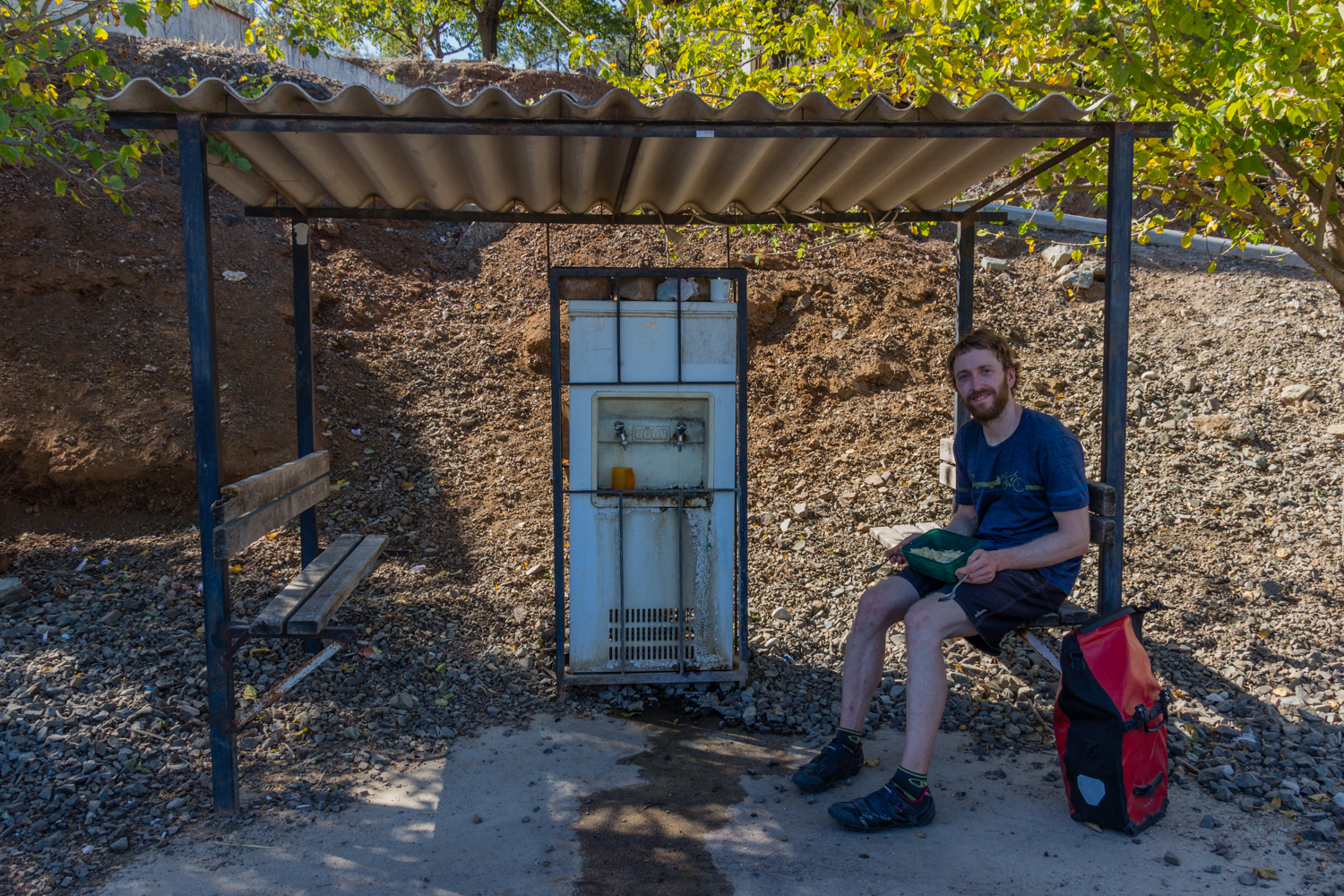 We cycled on to Kas where we decided to get some yummy Turkish food (spinach and tomato pide) in our bellies and have a rest day. The weather forecast looked terrible the next day so we stayed at a great B&B (Meltem Panisyon) and spent the day in their cosy roof terrace. It was a good decision because there was so much of rain the next day that the roof terrace got partially flooded. We also enjoyed a delicious buffet breakfast there… did we mention we love Turkish food?

Coming out of Kaş we climbed a large hill and ended up doing 1000 m in elevation that day. A policeman stopped us on the way up and told Simon he was crazy. When he saw Tanya, he immediately started speaking to her in Turkish and was shocked when she said “no Turkish”. He said, “but you have the face of a Turkish person.” He naturally assumed Tanya must therefore be ‘normal’ and why would she do something as crazy as this German guy? He was really friendly and joked that he can stop a car to carry us and the bikes somewhere. 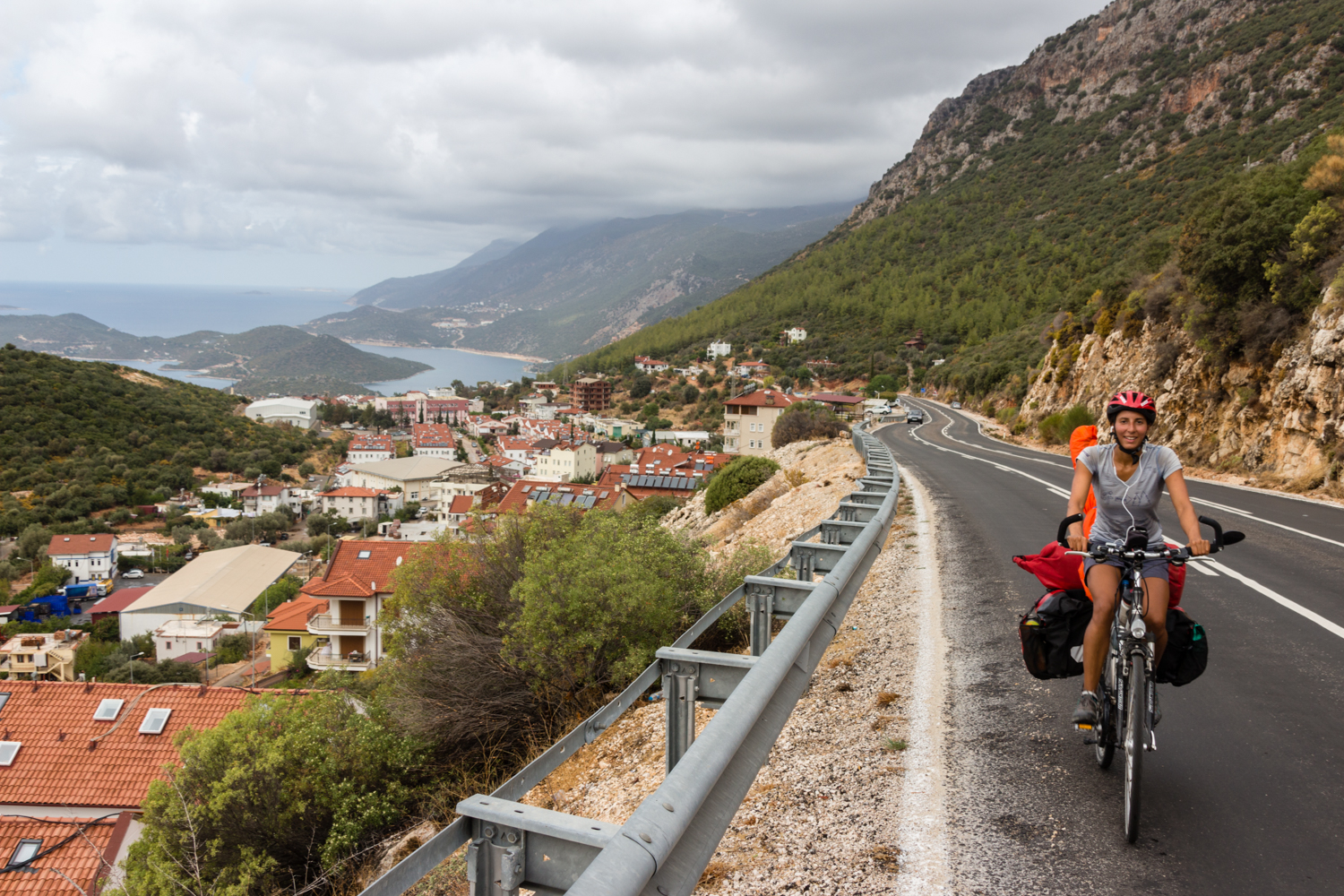 Climbing the hill out of Kas

We declined his offer and made it to the top of the mountain. We were also lucky with the weather again – we never felt a drop of rain, even though it was forecast. We descended into the city of Demre, where the church of the Archbishop St. Nicholas stands. St. Nicholas is the person Santa Claus is based on, as he used to give out gifts to local children at Christmas time. It is not the only historical monument in this area. Just behind Demre are some ruins from the ancient city of Myra, which is around 2000 years old. Tombs carved into the rock and its huge amphitheater can still be seen today. Unfortunately, most of the ancient city is now covered with tomato farms and the much less impressive city of Demre. However, the ruins of Myra are not the only ruins around and we saw many while cycling through the Lycian area of Turkey. Sarcophagi randomly line the center of streets or the side of the road. We also saw several cliff faces with tombs carved into them while passing by. 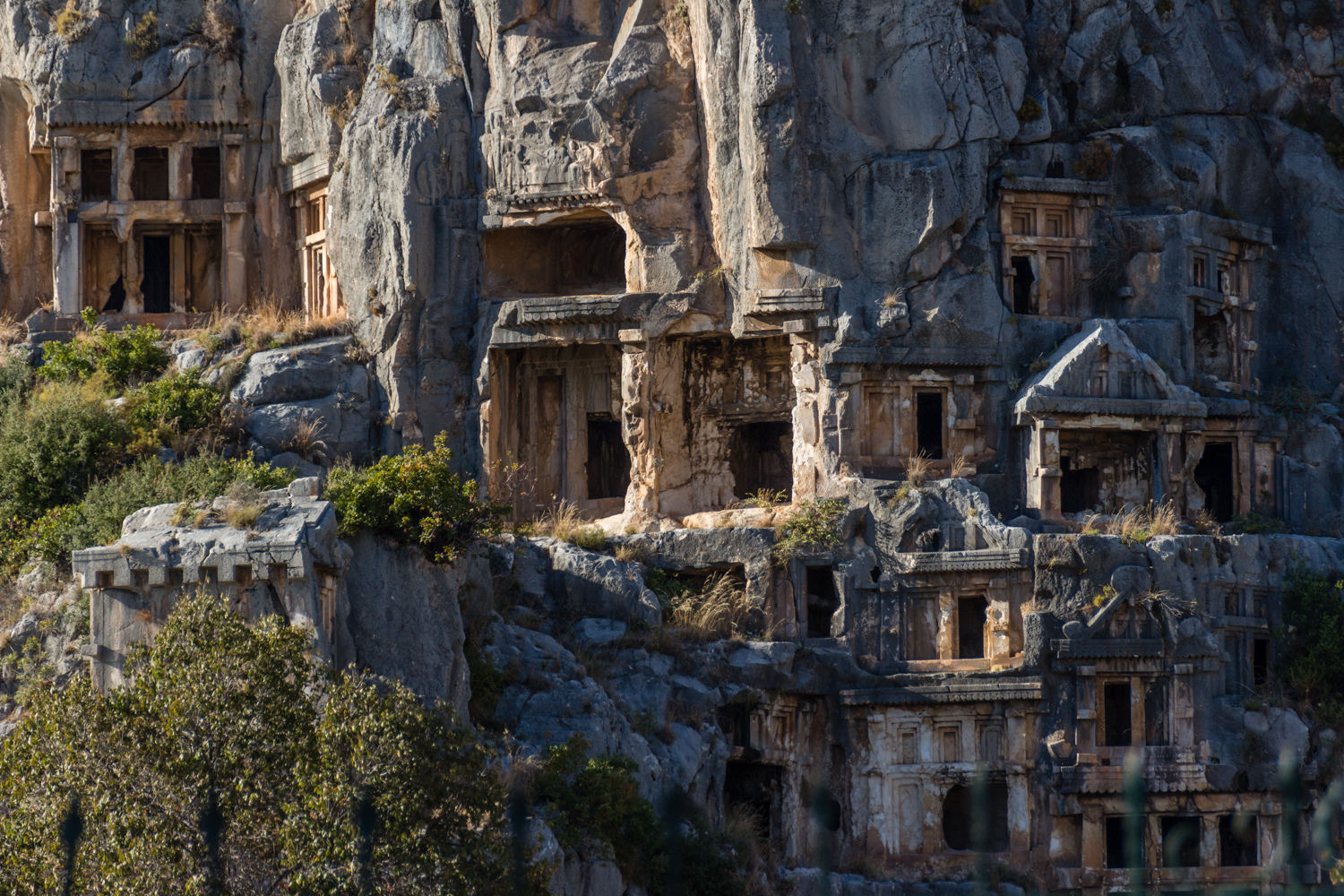 We camped on a beach outside of Demre and continued along the coast but not before first meeting an interesting character. While stopping for our pre-lunch snack, a man came up to us and talked in Turkish as if we understood it. We made it clear we didn’t speak Turkish but he continued anyway, clearly dumbfounded by our bicycles, gear and what we were doing. Even though we didn’t speak a common language, we could somehow understand the basics. He wanted to feel how strong our muscles were and even got us to arm wrestle (don’t ask who won). When Simon took out the dishcloth to dry the coffee pot he started laughing at him. Clearly his wife does that sort of thing at home. He then tried to give us directions to the next city by drawing – with a pen – on the table. We said goodbye and a few kilometers later, we saw a car being used as a crane to lift a large window up to the third floor. Besides the window, there was a loaf of bread attached to the crane because you know, why not? It was an interesting start to our day. 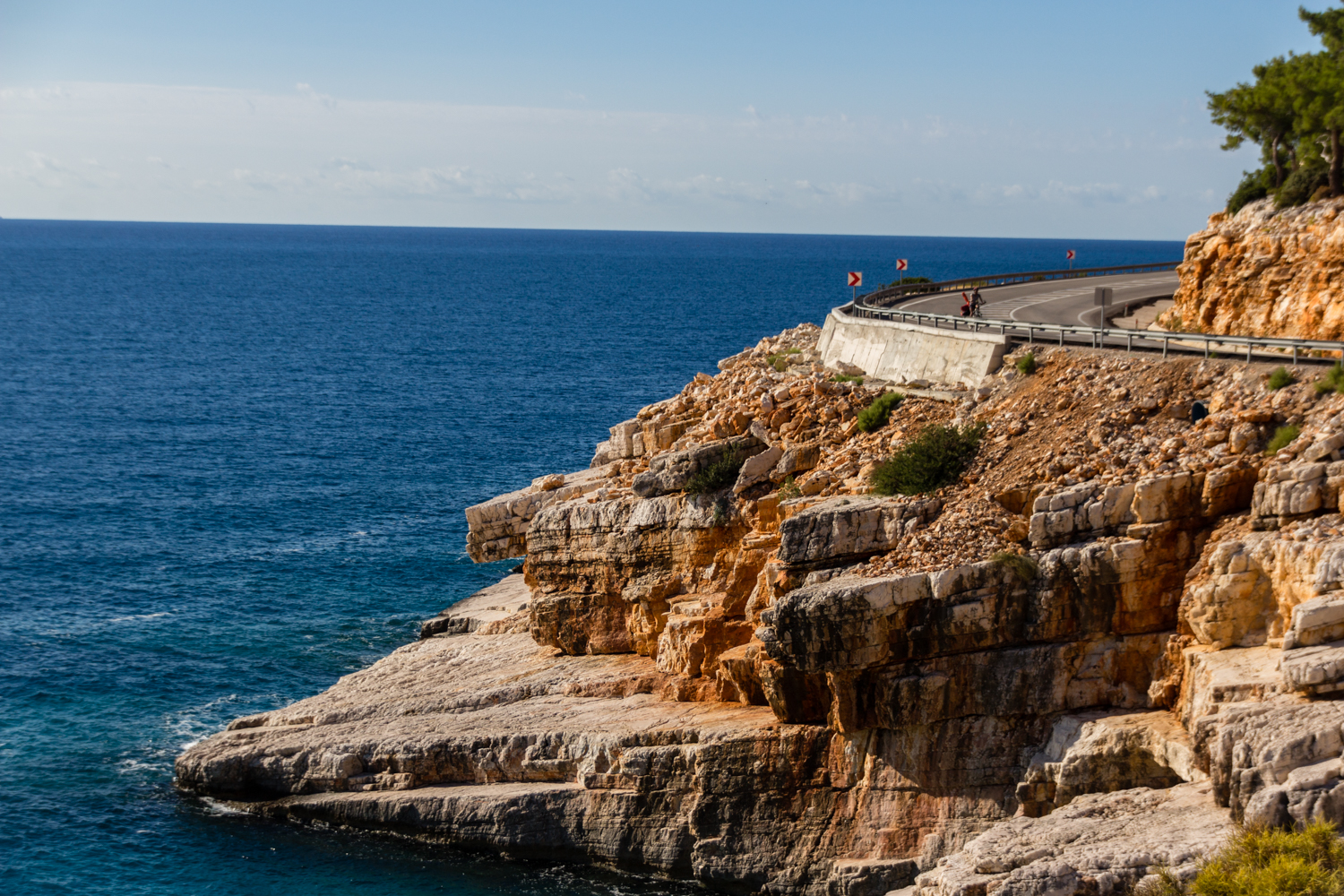 The part of the coastline ahead was the most beautiful stretch of our journey in Turkey – from Demre to Karaoz. It had beautiful, deserted beaches probably thanks to the fact that we were there in off season. We stopped at a beach for the afternoon and enjoyed a dip in the ocean, some coffee and food while relaxing in the quiet surroundings. We then tackled a couple of more hills and enjoyed a stunning red sky before arriving in the valley of Olympos. 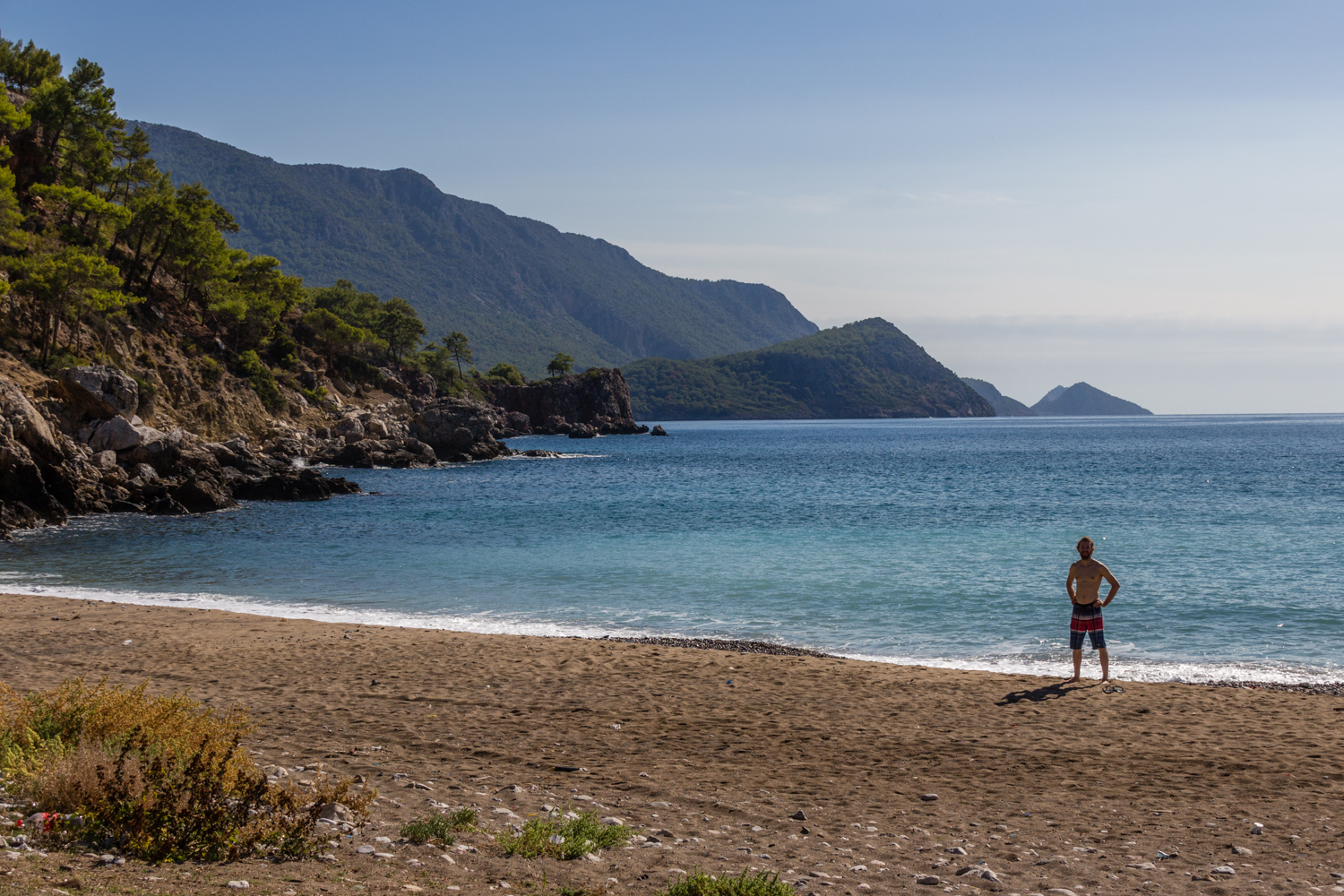 Enjoying the water at a deserted beach