We spent the last two days cycling from the Nile (Qena) to the Red Sea (Safaga). As soon the city changed to desert, the first thing we noticed was the quietness. It was bliss. We really enjoyed the Nile, but our ears need a break from the constant hussle and bussle before we return.

Of course, the loud engine noise of our police escort was right behind us. A while into the desert, we changed escorts and an officer with an eagle on his shoulder (very high ranking) came out of his vehicle to greet us. He then proceeded to say, “Look, listen to me… The desert is very dangerous. There are Arabs in the desert… very dangerous. Do you know what I mean? For the next 17 km, I would recommend that you put your bikes in the vehicle.” It’s very coincidental that the next 17 km was the stretch he would have to escort us. 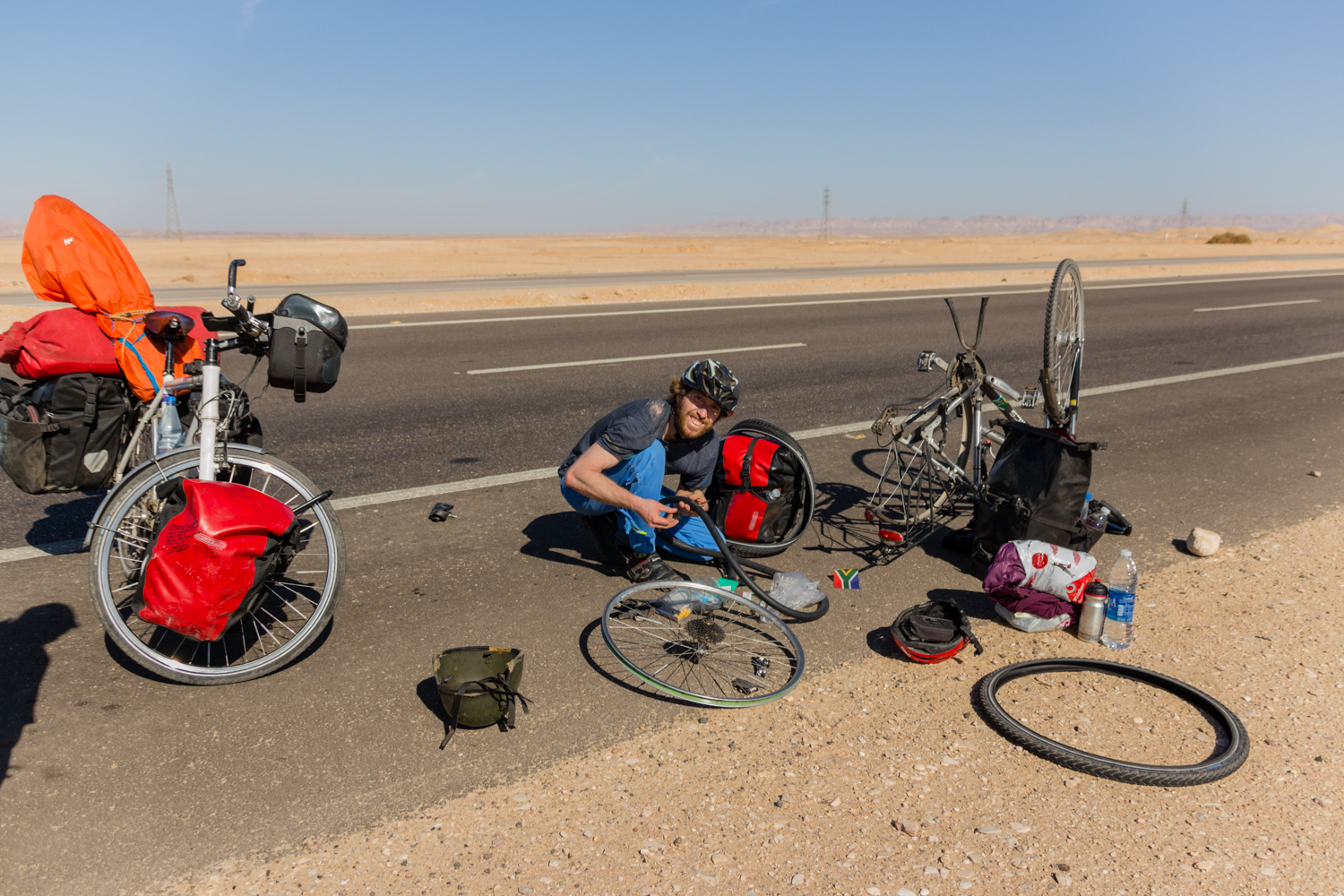 Replacing a tire in the desert

When we said “Maybe later”, his eyes got big and he said “Really? Promise?”. He misunderstood us and we made it politely clear that we are cycling the full stretch. After giving us a nod, we got on our bikes and cycled off. Both our old and new convoys followed us for a short while… the first time that two convoys ever followed us. This made us think, “Oh, shit – maybe it is dangerous”. This was until, 1 km further, they turned left to a nearby coffee house and left us completely alone in the desert for the rest of the day. Either this is such a dangerous stretch that they didn’t want to risk their lives here, or they couldn’t bare the excruciating task of following us and tried to use danger as an excuse. 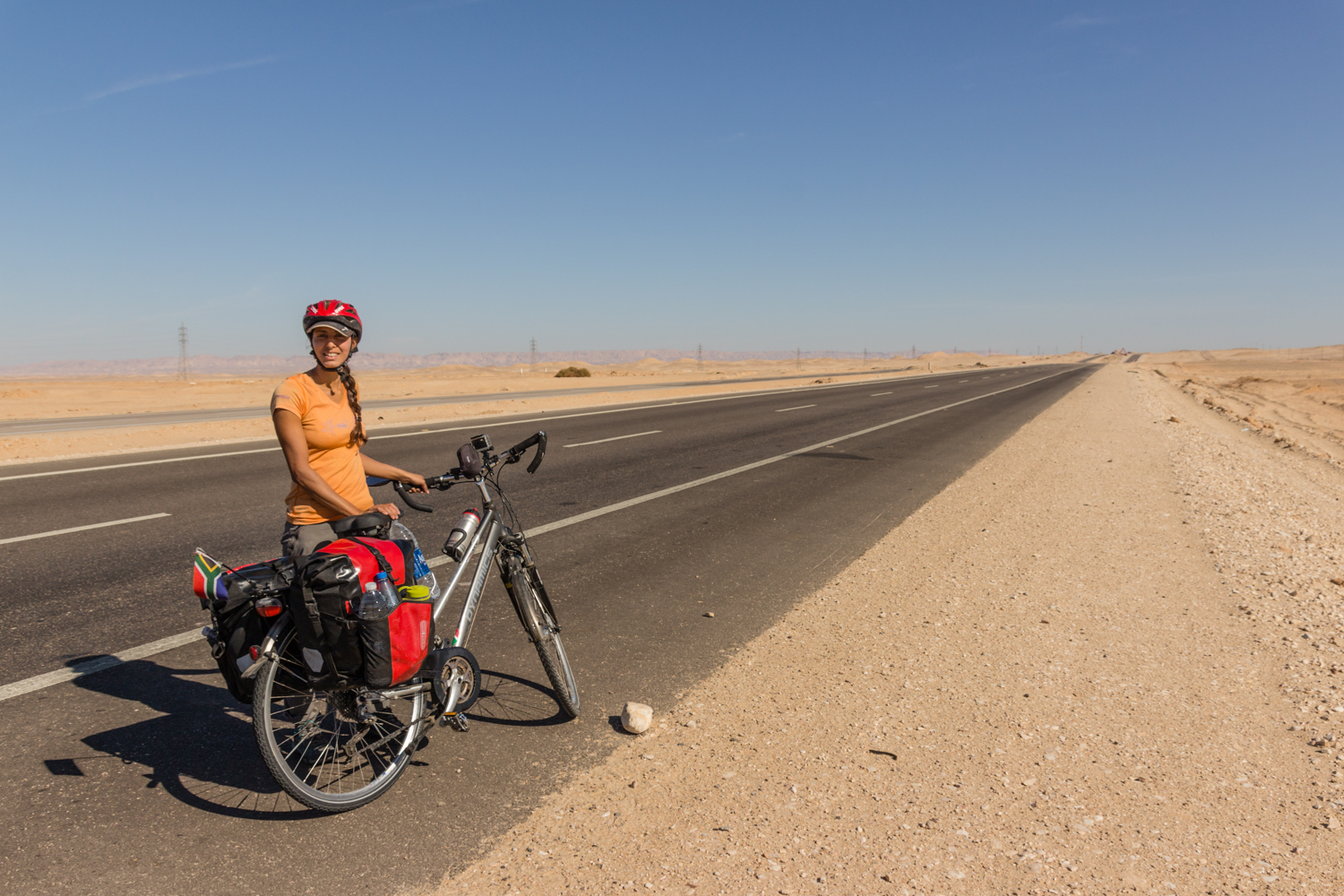 We were very happy that they left us alone in the desert. We were still fighting the headwind that had been blowing from the morning and it was only getting stronger. The road gradually inclines for 110 km up to 700m in elevation. With the uphill and headwind, we could only go between 12 and 15 km/h. We really had to fight hard for the last 15km. We were glad when we reached a small village with restaurants and cafes, after 86 km. 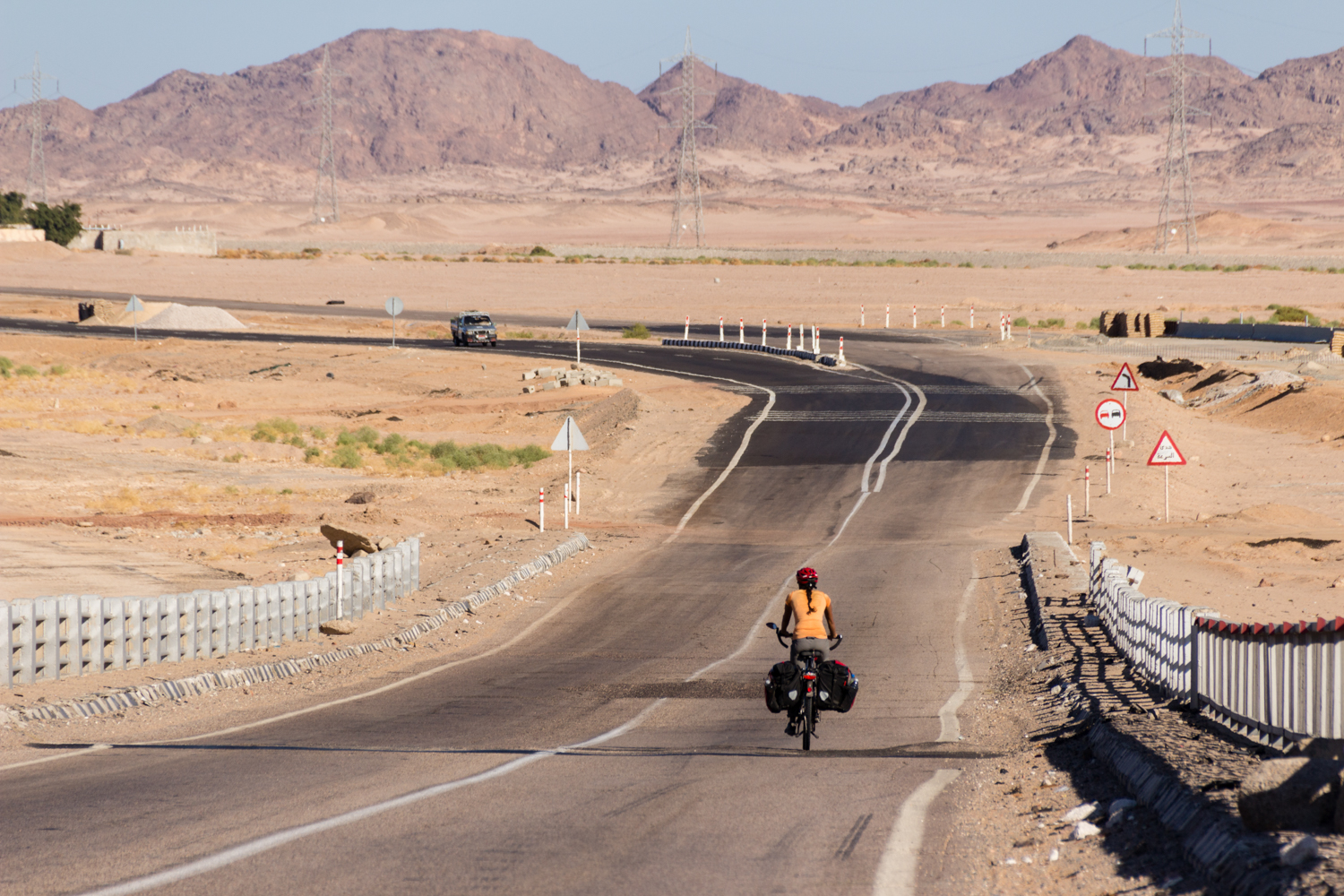 We tried to ask if we can camp at a restaurant there but we got a similar response as our first night on the Nile: they would love to help, but they would get in serious trouble with the police. A lot of people are scared to host tourists.

It was clear, the only place we were allowed to camp was at the police station. Hooray. The police were still babysitting us at the restaurant anyway after we had got to the town.

They let us set up our tent in the police quarters where all the young boys who were in training stayed. Afterwards we went back to the restaurant where they let us eat our Koshary takeaway (prices are apparently more expensive at this rest stop) and had a laugh with the funny salesman there, called Nubi. 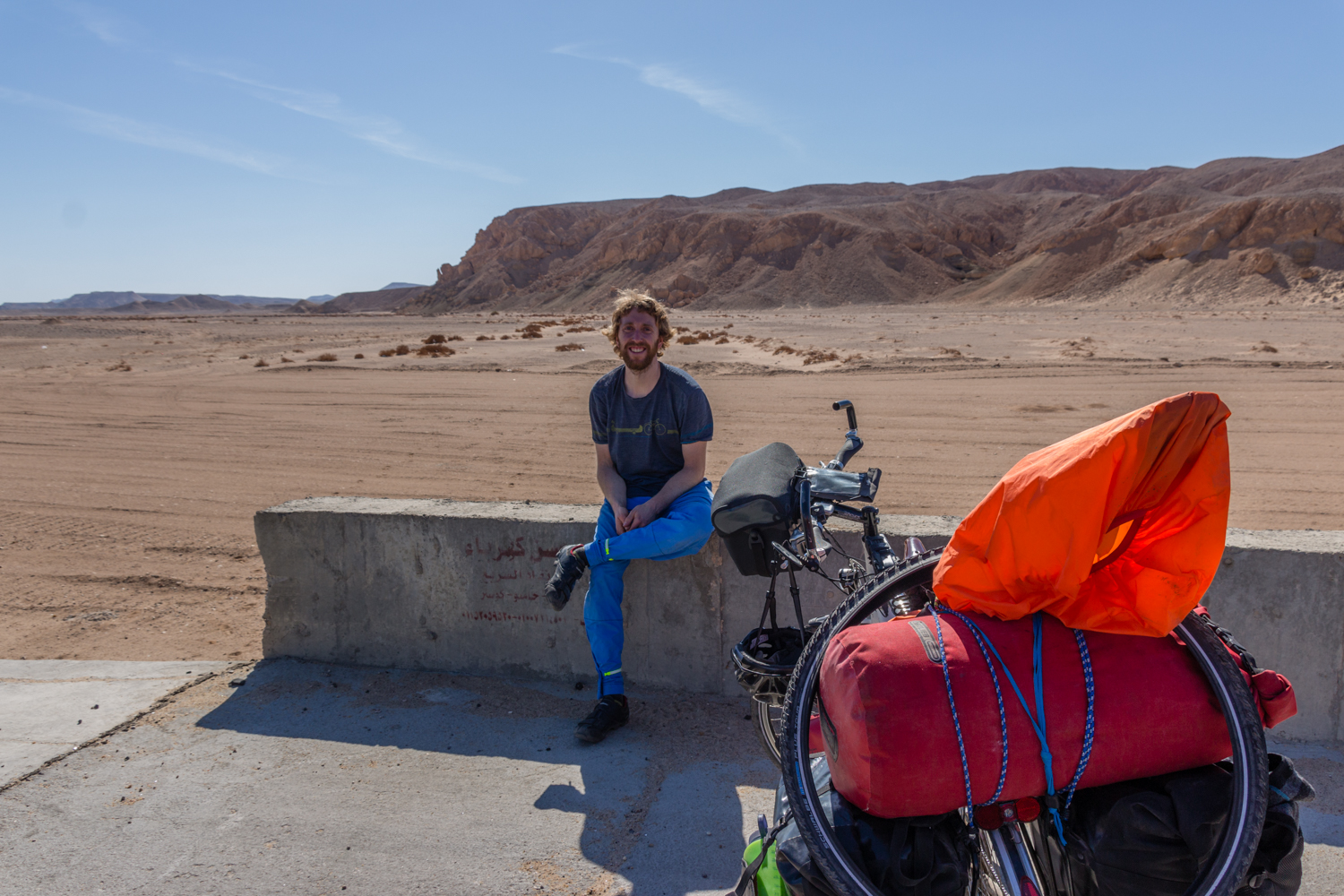 Picknick in the desert

Later, when we came back to our tent, we were sort of hosted by a police officer (with google translate). It was nice at first but then it got a bit odd. He first told us that we must not deal with anyone else in the town but them. Later, he asked Simon if he could help him to get some “strength” and asked if Simon had a “sexy booster” for him….??!!
The next day we left but with convoys following at a distance this time. The views we had on this stretch from the rest stop to Safaga were stunning! There were brown, pink and grey mountains… completely different to the Nile. We saw mountains in the distance and cycled next to tall and flat rock walls…. if the quality of rock was better this would make an amazing climbing destination. 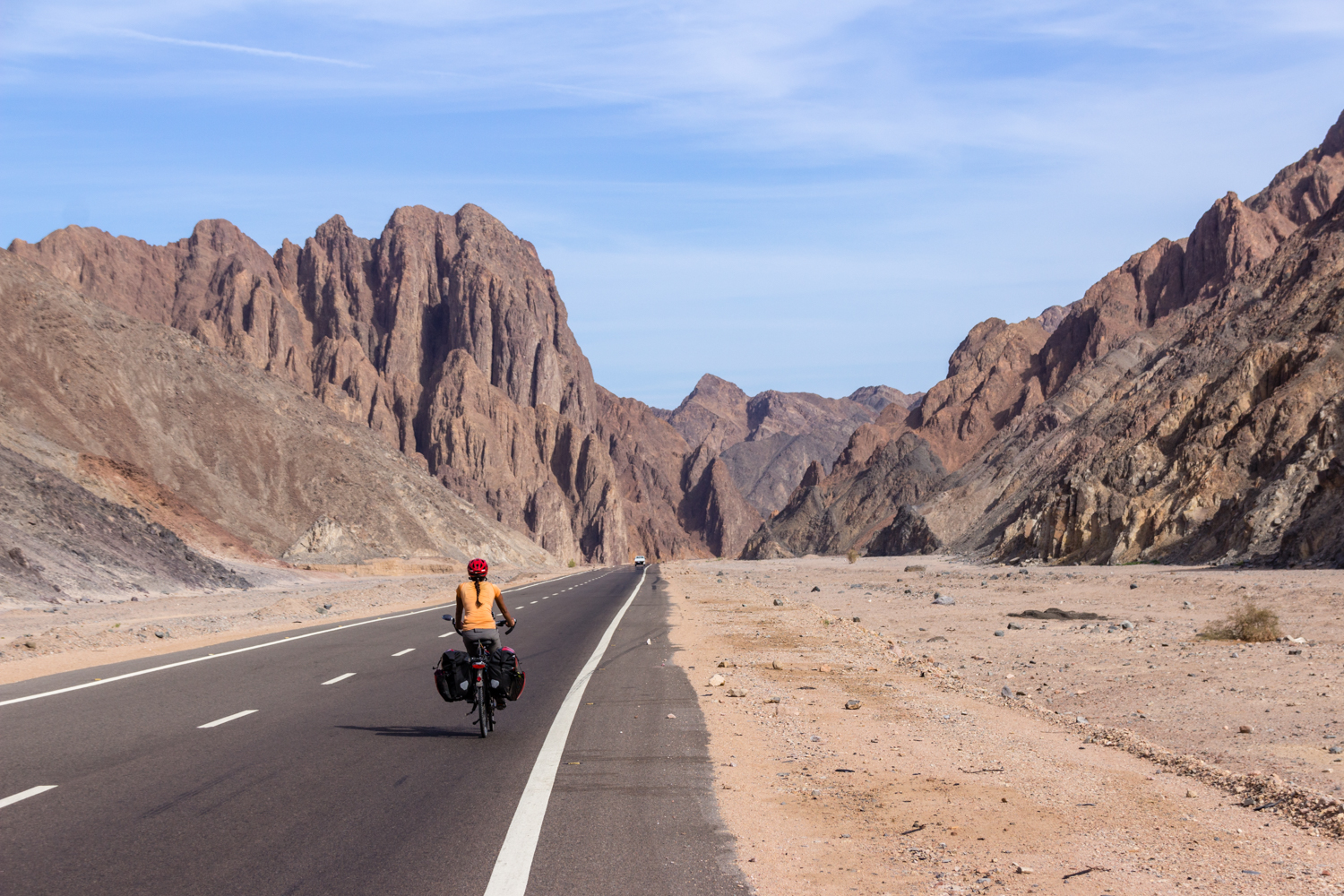 Sharp, jagged mountains in the desert

We still had headwind today. Even when we reached the top of the pass and started to descend, we still had to take turns fighting the headwind. It slowed us down to 18-22km/h, not much faster than when we were going uphill.

Finally, in Safaga, we got to our hotel and somehow emerged from the desert to what is now luxury for us. We got a room at the El Jawhara Inn and spent the afternoon at their private beach, where we relaxed on a massive lounge bed with good coffee. 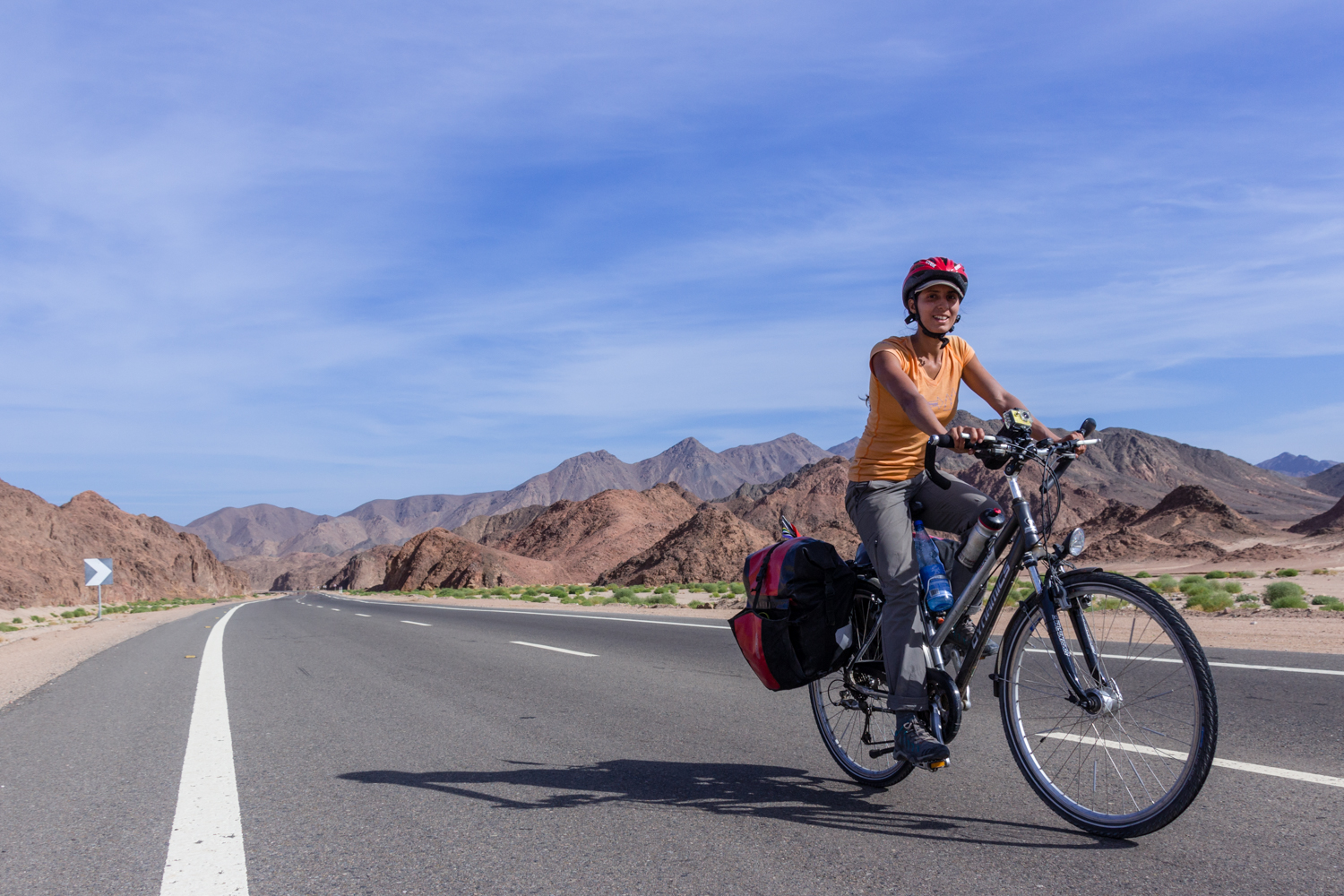 Surprisingly, the prices are pretty cheap here. We had dinner for just 14 L.E. (0.70 EUR), although Simon paid the price by biting into a hot chili and almost cried. You never know if the chilies are hot or not. We washed it down with some coffee at a bar but instead of football it was filled with old men watching a WWF women’s match while they smoked shishas.

Although people are still friendly in Safaga, we haven’t got the same “welcomes” or “hellos” like we did on the Nile. A lot more people also speak English here (and even some German). There are clearly more tourists on the Red Sea.