Before we could cycle into Croatia from Italy, we had to pass Slovenia. Our planed route in Slovenia was only 22km long. We could have done that in a single afternoon and this blog post would be already finished. But we spent almost two weeks here, not for cycling, but for climbing. The climbing crags around the small village called Osp are world famous and we quickly realized why. 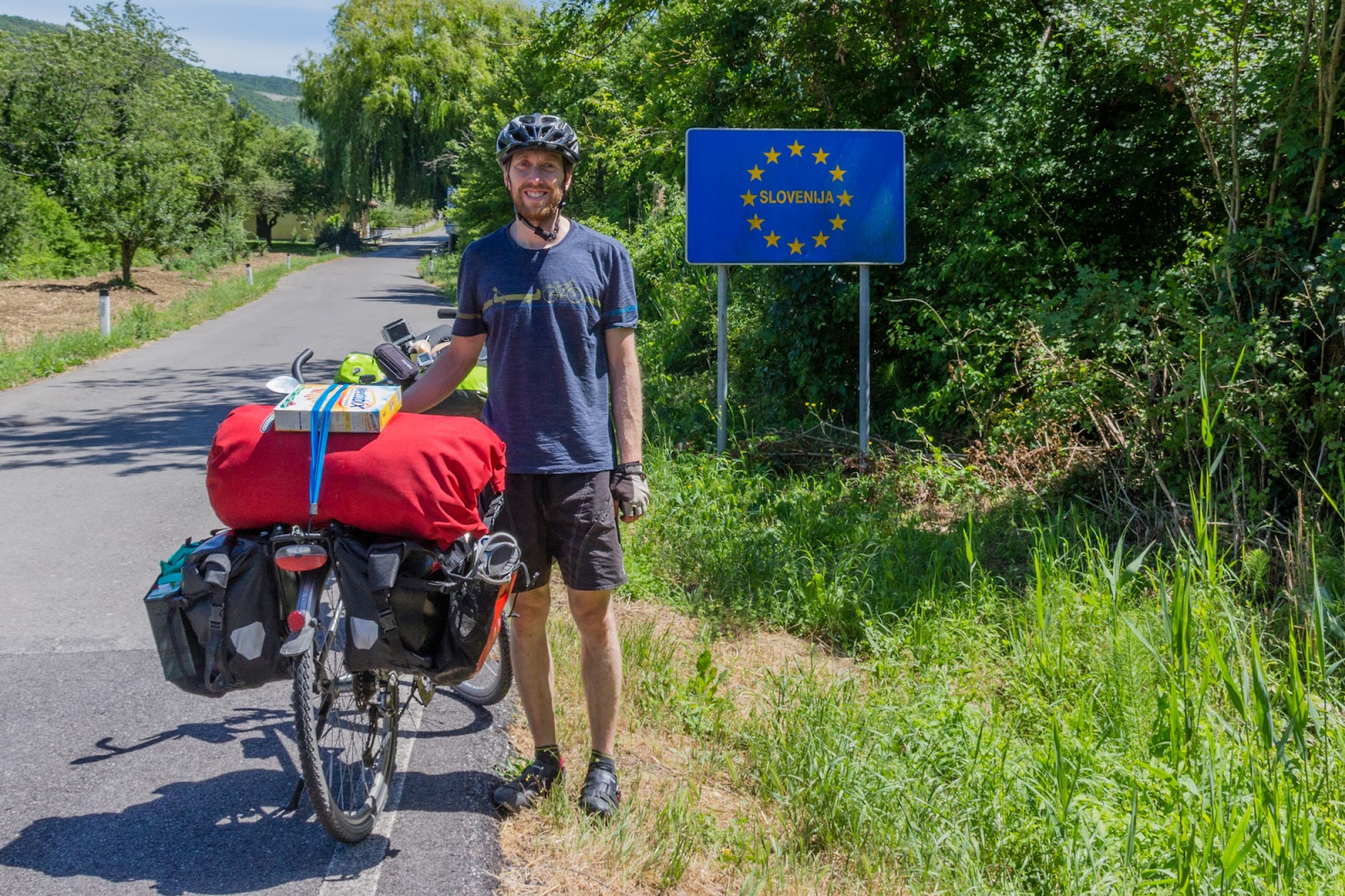 Crossing the border into Slovenia.

Osp is situated just behind the Slovenian border when coming from Trieste, Italy. We crossed this border countless times as we always went shopping or swimming in Italy. Thank you Europe and your open borders, as we never had to stop and usually never even took our passports with us.

The climbing around Osp is very diverse and there are four main climbing crags: ‘Crni Kal’, ‘Misja Pec’, ‘Banje & Babna’ and the massive cave ‘Luknja’ with long multi pitch climbing above it. We visited each climbing crag and each crag has its own appeal. 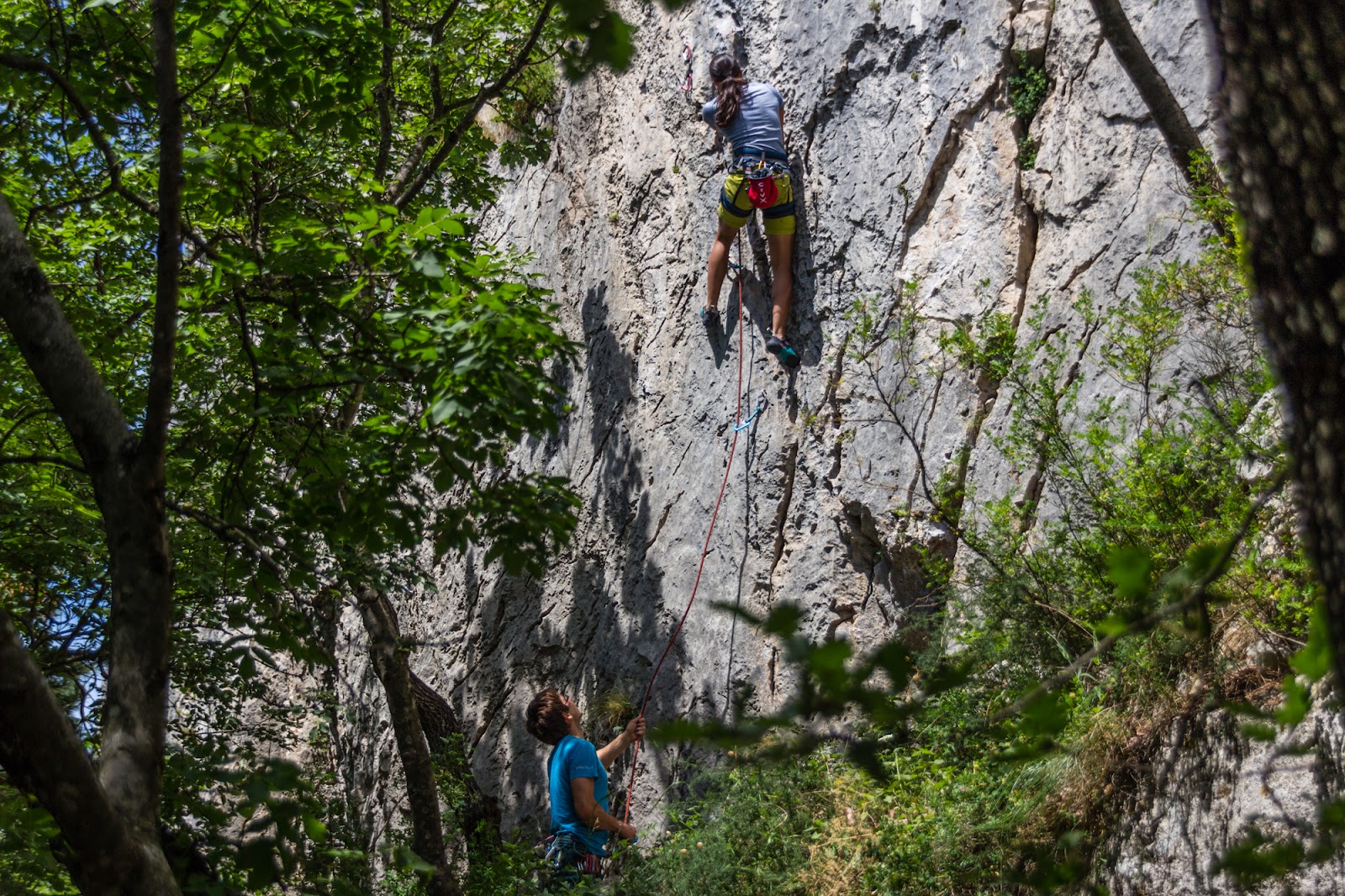 The first few days we spent in Crni Kal, which is about 3km south of Osp. Unfortunately it is a steep ride to get there, so not really accessible by bike. Luckily, we had our personal chauffeur… our friend Matthias from Heidelberg came to Osp for a week to visit and climb with us. He had his car with him, so it was no problem. The climbing there is mostly technical face climbing with a beautiful view over the area down to the Adriatic coast. The wall is south facing, but thanks to lots of trees at the bottom, we could climb there even in the heat. 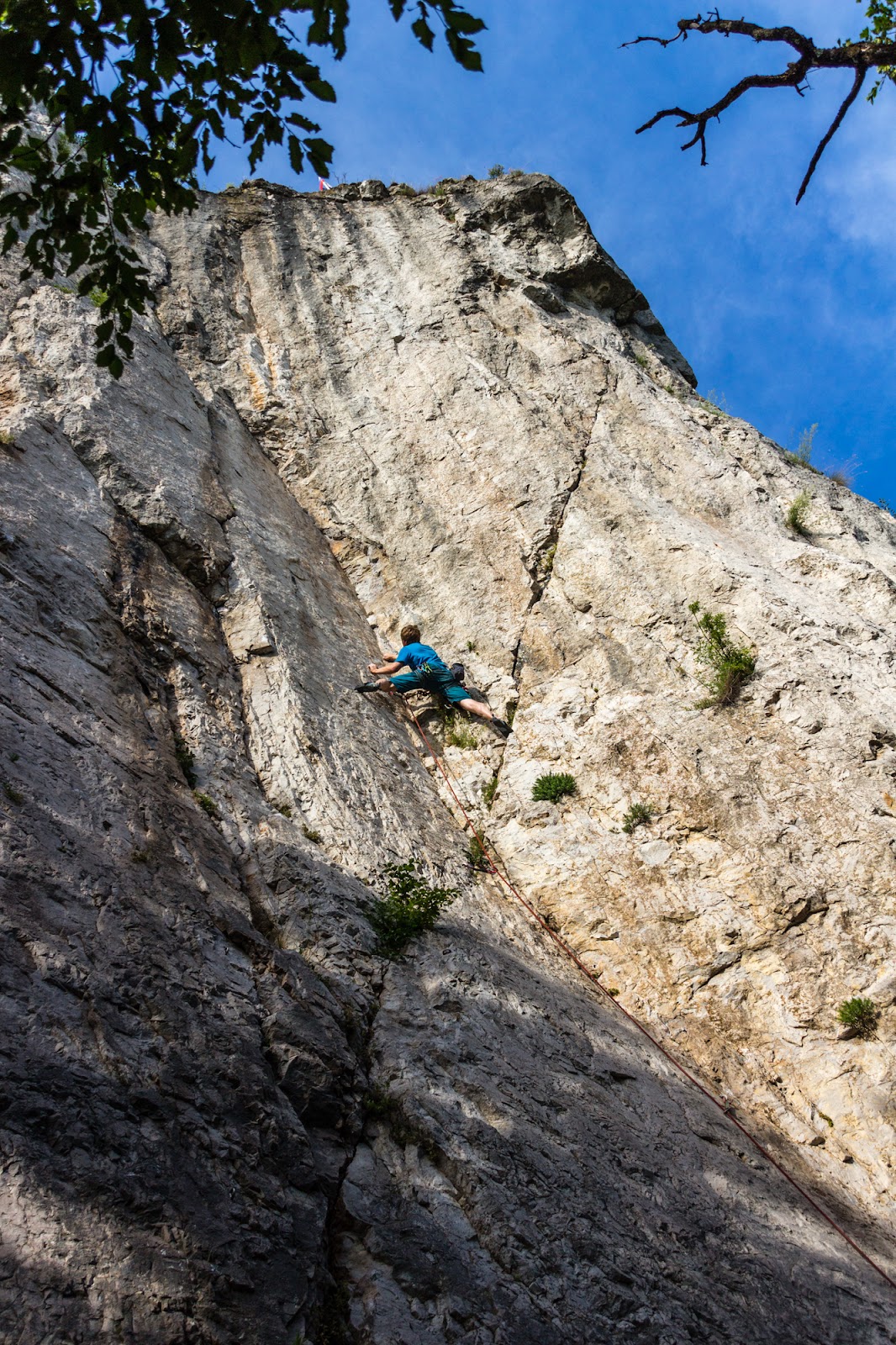 After all the biking, our fingers became weak and we were thankful to start with some easier routes, which are not so steep. We already knew that the climbing in the other sectors would be much steeper and more powerful. Besides the climbing, we also took it easy with plenty of coffee breaks and chatting under the trees during the hottest time of the day. 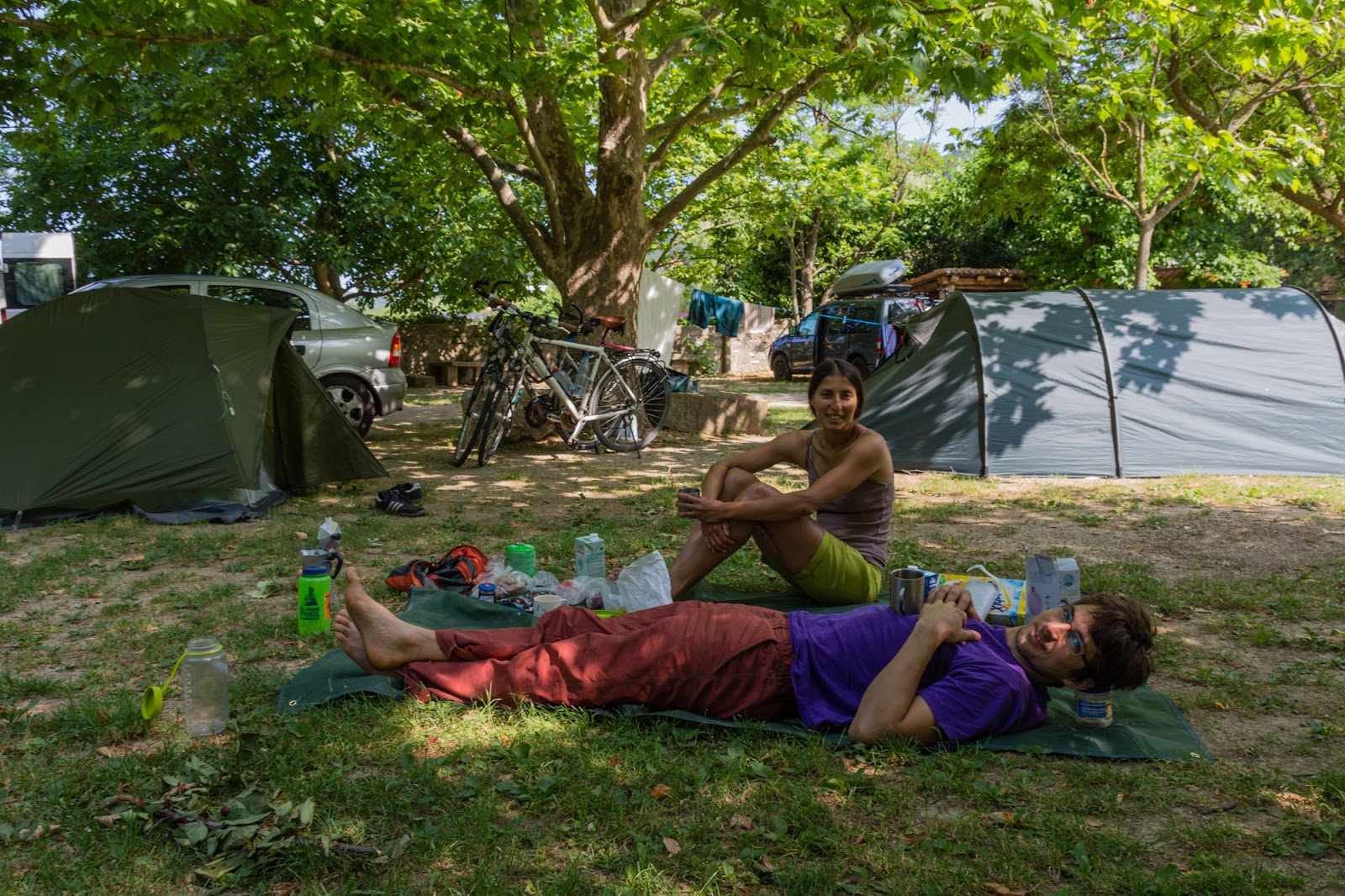 The massive cave ‘Luknja’ is directly in Osp and full of hard, long routes up to 55m. Maybe a bit too hard for us, but there are also plenty of ‘easier’ routes on the side of the cave. In winter it can also happen that the cave is flooded with water and you need a boat to access some of the routes, but for us it was completely dry. This cave is also home to lots of birds and it is impressive to watch them flying in and out effortlessly. Luckily they did not drop anything on us! 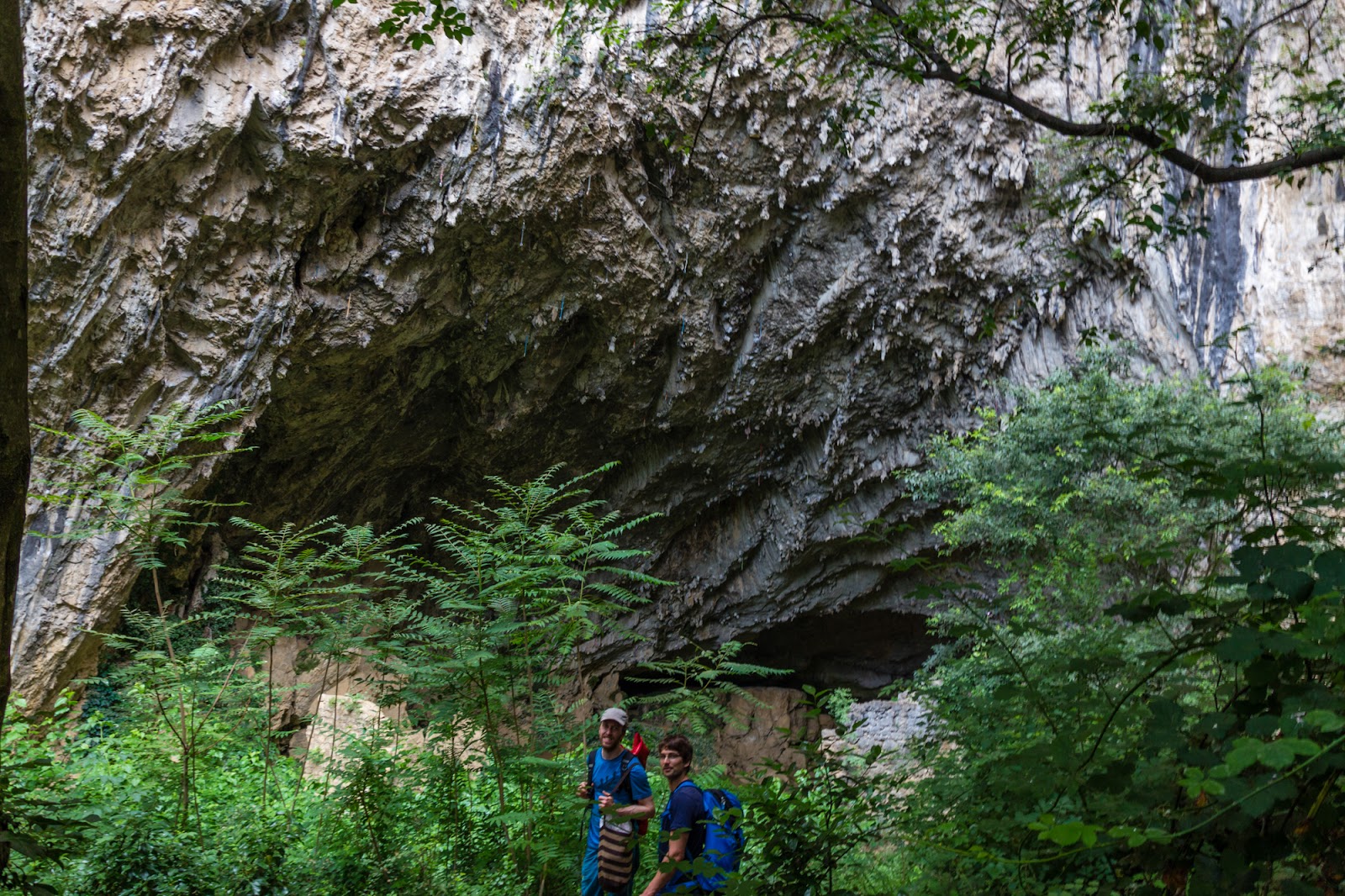 On the left side of the cave are plenty of five star routes in the seventh French grade. We tried ‘Trzaska smer’, which had a tricky start and a powerful and steep finish. The route ‘Vitez iz Poljan’ was also a beautiful long endurance route along some tufas. We needed quite a few coffee breaks to finish these routes, but it was a great way to train our fingers again. 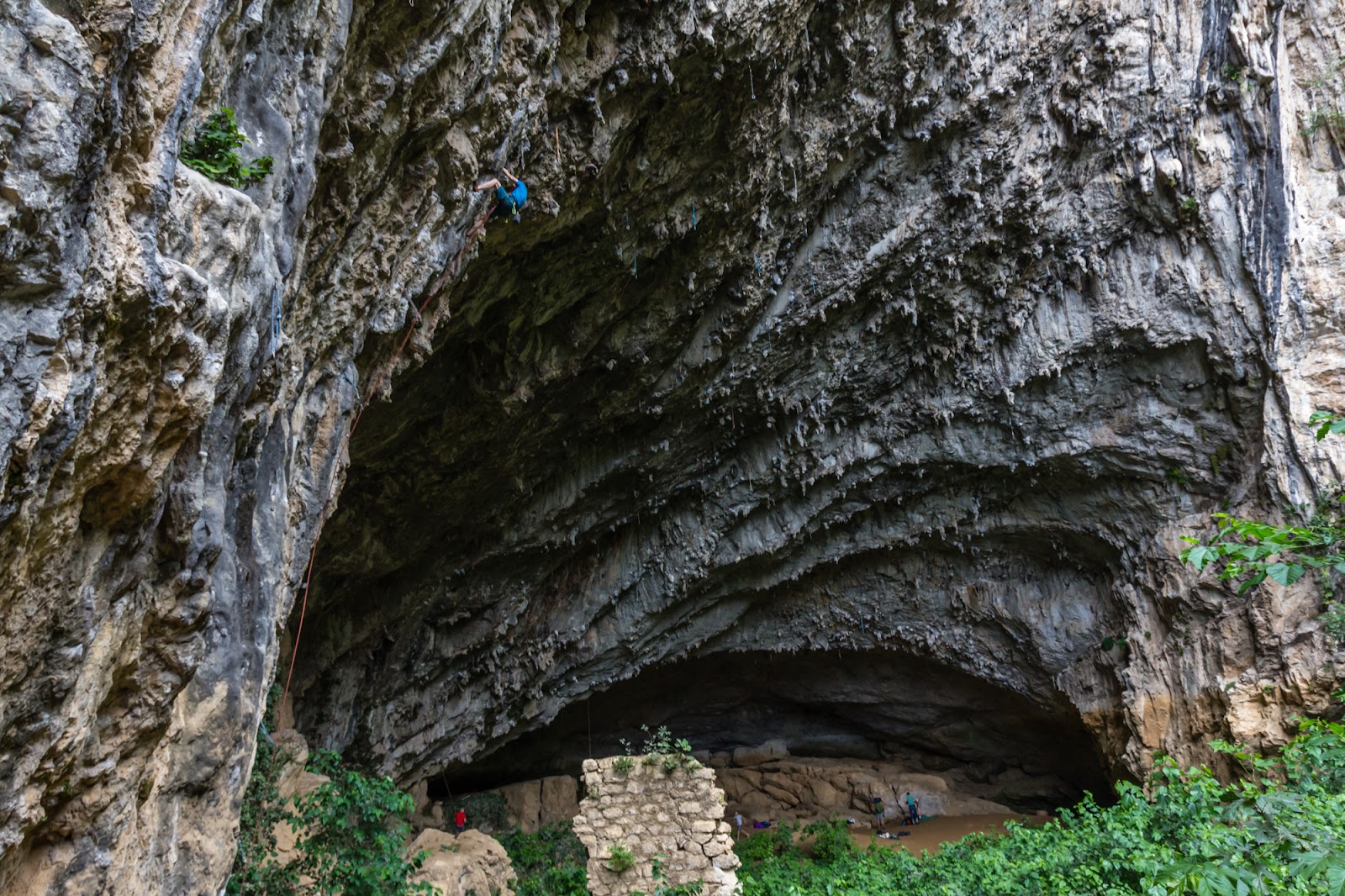 We did not climb too much on the sector ‘Banje & Babna’, as it was most of the time in the sun and this was simply too hot. But the few routes we tried were excellent, in the low as well as in the higher grades. Just a few hundred meters out of Osp is the sector ‘Misja Pec’, which is full of routes, mostly in the seventh and eight French grade, but there also a few easier once. The benefit of this sector is that it is a half circle facing south. So we could climb on the right side in the morning and on the left side in the evening. 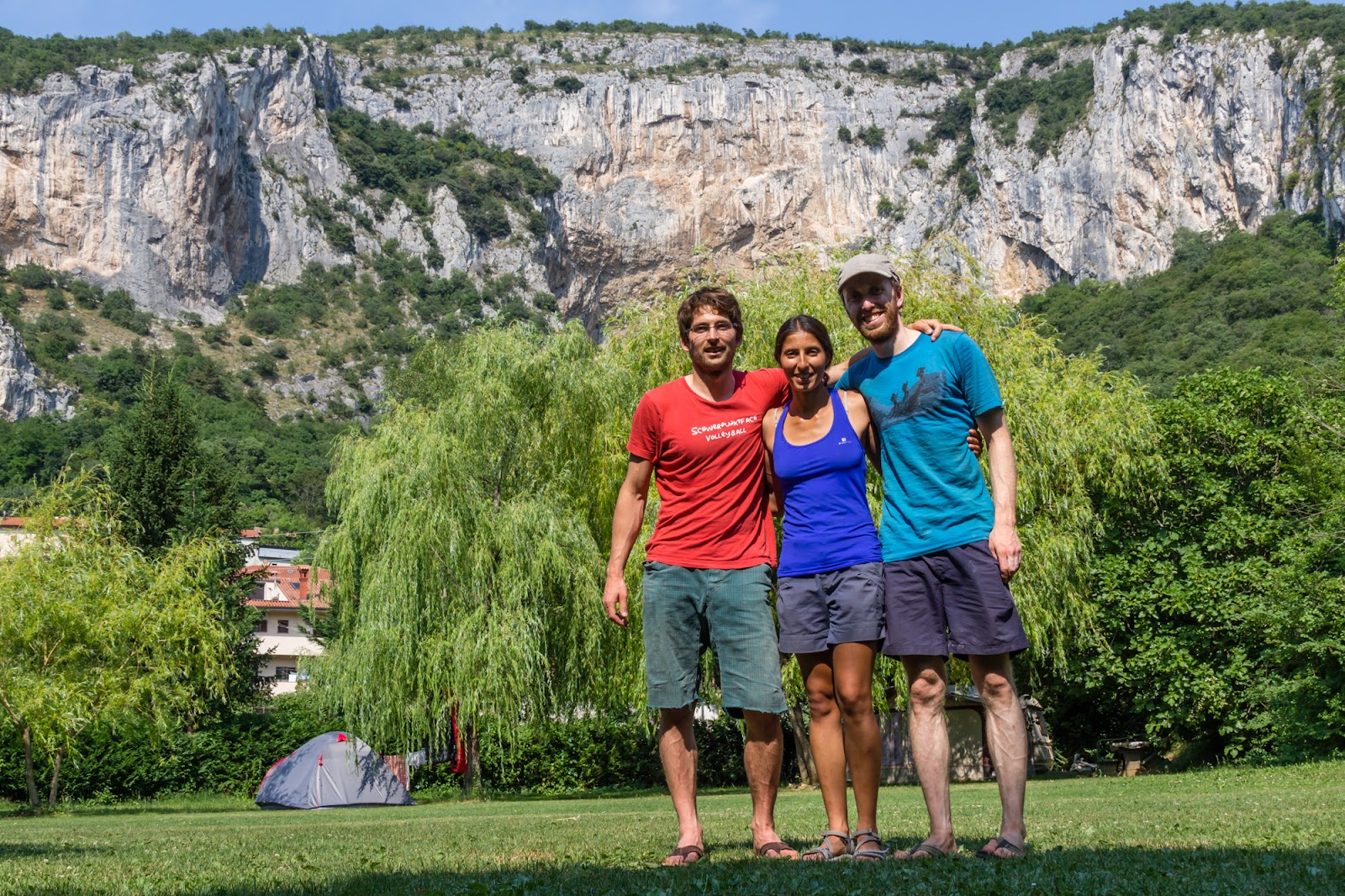 Thanks Matthias for visiting us!

Besides all the climbing we spent a day on the beach and visited Trieste once again. After all the climbing we needed lots of calories, so we enjoyed Italian ice cream and we also had to have a real Italian Pizza. It was delicious! Our fingers and skin were also very happy not to grab sharp holds for at least one day. Rest day in Triest with Pizza.

Our favorite sector was ‘Misja Pec’ and we spent several days there. On one day the local dog from the campsite decided to follow us. We were just on our bikes leaving the little village as we saw her in our side mirrors running behind us. At first we were concerned about her being on the road and if she might get lost, but she knew exactly the way to the crag… so she lead us to the best spot. She took a nap while we were climbing and left at some point on her own back to the campsite. Maybe it was too boring to watch us climbing.

In ‘Misja Pec’ we enjoyed several classic routes there, such as ‘Hrenovka’, a wonderful long route along tufas, or the powerful ‘Kindergarten’, which did not feel like a kindergarten. 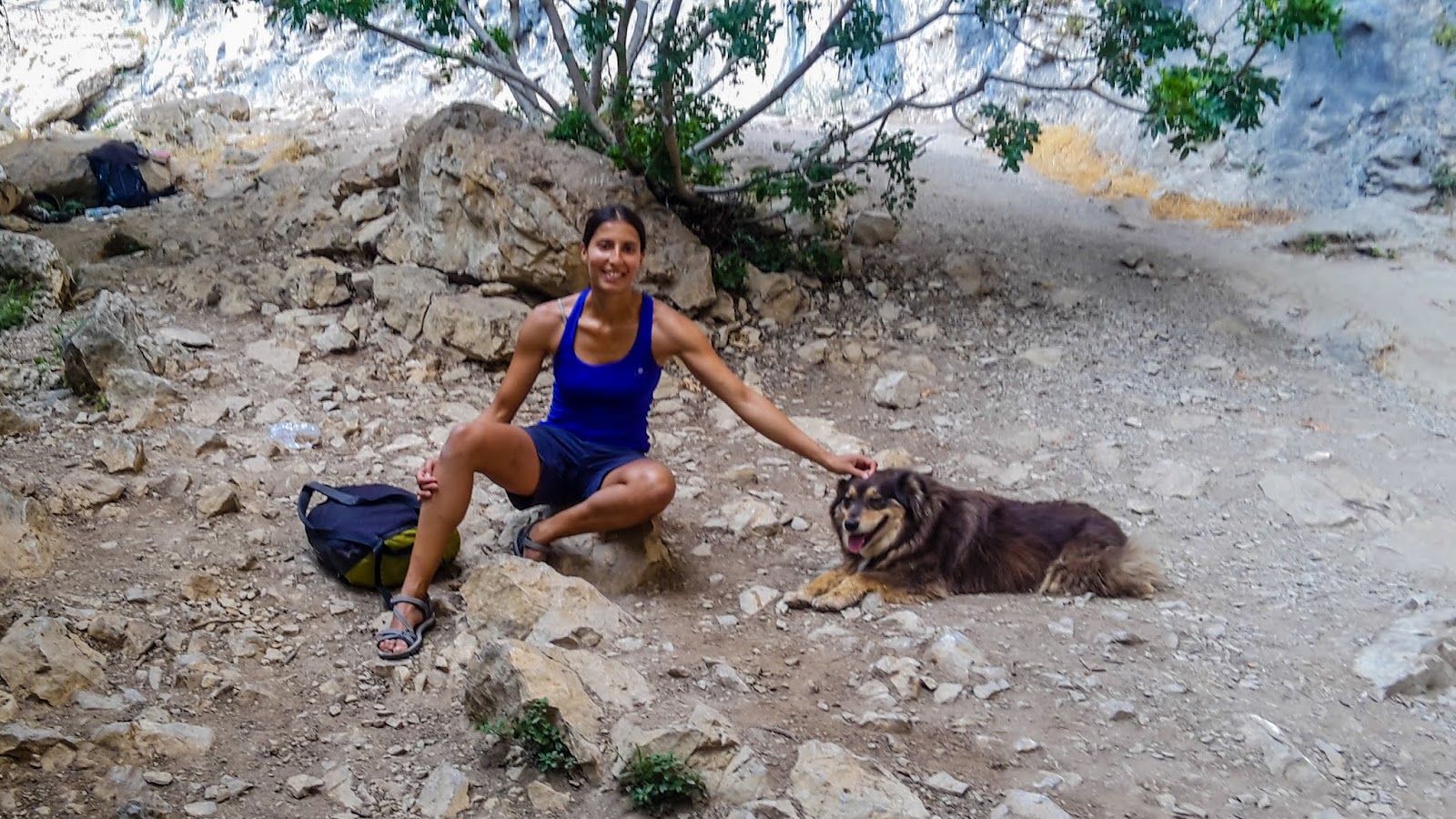 The local dog followed us to the climbing crag.

We also did one long multi pitch, actually Simon did it twice. Once with Matthias and once with Tanya. The view was stunning from the top, seeing the little town of Osp right below us and the Adriatic sea with a sunset in the distance. Combining this with a sun downer of either beer or wine makes the rappelling afterwards even more interesting and Simon got lost while rappelling, not once, but twice! 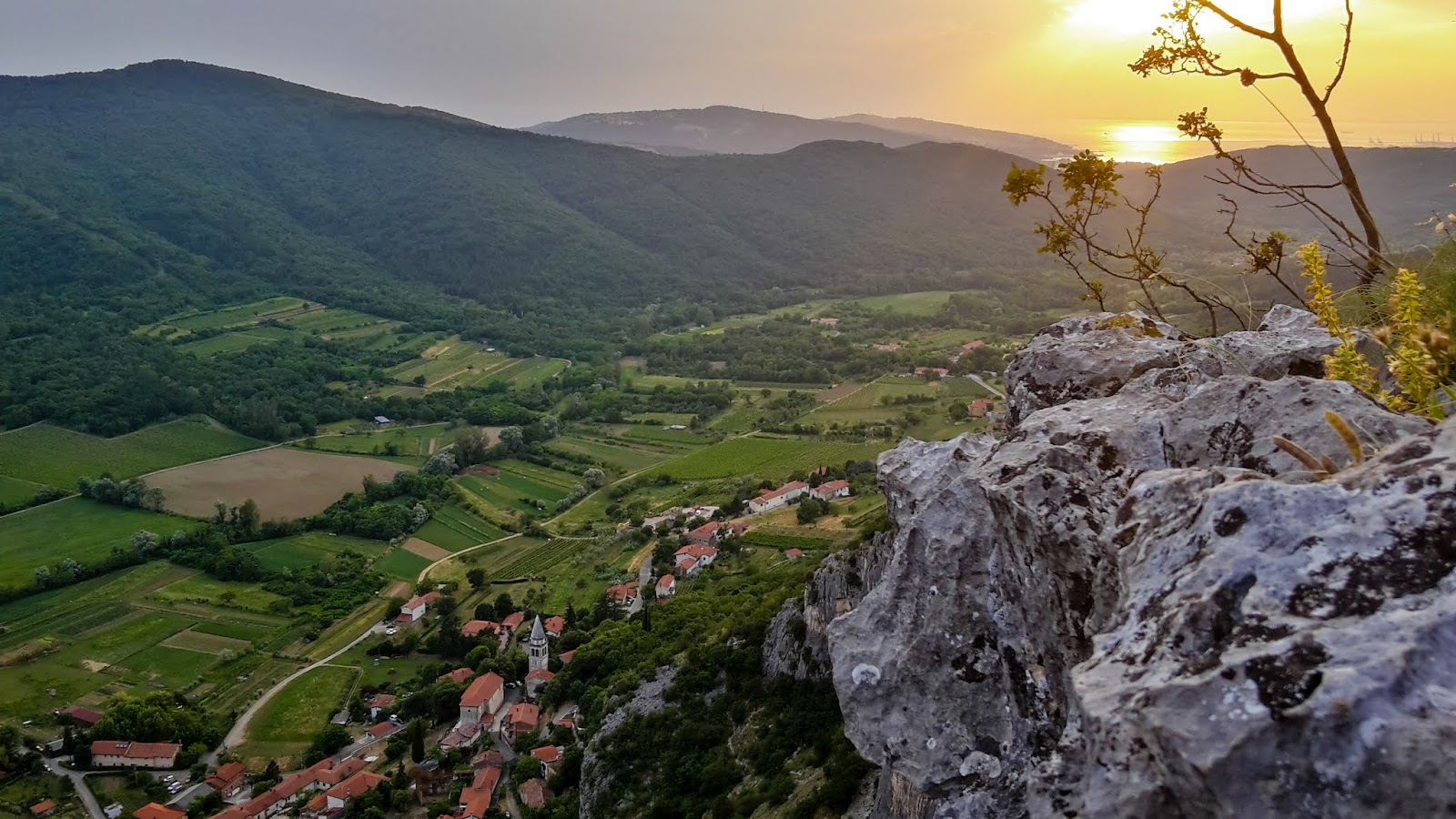 Sunset from the top of the wall.

Summing up, we had an amazing time climbing in Osp. This region is a world class climbing destination and perfect for a bike trip as the campsite is so close and shopping possibilities are also around the corner. Osp is usually not considered as a summer destination and it was clearly very hot while we were there. But it is possible to always find a shady wall and we had the benefit of having the walls most of the time on our own, which we really appreciated.

After 10 days of climbing we packed up and started biking again. Having not biked for a while and having strong fingers did not help with that but we made our way towards the Croatian border. However, Simon’s bike started to make some strange noises just before the border… but this is another story from Croatia.

More pictures can be found here.