We left Beni Suef at 7 am. The next hotel was over 130 km away in El Minya with no formal accommodation in between. Our plan was to see how the day goes and if we can do the stretch in one day, we will push for it, otherwise we would try to ask people or a mosque in between. If that didn’t work out we would ask a truck to take us to El Minya (or a train if nothing else worked).

We took the small road for 25 km out of Beni Suef, hoping to avoid police escorts. We went through one very small check point, which they let us through. The next stretch on this road was actually the most beautiful and interesting stretch of the Nile we have seen! On both sides there were bright green crop fields and the Nile was now strangely peaceful with the sun slowly rising behind the haze of clouds. We went through tiny villages where donkeys were the main form of traffic. Villagers looked at us completely perplexed, it is quite possible some of the kids here have never seen a tourist before.

As we needed to do a big distance today, we eventually left the smaller, interesting road and hit the highway. We stopped for another coffee and once again, they did not want to charge us and outright refused to take our money. The hospitality of the people along the Nile has been dumbfounding. People constantly offer us food or tea wherever we are. They always shout “welcome” or “hello” and are genuinely very excited and happy to see us. We are also very glad that we have managed to come this distance without a police escort, which meant that we could take our time and interact with the local people. 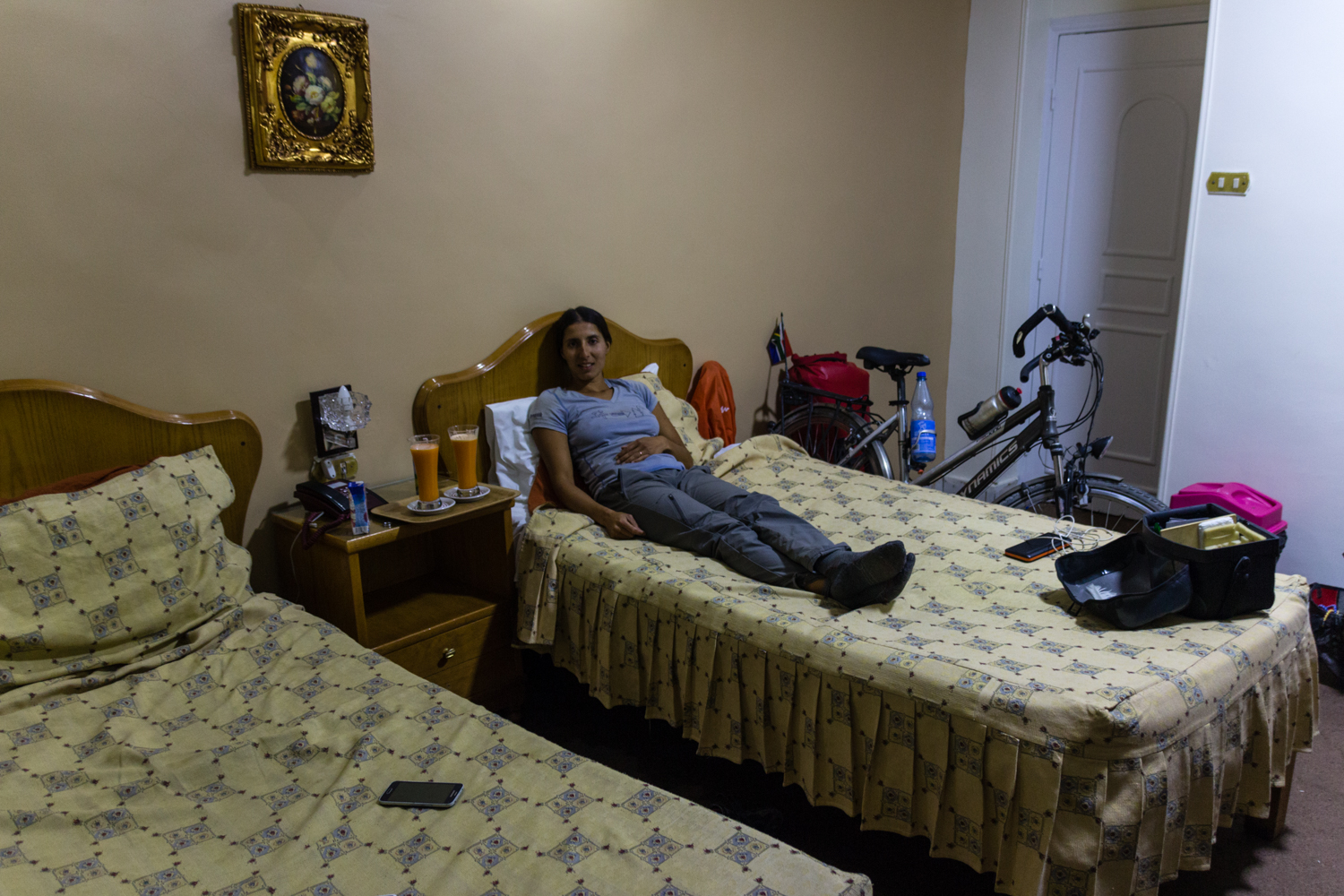 Our hotel in Beni Suef

Not long afterwards, though, we hit our first large police checkpoint of the day. We quickly learned that the only person that we should speak to here is the captain. The higher the rank the better (Eagles are higher than stars and stars are higher than stripes). He asked for our passports and we gave him photocopies (as always). He didn’t speak any English, so luckily Simon’s sister and her boyfriend prepared a letter for us in Arabic stating that we do not want a police escort and would like to cycle on our own. The captain just smiled at Simon after reading it and ordered an escort anyway.

Two men on a motorbike escorted us to the next police checkpoint before Maghagheh, where we went through the same conversation with them. They took our letter more seriously and understood our request. They tried to discuss it with their superiors over the phone and eventually told us that we could go and that we would not get a police escort. We were extremely happy about this, so naturally we were perplexed when 10 minutes later down the road, another driver on a motorbike followed us anyway!

To our surprise, once we reached Maghagheh, our police escort left us. Within the region we had police escorts on and off and we could notice a big difference in how the locals reacted to us. When the police were behind us, they were much less excited, hooted less, did not shout “welcome” and “hello” as much and instead looked skeptically at us and the police. We also realised that it was quieter… all the extra hooting before must have just been for us!

Once the policeman had left us, we got offers for tea again and stopped at a small garden centre on the road. The young men welcomed us and brought out a bench for us to sit on and prepared strong tea in a traditional copper tea pot and served it to us on a platter. 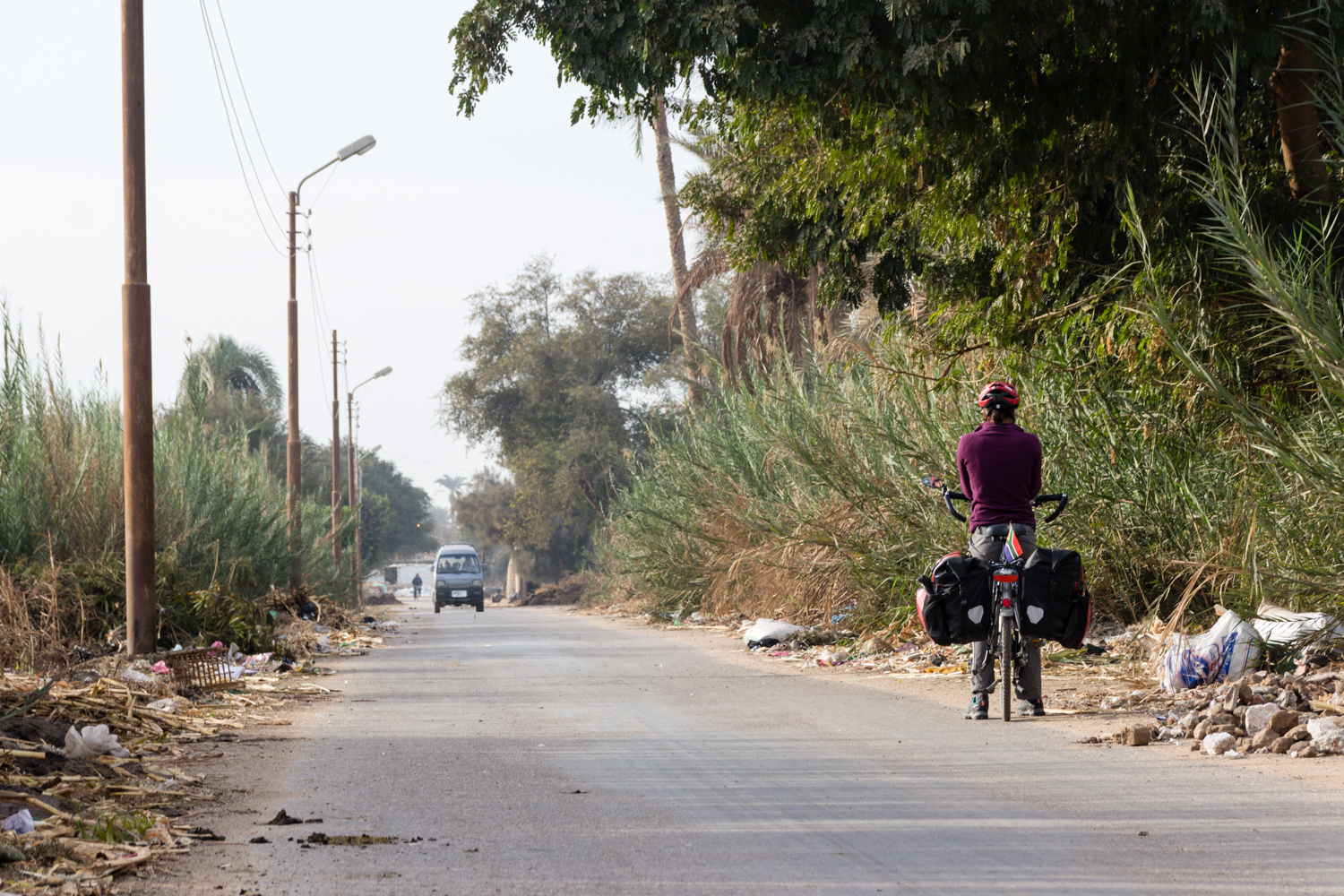 We thanked them and they thanked us for turning around and accepting their invite. We pedalled on, only to find two convoys and police waiting on the side of the road, most likely for us. There was a tourist liason with them to translate. He spoke perfect English and introduced himself as Achmed. We told him we did not want a police escort and that we had already wasted a lot of time at checkpoints. We needed to continue cycling to Al Minya so we could not afford to waste more time here. He agreed to our request and gave us his mobile number in case we had any trouble along the road, including with the police. We cycled on and surprise surprise, a car convoy with four officers followed after 10 minutes. Yayyy.

There were four officers in the car and after navigating through traffic in the next town, they got so annoyed following behind us that they pulled us over and tried to force us to put our bikes in the car! They said: “Us, policeman…. You, small” while one of them flashed his big gun.

We stayed on our bicycles so that they couldn’t pull it away from us, stayed calm and called Achmed. We gave the phone to the police driver and smiled knowingly as Achmed told them to do their job properly and follow behind us. From then on they were much nicer. 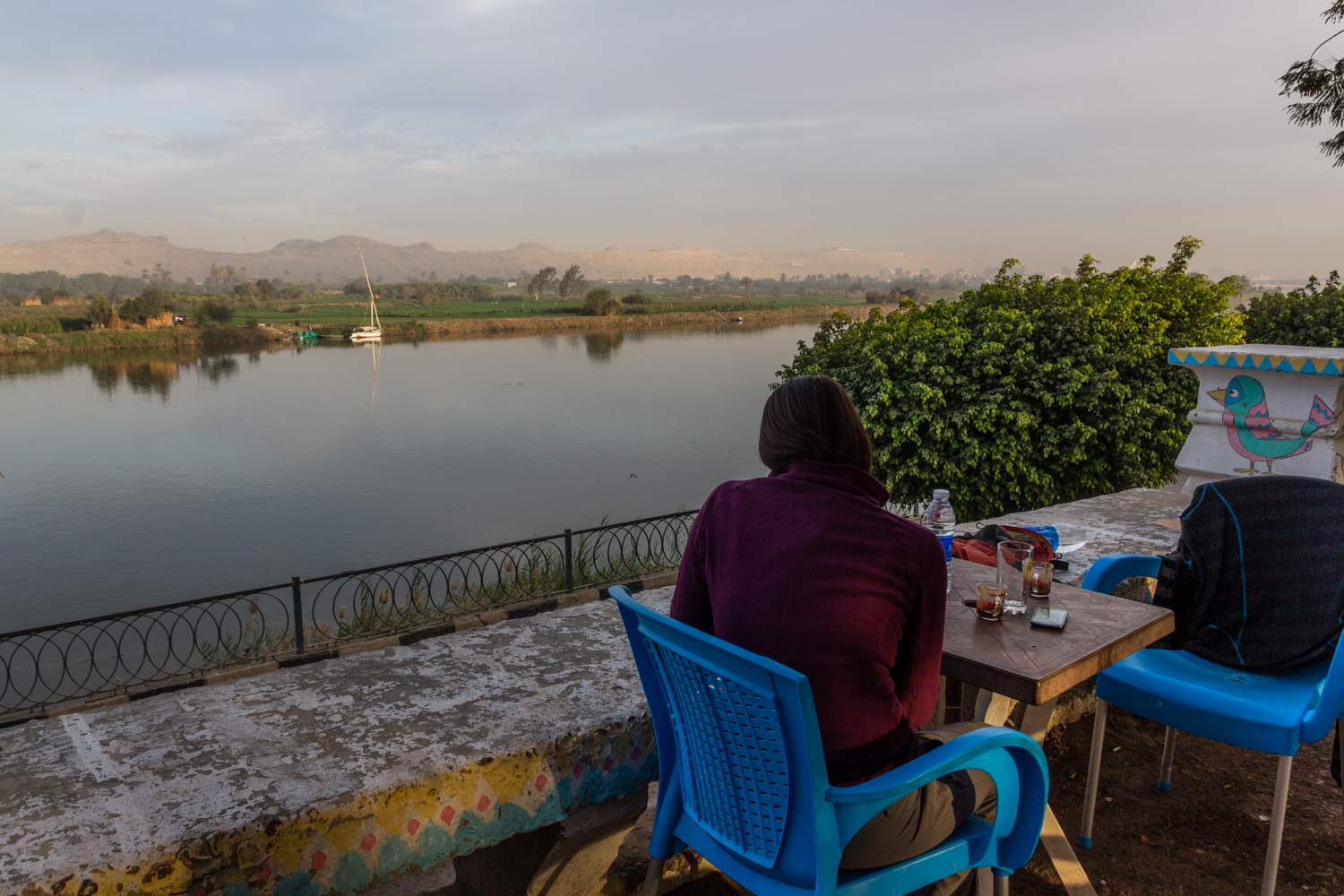 Enjoying a relaxing coffee at the Nile in El Minya

As so much of time was wasted at police checkpoints, we were now really pushing hard to arrive in El Minya before sunset (4:45 pm). We kept up a pace of 25 – 28 km/h while we took turns to fight the headwind. We stopped once for coffee and eventually made it to the city around 4:30pm, breaking our previous record and cycling 132 km in one day.

The police changed at the start of El Minya and they escorted us directly to the hotel. One of the police officers went with Simon to the hotel and even looked around the room! Reallyyyy??!!! We got tons of questions from the hotel staff about what our plans were for the evening: “are you going out into the town? Where is your next destination? What time are you leaving the next day?” etc.

We moved hotels as we decided to give our legs a rest and stay two nights… the other hotel that was available for both nights had a scanner and policemen at the entrance! We got all the same questions from them again and they even wanted to escort us around the town. We firmly said “hell, no!” and then they agreed after we wrote a statement and signed it.

There is no way we will get out of this town without the police knowing, they are everywhere here and we are afraid we might have an escort for the rest of the Nile. Hhhmmmmmm.