Luxor and The Valley of the Kings (Egypt #12)

We left the hotel at 5:30 am and rode the 30 km towards Hughada, with the full moon shining brightly over the mountains. The sky turned from a pitch black night to another blue-skied day when we arrived at the bus station. We were immediately greeted by the driver and were offered tea and coffee. He asked us if we have kids and then when we asked him, he said “No! Wife – finished” while laughing. 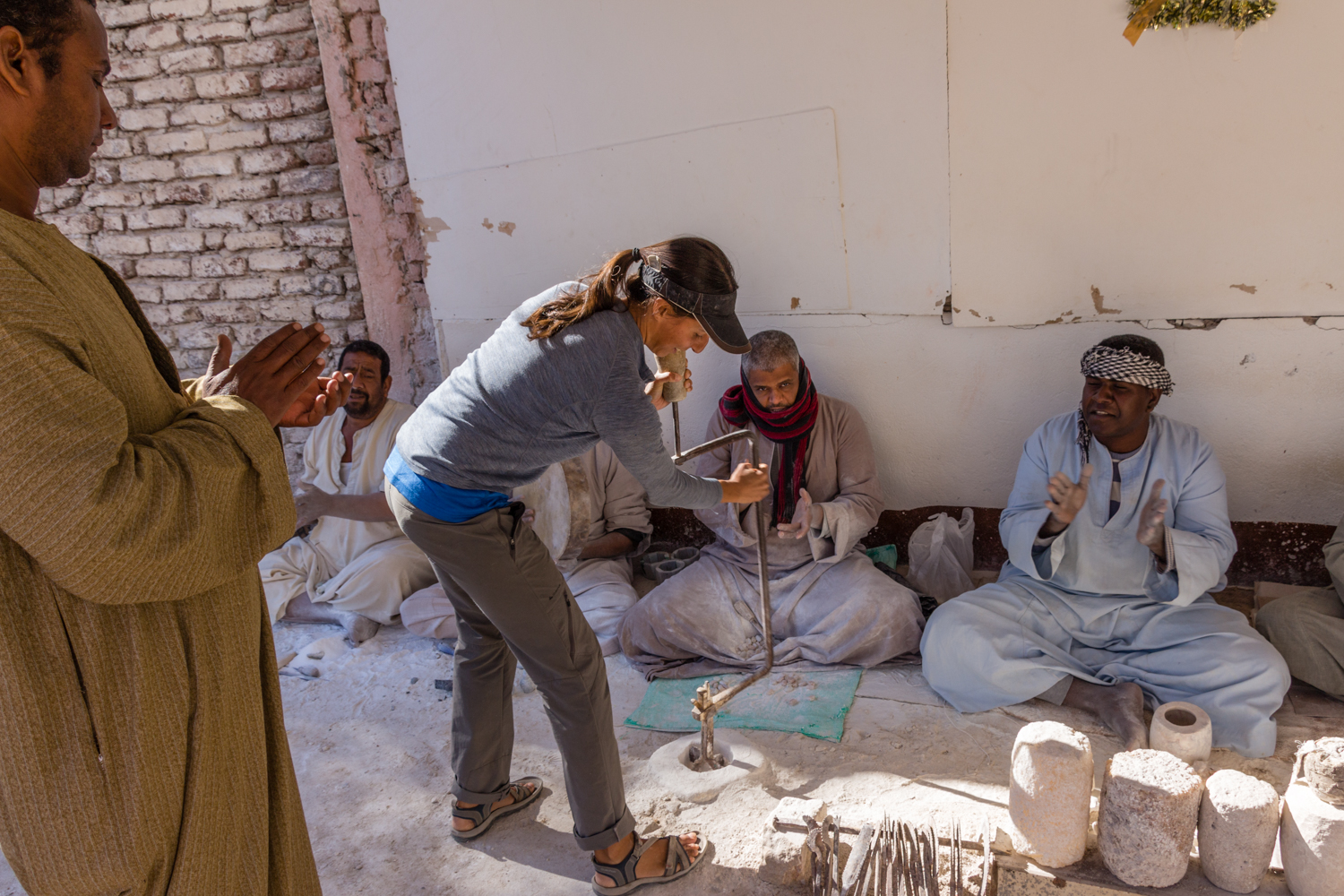 The luggage guy wanted us to pay him 20 L.E. baksheesh for the bikes. Afterwards he came back with other official guys wanting 100 L.E. (first 200 L.E.). Simon went out and eventually the guy was made to give back his baksheesh… he just got too greedy!

After 4 hours we arrived in Luxor where salesmen hounded us while packing the bikes. Taxi, taxi taxi.. Horse carriages, horse, horse… only 10 pounds. “We have BICYCLES” we wanted to scream! Hostels and hotels were another selling point. 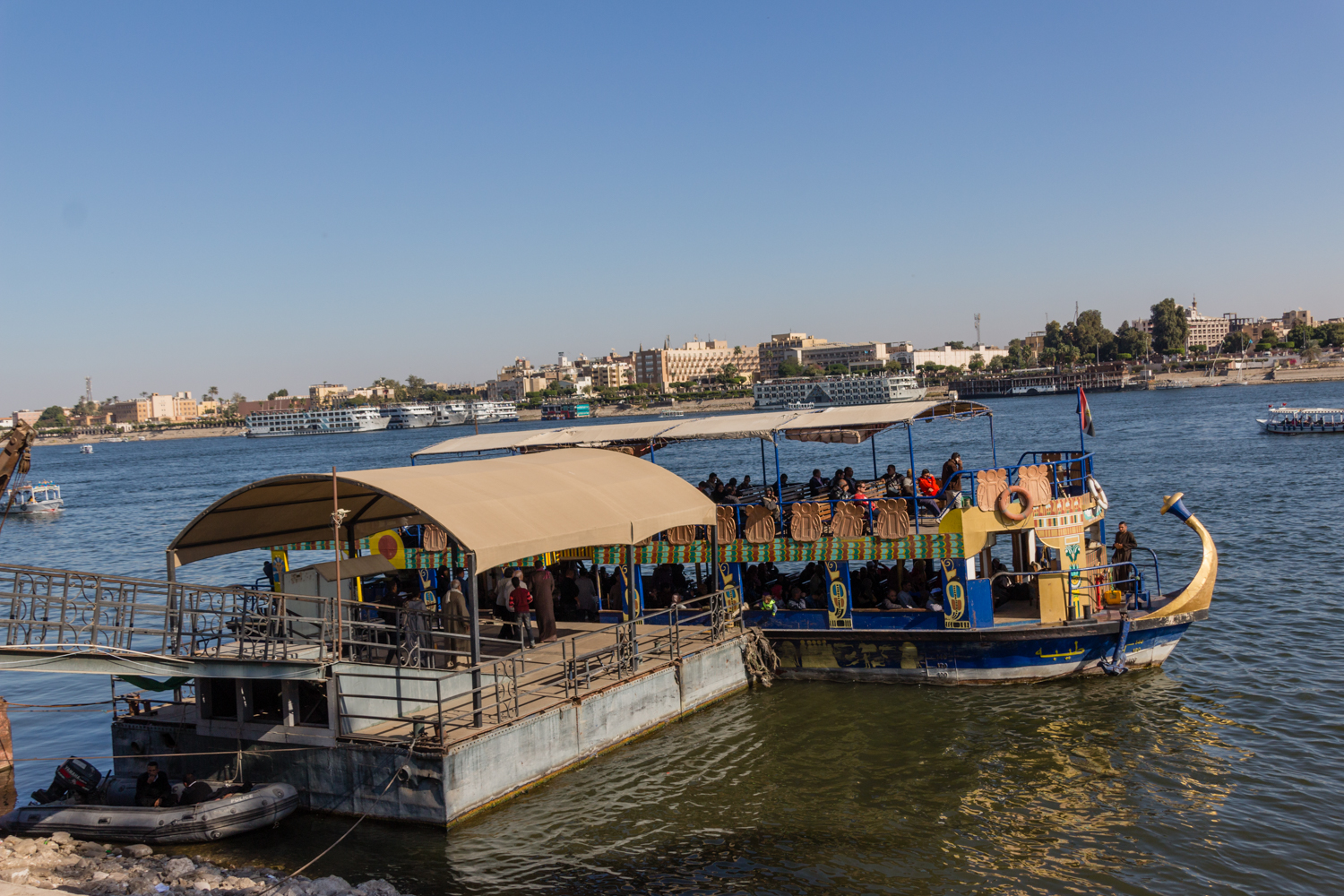 The ferry we took to the West Bank

We cycled into Luxor and along the beautiful bank of the Nile, where we crossed the river with the ferry (1 L.E. pp). Taking the fully loaded bicycles onto the ferry was tricky. It was absolutely packed and must have been rush hour. The west bank is much quieter and we found our accommodation 1 km down the road, El Salam Camp, next to the Nile. It had good reviews on booking.com and was dirt cheap (100 L.E. / 5 EUR per night) for a basic and comfortable bungalow. Little did we know we would pay the price two days later. I’ll explain in a bit but first – Luxor. 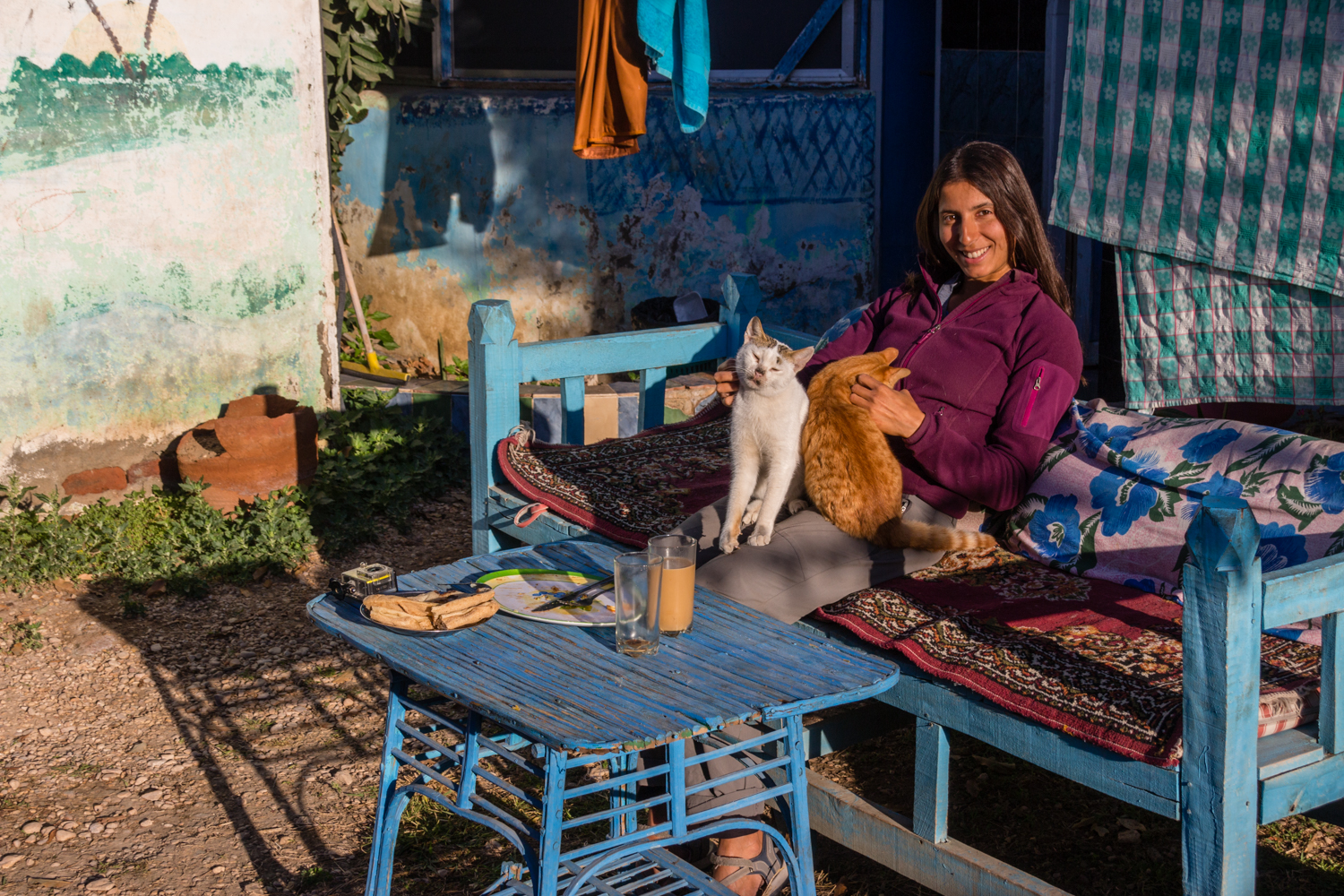 Resident cats at our bungalows

Luxor has gorgeous sunsets over the Nile and we headed back to the East Bank to get our long awaited Turkish coffee fix. After the bright orange sun quickly disappeared, the sky was illuminated in layers of red, orange, pink and a deep blue for the next hour. We enjoyed nature’s gift while sipping coffee at the waterfront and watching some very brave boys climb 10 meters up felucca masts to take down the sails. 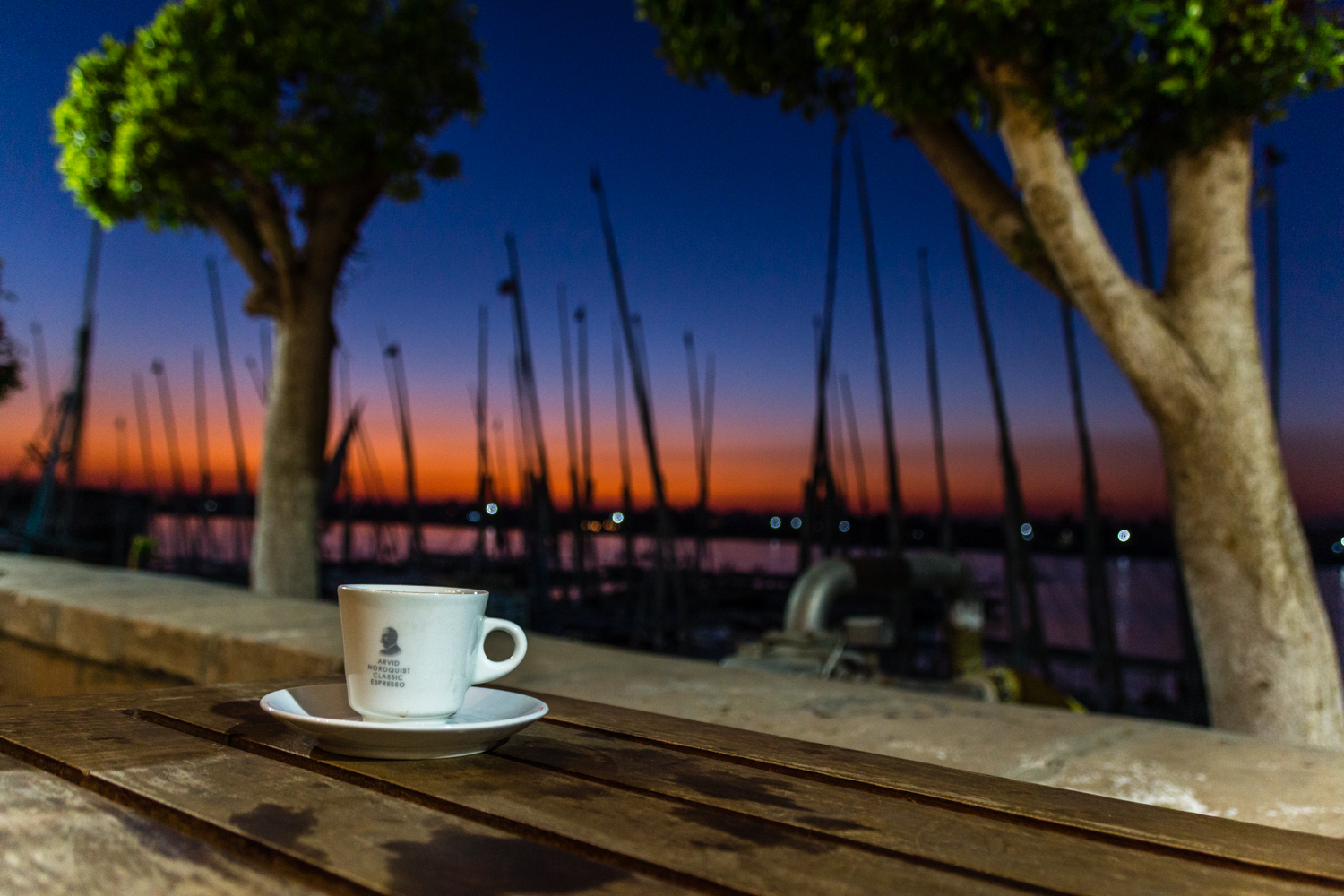 Coffee at the Nile while watching the felucca boys

We then strolled through the souk (market) and took in the colours and sounds. We came across a tailor who makes clothes at his workshop and he fitted Tanya for a pair of comfy pants and made Simon a very cool shirt. Besides the first salesmen, it was a good introduction to this city. 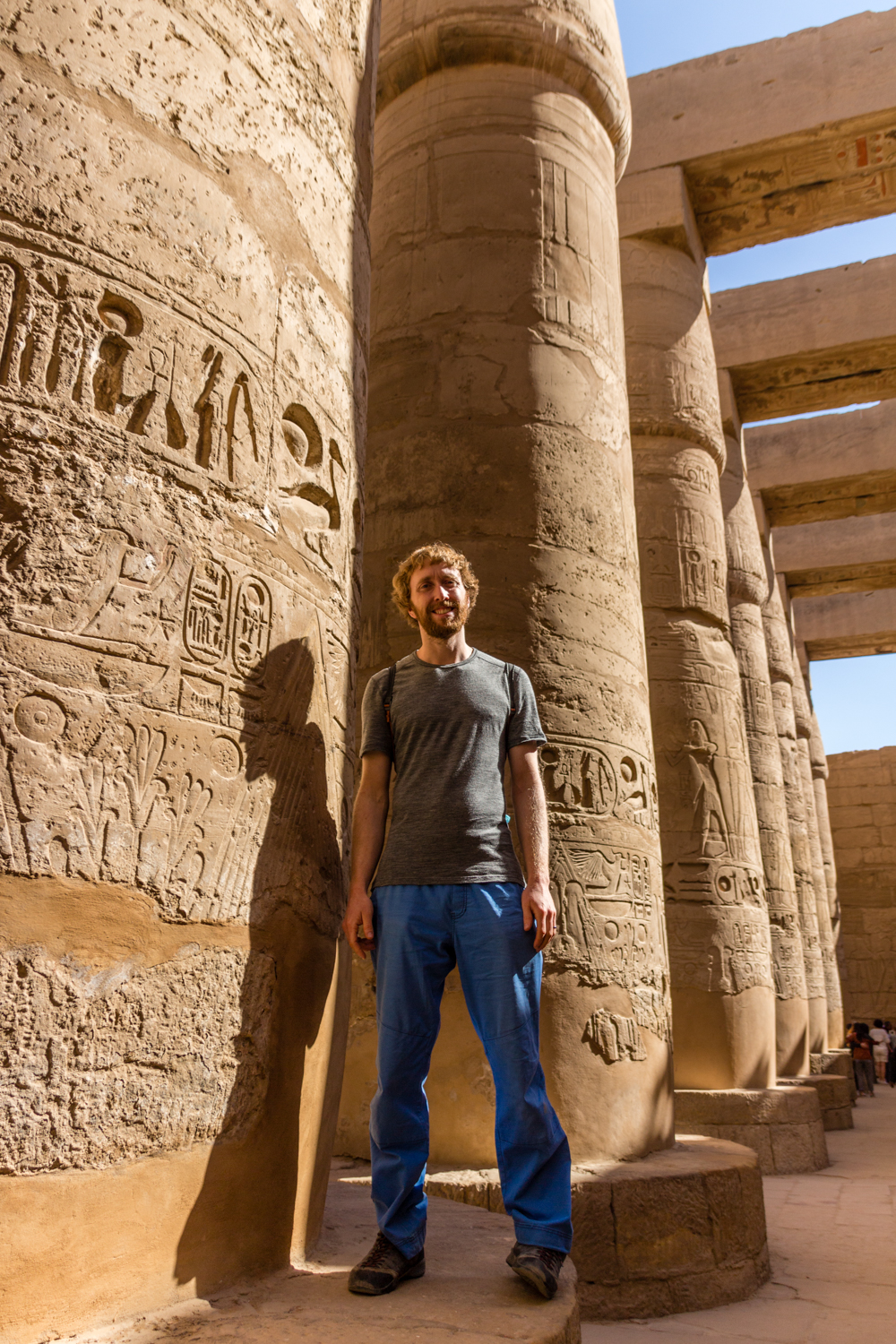 Luxor is just a treasure trove of discoveries and there are still many more to be made here. The Valley of Kings, Queen Hatshepsut’s and Karnak Temples were all on our itinerary. We headed to Karnak Temple where we met an excellent guide from Turkey, Elinour (+201003638326), an Egyptologist who has worked on digs around Egypt and specialises in hieroglyphics. She offered us a price we couldn’t refuse (even on our budget!) and gave us a great insight into the Ancient Egyptian religion, hieroglyphic languages and festivities. We had such a good experience that she joined us again the next day to guide us at Queen Hatshepsut’s Temple and the Valley of the Kings. 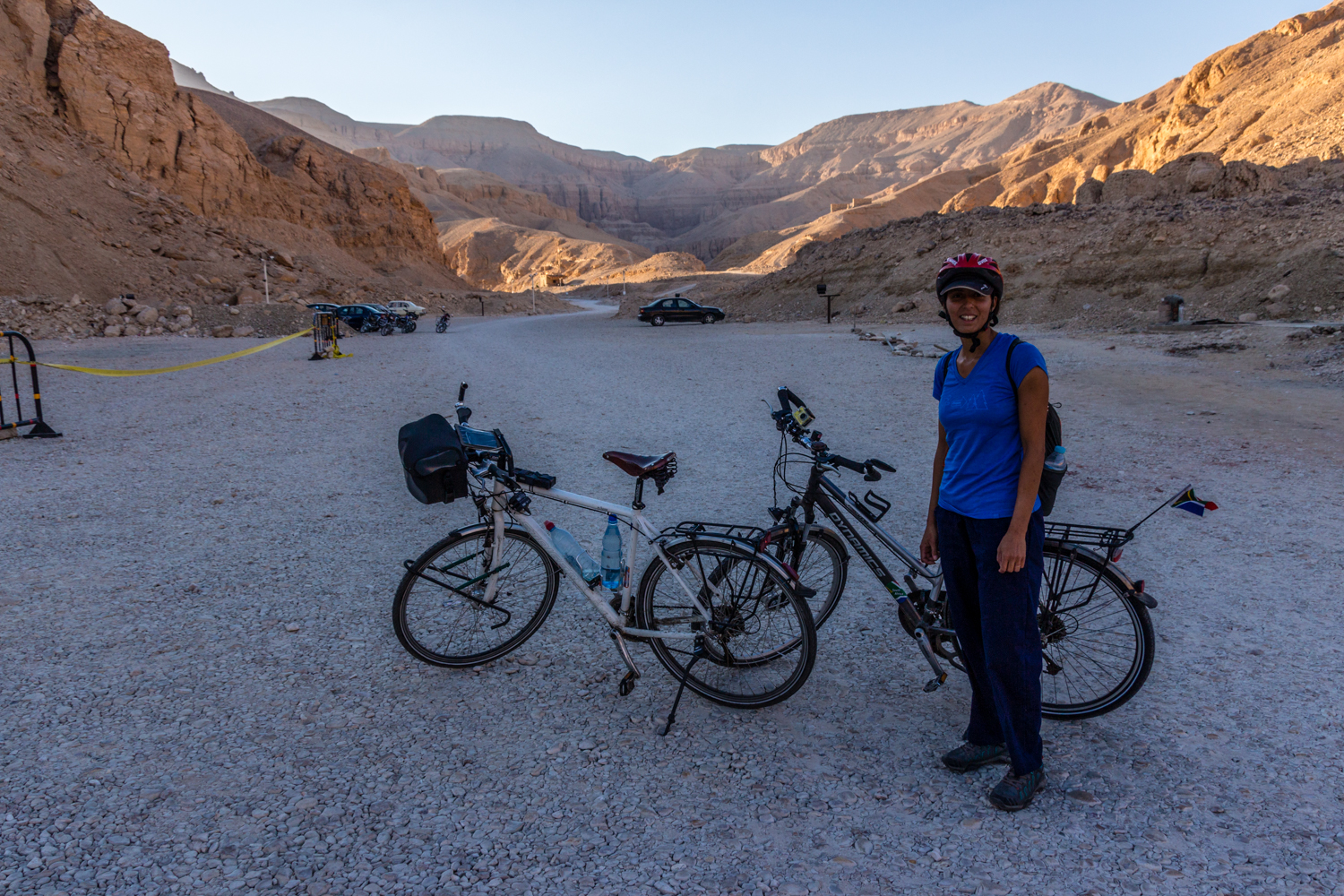 Cycling to the Valley of the Kings

Though, we had some drama first. Our host, Ahmed and his wife (who keeps the place clean and cooks good food) owns, lives and runs this place. Ahmed was extremely nice at the beginning but on the second morning, things turned sour. Elinour was early so she came by with her taxi to the camp. A few minutes later we heard some screaming on the road in Arabic but had no idea it was our host, Ahmed, and Elinour, our tour guide, fighting. Simon came out and saw him spit in her face – we rushed out to the car and left but found out later that he had attacked the taxi driver, smashed his window and then when she intervened he grabbed her, kicked her and pushed her to the ground. Her hair was covered in leaves, her hand was scratched and bleeding and her sunglasses damaged. 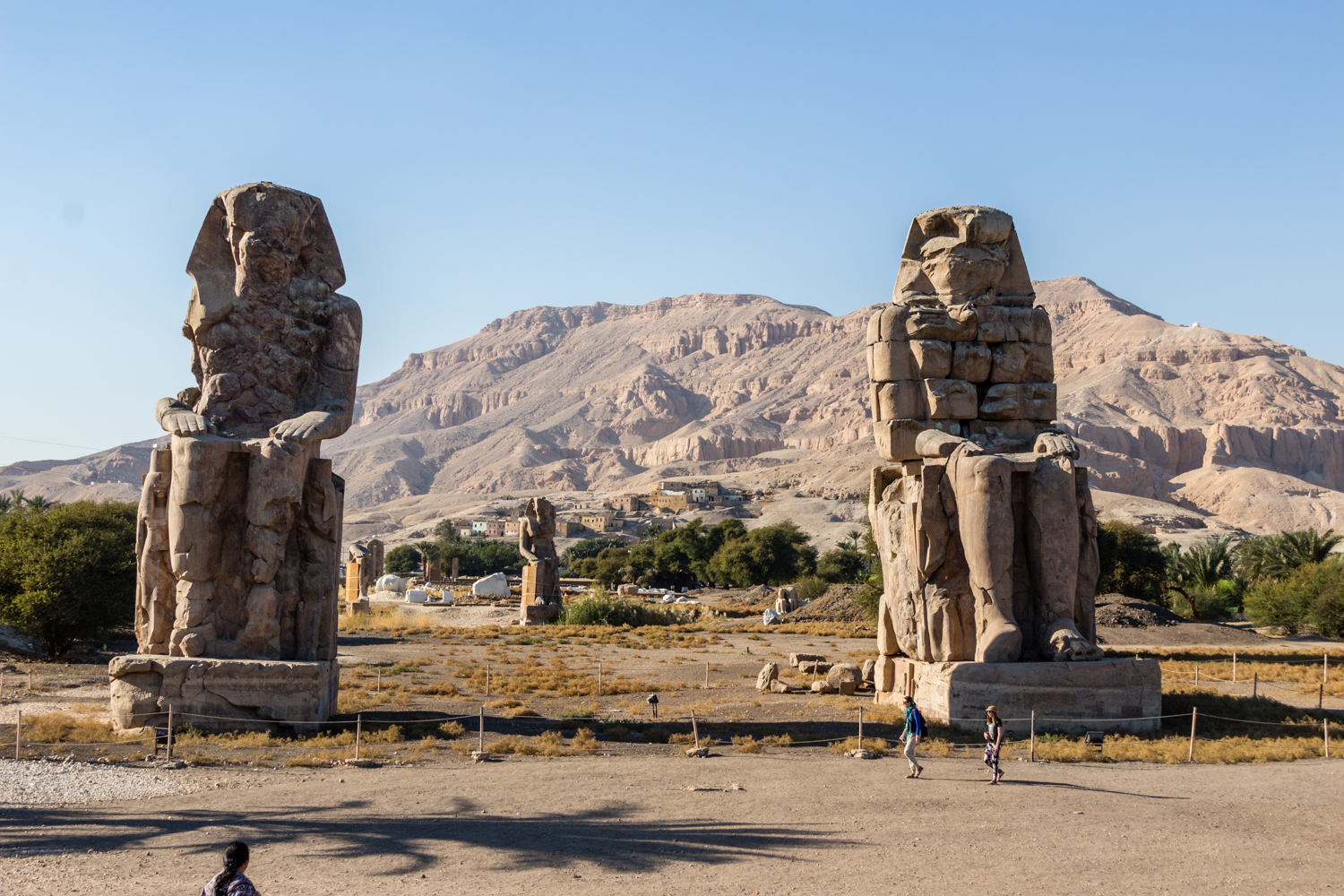 The Colossi of Memnon

We went to the police at the temple and they took a statement and visited him that same day. After reading some reviews on Hostelworld.com, we realised that this has happened many times before. According to the reviews, he makes commission on arranging tours and if any tour guide / taxi shows up at his place he goes crazy. Apparently, he also likes to smoke marijuana, get drunk and talk about obscene things. You can never really know someone by first impressions!

What was impressive was how Elinour maintained her composure and was adamant that we should still do the tour that day. It was even hard for us to concentrate but somehow she could completely focus after being physically assaulted! 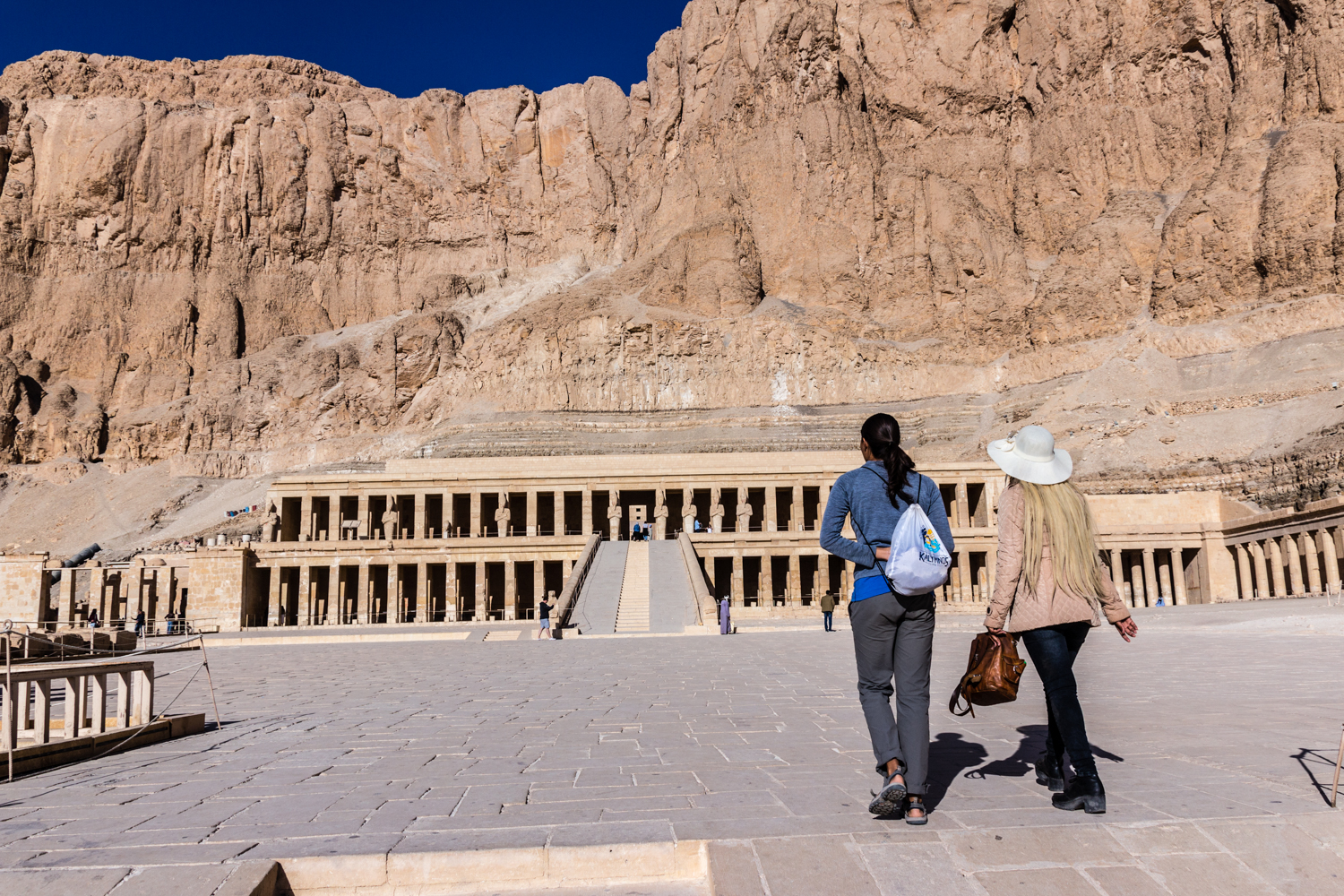 Queens Hatshepsut’s Temple, built by the second female pharoah (there were in total three), was a place where bodies of dead royalty could be mummified and prepared for the afterlife. Her life and story is fascinating and one that we know about only because of the architect and priest Senenmut. Her stepson tried to erase her from history by destroying any evidence of her. A classic example is the Temple of Queen Hatshepsut, where her life is depicted. Many carvings and text were replaced by her stepson with his own image and his own name. Thanks to the tomb of her architect, Senenmut, and his love for her, we know the truth. Her story is written and depicted all over his grave and he even carved a tunnel into the mountain to join their spirits in the afterlife, since they could not be joined in this one. 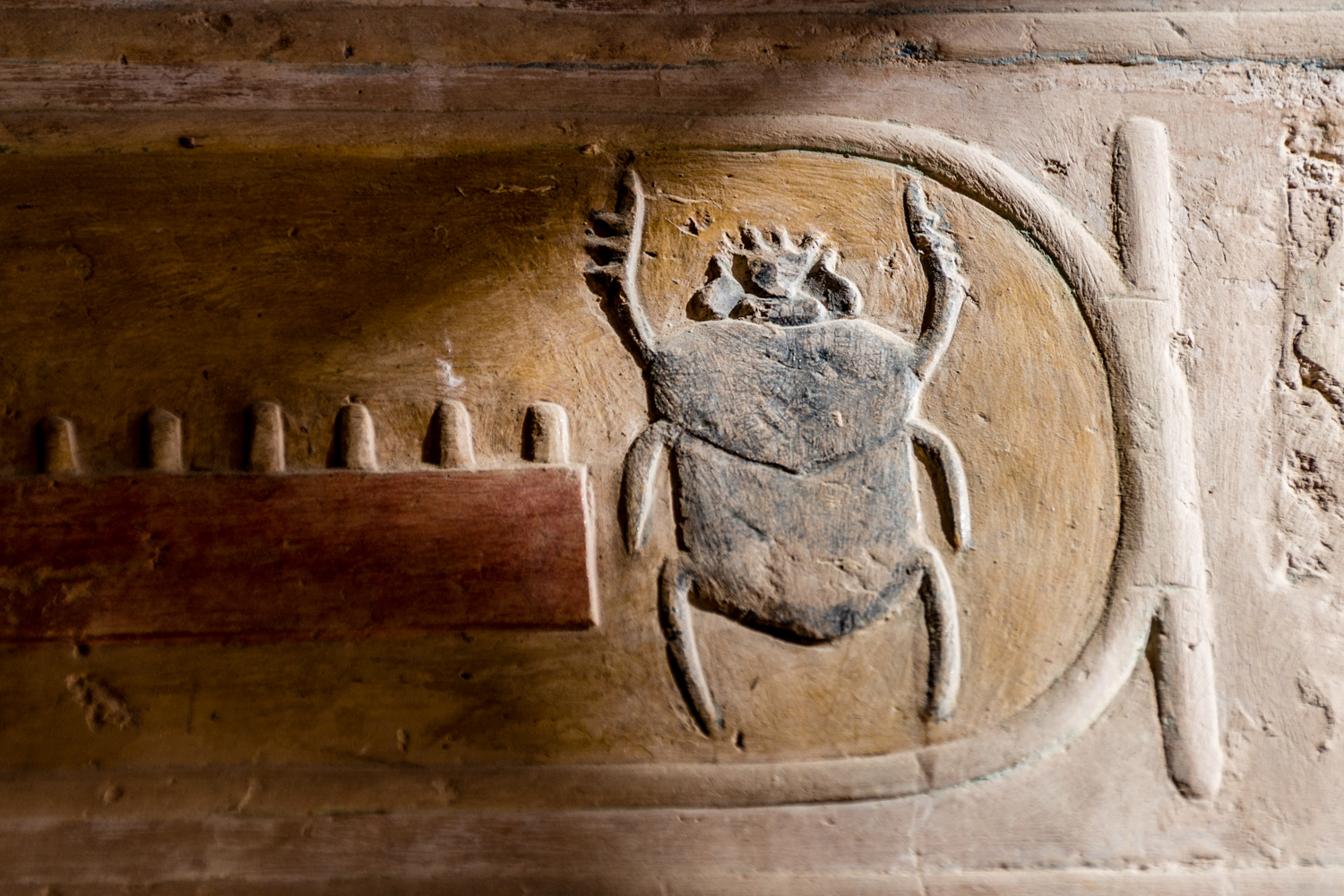 The dung beetle, a symbol of good luck

At the Valley of the Kings, the tombs are hidden in the magnificent desert mountains. The bodies of pharoahs and others crossed the river to the West Bank to be buried in peace after mummification. Secret tombs were carved into the mountains, filled with treasure and closed with rocks and stones to look part of the landscape. Most of the treasure was stolen during the 18th/19th centuries when the first archeological dig teams from Europe came over. A lot is now recovered but remains in museums around the world. 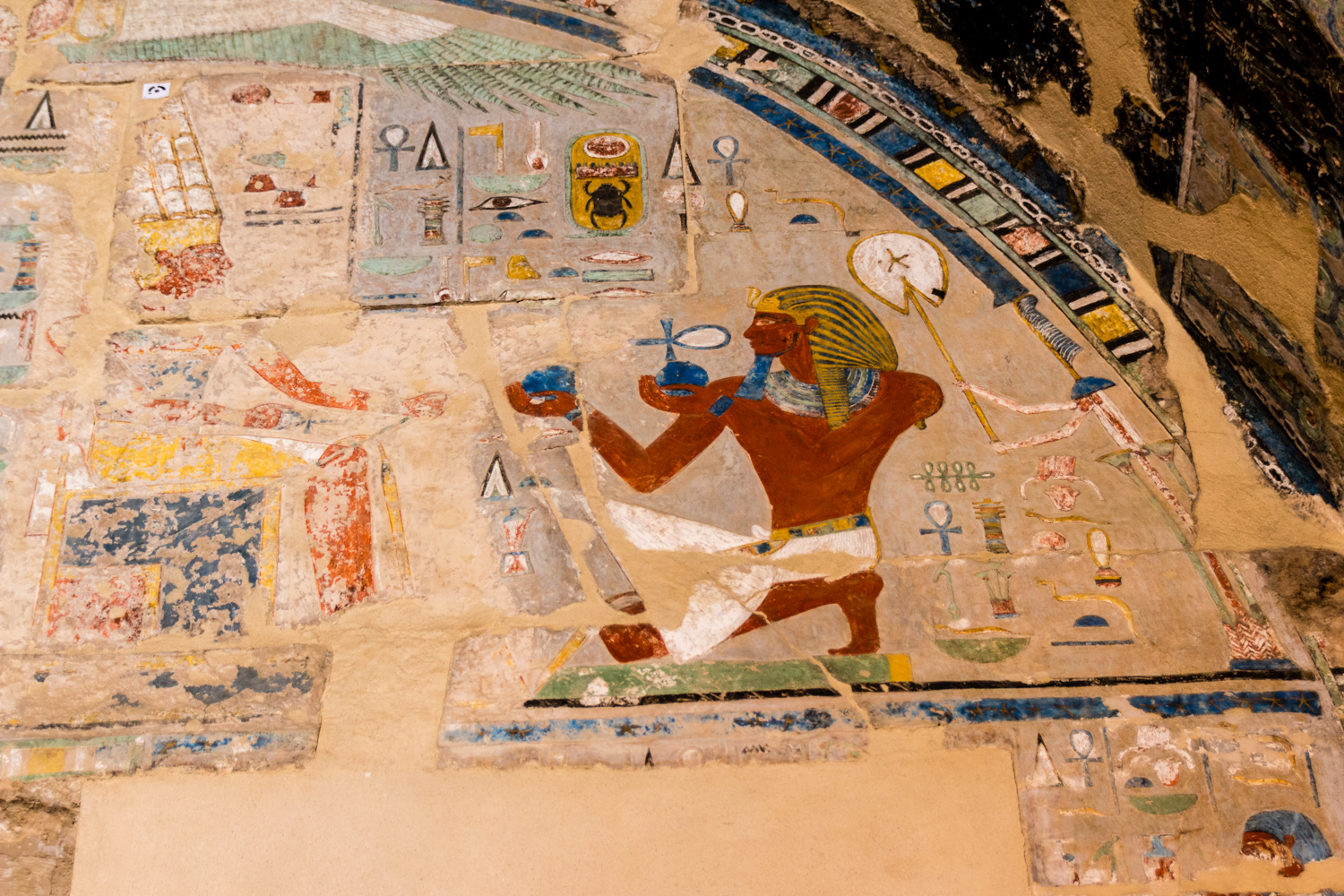 We returned to our bungalow and Ahmed later, immediately packed our bags and listened to him shouting about Elinour and bragging how he kicked her. The man is a drug addict and a woman beater. We just wanted to get out of there. We feel sorry for his wife though, who does most of the work there and who tried to diffuse the situation. We ended up in a much pricier place (100 L.E.) just down the road but at least it had a good view over the river and Luxor Temple and of course, no physical abusers around. 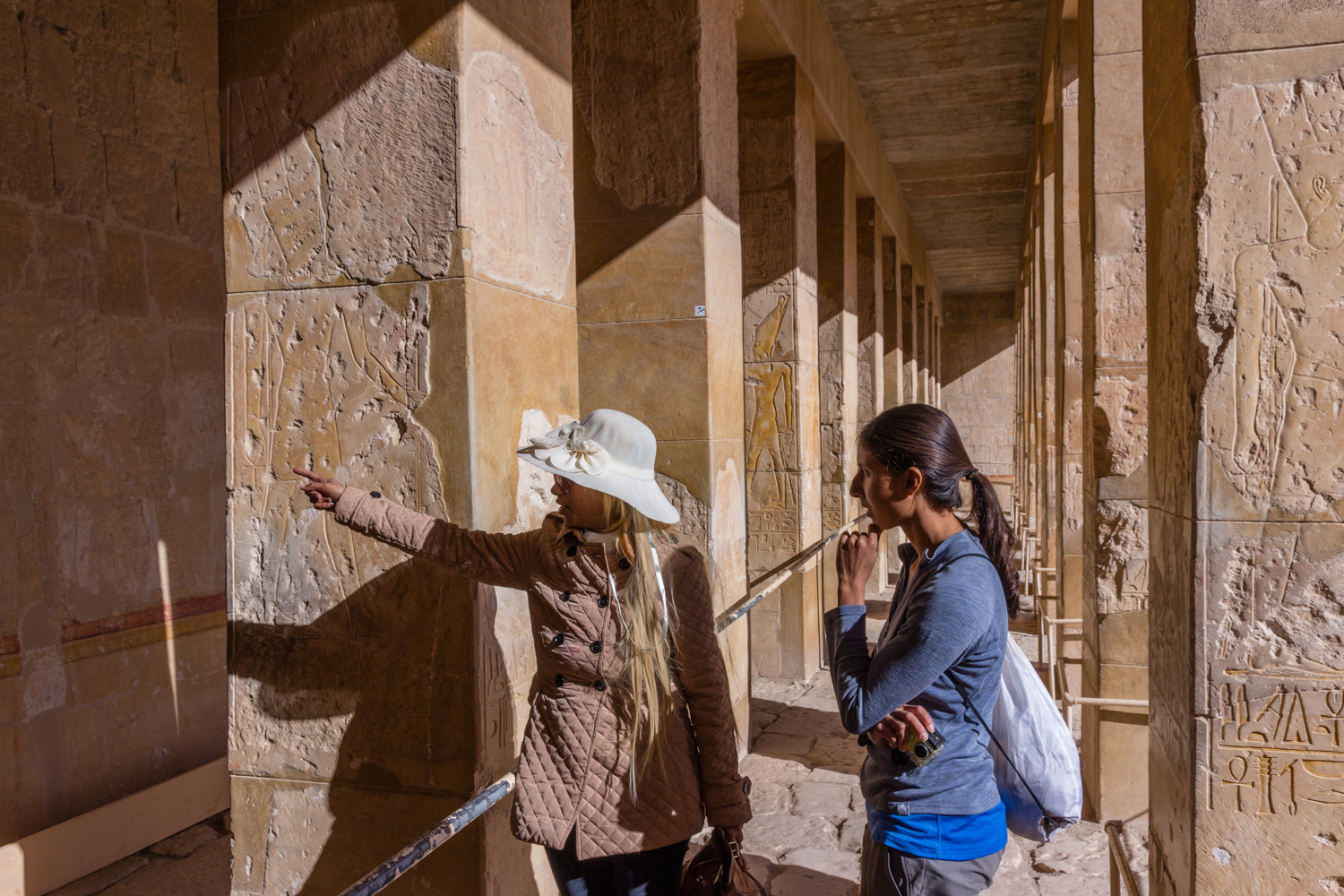 Elinour explaining the story behind the murals

What we found in Luxor is that the mood had totally changed from our experience further north along the Nile. A lot of people see us as ATMs rather than actual people here. Taxis, horse carts and of course felucca, felucca, felucca salesmen would follow and harass us. Little did they know that Tanya has a short fuse for salesmen by now! 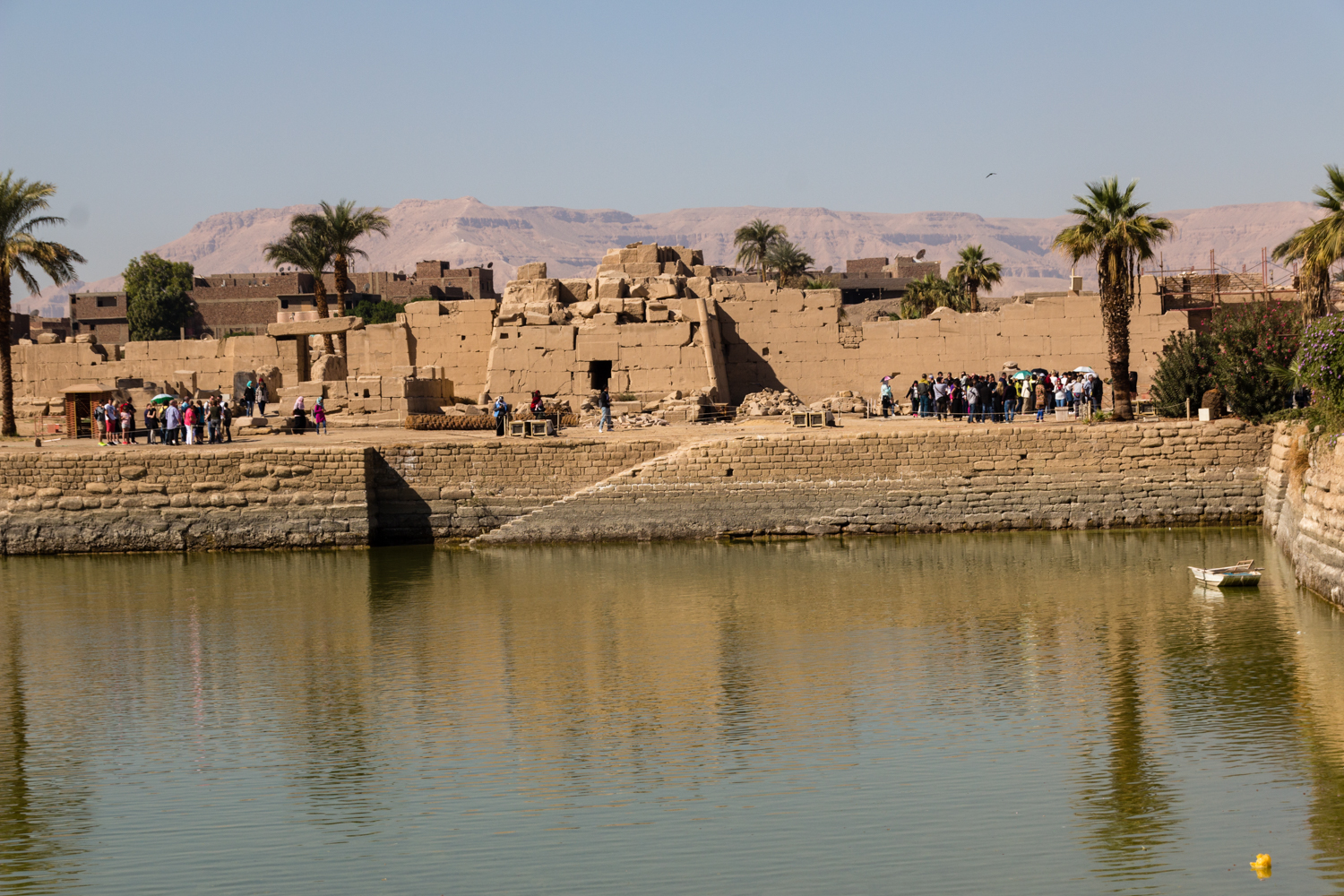 The Nilometer at Karnak Temple

This ATM mentality has also spread to the kids as well – many young children regularly ran up to us shouting ‘money, money, money’. No “hello”, no “welcome”, just “money, money, money”. The difference is astonishing. Luxor, you were a beautiful and fascinating part of our trip! Time to leave you with mixed feelings. Fingers crossed for the road to Aswan.