Italia. Things on our to do list: espresso, pizza, wine and a refreshing swim in the sea. As the country changed, so did the cycle path. Almost immediately, we changed on to what was an old railway track, now turned into a paved, smooth cycle path. 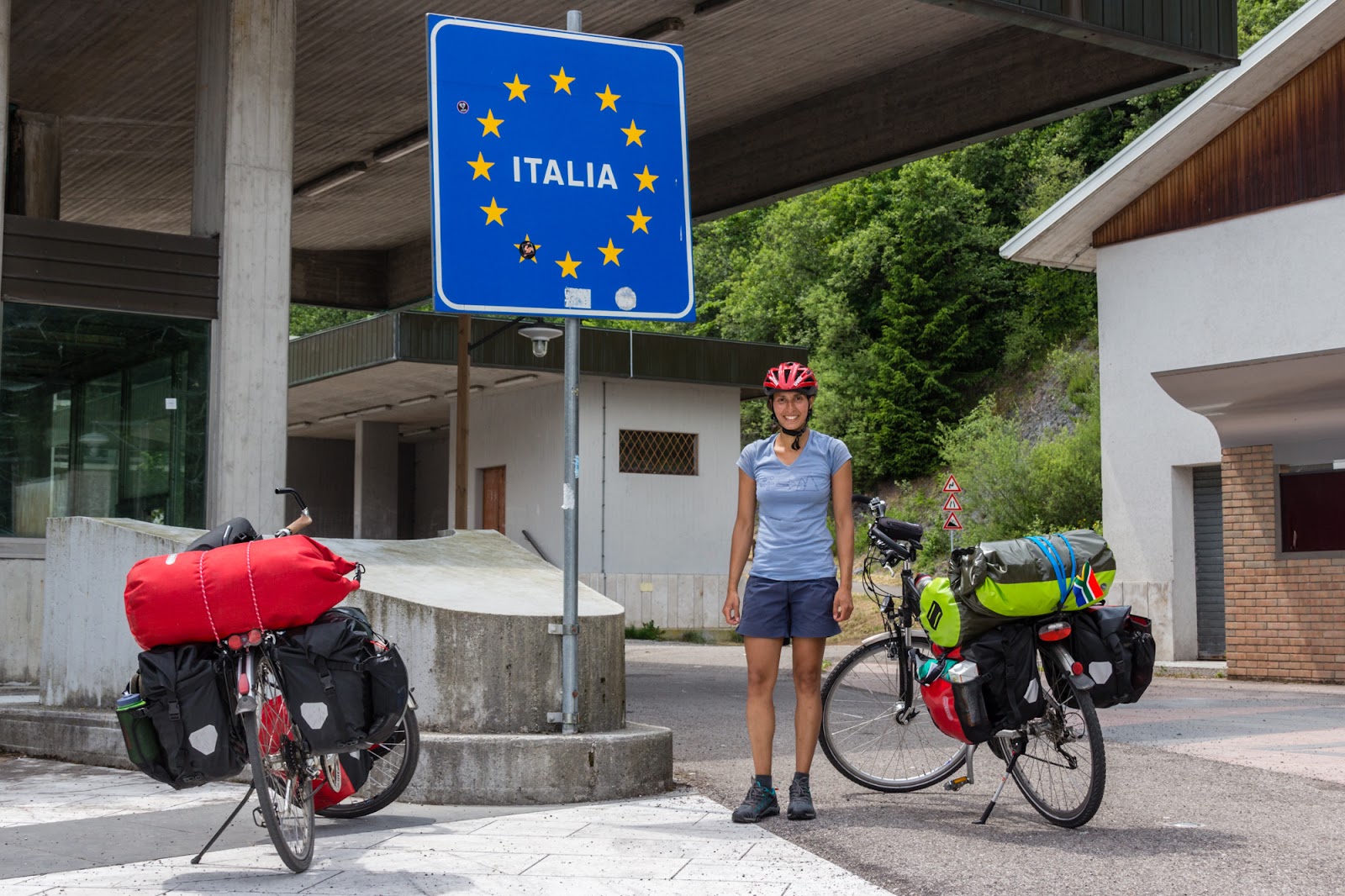 It was so pleasant to ride on that Tanya could only refer to it as the “Cycle Highway”. It was really a highway for cyclists. Two lanes, one in each direction, paved, completely separate from the cars. 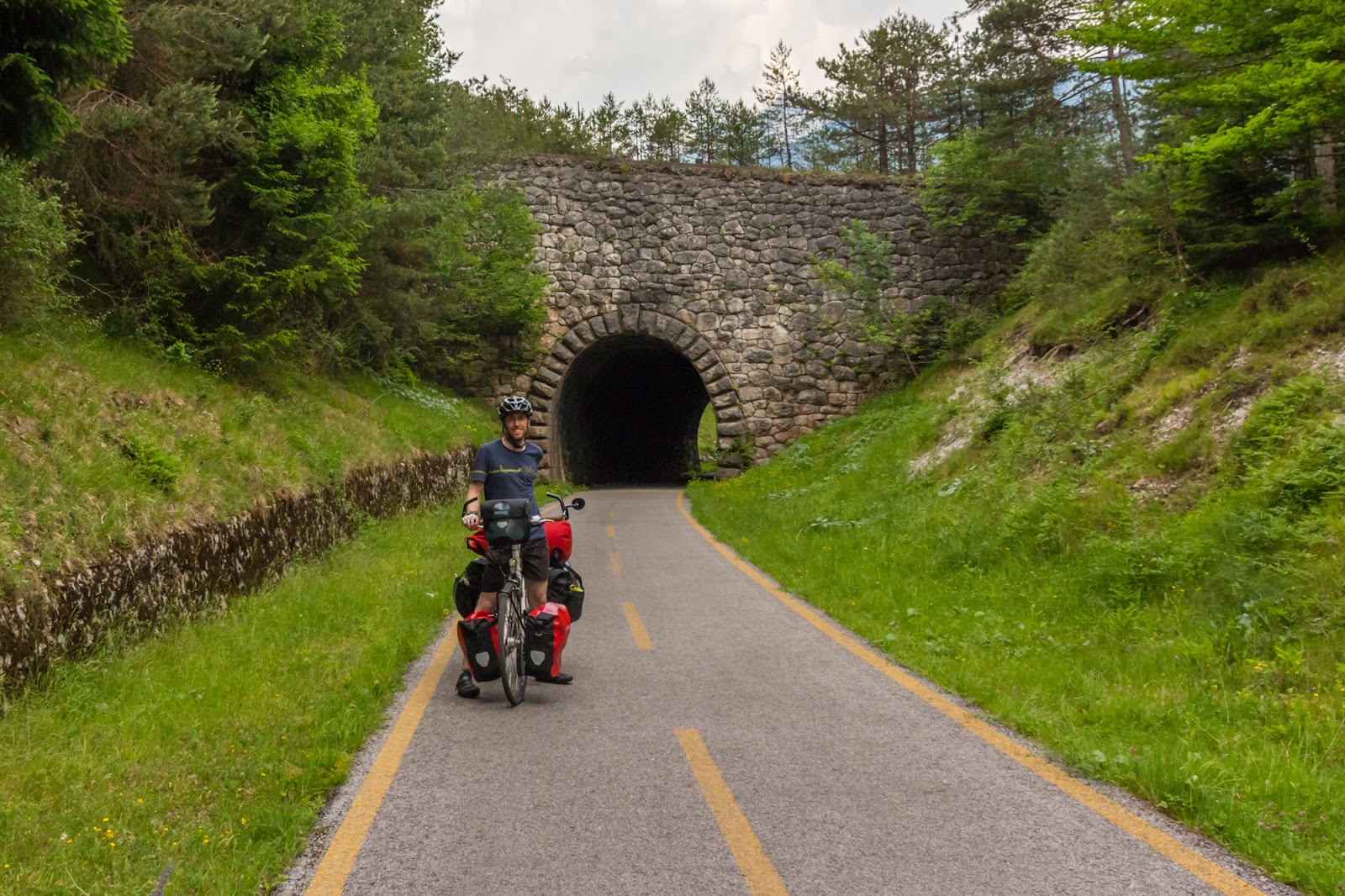 The cycle highway after entering Italy. One of the many tunnels we cycled through.

We actually thought we had a hard first day in Italy ahead of us because of the elevation change. Instead, we found that it was a genius idea from the Italians to convert an old railway into a cycle path – the gradual elevation change and tunnels through the mountains made riding so pleasant. Not only that, but we were still spoilt with incredible views as we twisted through and across valleys, passed high over rivers and watched waterfalls alongside us. 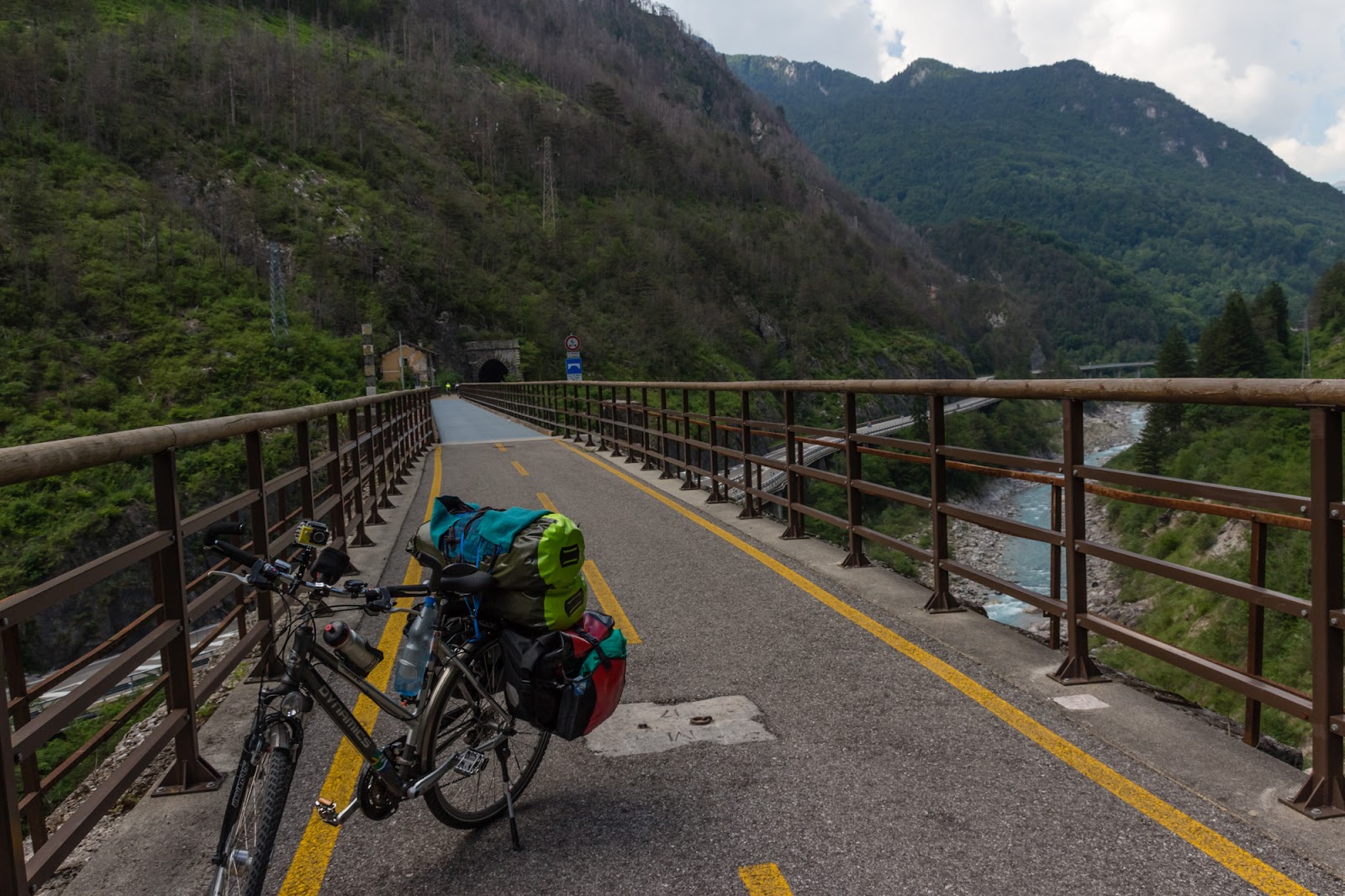 Lots of high bridges just for the cycle path

When I first told my brother that I was going to do this trip, he said: “Tanz, you’re going one way and the refugees are going in the other!”

Low and behold, just passed the Italian border we met two refugees going in the other direction. They were very open and told us straight away that they were asylum seekers, that they had made the journey from Ghana and were looking for the Italian/Austria border. They were fluent in English and well spoken.

As we were on our bicycles we were not much use to them… but pointed them in the right direction. They were carrying all their possessions in a large suitcase, and still had 2 km to the border. 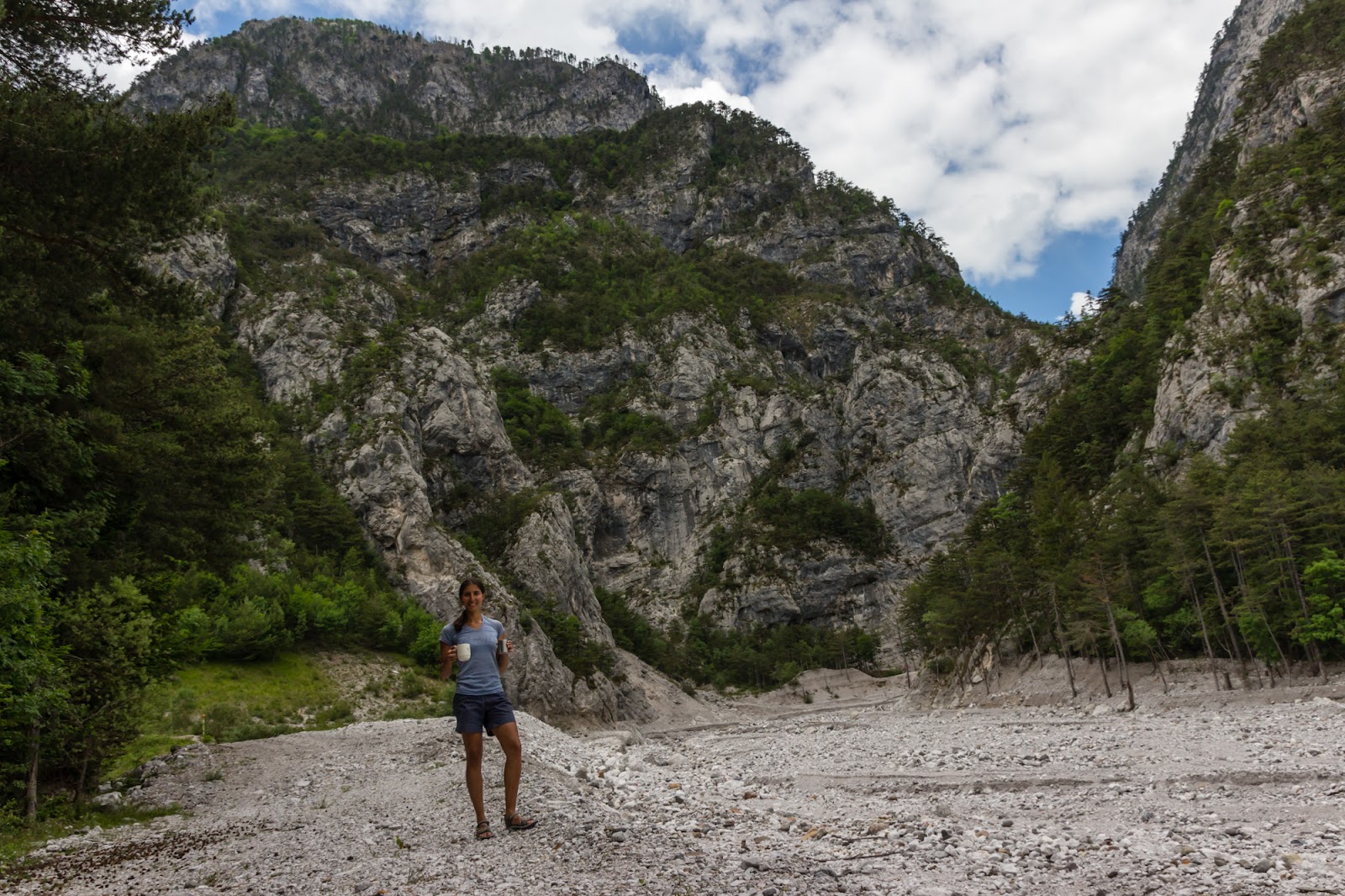 Our first wild camping spot in Italy, right next to a canyon with climbing routes

That night we went about 100 m off the cycle path to an impressive canyon with the river Rio degli Uccelli going through it. There also happened to be climbing routes on a small section of it… so we just said: “Yip, we’re wild camping here”. We spent the late afternoon exploring the canyon and the next morning climbing in it before we continued on the cycle highway.

We then headed towards Venzone, a cute historic town with old stone buildings. We had just missed a festival as there was a full orchestra and people in costumes roaming the street. 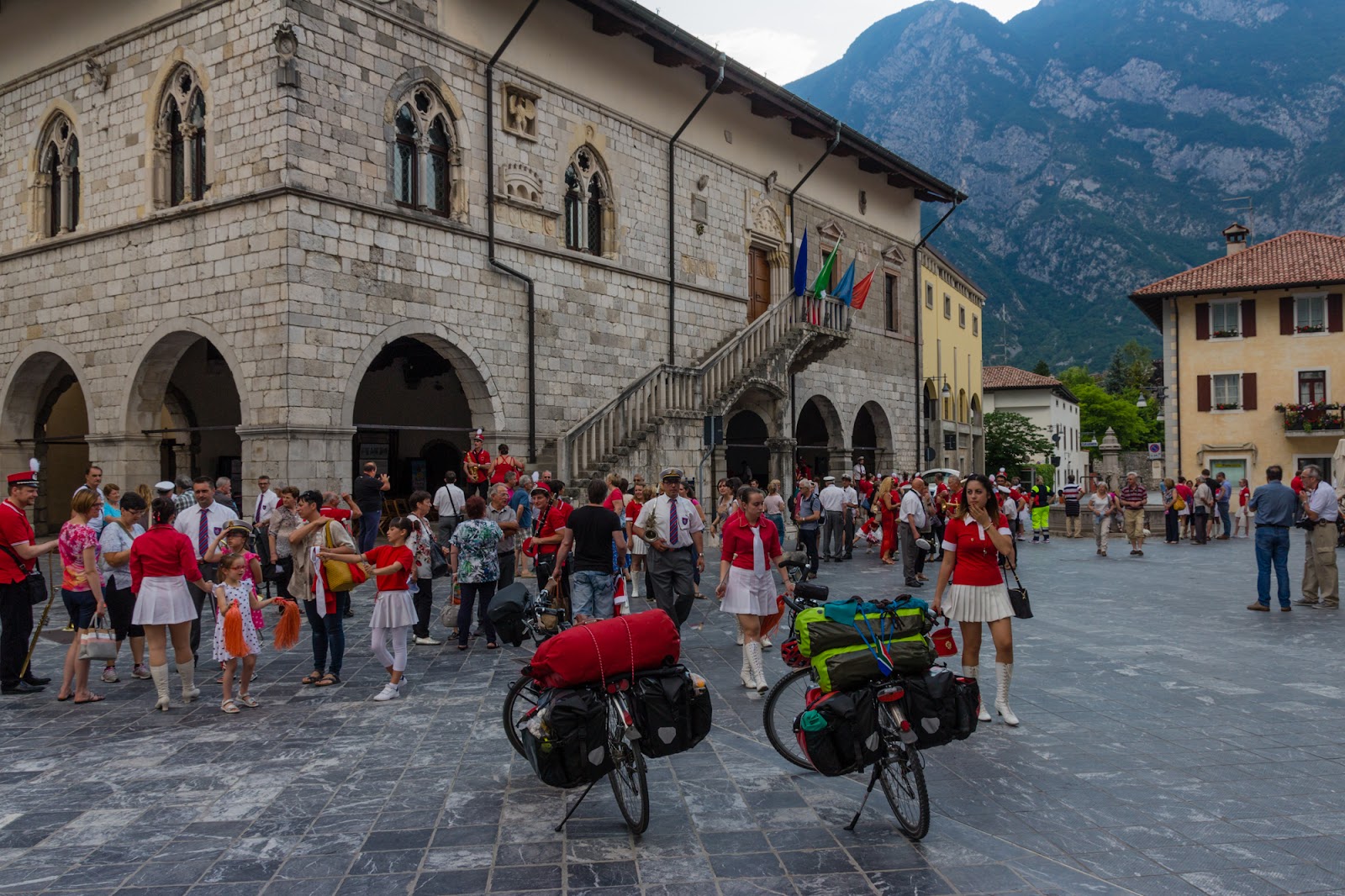 We made our way out of the town and wild camped on the sand next to the river. In the morning, our tent turned into a sauna as the sun came up and we took a nice, cold dip in the river before breakfast.

Our next stop was Udine, a larger city but very picturesque. There we had an Italian espresso, made by an Italian, in Italy. Tanya’s first request done. We passed through Udine and found another great wild camping spot; Italy seems to be full of them. The only problem was that one of the loudest and scariest thunderstorms rolled in… but luck was on our side and it somehow just missed us. 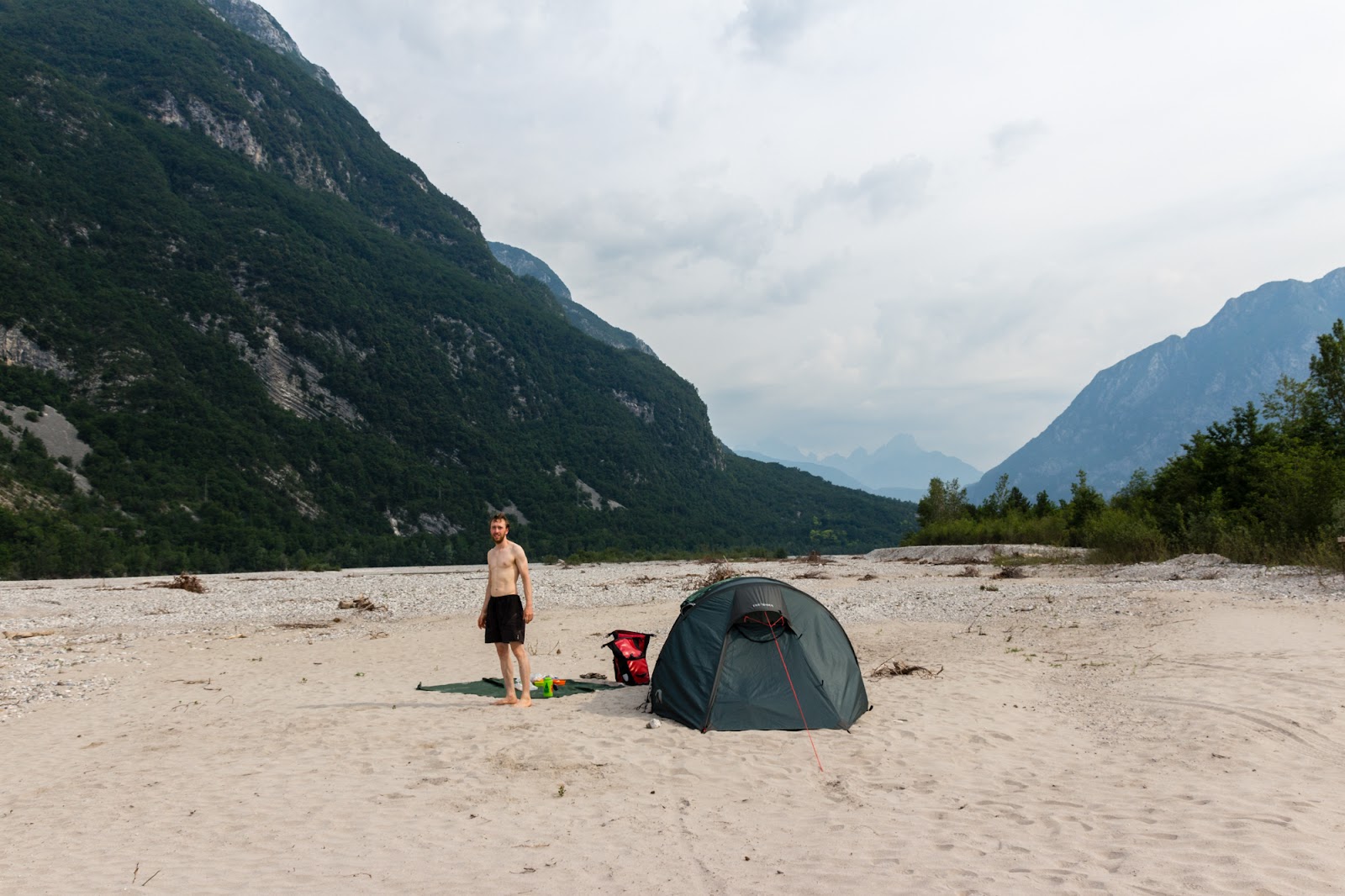 Another nice wild camping spot in Italy, right next to the river

The next day we hit the Adriatic Coast! We stayed next to Duino, a small coastal town with a castle perched on the top of a cliff. We finally got to jump in the sea and we also enjoyed some climbing on the cliffs next to the water. 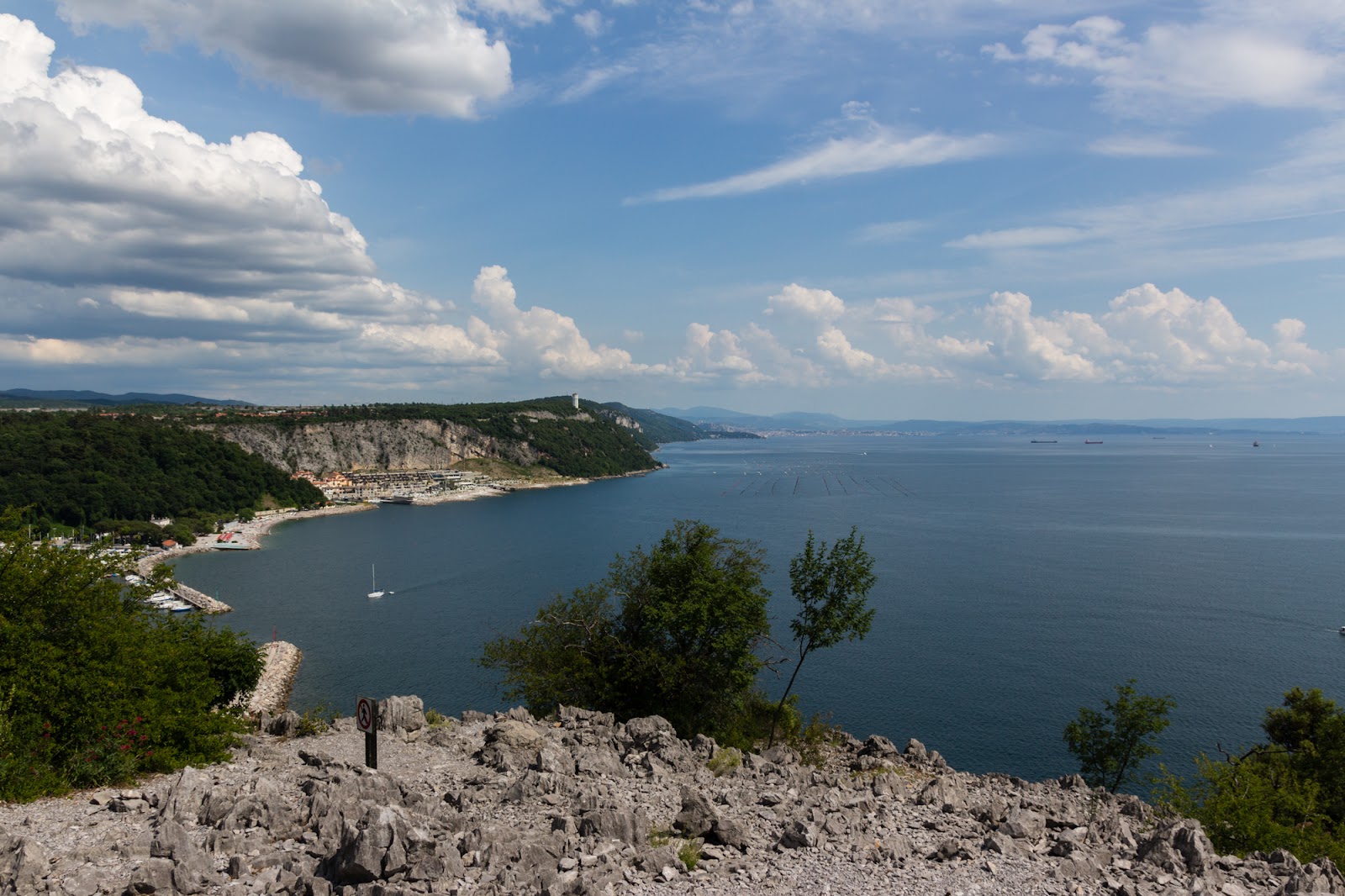 The first sight of the sea at Duino

At our campsite we met a couple – Wolfgang and Gaby. They had already done a long tour in Europe and parts of Northern Africa and this time round were on a smaller tour (www.mischisradtouren.de). It was great to spent a nice evening with them and we shared lots of stories. We also met a very funny Romanian cyclist, Benni, who warned us that there might be bears in Croatia when wild camping… that or wild boars. Was great to meet other cyclists with lots of experience on the road and get so many tips from them! 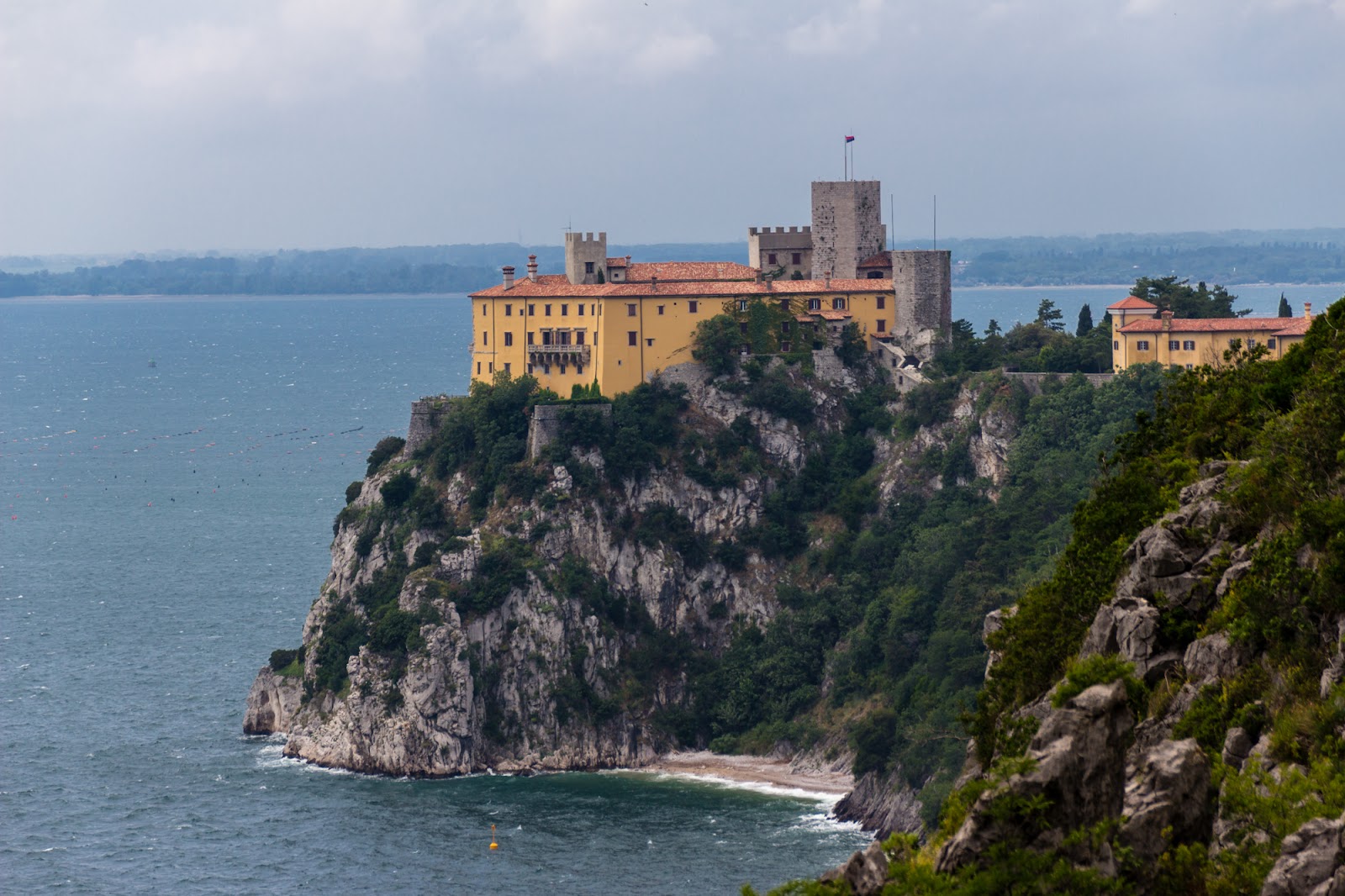 After a couple of days around Sistiana we headed towards Trieste. On the way, we did a slight detour to some climbing cliffs called Napoleonica. There we climbed with a magnificent view of Trieste and the sea!

They had shorter climbs with some routes quite polished, but the view alone was just incredible. What was also good was that there was an old street, now used for walking, where we could bike directly onto. Parking the bikes and the gear in front of the crag was very practical. 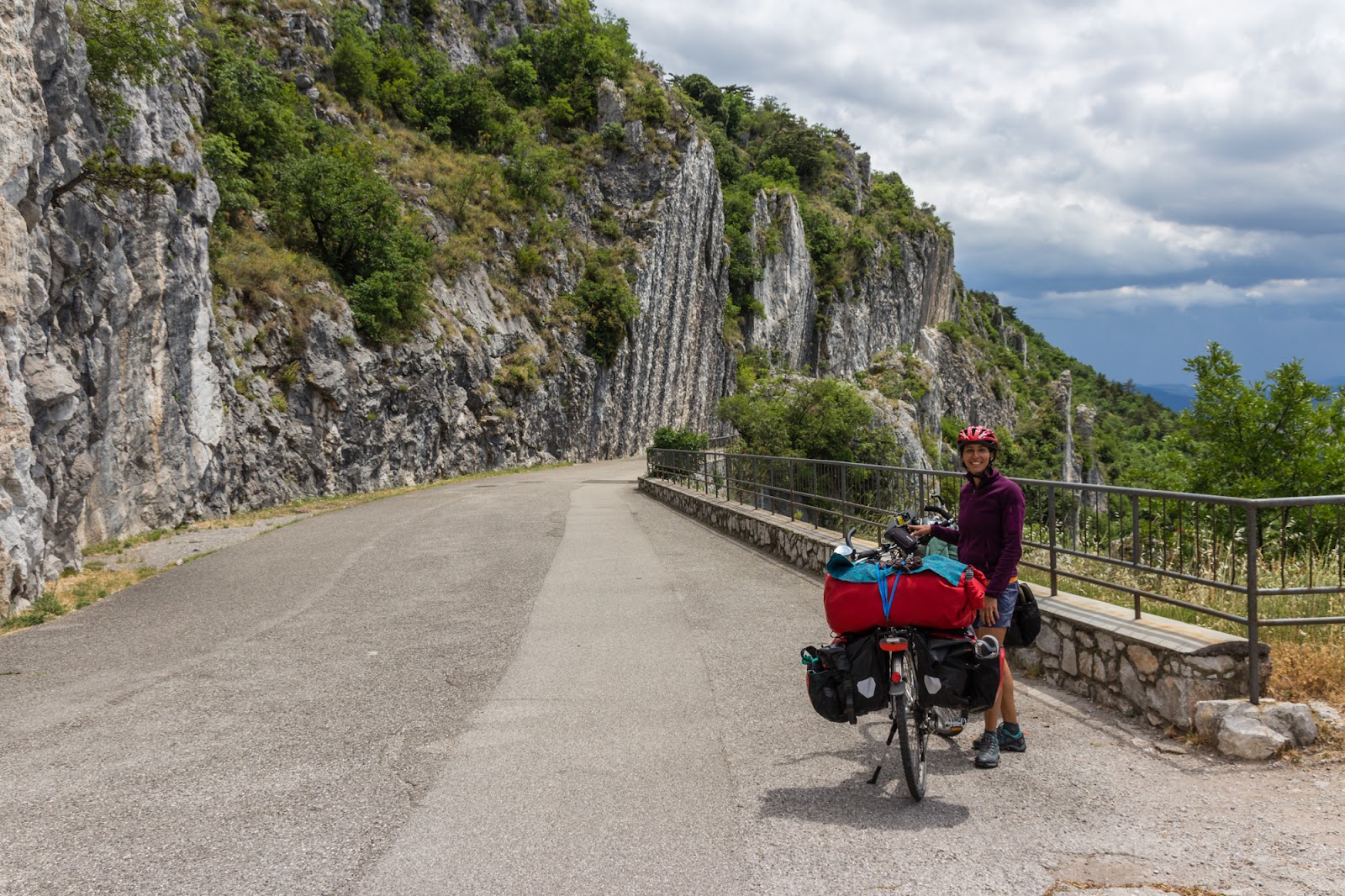 Climbing at Napolenica near Trieste, with an amazing view 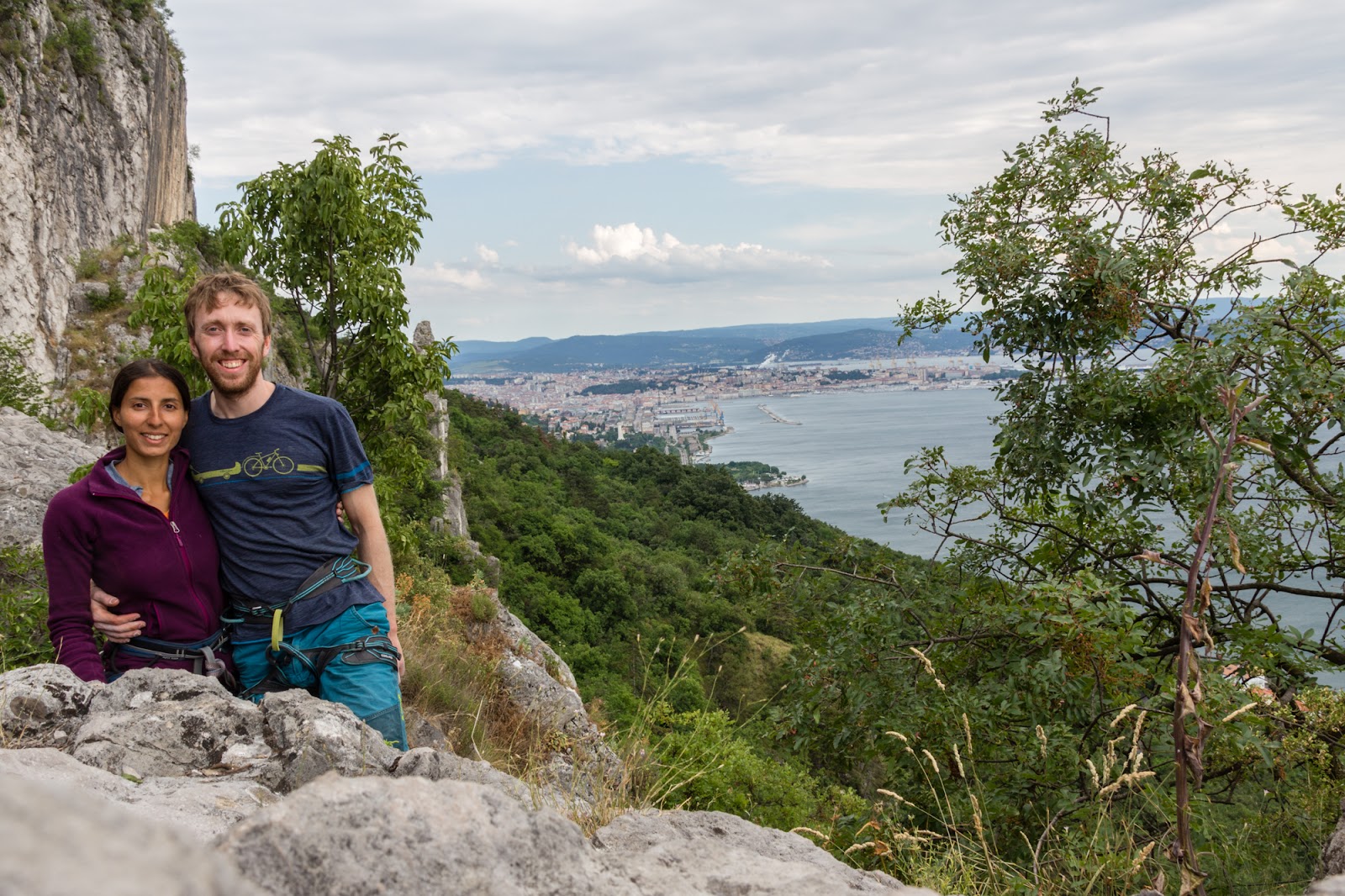 Napolenica climbing crag, with Trieste in the background

From there we biked down to Trieste and stayed with a warmshowers & couchsurfing host, Andrea. Andrea has hosted over 350 people in three years. Quite impressive!

This was our last stop in Italy. From here, we headed into Slovenia to climb, although we still regularly crossed the border. Besides, we still had things on our Italian “todo” list.

You can find more photos from Italy here.