On our first night at the campsite in Omiš, an adorable cat came over to say hi. She was fully grown but still tiny compared to most other cats we’ve seen. She was very lovable and cuddly and purred loudly whenever we stroked her. 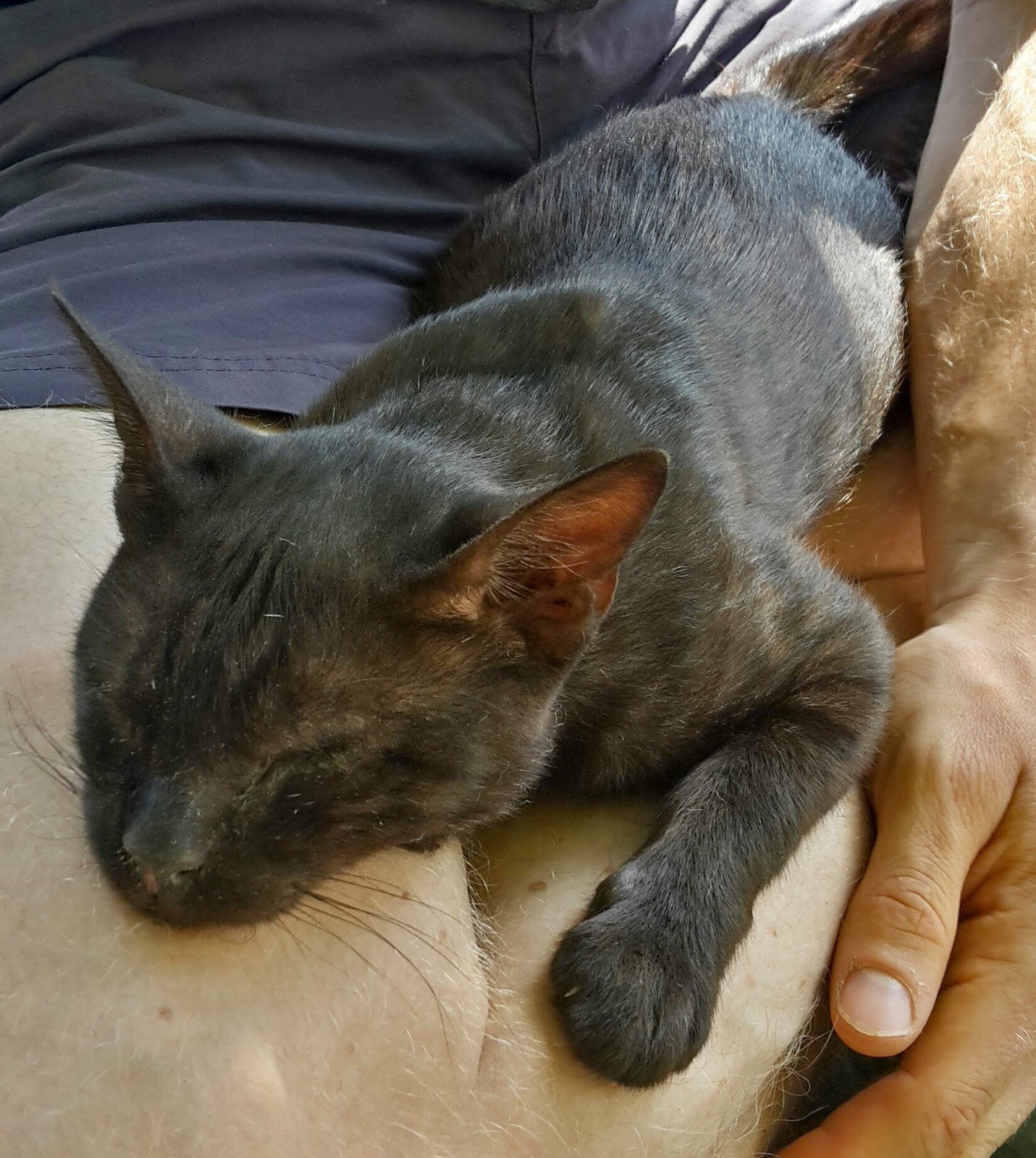 We immediately saw that she was not in the best health though – her left eye was full of pus, which had crusted over. Simon suggested that we wipe her eye out and when we did – lots of pus came out. She had a very bad infection!

We went to the vet in Omis to see what we could do for her and bought some antibiotics. We also treated her eye with eye drops and an eye cream. Once the infection got better, we saw that she had already lost her left eye. Her right eye was cloudy and we were very worried that she would lose her sight completely. 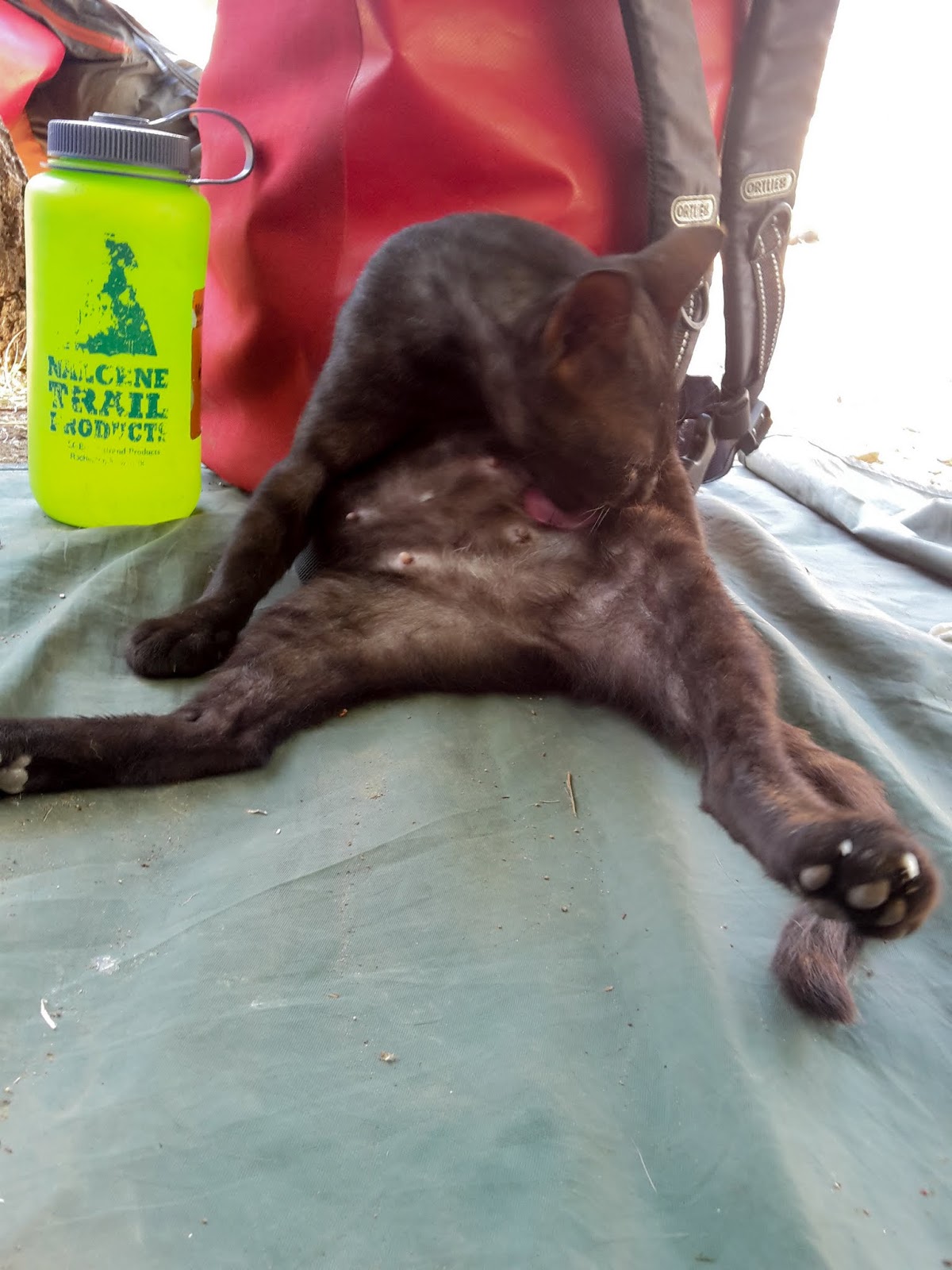 Yoga poses in the morning

We named her Mrs. Hook and as the week went by she became more and more attached to us – sleeping outside our tent at night and giving us cuddles on the lap in the morning. Whenever we came back from climbing she would be waiting for us, meowing loudly to say hello.

She also provided us with regular entertainment. We enjoyed watching her morning yoga program, which included doing the splits up in the air while she cleaned herself. Despite her large belly she is very flexible! She also regularly used our climbing bag as a sofa to lean against, obviously learning from us. Once, she even fell asleep on her water bowl after drinking, waking up only to realise there’s more water she needed to drink. 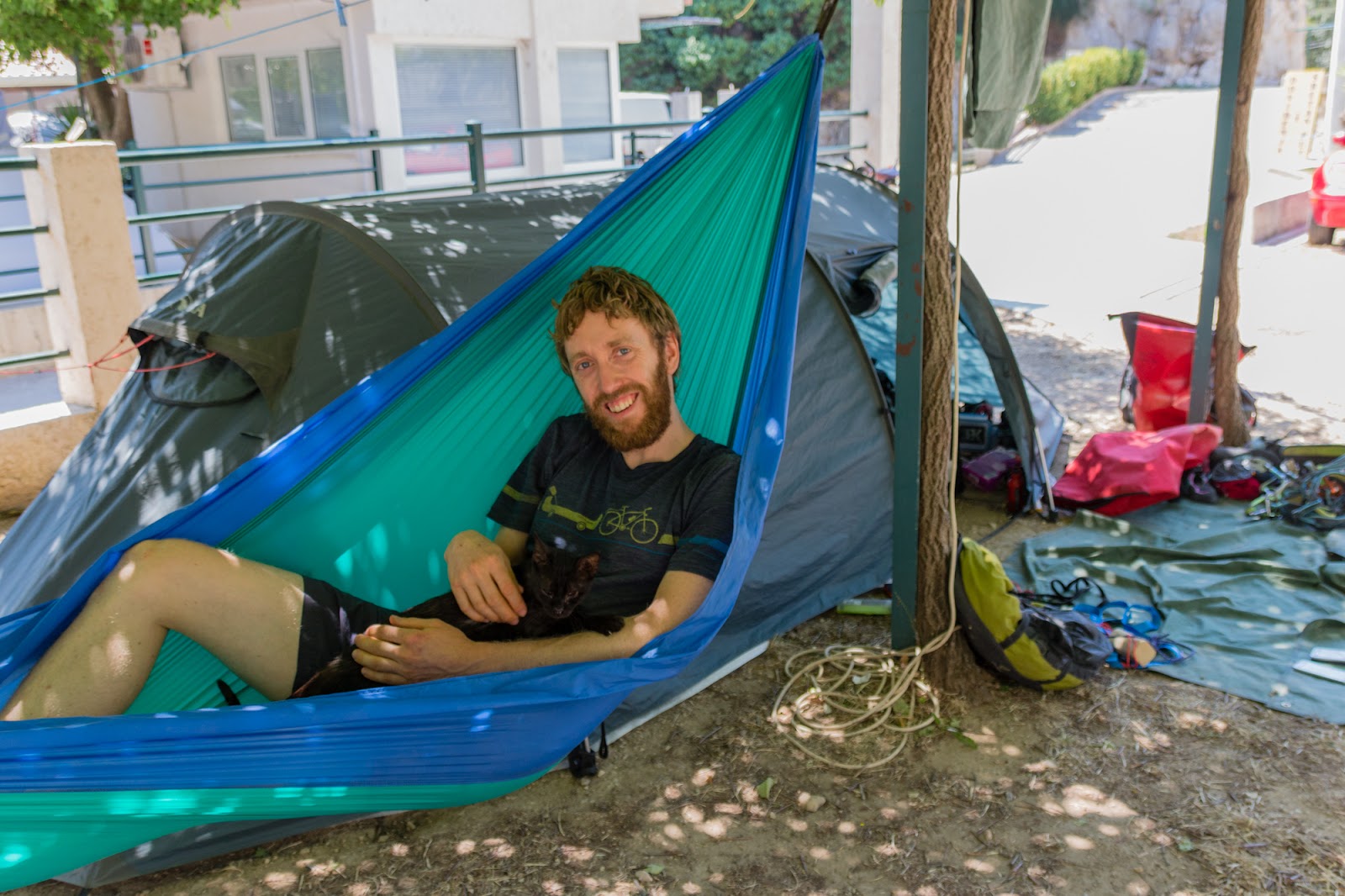 Simon and Mrs. Hook relaxing in the hammock.

It was also amazing how trusting and friendly she was and that we could treat her eye so easily. As the week went by we became more and more worried about what would happen to her when we were gone. Would she go blind? Is she pregnant? If so, would she survive the birth?

After some research – we found out about the Animal Protection Agency in Split that runs a dog shelter. We called them up and fortunately they agreed to have a look at Mrs. Hook and try to help her. 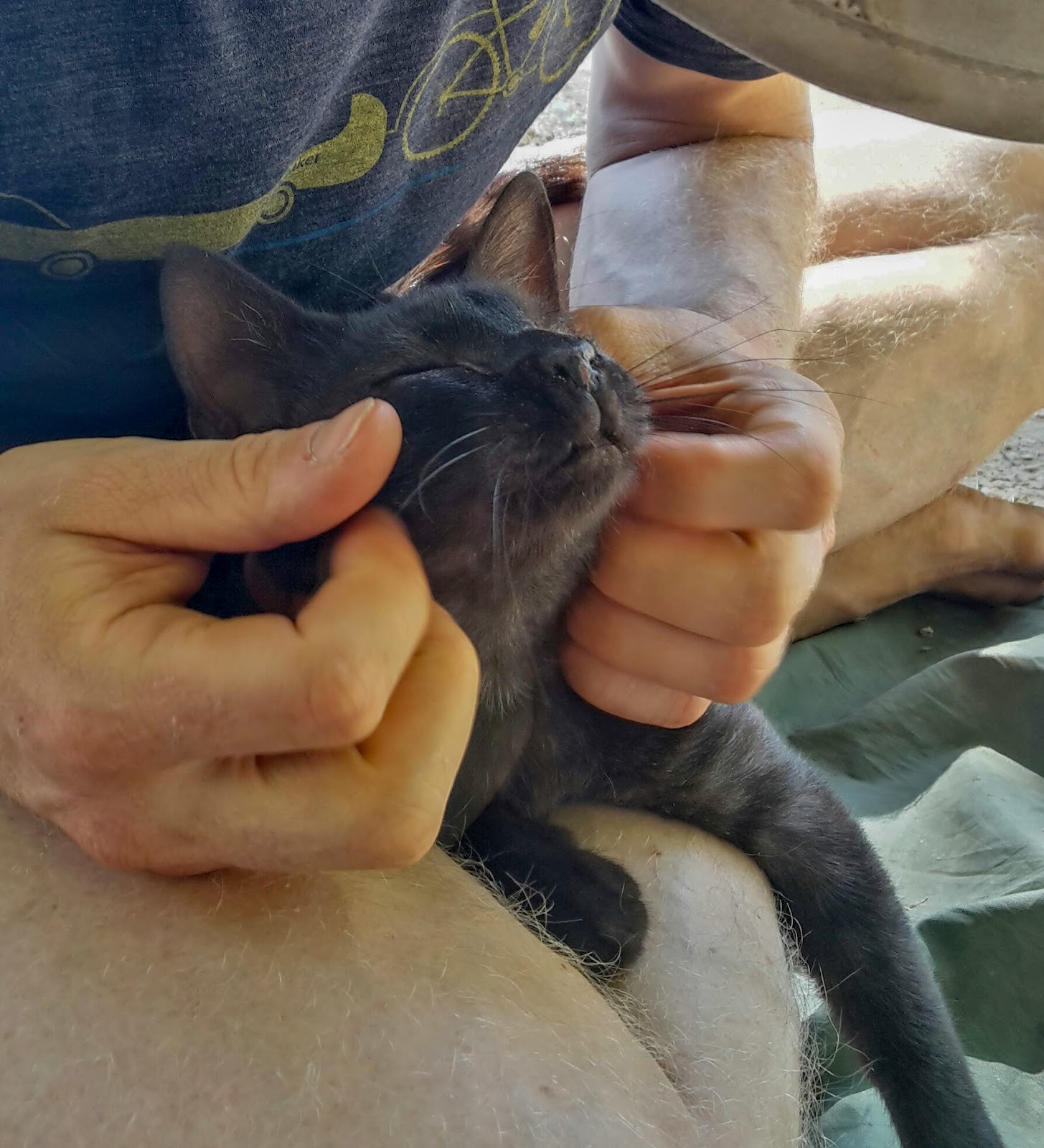 We ordered an Uber to take us to Split. The ride should be simple enough, right? Oh. My. Word. We could only describe this journey as 50 minutes in Hell on Earth. Poor Mrs. Hook – she had no idea what was going on and it must have been terrifying for her. At one point she went crazy and the next thing we knew, a volcano erupted and some brown material sprayed through the box and over us. We quickly wrapped the box with a towel and tried to contain the damage. She went even more crazy after the natural disaster as she was the one stuck inside!!!!

After what felt like forever we arrived at Dr. Filipova’s vetinary practice. We met Barbara, her daughter, there who is also training to become a vet. She was so friendly and helpful and we immediately felt welcome! They examined Mrs. Hook and explained the work they do with their non-profit organisation and their shelter.

We were both so impressed and inspired by them and their selfless work that we decided to cycle back to Split and volunteer at their shelter. They were very happy about it and we arranged to meet them on the Saturday evening. 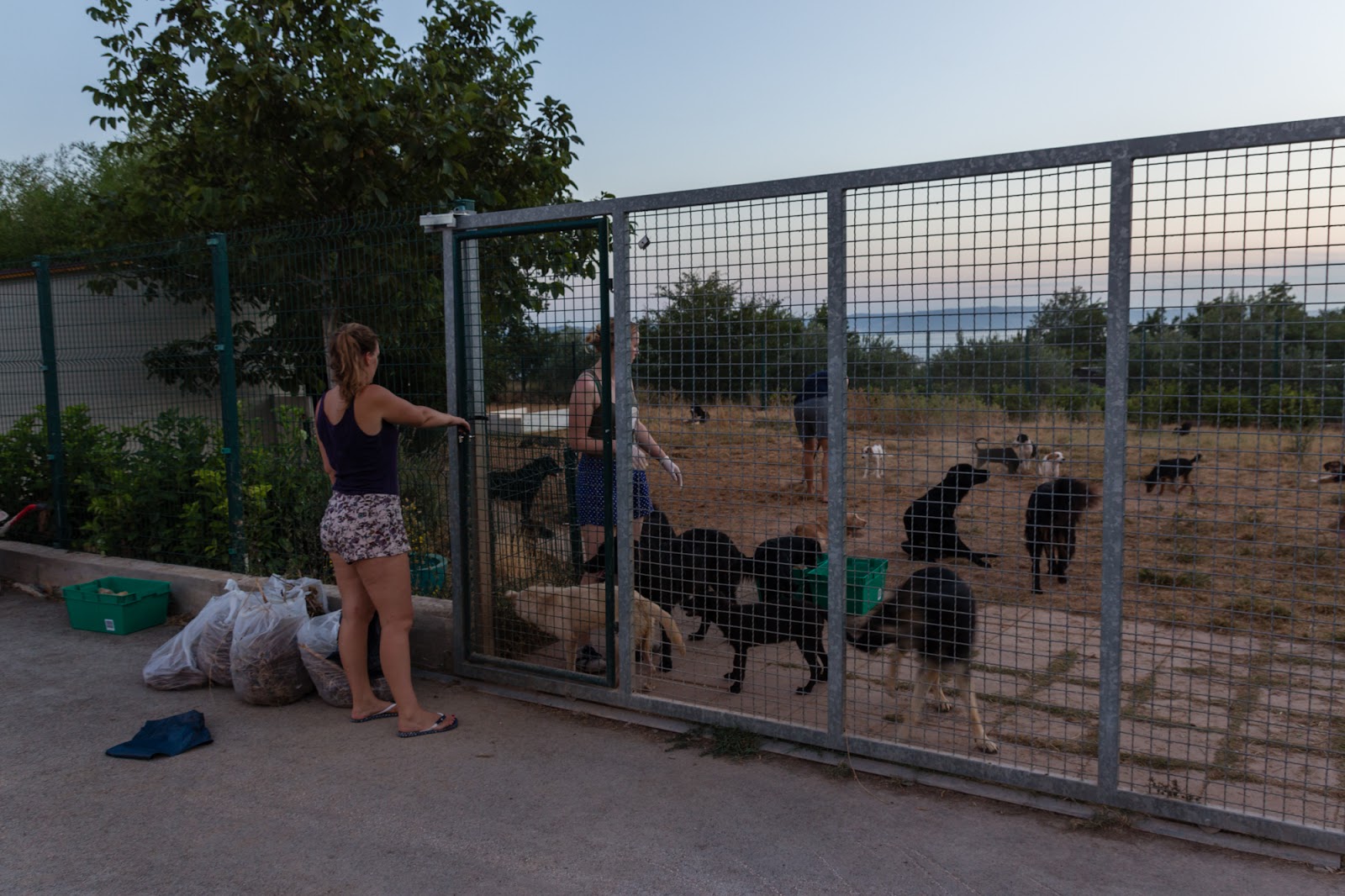 The shelter is run for dogs and it is called ‘Zaklada za zaštitu životinja Split’. It is the only animal shelter in Split and they have about one hundred very cute and lovable dogs (and also a few adorable cats) that all need homes. They have a Facebook page (https://www.facebook.com/animalprotectivefoundationsplit/) where you can see cute pics of the animals and follow their stories.

On our first day at the shelter, Barbara introduced us to the dogs… which meant going into the yard and having about 50 dogs giving you a hug at the same time! Definitely not complaining about all the love. We didn’t even know these animals yet they gave us so much of love and trust from the moment we met them. 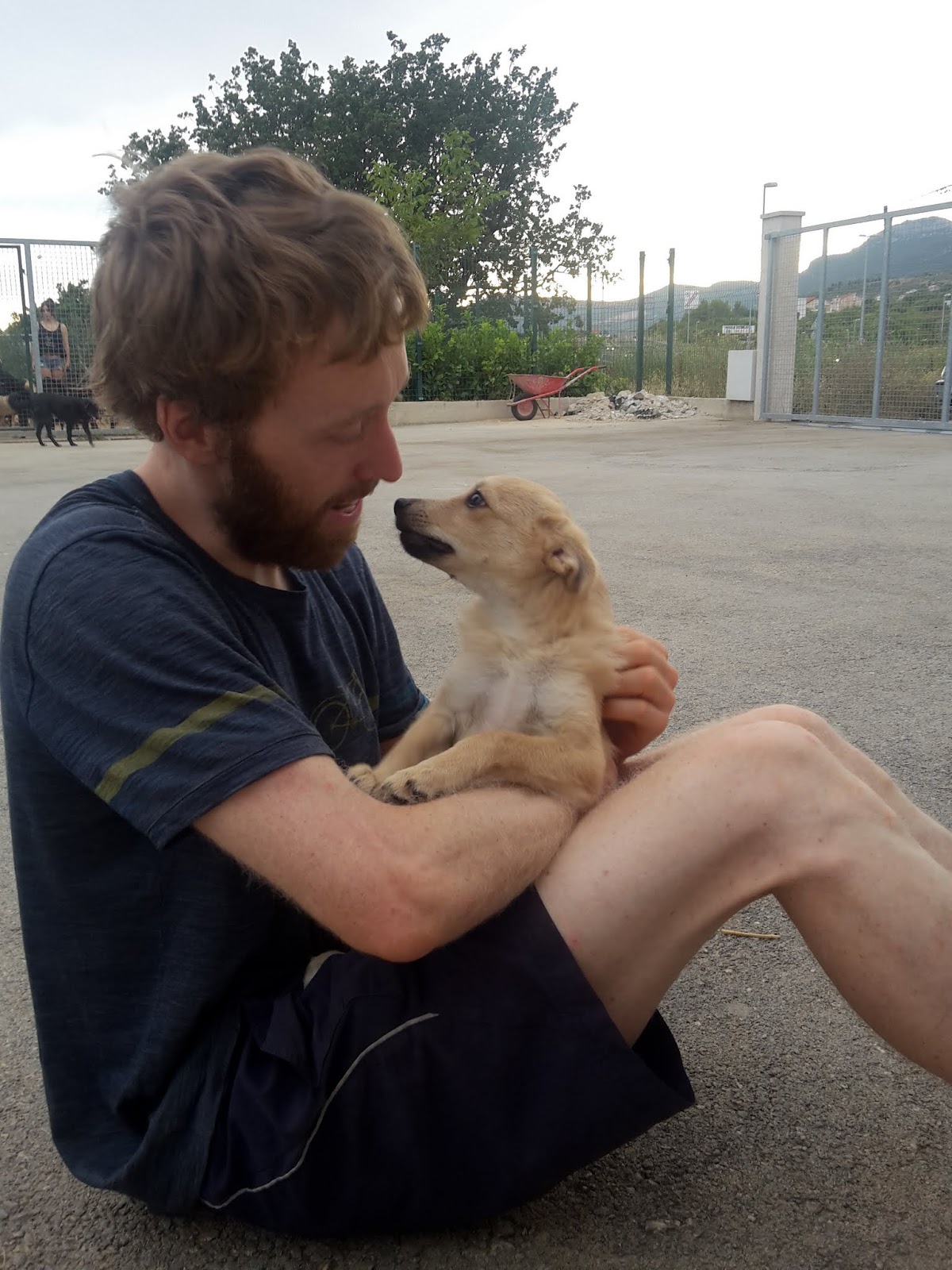 Simon having a new best friend!

Most of the dogs get along and so they have a big yard to run around on and play with each other. This is not usual for a shelter and is probably one of the many reasons why they are so happy.

Over the next few days we worked in the evenings at the shelter with Barbara and Zvoni and we had such a great time with them. They are such easy, outgoing and funny people that ‘working’ didn’t feel like work at all, but rather hanging out with awesome people while we happen to get something productive done. 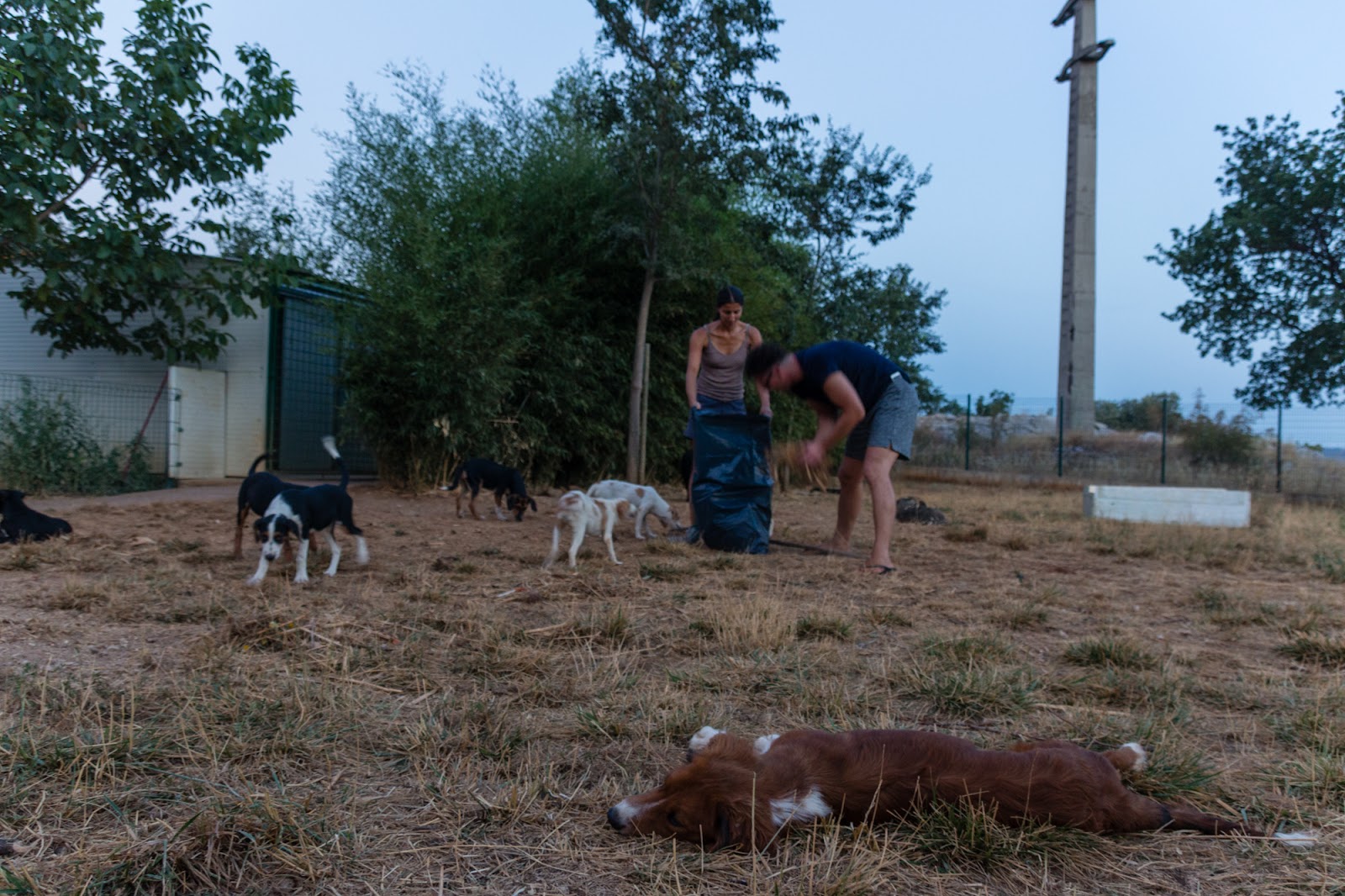 We removed poop from the field and learnt just how much puppies can poop. In case you didn’t know, the answer is: a lot! We also moved large stones from around trees, trimmed bamboo branches and removed ticks from the dogs. And of course, cuddled with them. At one point we helped a puppy whose head got stuck through a metal fence. It was quite stressful as he started to panic and other dogs became aggressive but Dr Filipovic arrived very calm, and with the necessary tools we got his head out.

There were many visitors who came to play with the dogs in the evening at the shelter, so afterwards they were completely done. They would just lye down and sleep while we chatted into the evening. 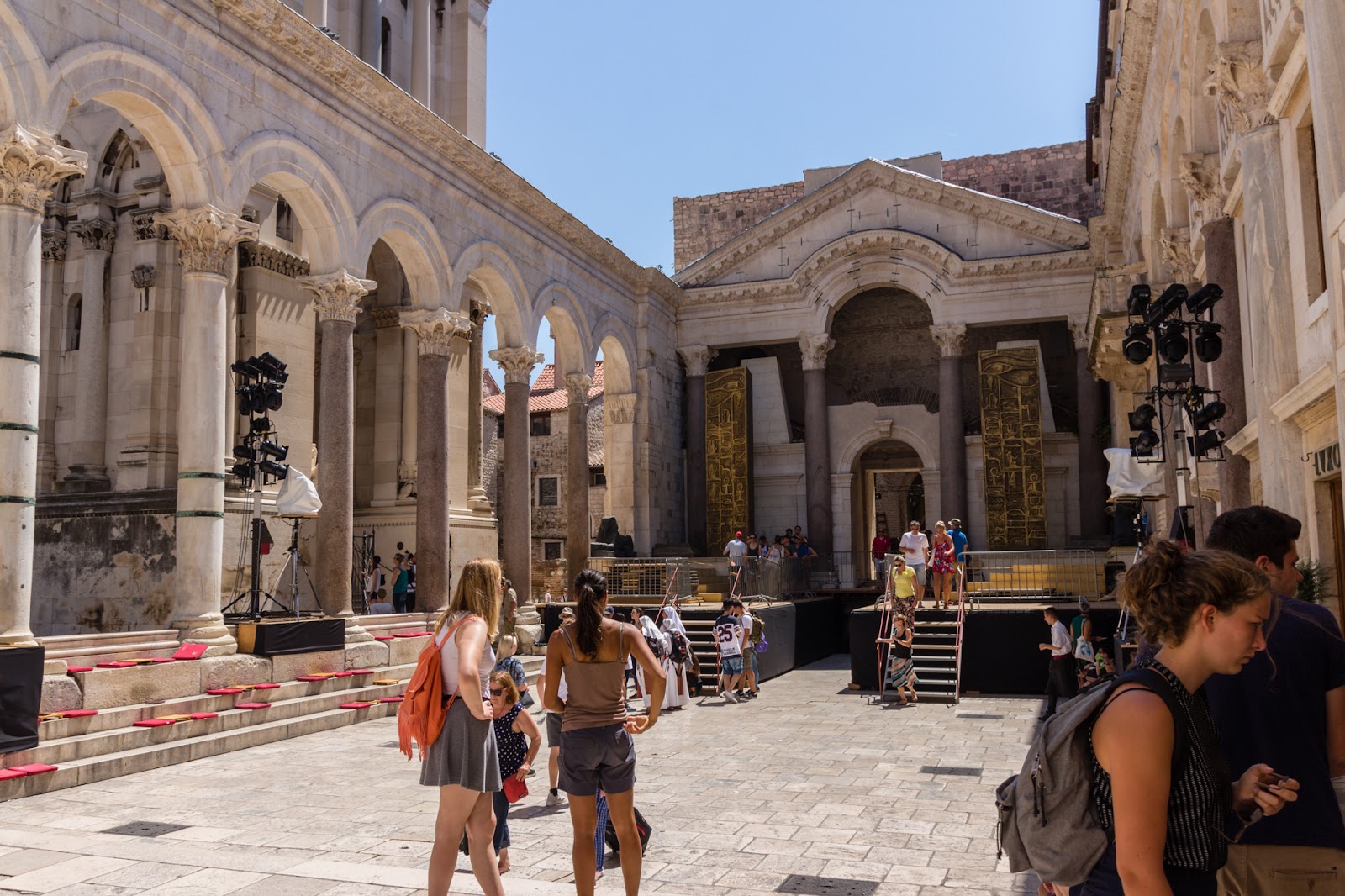 During the day we visited Split and we got a local guided tour with Barbara, who grew up there. She showed us around the beautiful Old Town and we got to learn more about the war and her family’s  experiences of it.

We also checked out the deep water soloing in Split. There are three main sectors and we went to the most popular – Sustipan. The first time we were there, it was a gorgeous day; climbing and swimming (or rather falling!) are a good combination in the hot weather. We had a lot of fun there!

We went back to Sustipan to enjoy our last day in Split with Zvoni and Barbara. Zvoni was determined to jump 10 meters into the water at the same climbing crag… it turns out it is also a famous jumping area for locals in Split.

The sea was very rough that day and Tanya even got into some difficulty in the waves. Fortunately, nothing happened. We celebrated Zvoni and Simon’s jump and all our survival achievements that day with some victory drinks at the nearby bar. 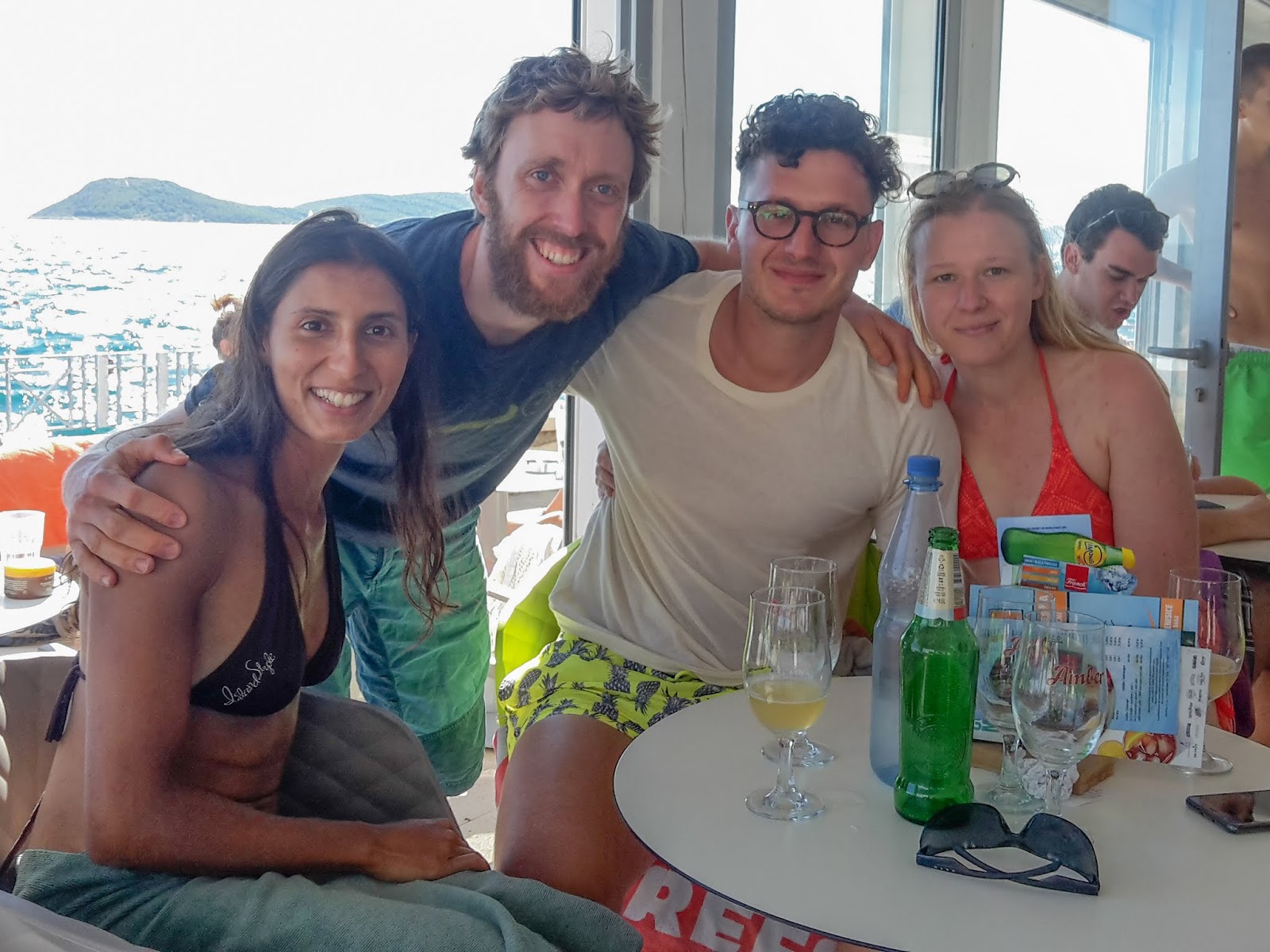 Barbara and Zvoni from the shelter in Split. Thanks guys for everything!

It was hard to leave as we really enjoyed spending time with them and felt so lucky that we met them (thanks Mrs. Hook!). It was truly amazing how welcome they made us feel and not only that but they made us feel like we contributed something meaningful. We felt really appreciated. This was truly humble of them, because they work tirelessly at the shelter to keep the dogs happy and healthy, all while still studying and managing their ‘normal’ lives. This also helps their mother, who opened he shelter and works incredibly hard to run it while running her vet practice. It is very impressive and we took a lot inspiration from them back on the road with us. 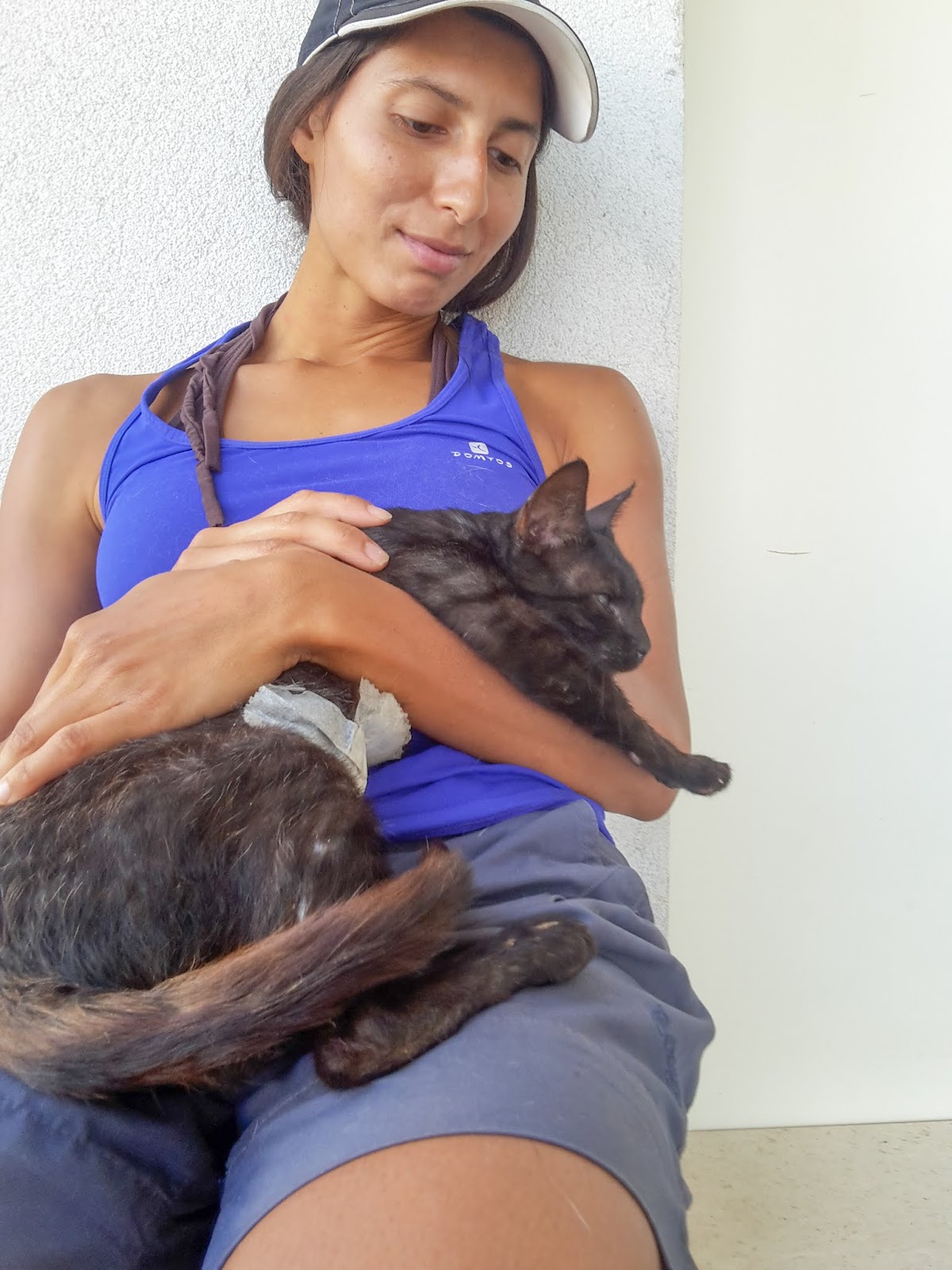 Mrs. Hook after the operation.

Before we left, we got see Mrs. Hook one last time. She had her spaying operation the previous day but she was still so cuddly and cute and we got to spend some quality time with her. During the operation, they found two very small babies and they were removed. Her body was exhausted and the babies wouldn’t have survived.

It is good to know that she is in good hands and being well taken care of. Barbara also told us the good news that they have found a home for her. We were over the moon and are very happy we made the decision to bring her to them.

Next we headed south to Dubrovnik and discovered a few gems along the way.