We have had a busy week. Between surviving traffic, climbing in Omiš and seeing many wildfires, we’re glad to be spending a relaxing day on a little tucked away beach with some good Croatian music to sooth the soul.

After the comfortable weekend in Zadar, we cycled out of the city in the evening and wild camped our way south. One of the things that struck us was the different perception you get when you drive the same stretch of road with a car and with a bike. All the rubbish – mainly plastic – on the side of the road was now very noticeable – stuck between bushes. 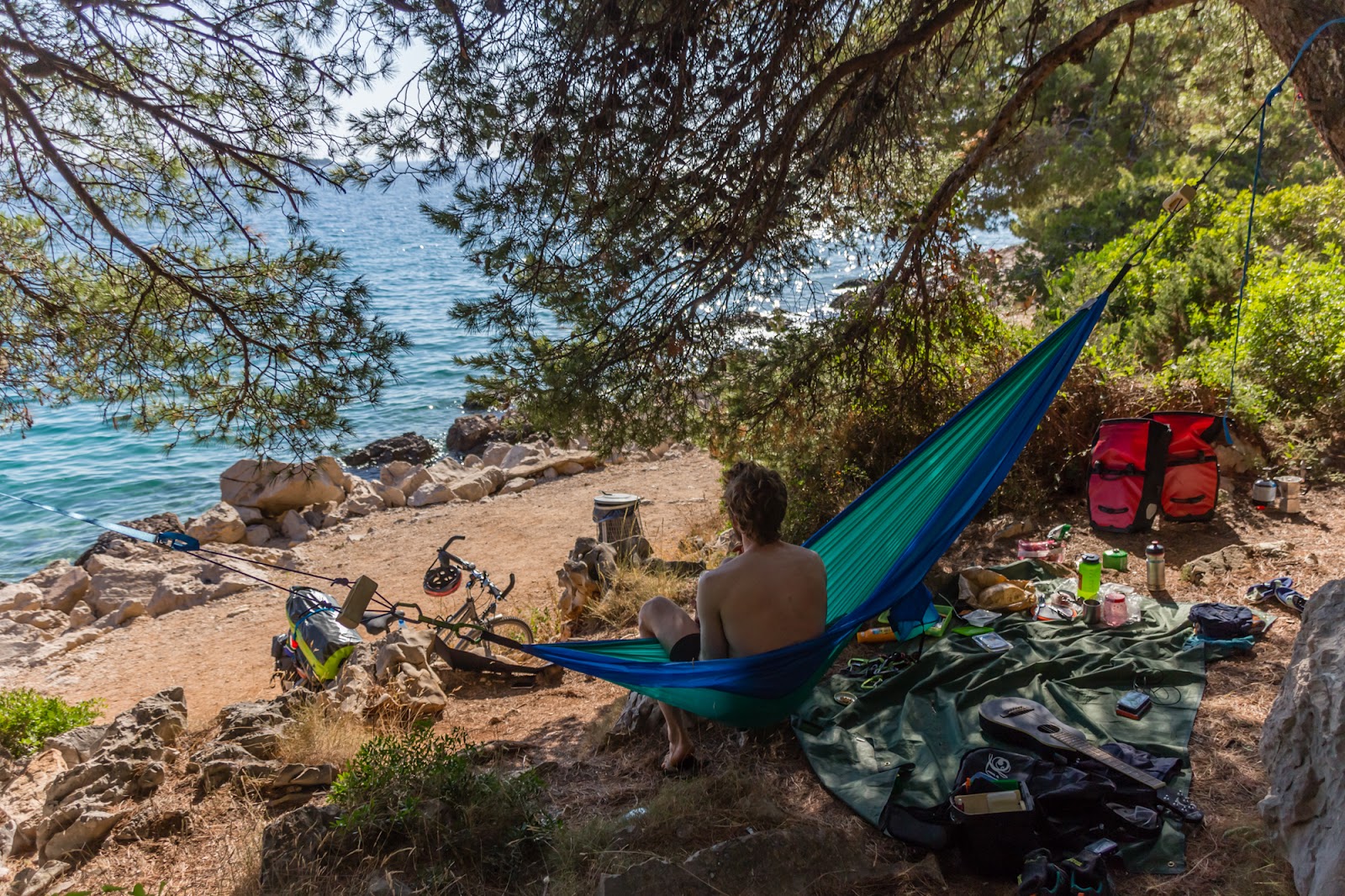 Testing the hammock the first time.

This was a common theme during our time in Croatia – as soon as you are a bit ‘off road’ there is lots of rubbish randomly thrown in forests or ‘natural’ areas. Not only plastic but also car parts, washing machines, prams and the downright gross… pretty much everything you can think of.

We cycled past some potential wild camping spots because of the rubbish and as day turned to night we cycled through Biograd, a small town along the coast with a buzzing street music scene. We had just cycled into a little piece of heaven with a great atmosphere on the promenade and street musicians every few meters. We had to stop when one duo started playing Hotel California, one of our favorites, but you could also find Elvis numbers and even some hippy, mellow instrument circles.

We found a wild camping spot in a forest just after the small city. The moon was full and dark red as it started to rise. After cooking we soon fell asleep and woke when the tent once again became a sauna as the sun rose. After packing up, Tanya walked away from the tent. She then had another one of her sneezes, which usually sounds like she’s possessed by the devil. A poor dog that must have been close by and half asleep woke up and started running at Tanya with the intent to kill whatever made that sound. Lucky for her, there was a fence between them. 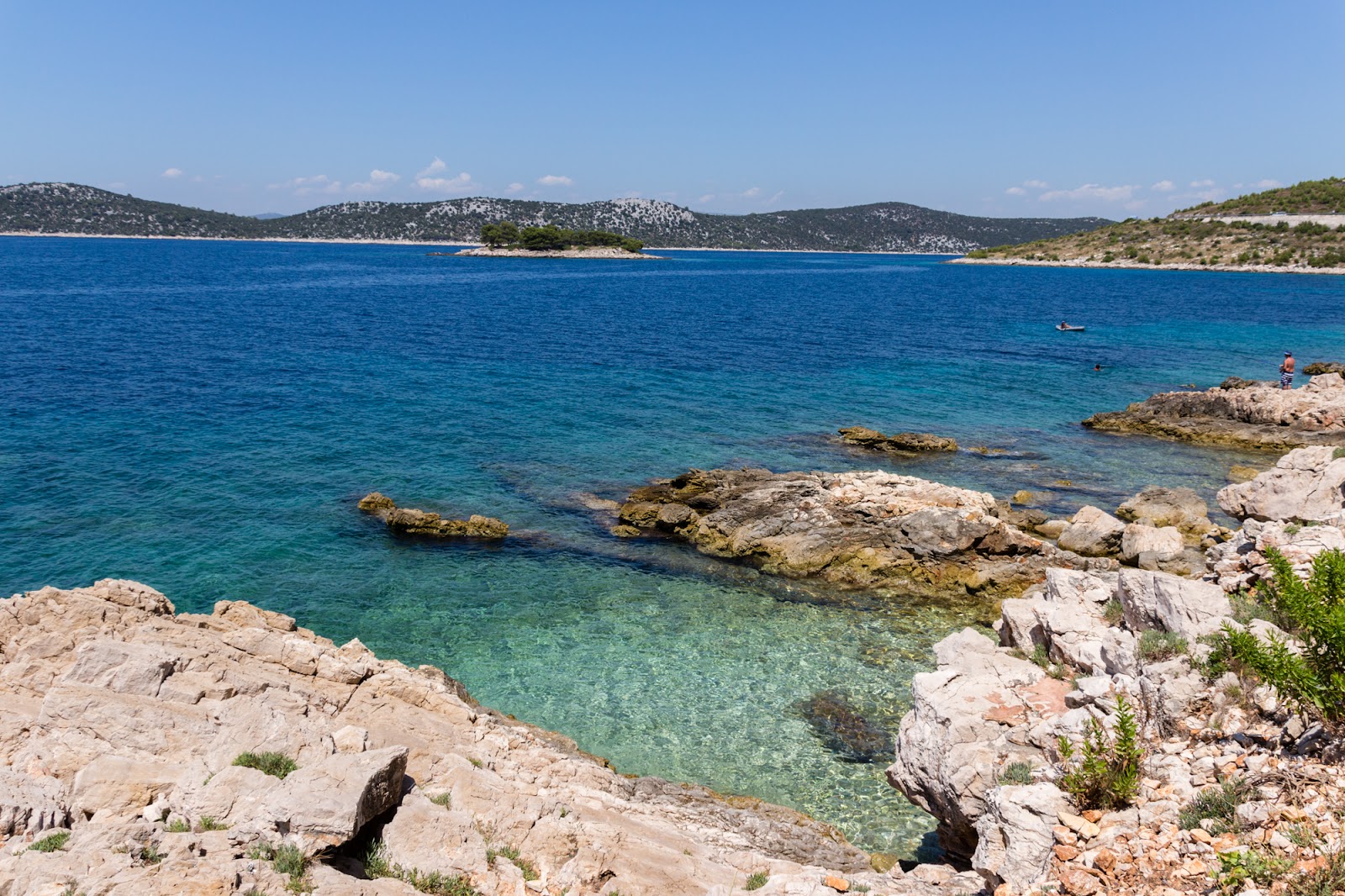 Unscathed, we cycled on and found the best beach so far in Croatia – Bilo. The water was crystal clear along this part of the coast and the beach had perfect access for bikes but not for cars – so not too many tourists were there. We had a good space to relax and Simon tested out our new luxury item – the hammock. We also met Hans there, an Austrian tourist whose son had done a bike trip from Austria to India with his girlfriend.

Reluctantly we left the beautiful beach and continued on. The next day we explored the Old Town of Trogir – which was absolutely gorgeous. Tiny, tiny small streets with very nice ice cream and cake shops. A group of four men came out to sing opera in the main square and the angelic sound carried through the city. 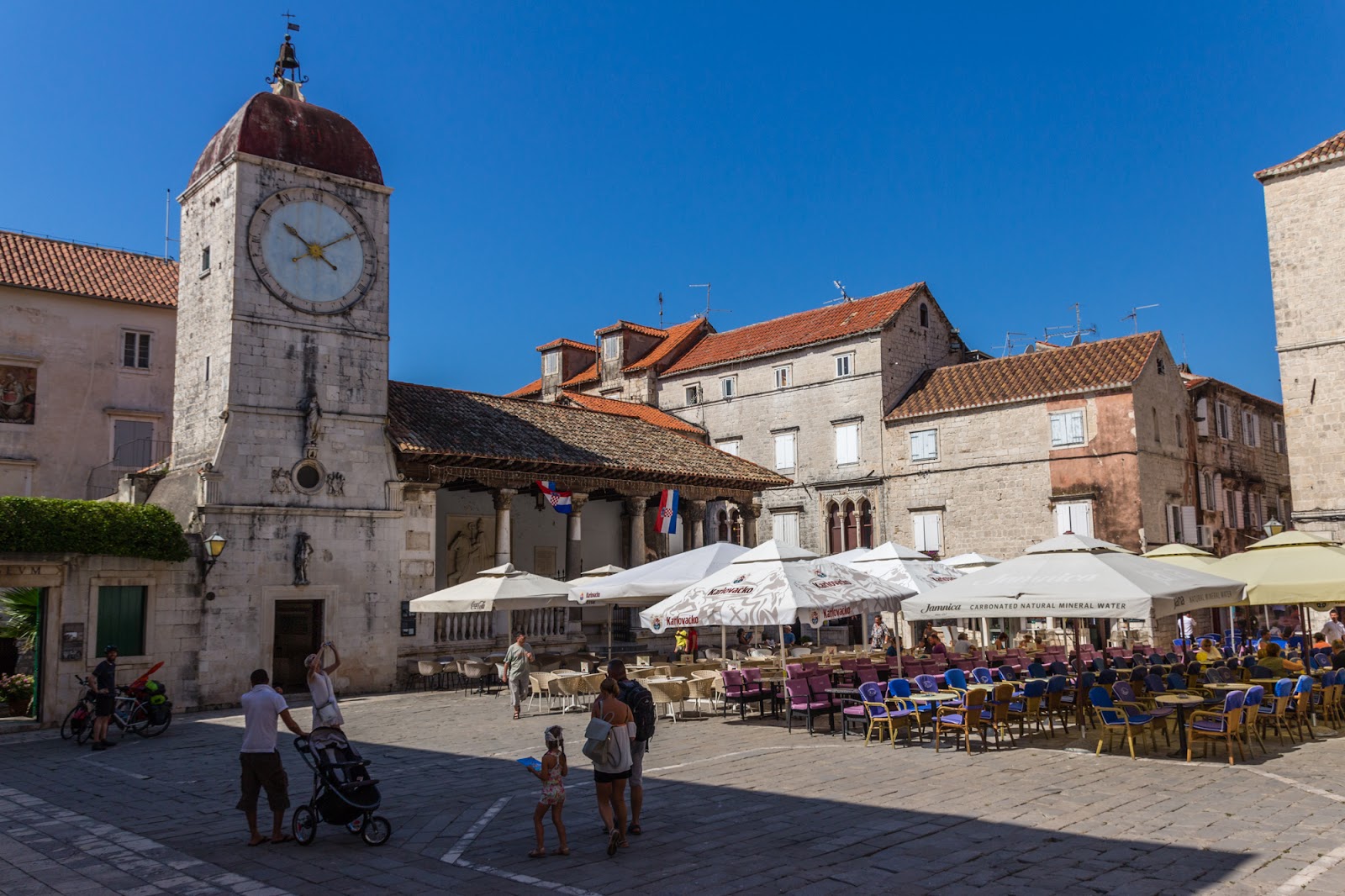 We then cycled on to find a nice beach just before Split but were not impressed with the quality of the water and the amount of people on this stretch of coastline. We decided to stay anyway as it was already midday; our options were running out. We had placed our solar panel in the sun to charge about 7 meters from us and we, of course, were in the shade hiding from the scorching sun.

The only decent shade we could find was in the parking lot. After about four hours on the beach a man returned to his car, which was already parked there when we came, drove out and stopped between us and the solar panel. In this time, he must have picked up the solar panel, our battery pack and two rechargeable batteries with their charger and drove off before we knew what was happening. To say the least, we were very angry but the feeling of not being able to do anything was even worse. 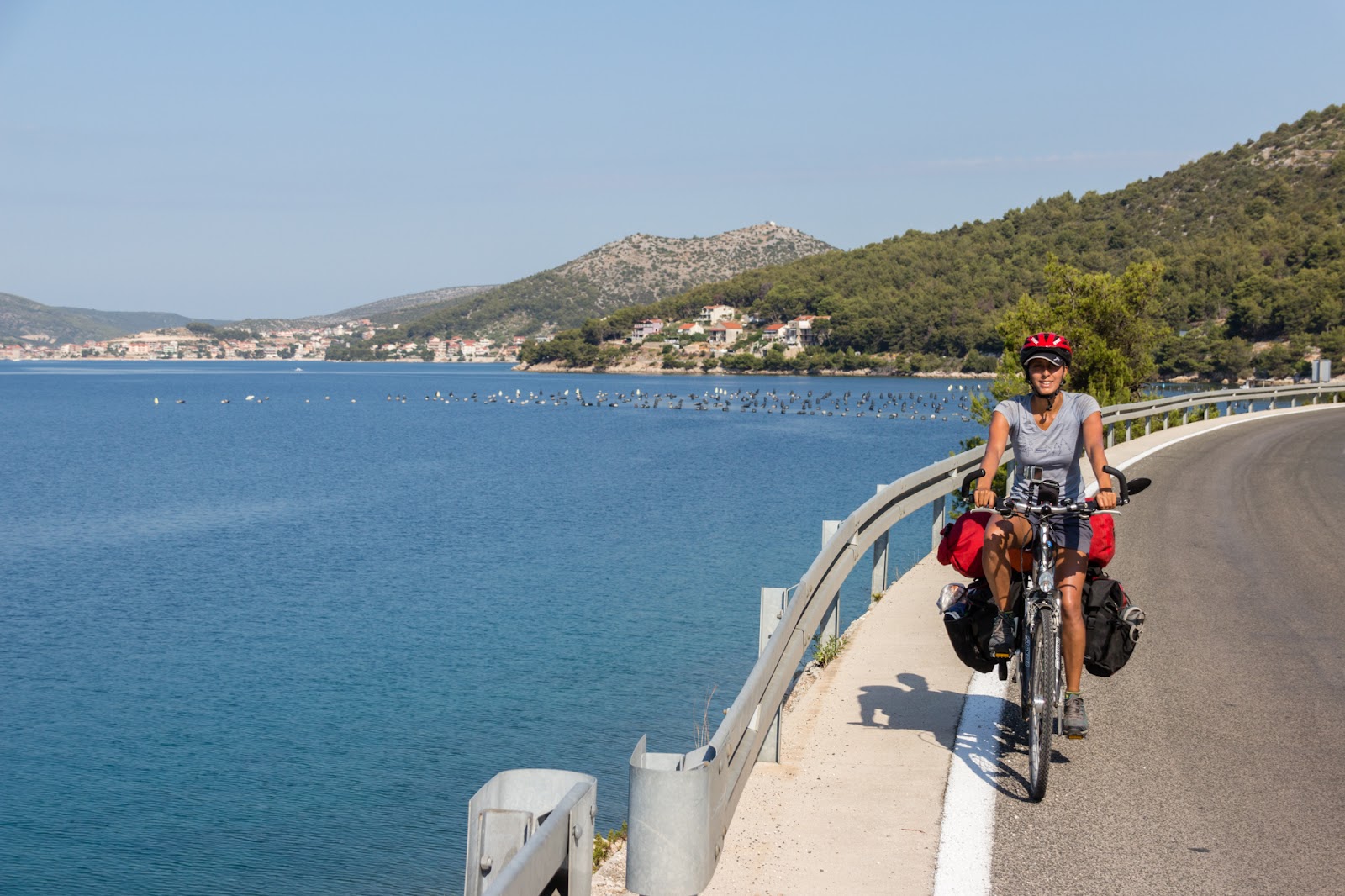 Cycling along the coast.

We decided to move on and cycle past Split as accommodation was very expensive that weekend because of the Ultra Festival. We thought the day couldn’t get any worse but our decision to stay on the D8 road proved us wrong. We found ourselves on what felt like a very fast highway, with no hard shoulder and a constant stream of fast cars, trucks and buses. Bicycles should clearly NOT be on this road! We ended up in a middle lane with traffic both left and right of us, shooting past as if we were not there.

Eventually we got to the right side of the road but with no hard shoulder, all we could do was lean our bicycles onto the barrier and hope none of the cars hit us as they passed. At this point, we were both genuinely scared for our lives and had no clue what to do next. We were stuck there for a while and eventually, we had to decide either to take the busy exit into Split or cross three lanes to stay on the D8 and get passed it. The first option seemed riskier so we waited for a break and pedalled like we have never pedalled before. After successfully crossing in one piece, we thought the worst was over but for the next 3 km we both had very close calls with trucks and buses and were very happy when the road got quieter again. 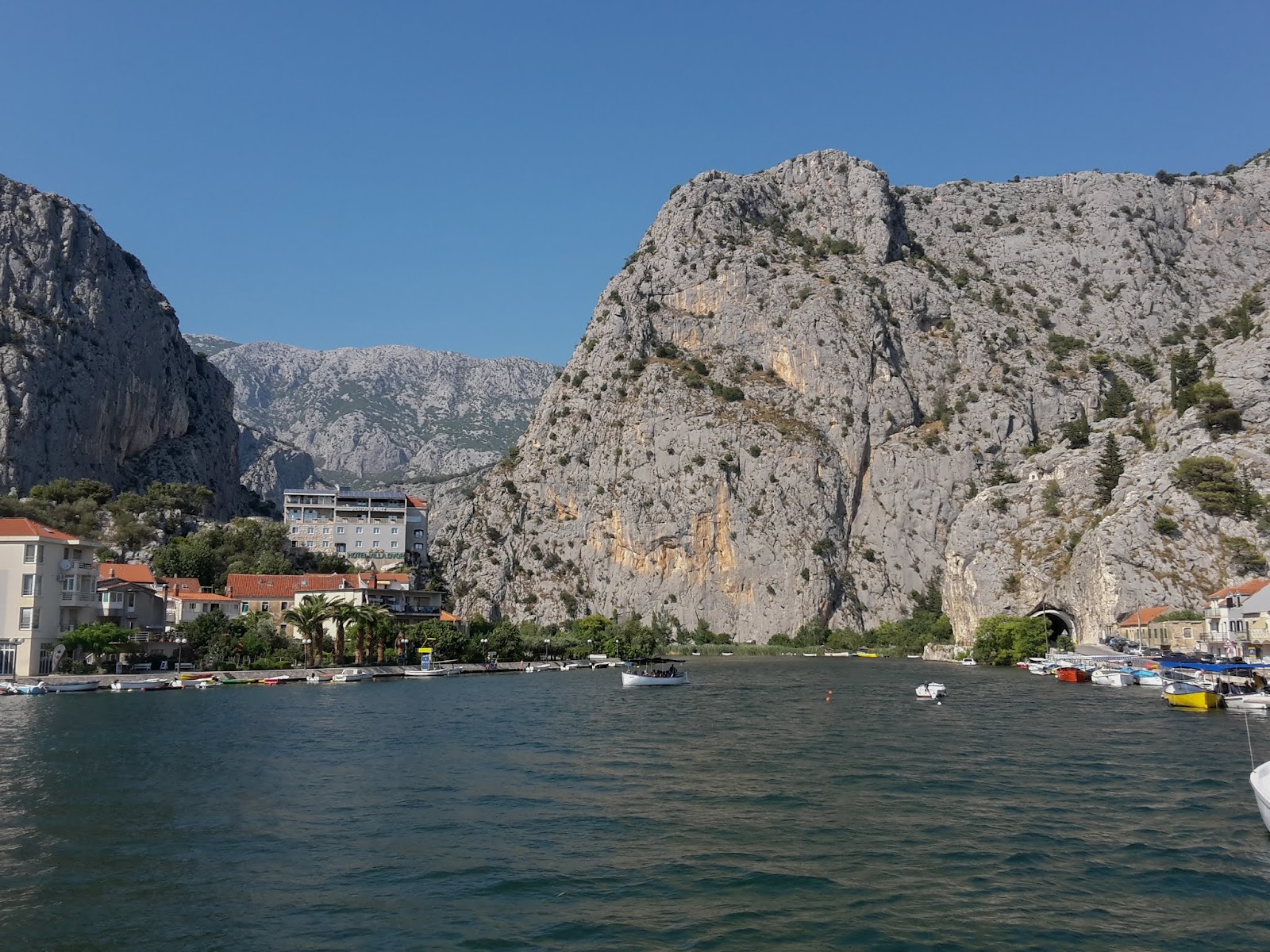 On the way to the climbing crags

We continued on to Omiš. After being spoilt with the climbing in Paklenica, Omiš had high standards to live up to. When we arrived, though, we realised this was a destination for more than just climbing. That can be a good thing but in this case the small town had lots of traffic going through it and many, many tourists on the streets. 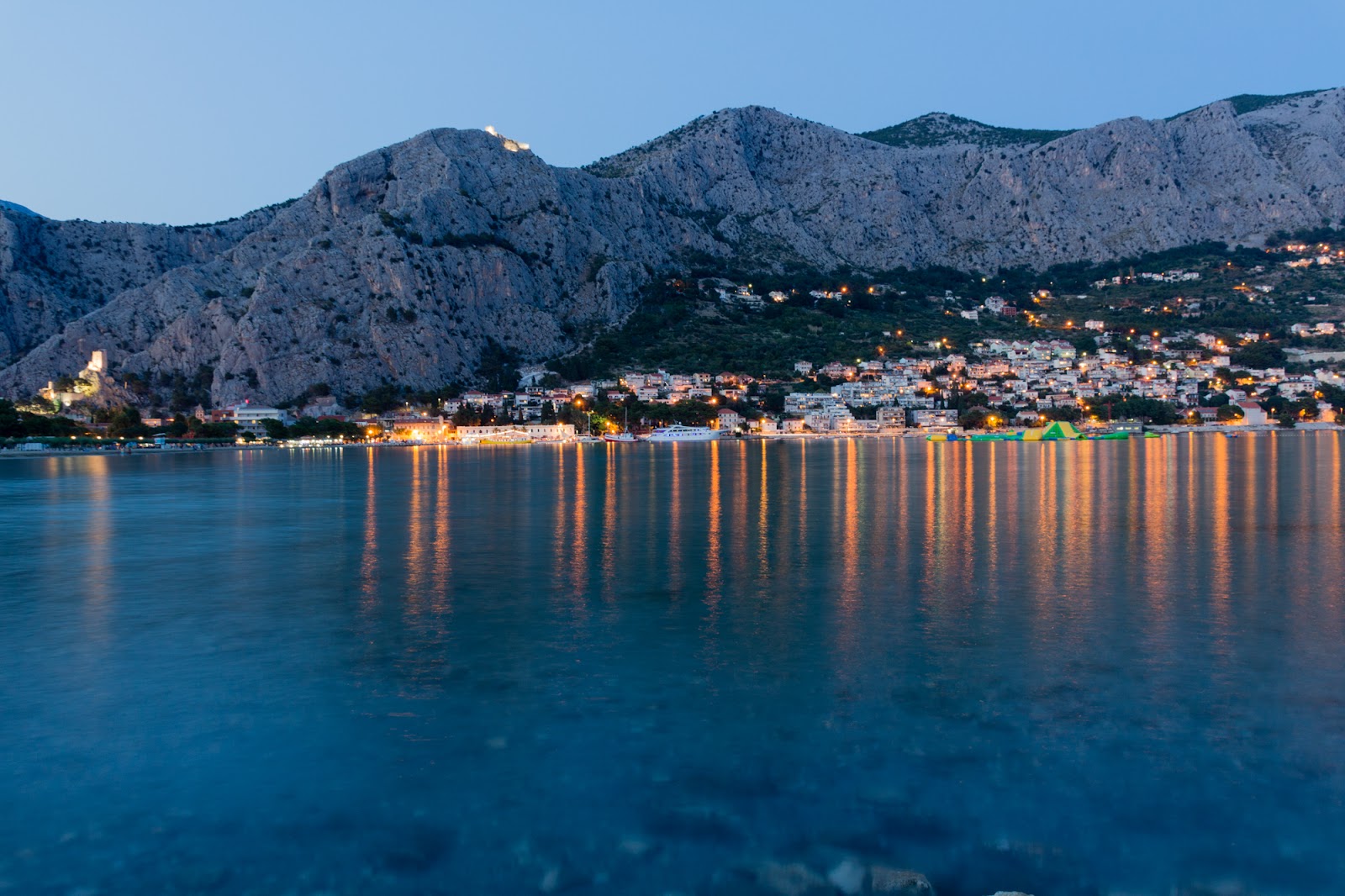 The high peaks and cliffs around give a very nice ambience to the town, especially when walking along the beach and looking at the town lights at the bottom of the cliffs after sunset. For us, though, the ambience of the surrounding cliff faces and nature was disturbed by the loud city noises and traffic.

Nevertheless, the climbing crags were very accessible by bike. We only had to cycle five minutes from the campsite and the crags were directly next to the street. In Paklenica, we had to cycle up 100 meters in elevation over 3 kilometers distance every morning, so we appreciated the practicality of it. The climbing itself was most of the day on the shade, which is key during the summer time. Especially the sector ‘Visoke Pole’ with overhanging tufa routes was our favorite! We both could climb lots of beautiful routes on our limit. 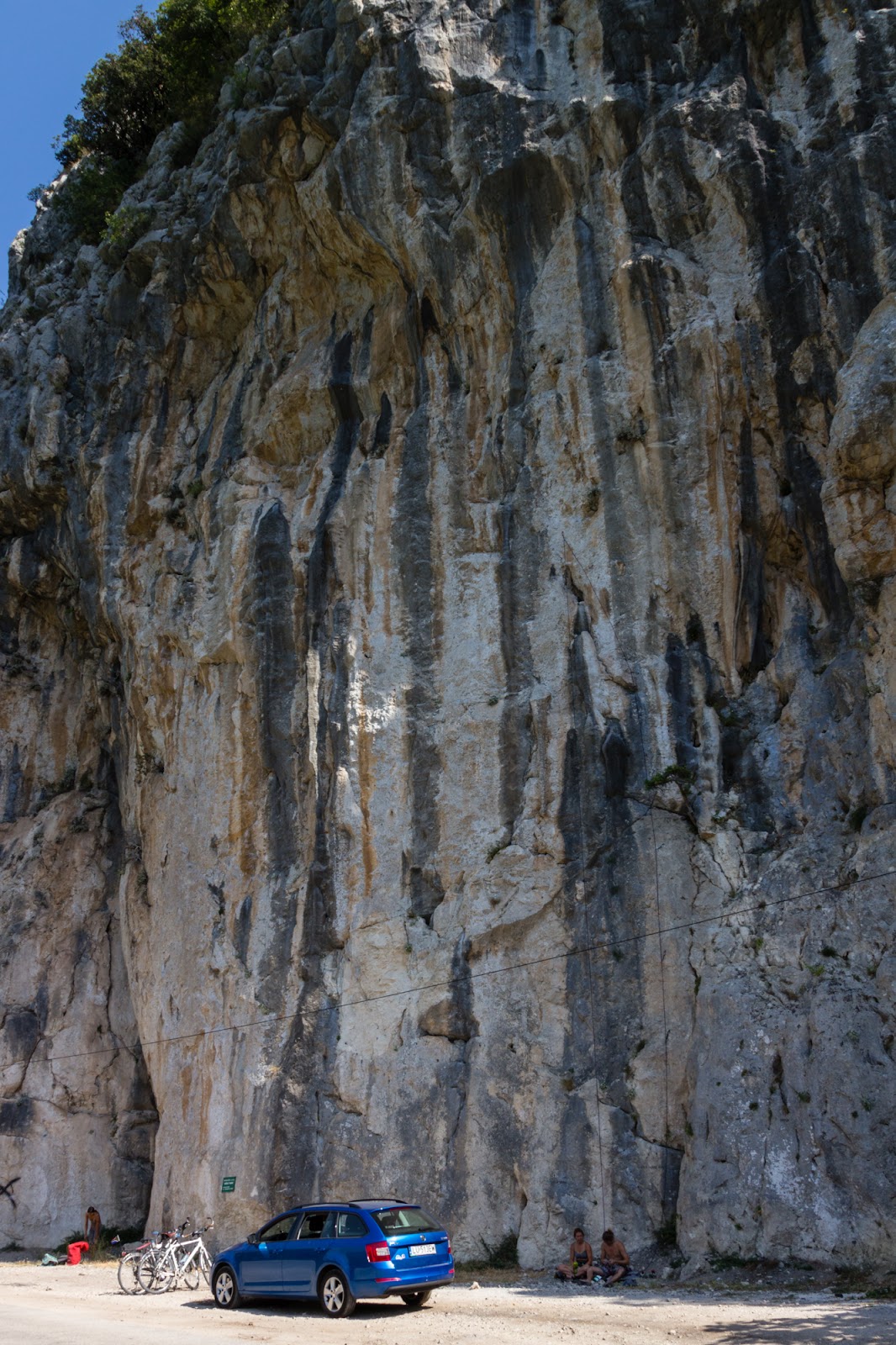 When we arrived in Omiš on the Friday evening, the wind became very strong. Overnight it got worse and over the next few days the wind speeds reached up to 70 km/h. We woke in the morning to find our tent completely covered in sand – not just our panniers but our inner tent, along with our sleeping bags! We thought we might get a sandstorm in the Sahara – but here in Europe?

Apparently these high winds, called Bora, are common in the Croatian winter. In the summer they can be dangerous though, as we saw on our third day in Omiš. While climbing, we saw large clouds of smoke rising up from behind the cliffs to the north. Later, we found out that there were many wildfires in Split just 20 km north of us. They had spread even faster from the high winds and firefighters were struggling to keep them under control.

After a few days the winds died down and we saw firefighting planes flying over our campsite every few minutes. At the beach we watched a few of them maneuvering over the cliffs. They sharply turned direction while dropping down to the sea, with the bottom of the planes gulping up water before taking off again. The fires were eventually put out but not before a lot of damage was done. 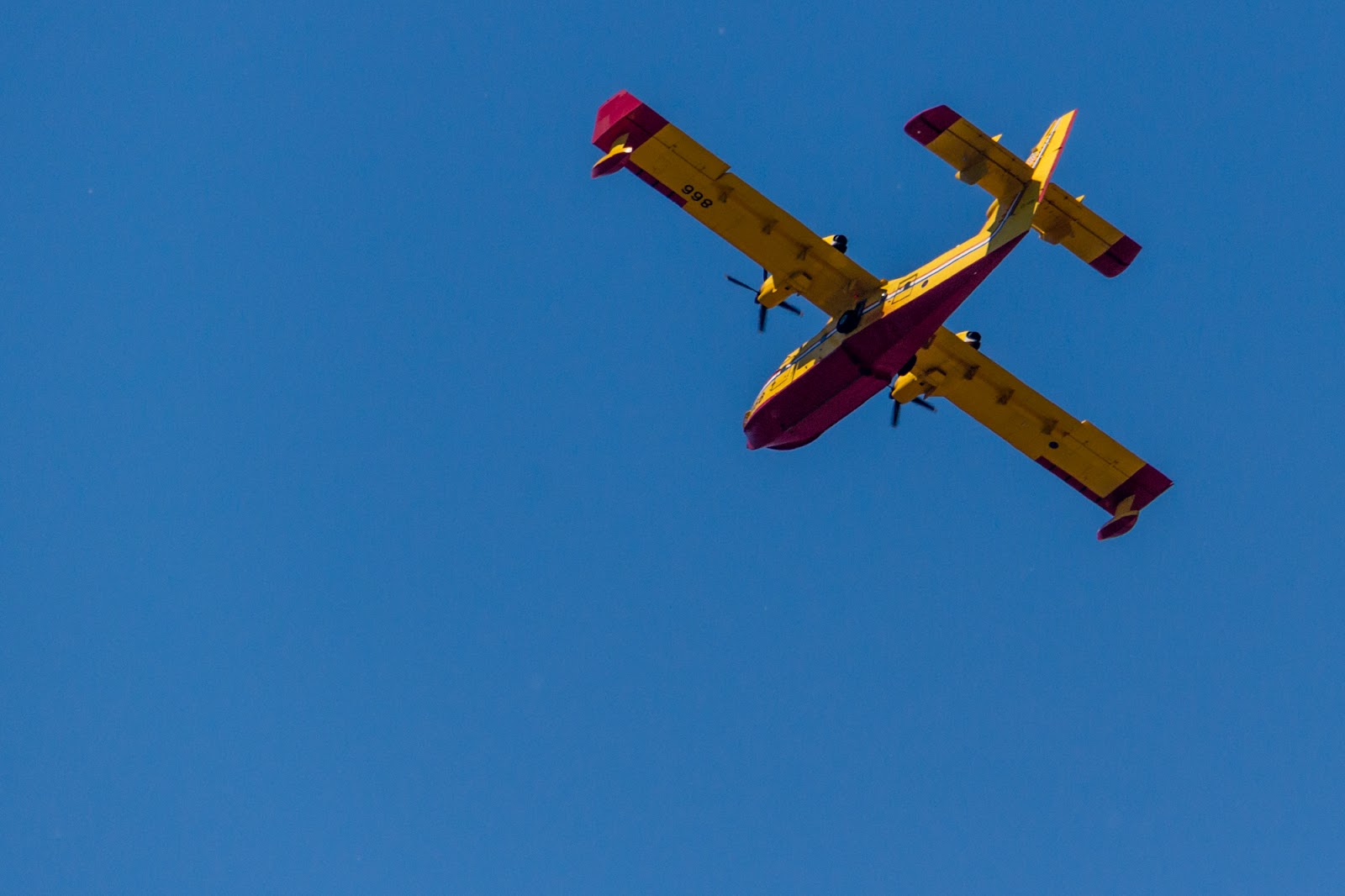 Firefighting planes over our heads

Wildfires have since been a common theme while we have been in Croatia. We have seen small fires hundreds of meters from our ‘doorstep’, blackened remains of forests and even Hvar Island on fire across the sea.

The influential time for us in Omiš was not over, as we still had a little furry friend to make. She would also change our direction to back up North for a little while… Where some more furry friends were waiting for us. More in the next post… 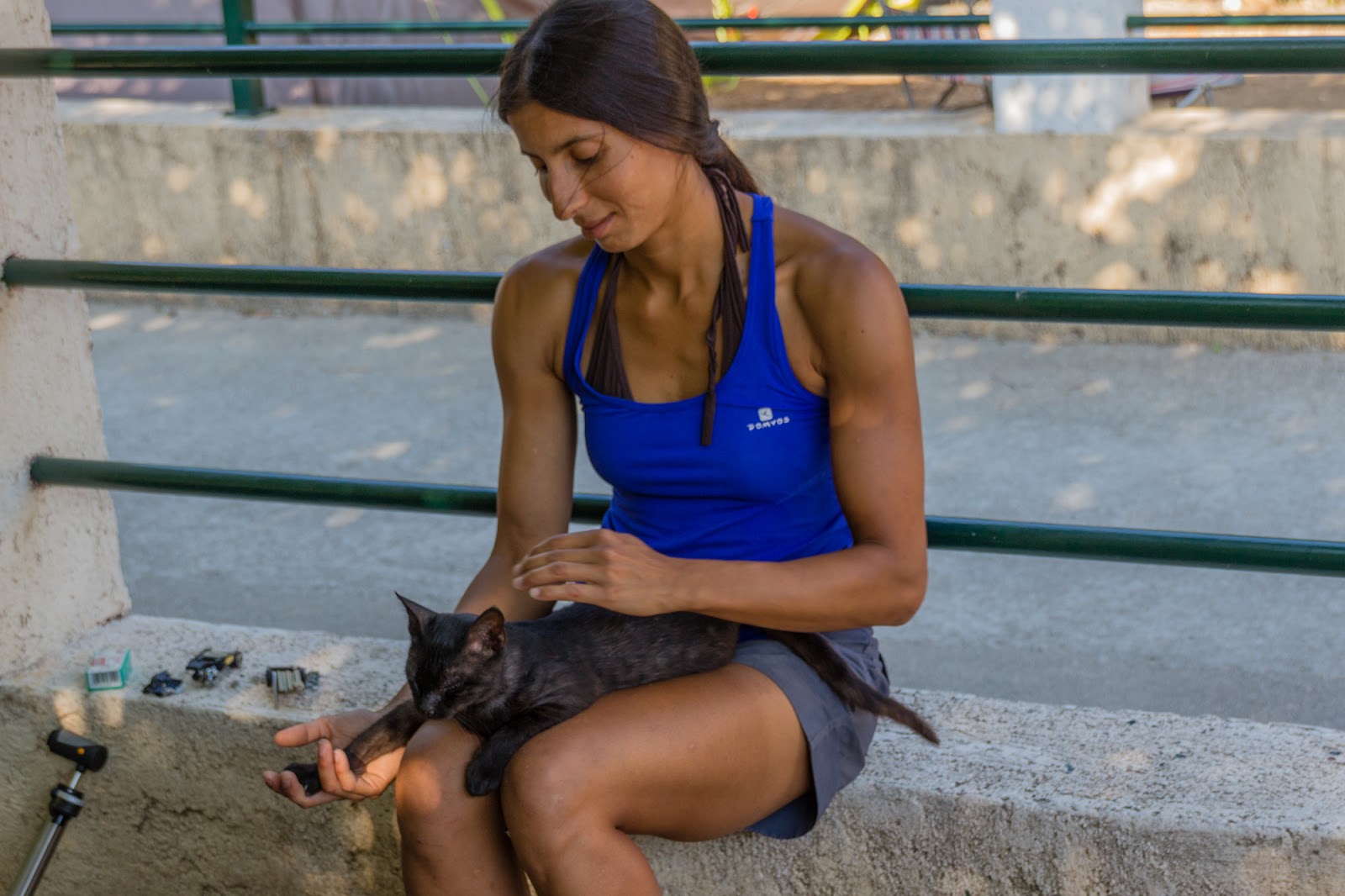