Paklenica National Park. One word – wow! We had mixed feelings about going to Paklenica as people had very different views about the climbing there. We had 8 days to spend there as Tanya’s parents were meeting us in Zadar. In the end, 8 days were just enough but we could have easily spent another week there.

Paklenica National Park is very large with an impressive canyon. You enter through the walls of the canyon where you can find many routes to your hearts desire. We were both VERY impressed with the quality of climbing. The routes are very interesting and the rock is not polished like we were expecting. 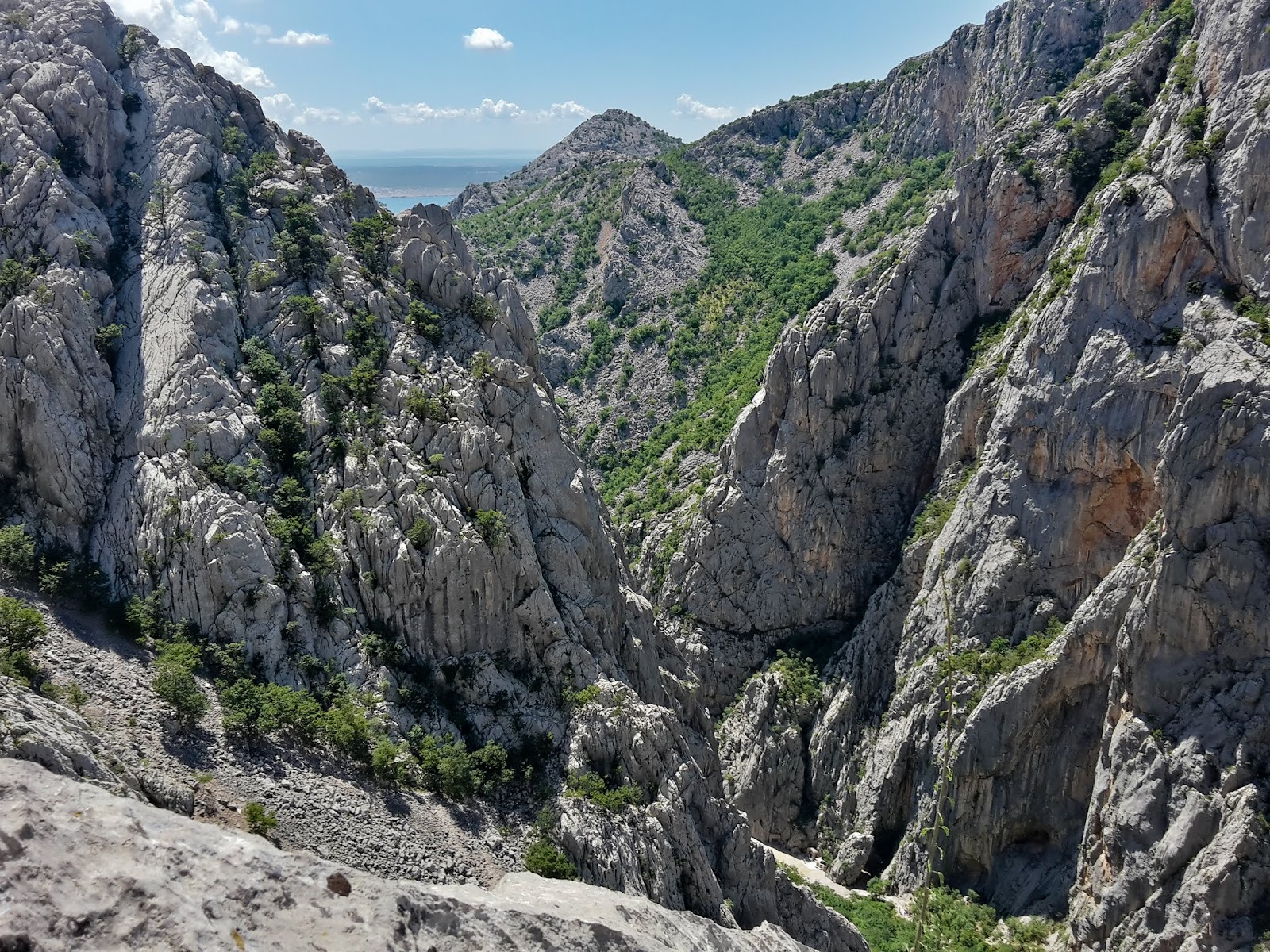 It is also known for its multipitch routes. The famous wall of Anića Kuk towers over the river as you walk into, up and past the canyon walls. The impressive face is 300 meters in length with the summit 700 meters above sea level. We did two multipitches while there – Šaleški and Mosoraški. On the day of the 10 pitch Mosoraški, we started biking from the campsite (at sea level) up to 100 m, hiked 250 m up to the start of the multipitch and climbed 350 m up to the summit. Although we were glad for some clouds and shade on the day, the wind was very strong on the last few pitches and for the first time in a while we wished we had taken jackets up. The climb was still really enjoyable and the views rewarded us for the hard days work. 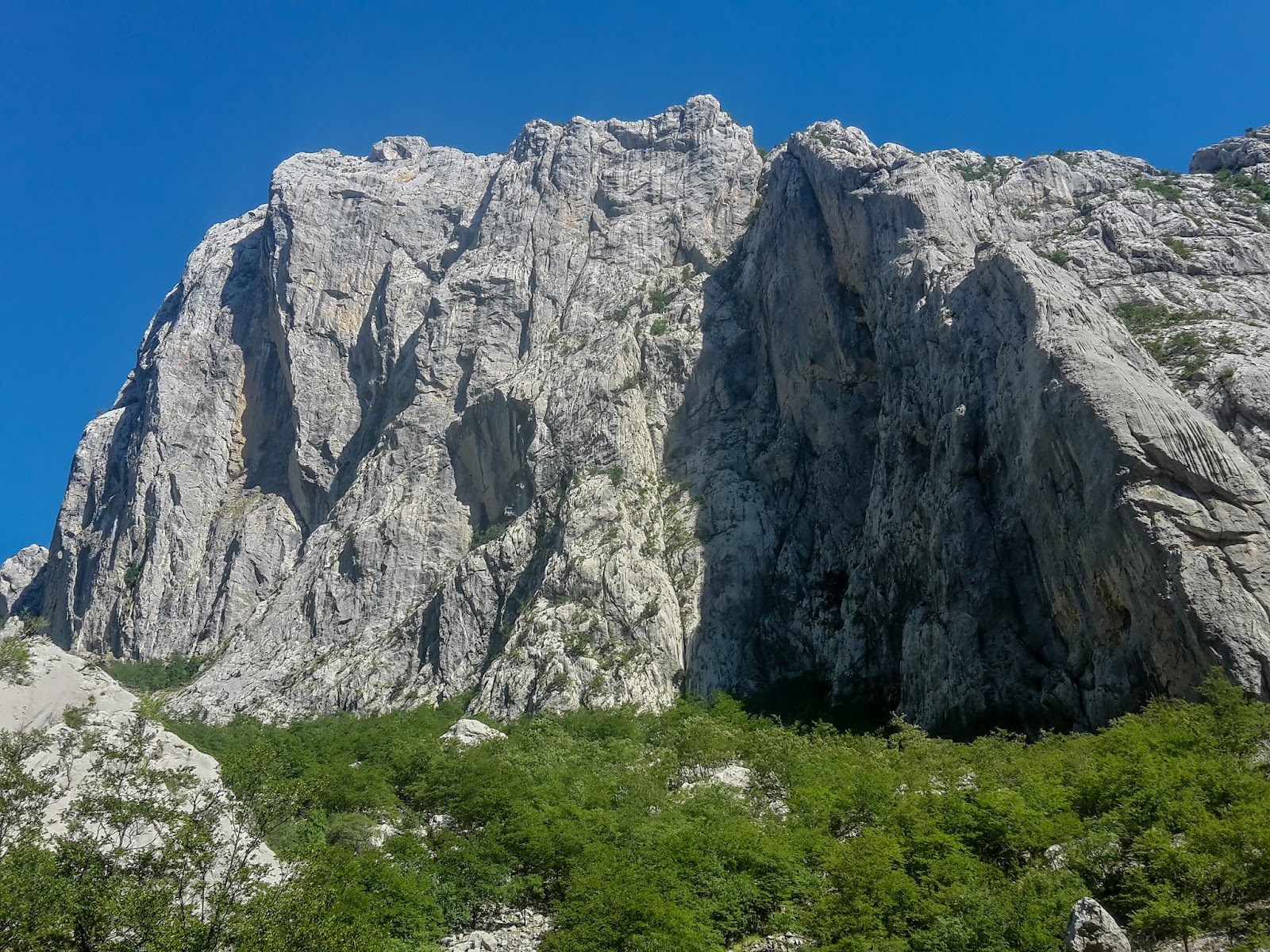 We also met an Australian couple – Ash and Dani. They were one month into their trip and are tavelling Europe for three years, also enjoying the climbing on offer in Europe. It was nice to meet some other travellers on the road. 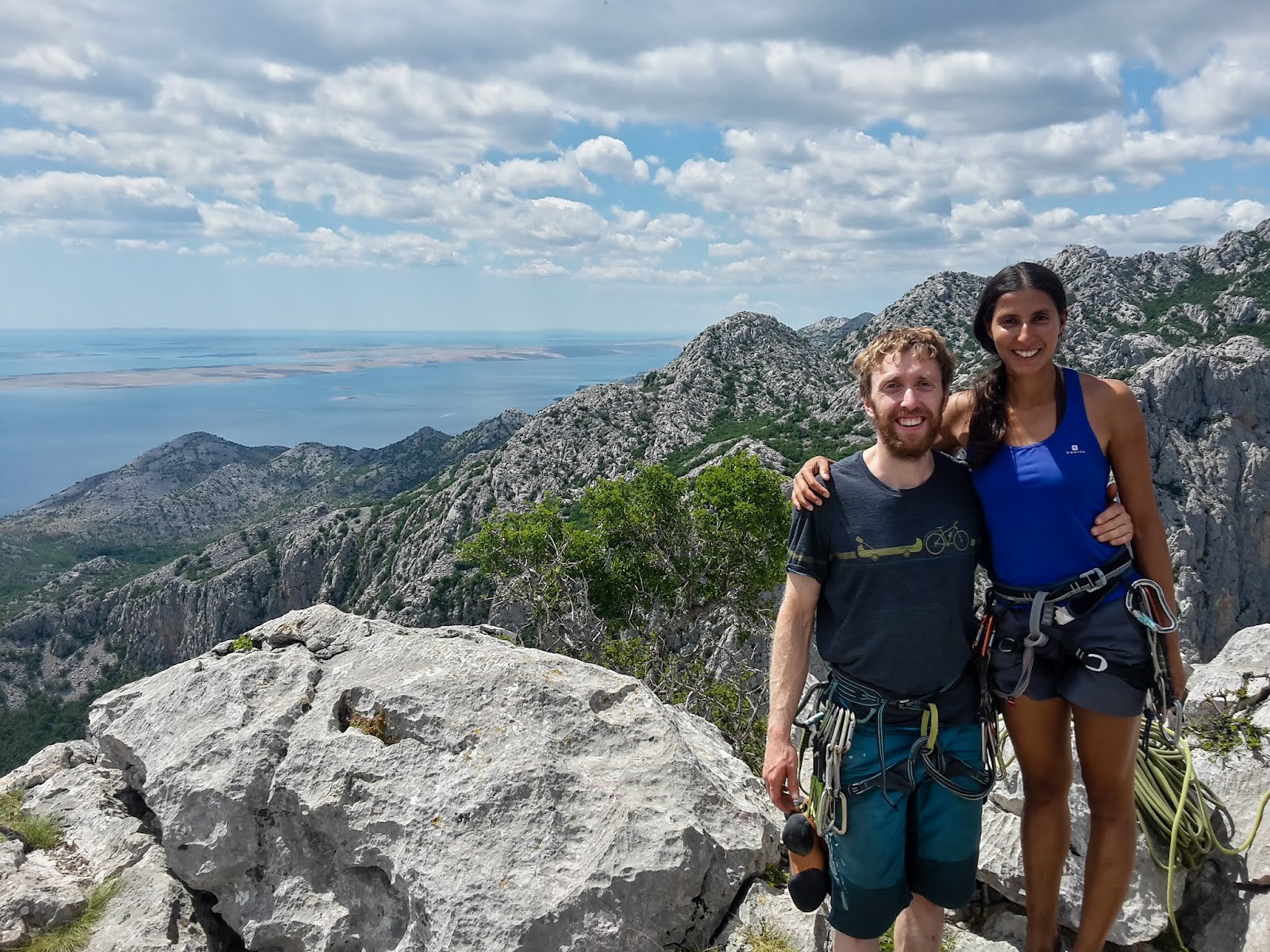 After our time in Paklenica, it was time to move on. Tanya’s parents, Dawn and Eddie, came to visit us for a weekend in Zadar. They brought down some orders from Mom’s spice cupboard and wayyyy too much food. Apparently they thought we might need it – parents will be parents :). To add to the pile of food, we cooked some chili con ‘soya’ before they arrived.

They also very generously brought down a travel guitar that Tanya ordered. A compact, second hand, Lindo Traveller Series guitar. Carrying a guitar on a cycle trip may not be the most practical idea we’ve had – but at least it is small and light enough (1.2 kg) to not cause too many problems. 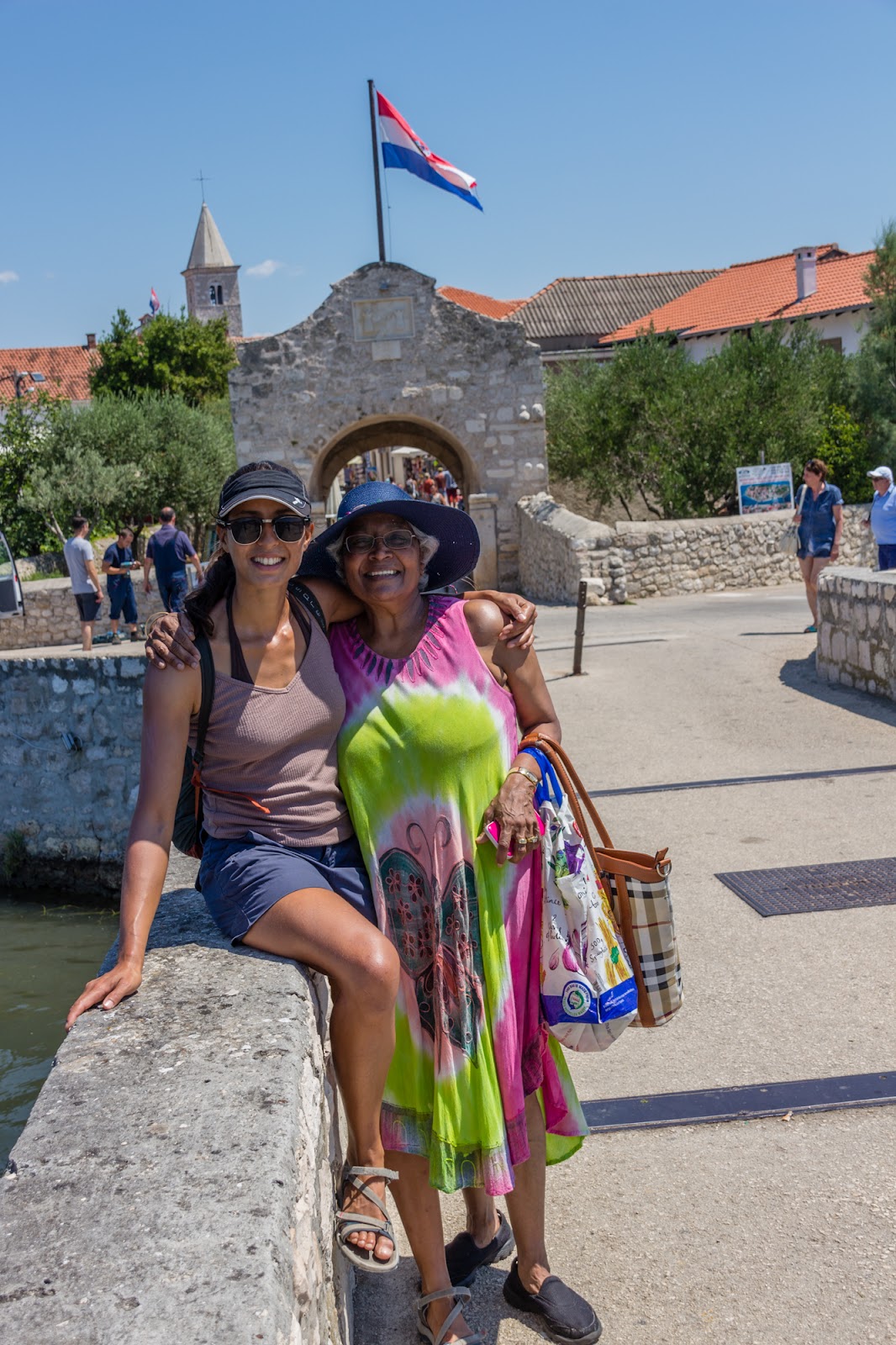 Tanya and her mom, Dawn, in Nin.

On Saturday morning we headed to a small town close to Zadar called Nin. The town is surrounded by sea but connected to the mainland by a bridge. We went to the sandy beach and had a dip in the sea before heading back to Zadar for the afternoon. The town is old and very pretty. There were a lot of tourists there and it’s easy to understand why. The small streets lined with cobble stones with its views of the sea all around are a good combination.

For Dawn’s birthday, which was the previous week, we went for coffee and cake to an outdoor restaurant and bar lounge called ‘The Garden’. It was a very impressive place with a beautiful view of the harbour. They also played really good music and the atmosphere was completely relaxing. The restaurant served all raw vegan food and the carrot cake that Tanya ordered was insanely delicious. Definitely recommended if you are in Zadar! 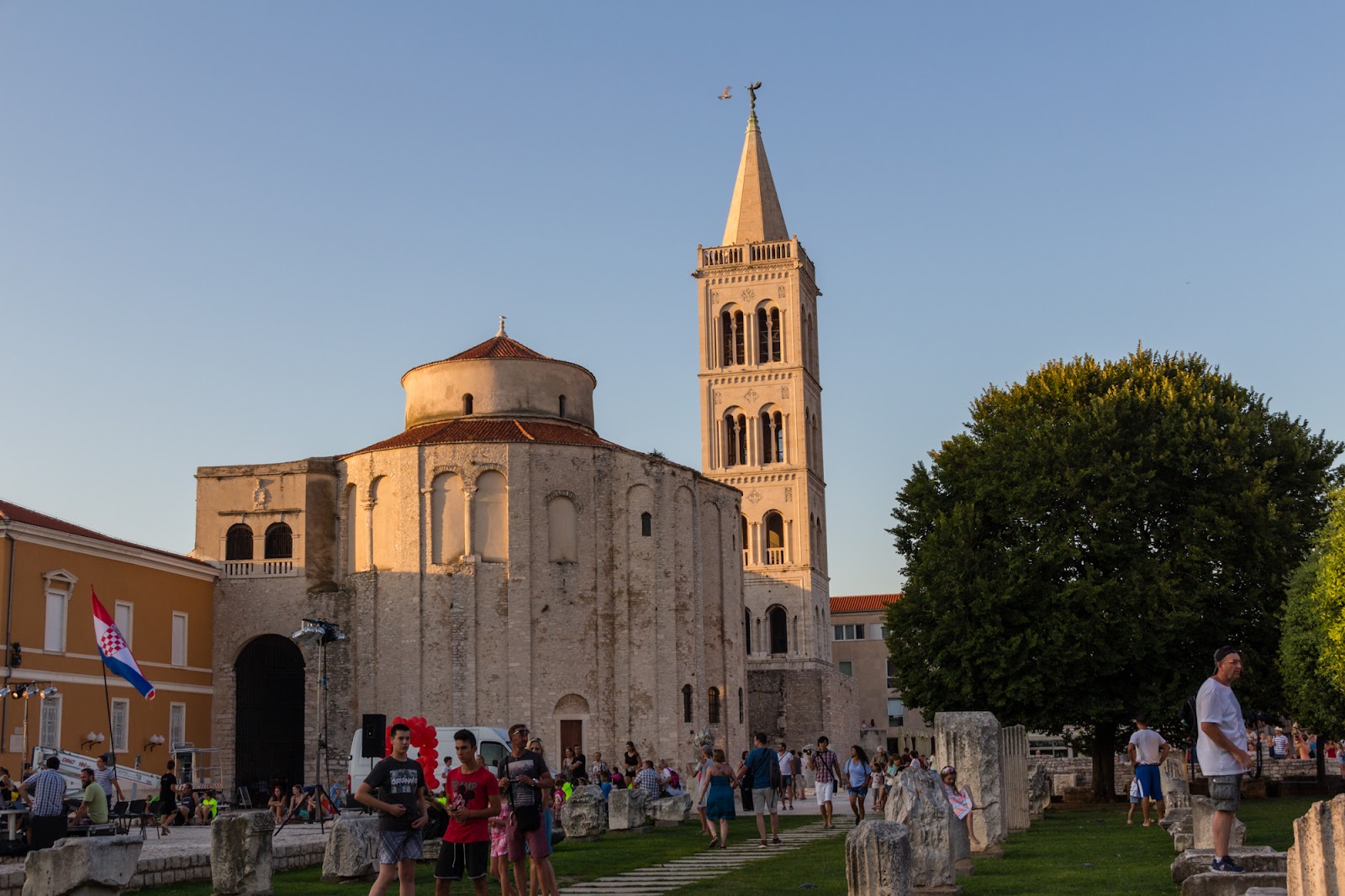 We explored the town some more and after browsing around a few markets in the town we found a spot on a pier to enjoy the sunset. Simon’s mother reminded us that, according to Hitchcock, Zadar has the most beautiful sunset in the world. High expectations but sure enough, it really was one of the most beautiful sunsets we have ever seen. A bright orange sun going down behind some dark red clouds over the sea. Even though a lot of people were watching the sunset, everything was still and quiet and each person enjoyed the serenity. 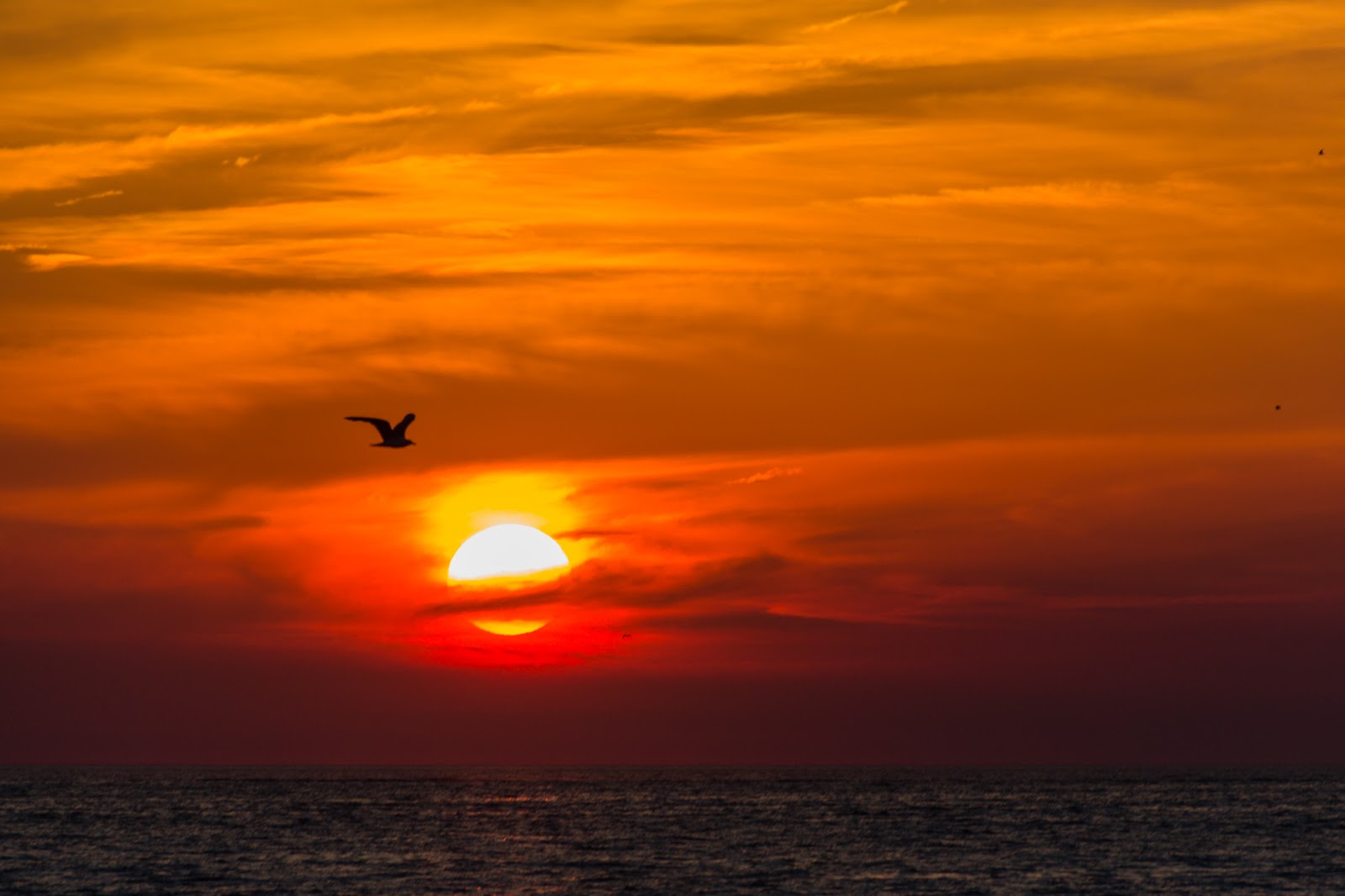 On Sunday, we drove down the coastal road to Šibenik, first stopping in a small but very picturesque village called Vodice. It also has a lot of traditional Konobas – restaurants selling traditional Croatian food which is sometimes run by families. We then headed to Šibenik. This was especially interesting for Eddie as he used to work in Šibenik in the 70s. A lot of memories came back, although a lot of the city had changed since he was last here. The old town was of course still the same – and it was surprisingly very interesting and beautiful. 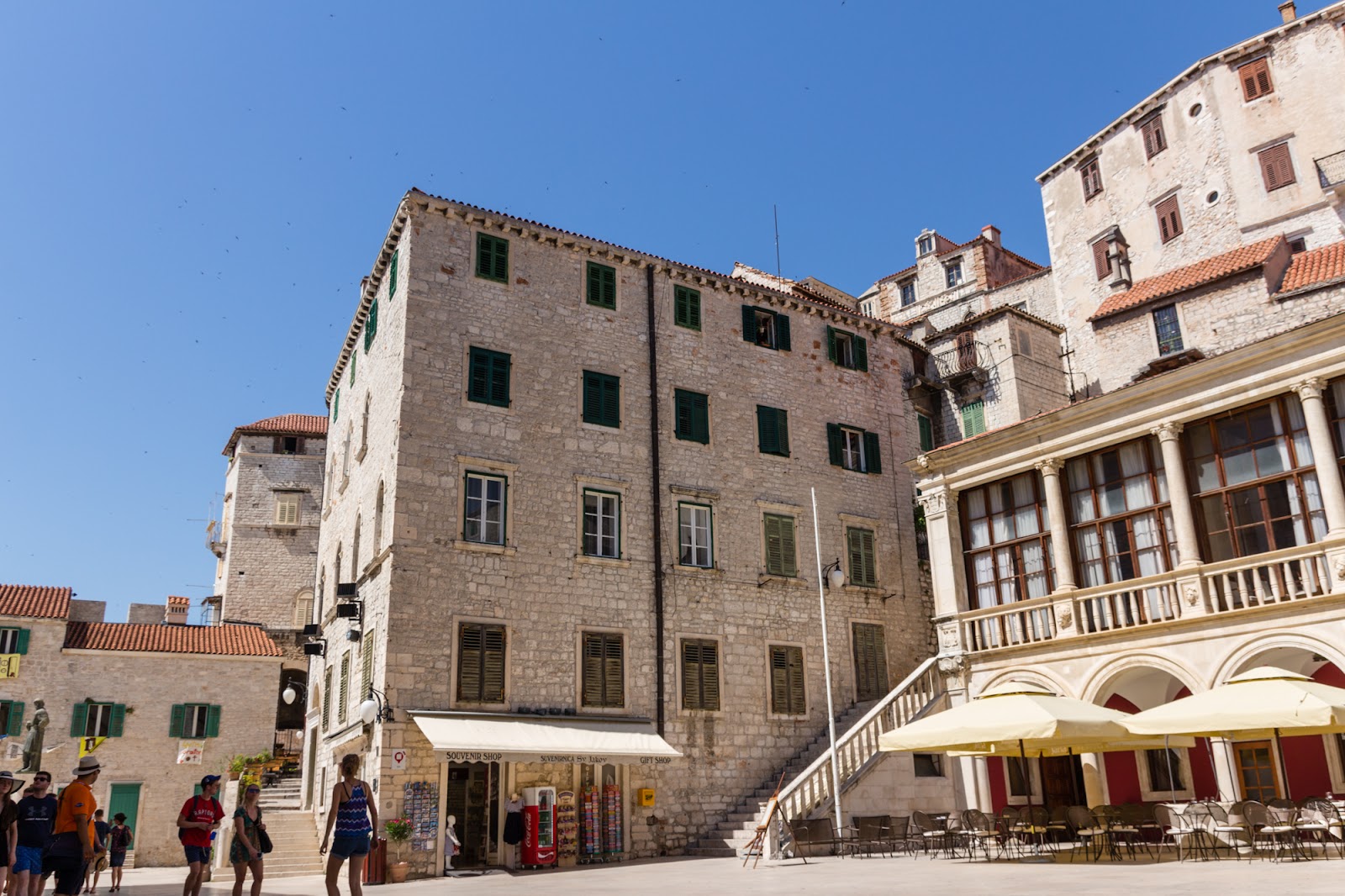 Šibenik is not the usual tourist town on the coast, so compared to some other cities it was a lot quieter. The Old Town is built on a steep hill and it looks very striking when you see it from the bay. Walking up a few steps we reached the main square where there were more buildings towering over us. Above them, hundreds of swallows were diving through the air and their sounds echoed through the town. The buildings were very tall and close together. It was very easy to get lost and that is exactly what we did – strolled around and got lost in the maze of buildings. There were cute cafes and shops tucked away at different corners; this city definitely has it’s own unique charm. 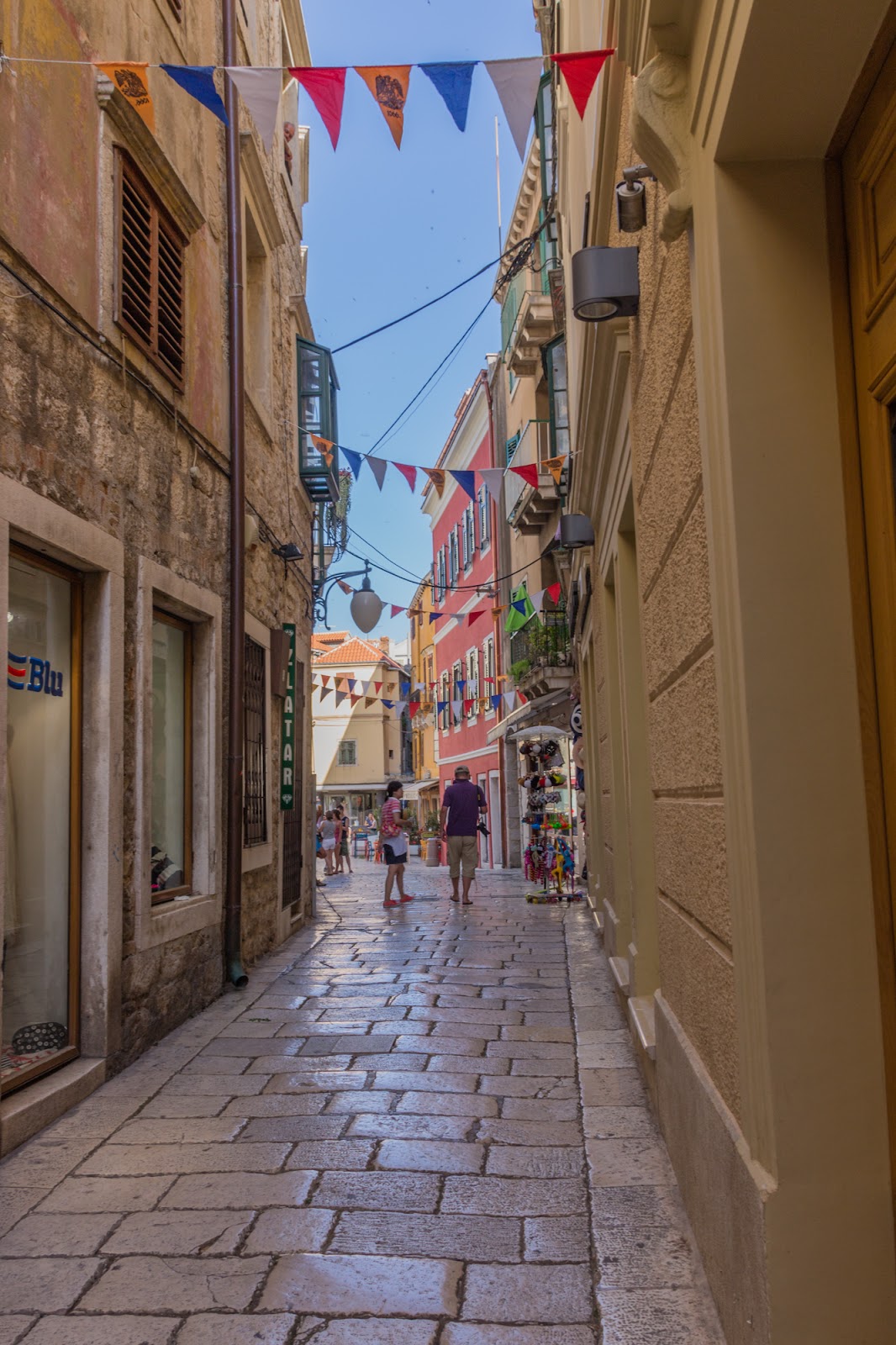 We met a waiter there called Ivan who was very nice!! He told us a lot about the history of the city and about his country and what it’s like to live there. He gave us a very interesting insight into Croatia and Šibenik. 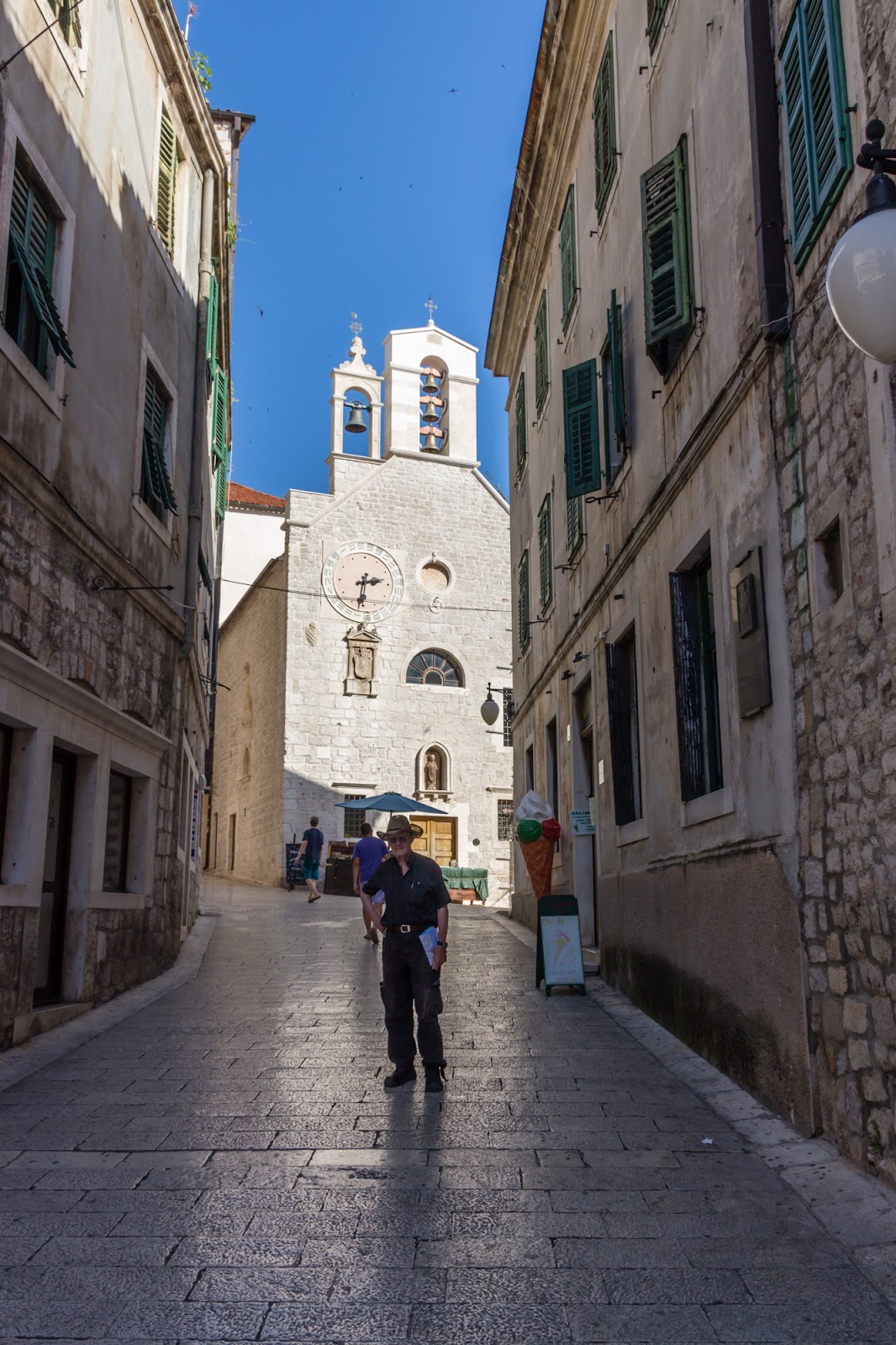 Eddie, Tanya’s dad, in Sibenik where he used to work.

The following day it was time for Tanya’s parents to return to the UK. Over the next few days, we cycled on to Omis where we met an adorable, cuddly cat that needed our help along with a few more furry friends. More to come in the next blog post…