Croatia. Where to begin. Extreme heat, beautiful beaches, always surrounded by water, magnificent lightning storms and incredible climbing. So far, it’s lived up to its expectations.

As I’m writing this, we’re relaxing by a gorgeous pool overlooking the Adriatic sea. After the intense lightning storm we got stuck in yesterday – we don’t feel guilty. The relaxing day we have in this beautiful weather couldn’t be more contrasted with our experience yesterday evening.

But let’s start at the beginning. Plans… ah  plans… We spent almost 1.5 years planning this trip but so far, in Croatia, we’ve hardly stuck to any of it. After we crossed the border we headed towards a small town called Buzet. Simon’s wheel had already started making some strange noises and we eventually realised that his metal rim of the wheel was slightly bent. We’re still not exactly sure how this happened – probably too much weight on it. Soon, the entire wheel was wobbling but we decided to continue slowly on to Buzet. It was only 20 km away. Should be no problem, right? About half a kilometer from Buzet the entire rim gave way and the wheel was no longer functional. 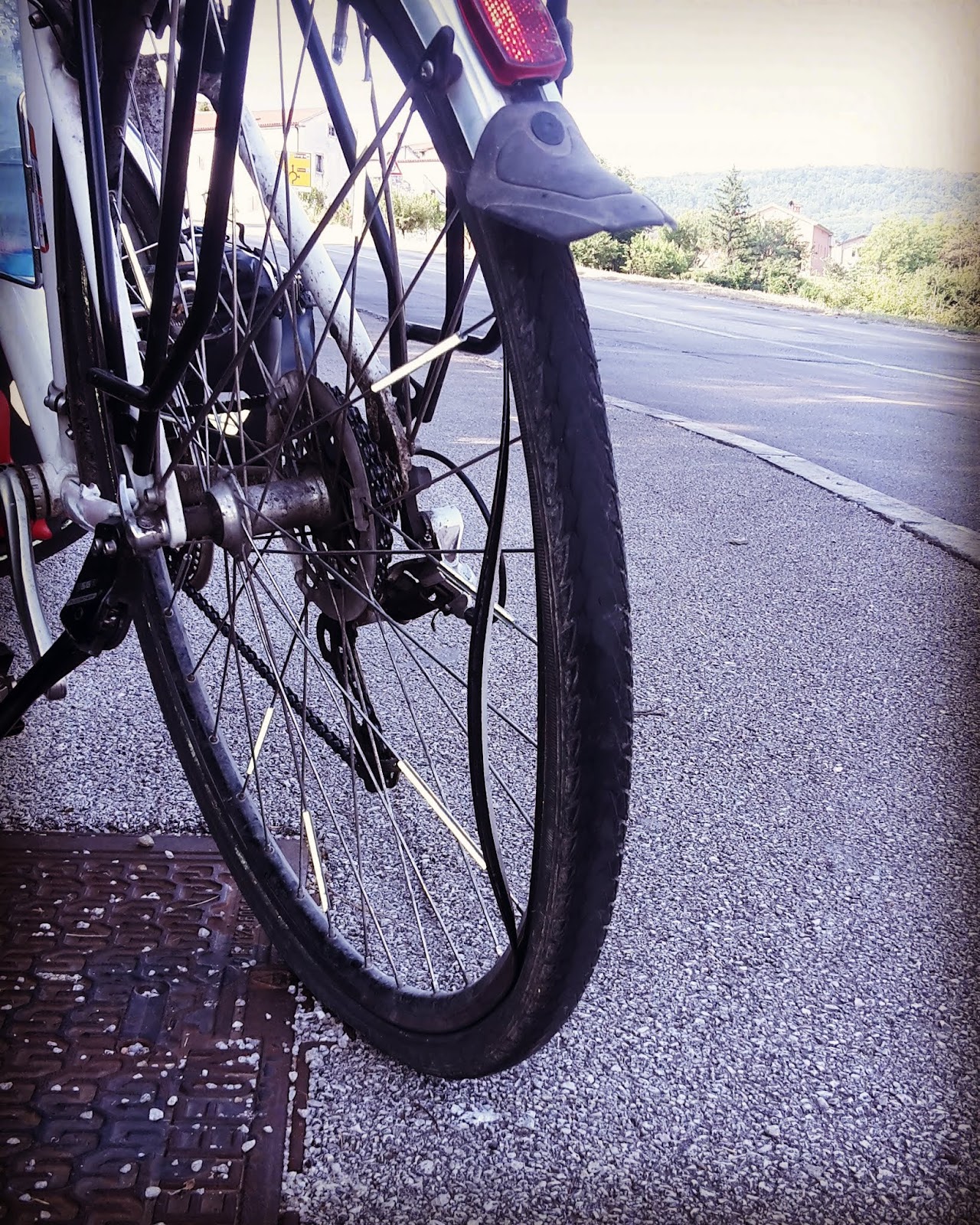 The broken rim of Simon’s back wheel

You never appreciate the practicality and genius behind the invention of the wheel until you have to carry two fully loaded bikes just 500 m up a hill. We packed all the gear on Tanya’s bike and Simon’s bike was simultaneously pushed while lifting the back wheel. It took us over an hour to get to the bus station! Luckily we could transport both bikes and all the gear to Rijeka using the local coach service. At least the poor bus driver took pity on us and gave us a good deal.

So… plans change. In Osp we decided that we would first cycle on the islands.  Since we now found ourselves in Rijeka, we cycled the D8 until we got to the bridge connecting the mainland with Krk island. We left early the next morning and to our surprise the road coming out of Rijeka was very quiet. As soon as we got to the bridge connecting Krk, though, the traffic was non-stop. We don’t know if we’ve ever seen that much traffic in our lives. Later we found out why it was so busy – it was a public holiday in Croatia. All the tourists were heading for their holiday fun on this island. Still not sure why it was so busy here – the other islands were far prettier in our opinion.

We stopped for a break and a South African lady and her Croatian partner spotted us and came to chat. They were very sweet and she gave us some good old South African Zam-Buk with “From Croatia, with love” written on it. Such a sweet gift and it has been perfect to use on our skin after climbing! 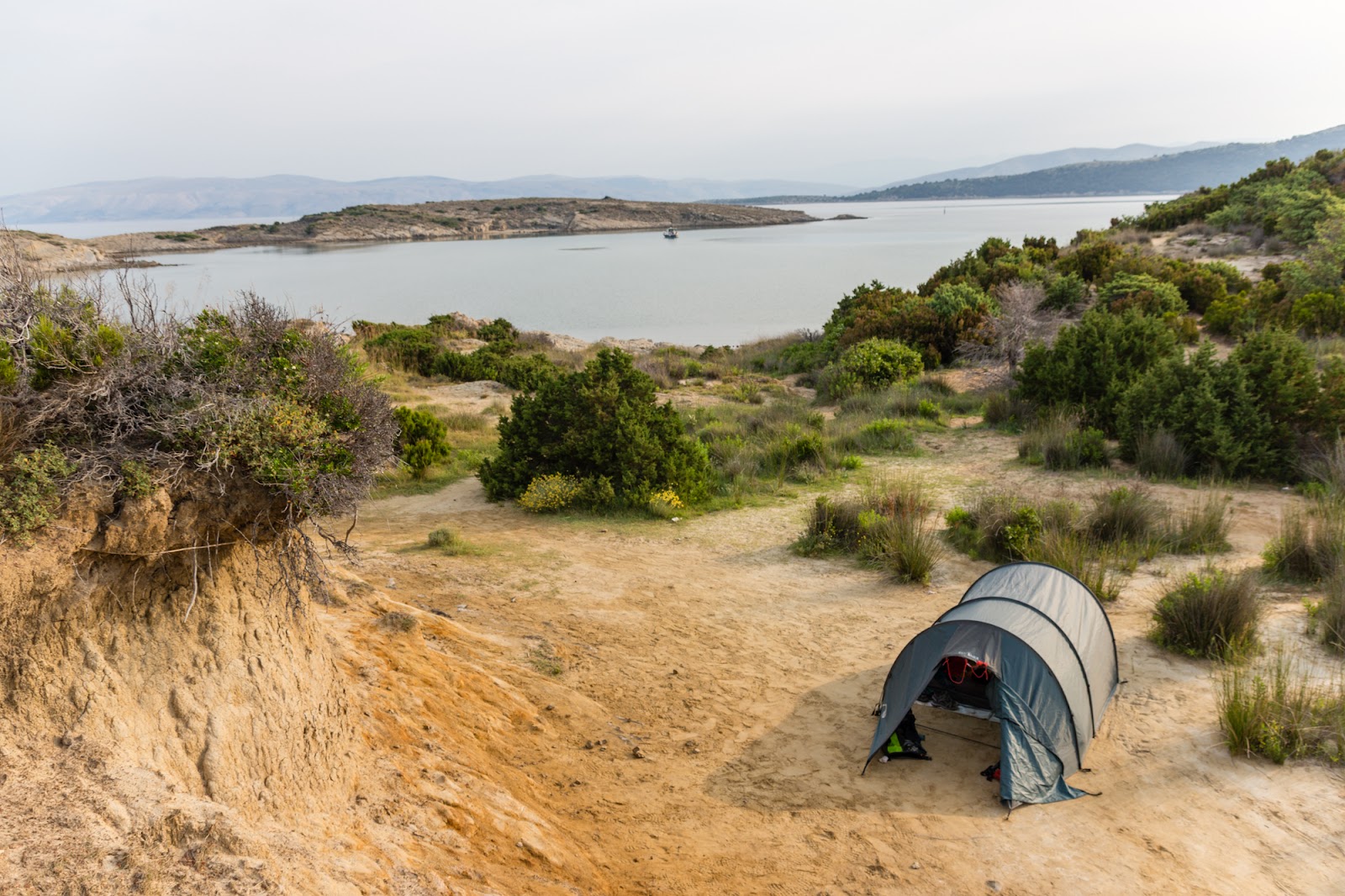 That afternoon we got to the ferry which connects Krk and Rab islands. As we found a shady place to stop we spotted two other cycle tourists also waiting! They came over to say hi…. the conversation went something like this:

Us: “Where did you guys cycle from?”
Them: “Germany – Berlin. And you?”
Us: “Also Germany. How long have you been on the road?”
Them: “One month. And you?”
Us: “Six weeks. Where are you cycling to?”
Them: “We are cycling down to Greece, and then from Egypt to South Africa.
Us: “hahahah!!!! Sorry, we’re not laughing at you. We are ALSO going to South Africa!!!”
Them: “And then we will cycle the rest of the world.”
Us: “Oh, no – just South Africa for us.”

We couldn’t believe it. What a coincidence! Both cycling from Germany to South Africa and catching the same ferry on the same day. Either very coincidental or there are a lot of people cycling through Africa out there. 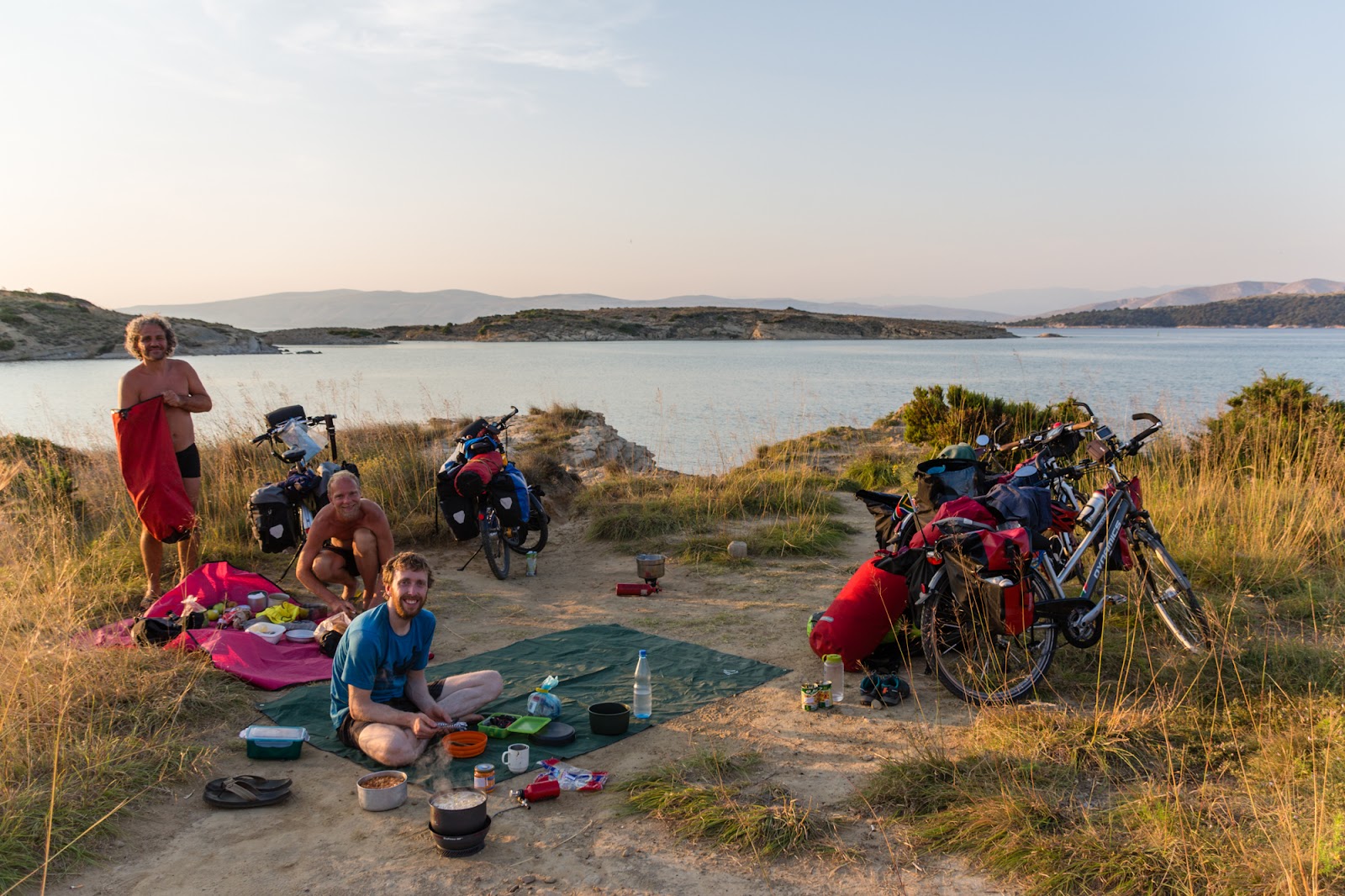 Their names are Vincent (French) and Michael (German). They packed up their lives in Berlin and are taking on a world cycle tour for the next three years. We chatted on the ferry to Rab, hardly taking in the scenery as we were too excited to meet them.

When the ferry arrived on Rab island we decided to wild camp together and found this gorgeous cove beach to camp on just a few kilometers away. We took a dip in the sea to cool off and had a great time chatting over dinner and a bottle of wine. They are such relaxed and open people and meeting them has been one of the best highlights of our trip. 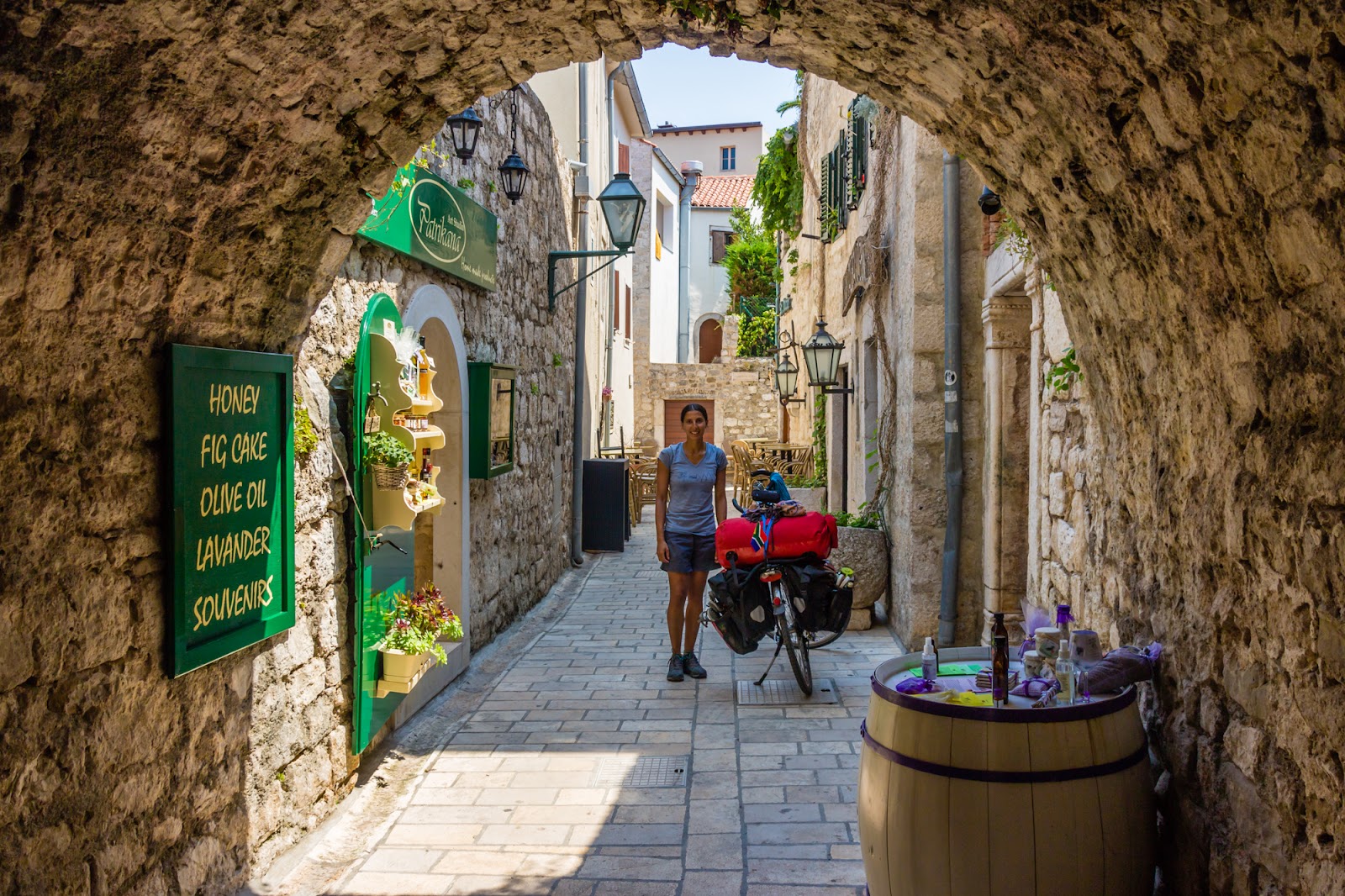 The next morning Simon and I were keen to cycle before the morning heat and headed off a bit earlier than Vincent and Michael. As there is no official ferry for vehicles between Rab and Pag islands, we decided to cycle to Rab city anyway and try and find a boat that would take us, the bikes and the gear. It actually turned out to be no problem – after some bargaining, we had to pay 250 KN (about 35 EUR) for an entire taxi boat. A bit pricey but if we took the other route via the mainland we would have had to pay 20 EUR in total for the Rab to mainland ferry, not to mention the further distance to cycle. 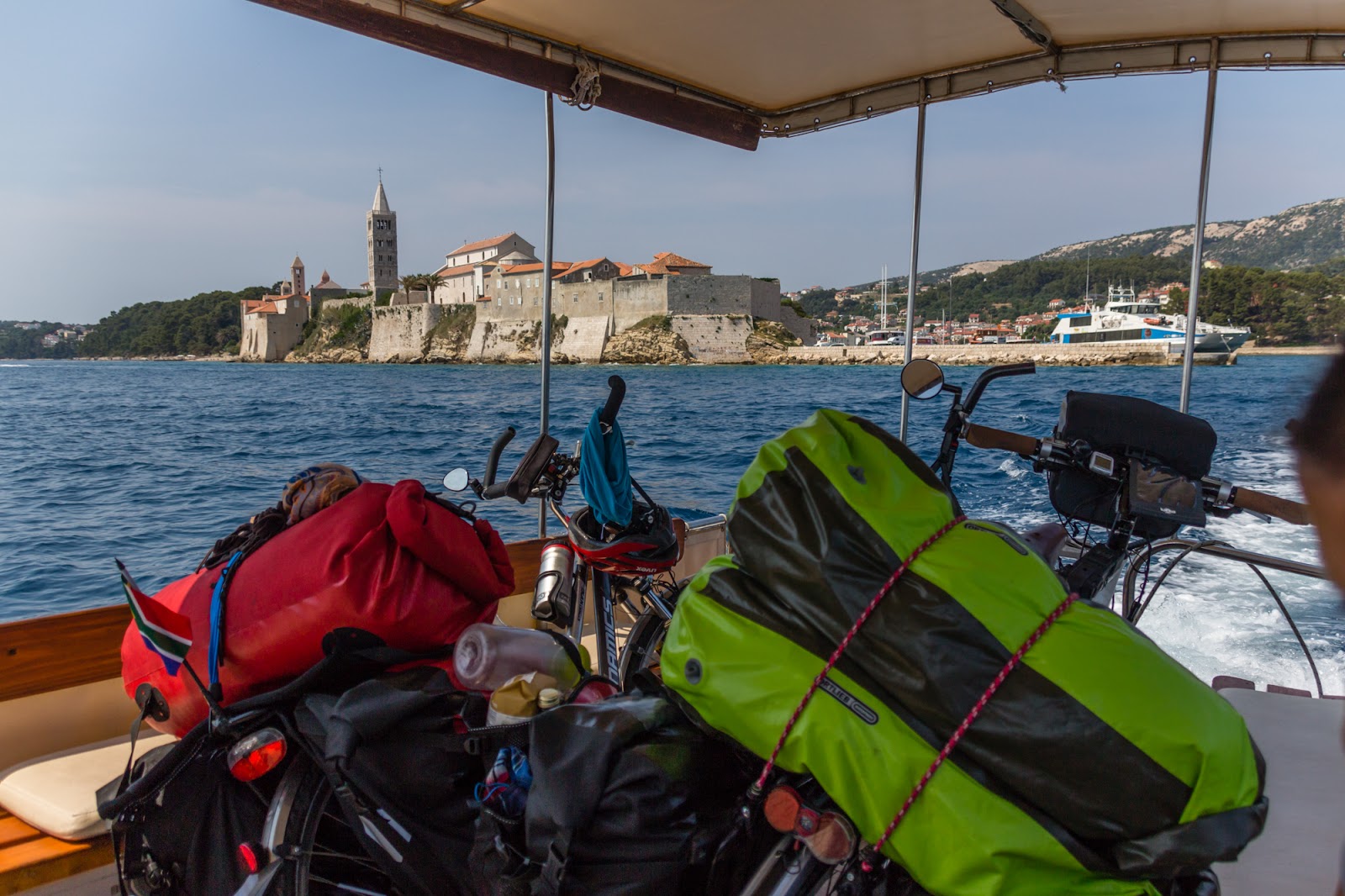 Taking a taxi boat from Rab to Pag Island

The city of Rab itself was quite beautiful. It had old limestone buildings next to the sea and the view of the old town from the open blue water was pretty. Another bonus was the dairy-free, dark chocolate ice cream in the main square.

The boat dropped us off in Lun, a small town right at the edge of Pag Island. The water was too tempting and we quickly found a spot to park the bikes and swim. Watching the sunset over the sea was breathtaking and somehow, all our troubles left our mind and we were totally relaxed looking out over the sea. 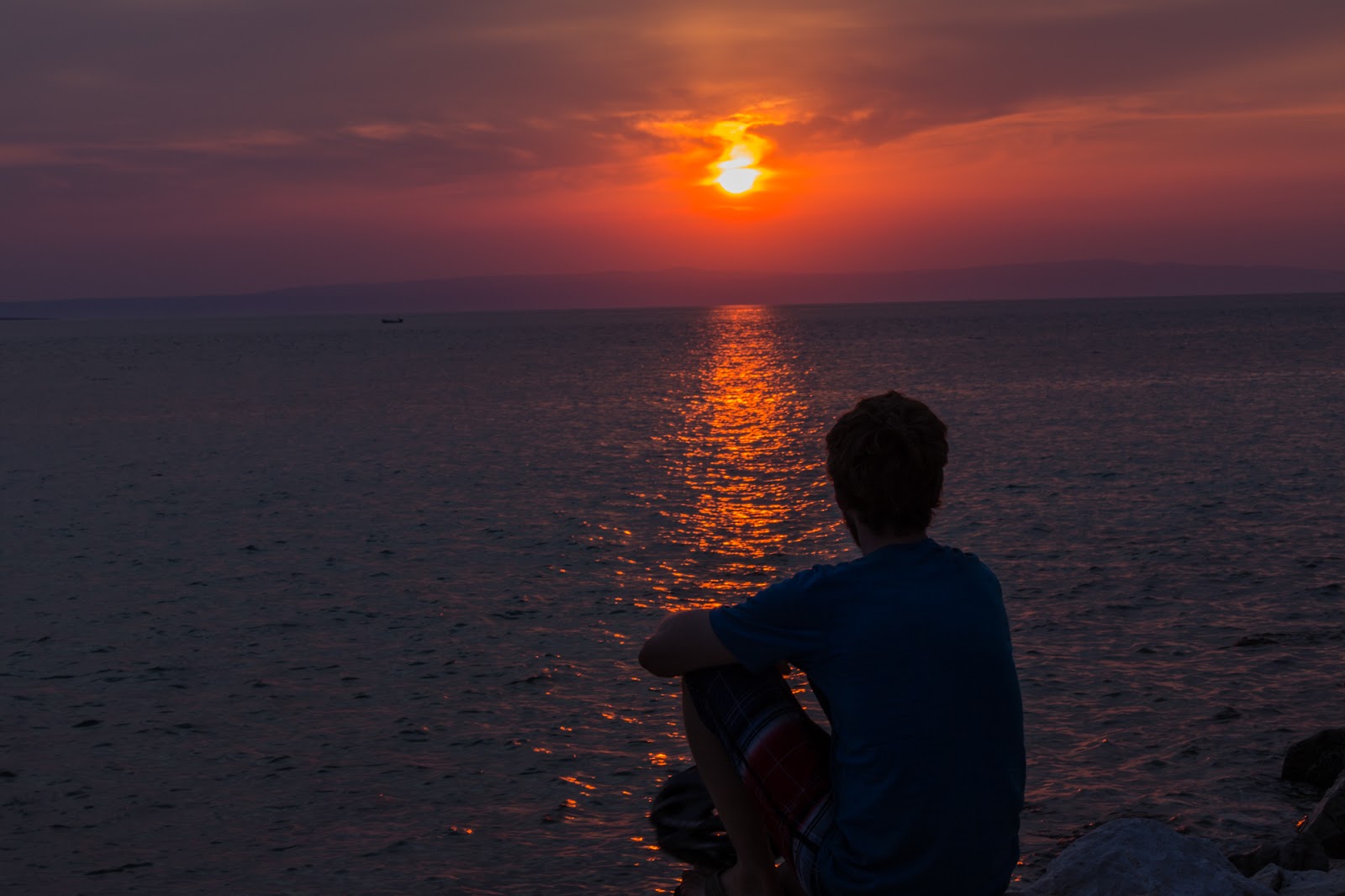 Sunset in Lun, on the edge of Pag Island

We searched for a place to sleep but we were not so successful… we ended up sleeping out in the open on the edge of the island but close to the town. Mosquitoes and insects attacked us the whole night and we woke up in the early hours of the morning to find a herd of sheep grazing around us.

We started cycling the length of the island the next day. When it got closer to midday it was again impossible to cycle in the heat. Although the islands are beautiful, thanks to the Romans they have no trees. That means no shade. Fortunately, a beach was never too far away. In the evening we camped on a cliff edge. The sea was in front of us and the village lights across it were twinkling in the dark. 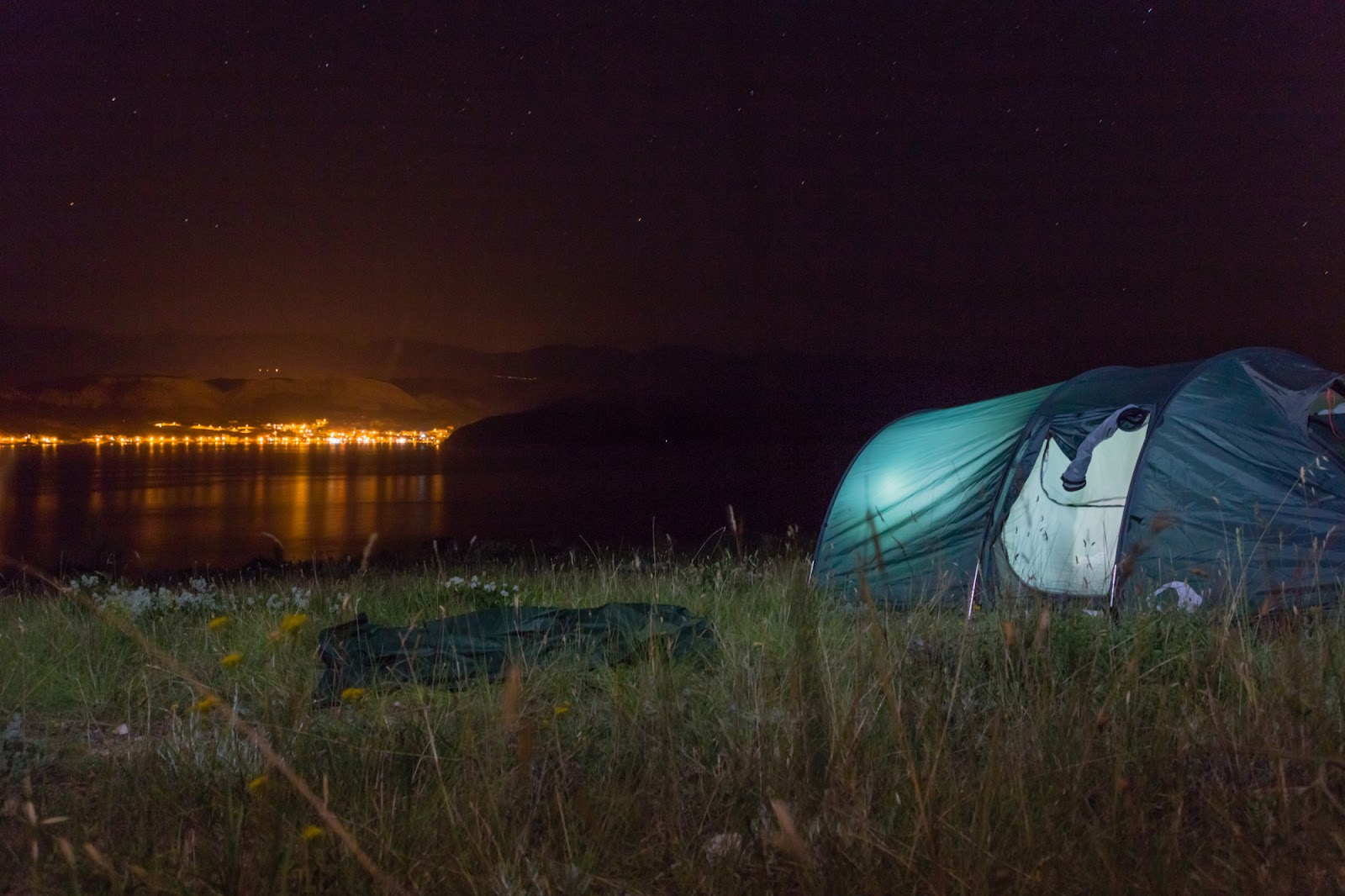 Camping on Pag with the city lights across the water.

In the morning we headed to Pag city and accidentally met up with Vincent and Michael again who were taking cover in some shade. We had to laugh when we saw them again. We also met a lady who gave us some good tips about the island and let us charge our phones. After having some lunch we said our goodbyes and headed for a beach she recommended. It was a beautiful beach and we spent a relaxing day there.

In the late afternoon, though, the wind picked up very suddenly and we knew we had a storm on our hands. Before everything blew away, we packed our gear up fast and started to ride away from the storm. There was a dark purple wall behind us and somehow, we doubled our average speed as we rode away. 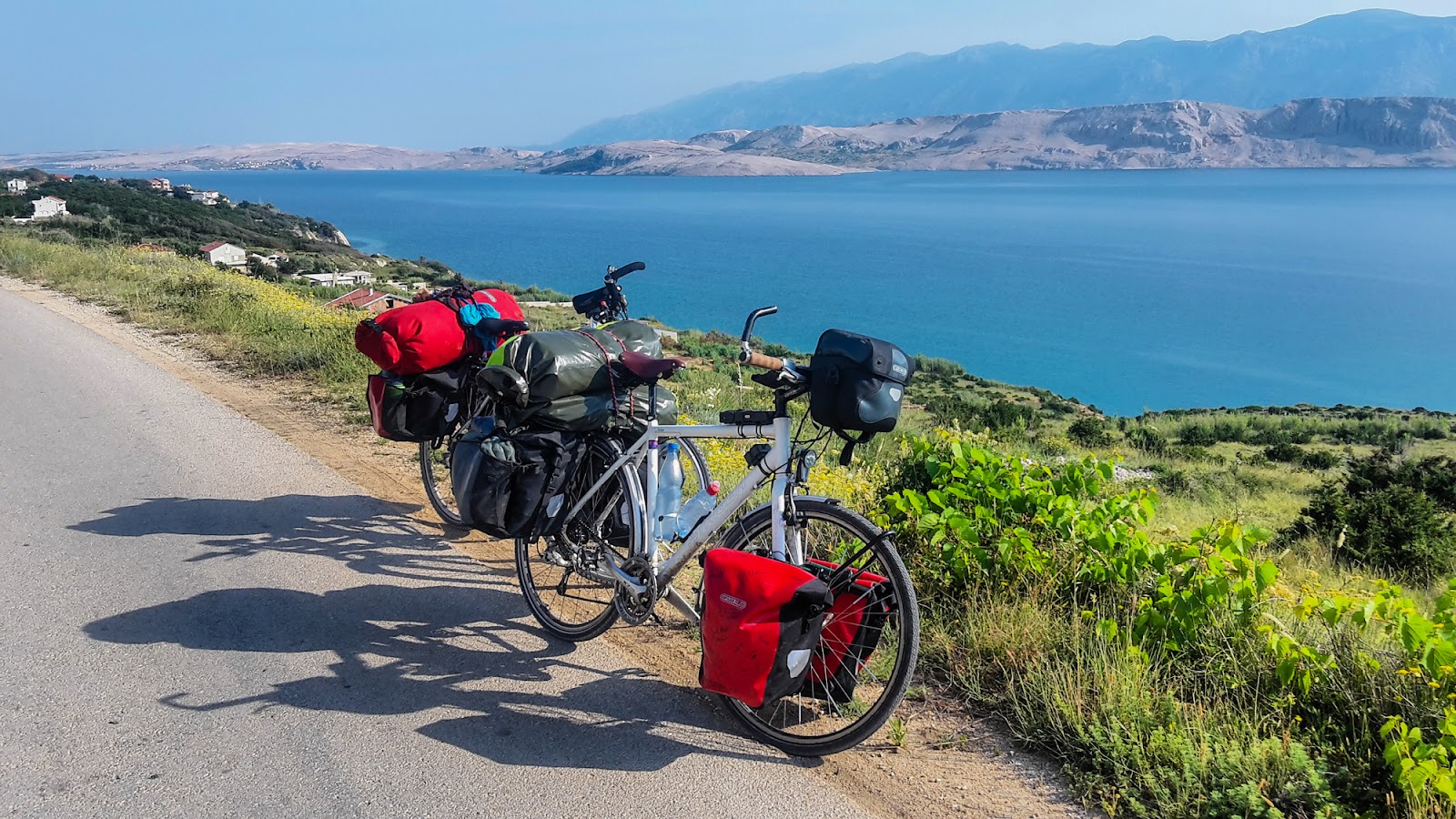 Every time we looked back we could see lighting coming down to the sea. The wind was in our direction (good) but that meant so was the storm (not so good). The strong wind allowed us to ride faster than the storm. Eventually we crossed the bridge on to the mainland and we saw one of the most magnificent sunsets. The sun behind the thick clouds over the bridge lit up half the sky as if it was on fire.

Looking to the left of this magnificent sunset was another storm – even more intense. We had to stop for water at a tiny kiosk bar on the top of the cliff and within this time another storm somehow caught up to us. 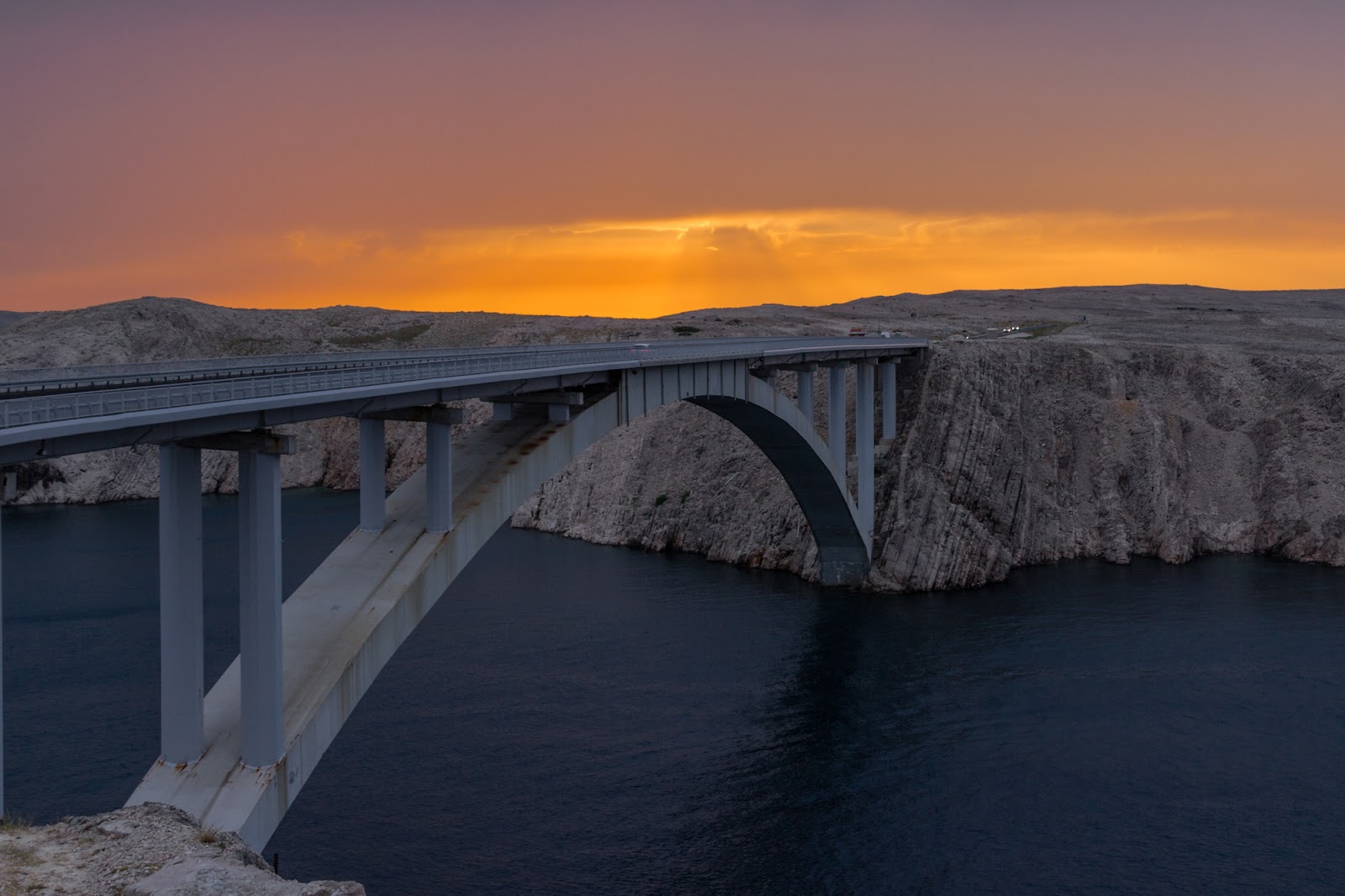 It was as if we had just arrived in time for the show and it didn’t disappoint. Lightning was striking every few seconds – some horizontally across half the sky and some down to the ground or sea. For the first time in our lives, we saw one lightning strike hit another one: one from below and one from on top. The strikes joined and then exploded upwards into three parts. We also saw a double lightning strike, following the same pattern to the ground.

The only disappointing part was that the lightning was in the direction we had to travel in. By this time we were all alone hiding from the rain next to a small building on the top of a cliff. We didn’t want to be stuck here the whole night so we made a decision to ride into the heavy rain. The lightning luckily seemed to have moved a bit further into the distance and we headed out.

A few kilometers down the road and soaking wet, we took refuge at a hostel called ‘Odmoree’. And the next day we found ourselves back in sunny, hot weather relaxing by a pool with a gorgeous view. Sorry, not sorry. 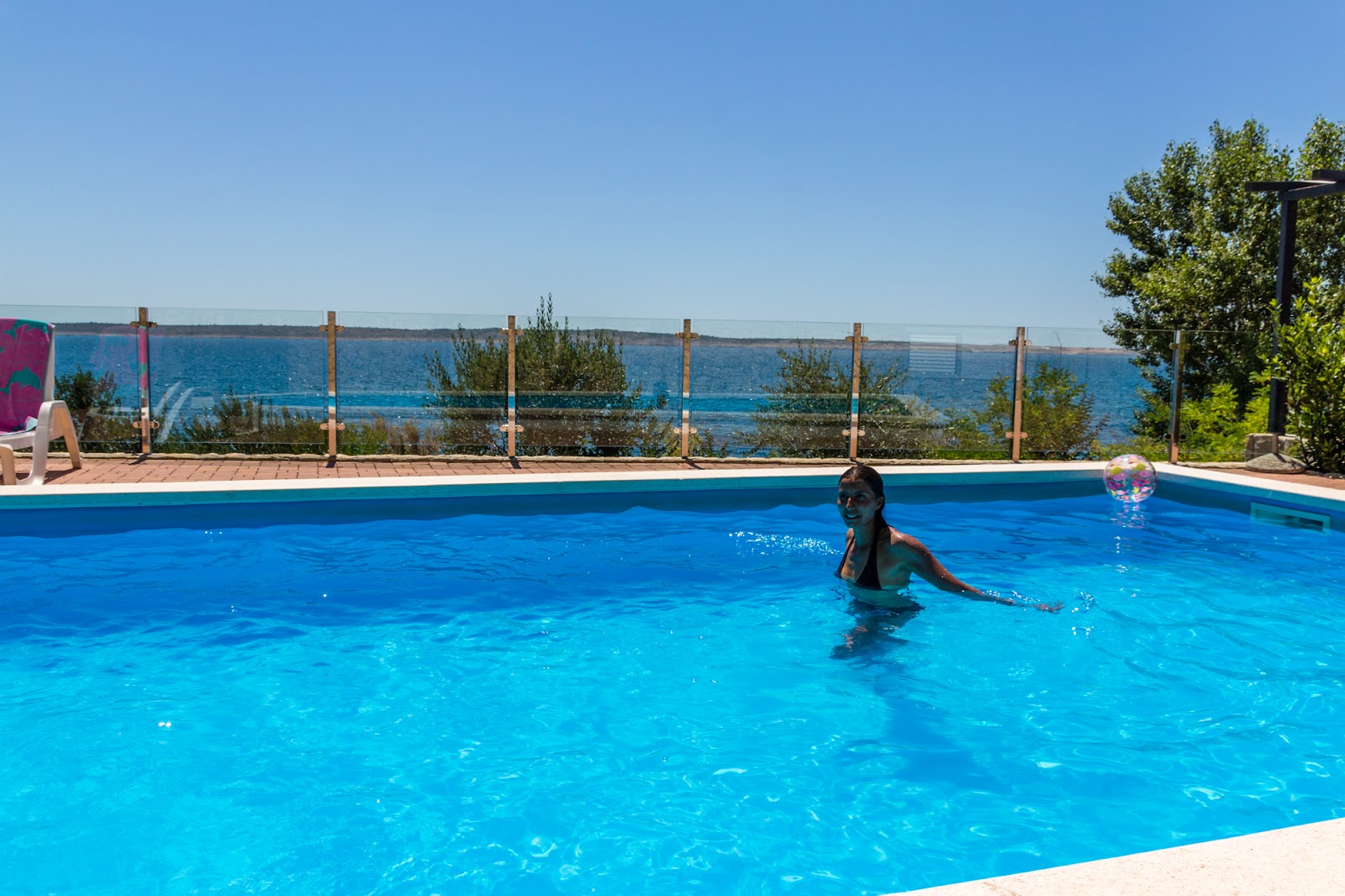 Swimming pool with a view at the hostel ‘Odmoree’

Simon was not sure if Tanya would ever leave the water. But in the evening, around 7pm, we eventually left the hostel and cycled towards Paklenica. On the way we passed a small Croatian village with two sweet elderly ladies sitting on stools next to the road. They were chatting and making jokes with the villagers and with us as we passed, hopefully laughing with us and not at us.

Our next stop was Paklenica National Park that has been on Simon’s dream to-do list for a very long time. Time to come back and discover this place again!

For more photos from the first part of our trip in Croatia, click here.