First let’s start with the good. The scenery. The many hellos. The friendly locals. A few kilometers out of Luxor a man standing next to his field raised his hand high and shouted, “hello, hello, hello,” with the widest eyes. He then ran out of his English vocabulary but that didn’t stop him from continuing, “huh, huh, huh”. 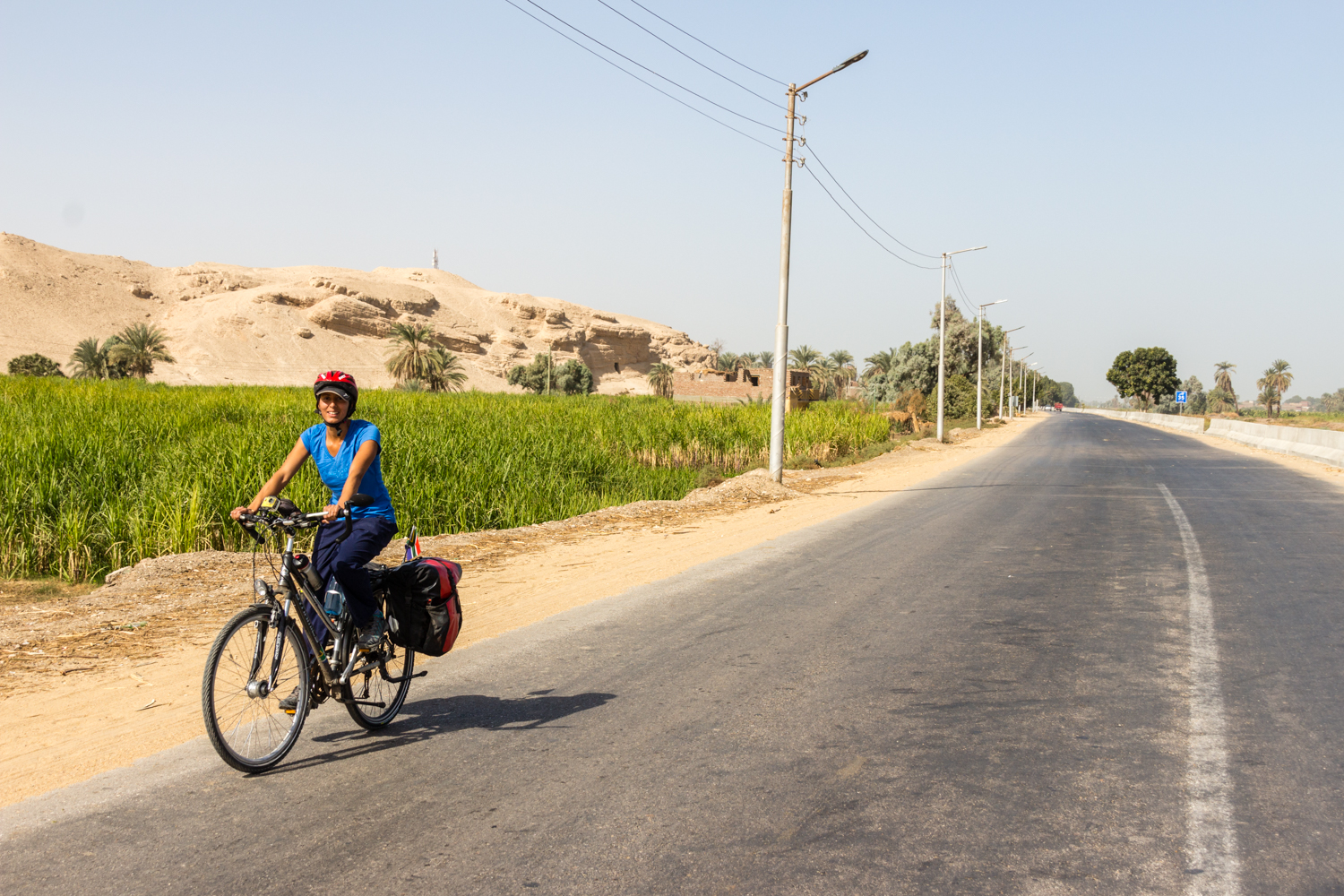 To be honest, although the locals were friendly we were glad for a small channel between us and the towns for about 20 km. Many kids asked us for money, even though they would have to swim to retrieve it. We stopped at a cafe and watched the usual gathering of men coming together to watch movies, play board games and watch TV. We drank our Turkish coffee while watching an old cheesy Japanese Kung Fu film that two teenagers had put on for us. Soon after, we saw a 10 year old boy welding his bike.. with no protective glasses on.

This area was sugarcane land and the stuff can be found everywhere you look. People are munching on them, it’s loaded on to their donkey carts, on to their motorbike cars and on the side of the road. Trucks are loaded with them.. so loaded in fact that a massive tire blew out right next to us. Sugarcane trains snaked their way through the fields next to the Nile. It was a beautiful sight and reminded Tanya of her hometown and running after the sugarcane trucks as a kid. 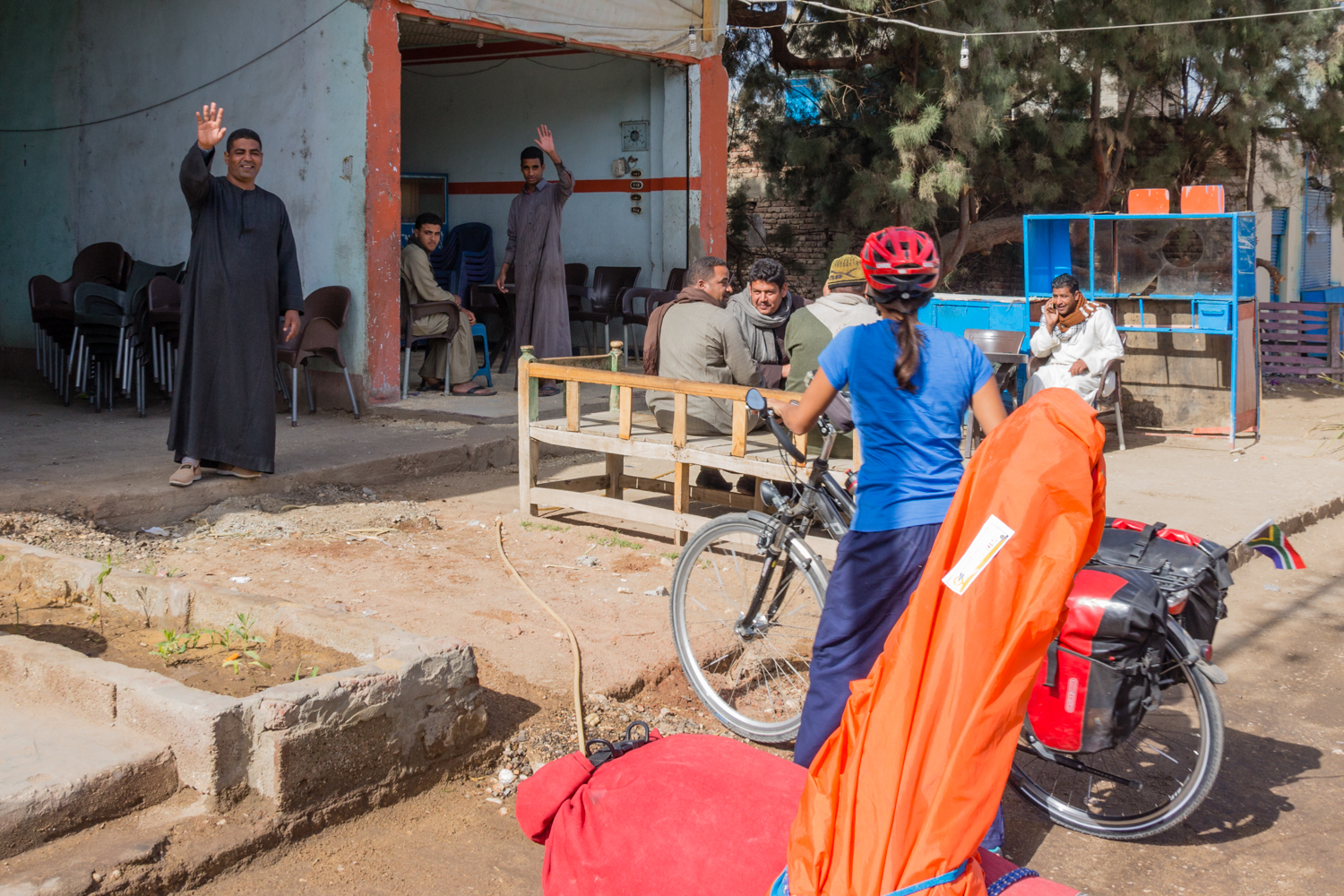 Unfortunately, these sweet sugarcane were also used as weapons to throw at us or hit us with.

Young boys. What is up with boys in puberty? Is it universal? Is it just this bad in Egypt? How these little devils grow up to be the kind, welcoming men of Egypt is hard to comprehend. As wonderful as the sugarcane fields were, the boys between 10 and 16 were definitely not. When the boys are together, it became exponentially worse. We are no psychologists but this may have something to do with wanting to prove themselves in front of friends and the extra testosterone they evidently can’t handle. 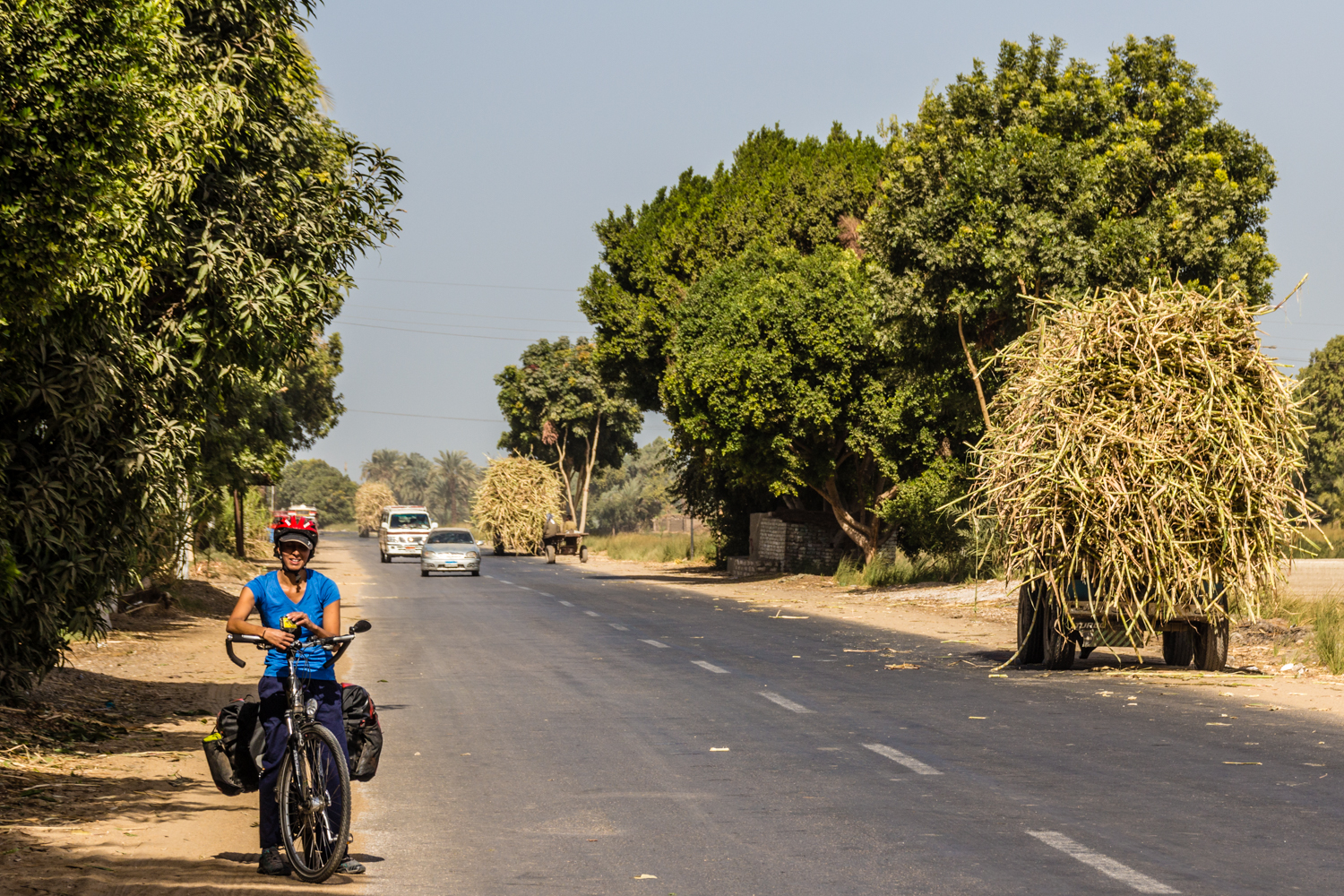 We passed many boys playing soccer on an empty field. As soon as they saw us, they all immediately picked up stones and ran towards us… they have obviously done this many times before and didn’t feel the need to consult each other. When we saw boys together or a soccer field of them, we would shout to warn each… the same procedure we use for dogs. I am not trying to be rude… that is really the procedure we use for dogs! Boys aren’t as fast as our furry friends, so this time we would speed up to try to outrun the boys. 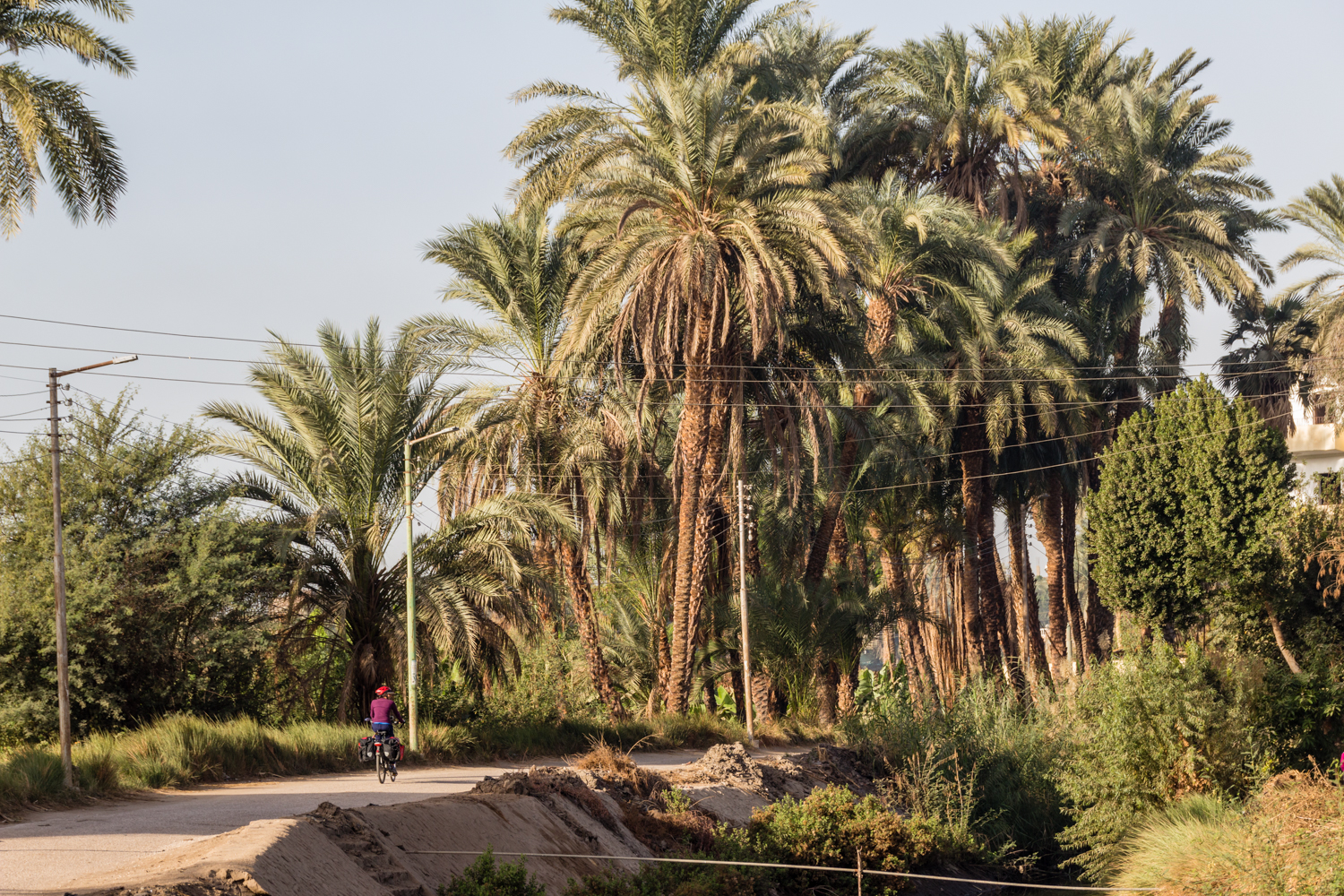 In one town, we passed a cow being slaughtered on the street, and just after that two boys in their teens came out with sharp butchering knives towards us, threatening us with them. Not very surprising, since they must be used to killing.

After a lunch break, we passed another small town… a group of boys came out of a yard. They first threw stones, then surrounded Simon’s bike, pulled on his panniers and hit the panniers with sugarcane. We both stopped the bikes and shouted at them and they looked absolutely shocked that we stopped the bikes and confronted them. They didn’t know what to do.

The adults who witnessed this turned around to help us and drove in front of the boys. One man on his motorbike apologised for the kids behaviour. 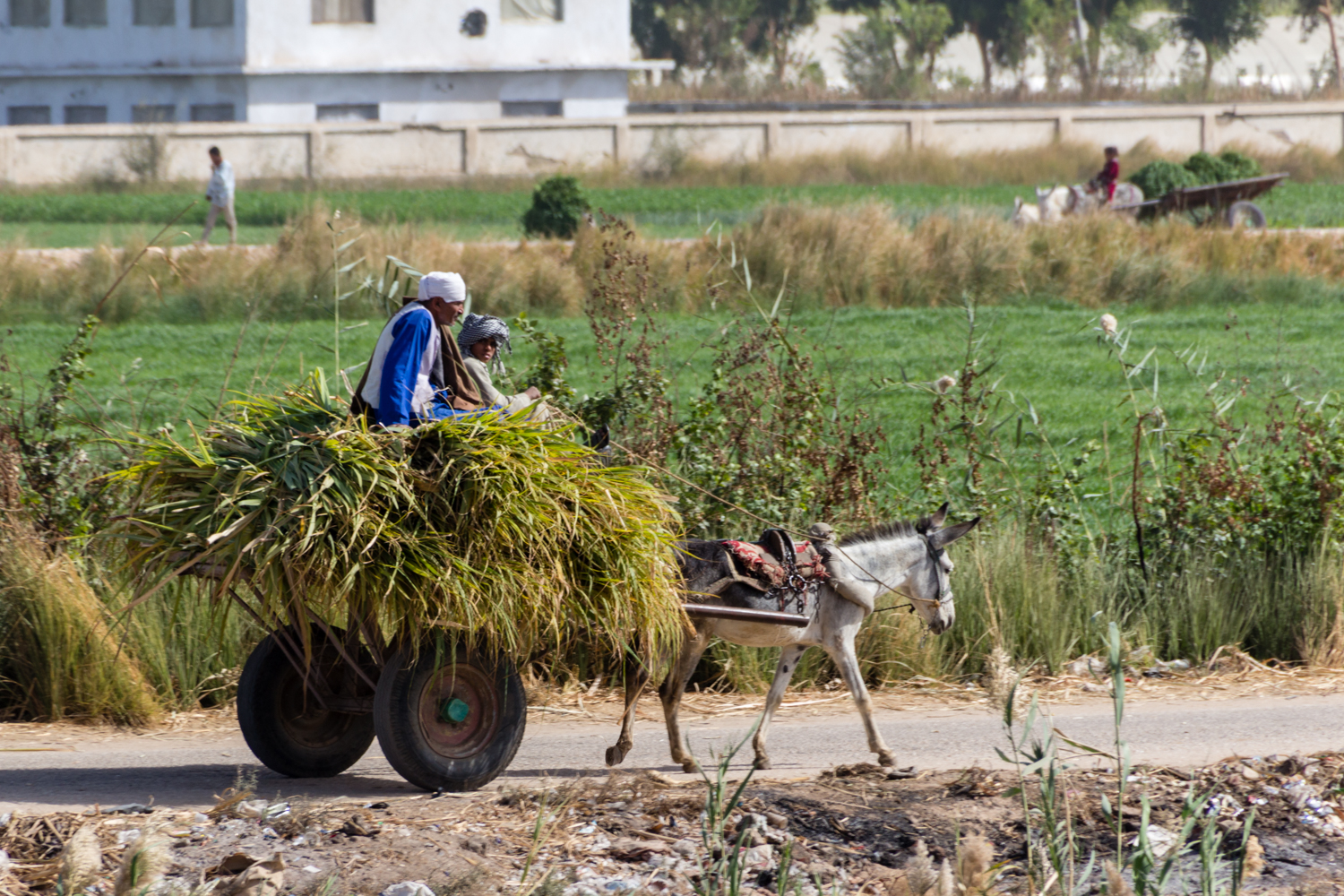 This point is very confusing for us. The adults and girls in this region were the usual, amazingly friendly people we encountered further north of the Nile… but the boys were something else. The day was very exhausting for us. What we even found more difficult was switching between angry and happy, rude to polite, within a second. We would encounter stones being thrown at us (one was a decent sized rock) and then we would greet an excited, happy and welcoming adult the next moment. Also, when the mothers are around there’s not even a peep from these boys – quiet as a mouse.

Another difference with further north is that kids from Luxor to Edfu ask for money…. no hello, no welcome, just “money? money? money?” The same ATM mentality we experienced in Luxor. This is the region also used to more tourists, so maybe they can’t help but see dollar signs when they see a foreigner. To top things off, a guy at a Koshary place tried to rip us off and charge us double the price… It’s a koshary for goodness sake! He did not realise what a day we had had and that we know the Indian number system. Our advice – learn to read and pronounce the Indian numbers. We would take the many selfies and welcomes we got between Cairo and Sohag any day over this.