The People of Sudan and their Hospitality (Sudan #2)

We had heard the Sudanese hospitality was great, but just how great I never understood until now. The first family we stayed with since cycling out of the desert was no exception to this. We had stayed the night in a dirty hotel room, in Dongola, Sudan. It was also the cleanest in town. Even after washing the dirt off in the hotel shower, we felt filthier than before. But luck was in our favour and at breakfast we met Abdel at a cafe in town.

“Ah. Hello!” He beamed at us, with a friendly smile. “Do you speak French?” His name was Abdel and he lives in France. He comes back to Sudan for two months every year to visit family and enjoy the nature. 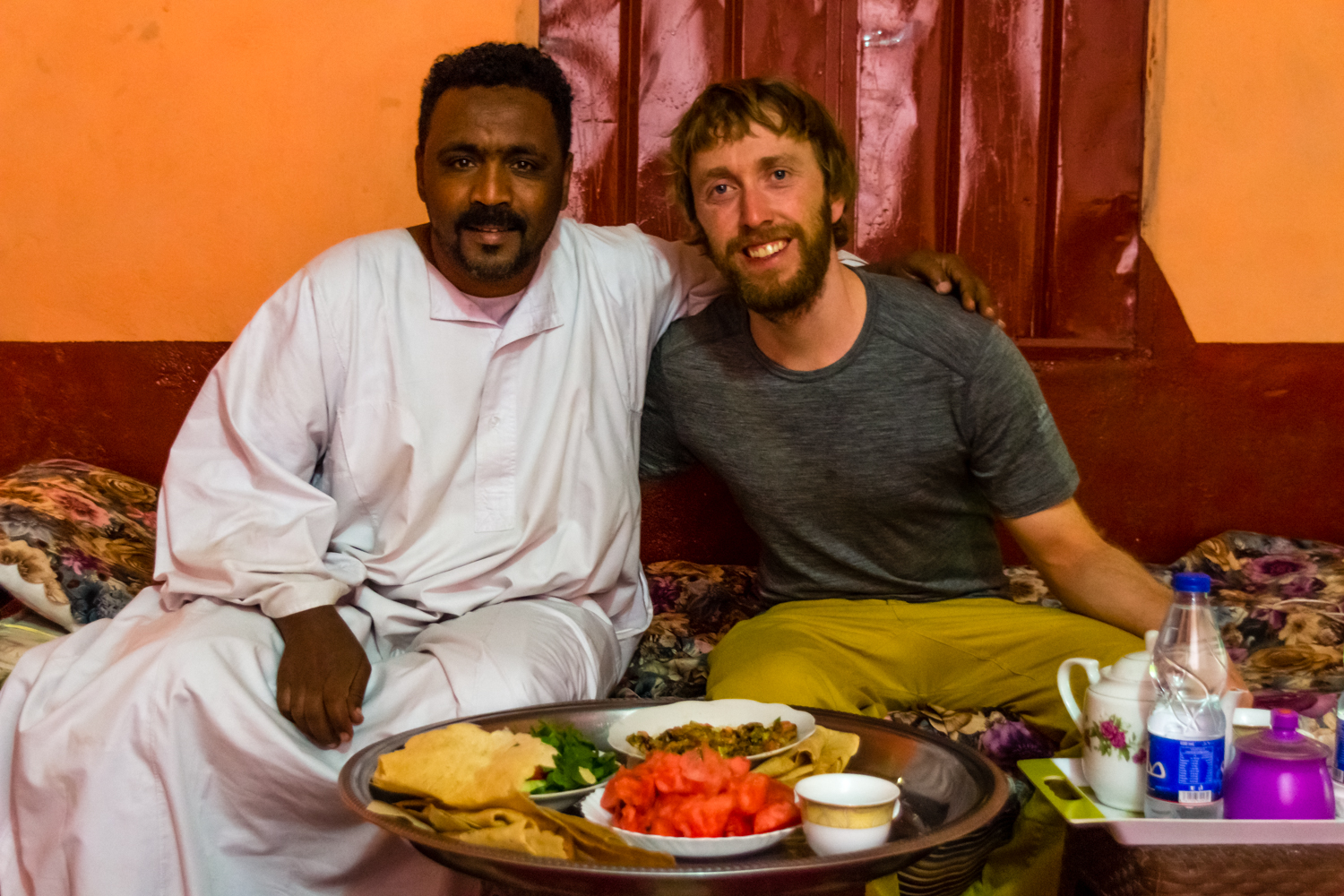 After Simon conjured up his high school French, Abdel invited us to visit his village and family. We jumped at the opportunity! We used the dirty hotel as a locker room instead and hopped in his car. Now, I know what you might be thinking and yes, normally this is a no-go. Flashbacks of my mom telling me “don’t accept sweets from strangers” popped into my mind. But this is Sudan… I have more of a chance of being struck by lightning than being kidnapped here.

Twenty minutes drive later we entered his home and his mother greeted us with a big hug. We went into the communal guest room where we got lost in conversation. Literally. We literally got lost in translation. It was no problem though because her smile said plenty. She sat on one of the four guest beds that lined the walls. While we chatted with Abdel’s brothers, she clutched onto the necklace of beads in her hand, rocking slightly back and forth to the soft hum of prayer.

Abdel and his brother, Ibrahim, showed us around their village with some inquisitive kids following us shyly. The scent from their garden herbs filled the air and we entered their garden to see bright red tomatoes and aubergines. They showed us their brick making station and how the few traditional straw houses worked with a cooling system. Close to their water well, they enjoyed time under a large, old tree in front of their home. The men usually have a siesta there, play card games and enjoy coffee together. 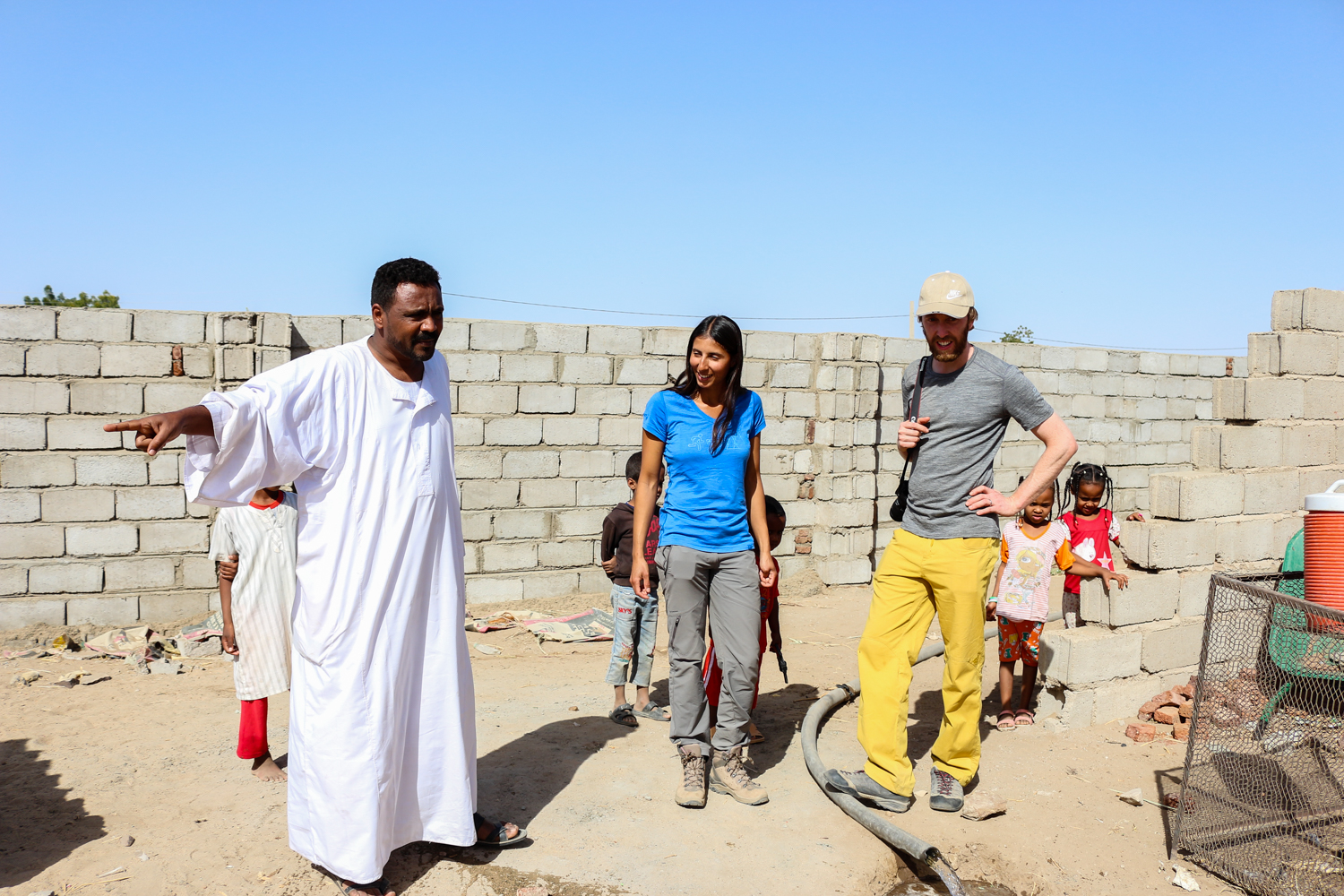 Abdel and Ibrahim showing us around their village

We came back to Abdel’s home to find some elderly ladies visiting. One lady was convinced Simon was a medical doctor and could help with her sore knee. We had to explain that he is a doctor but the more unuseful kind. When I met them, they completely embraced me like a long lost granddaughter. They hugged me many times, said loving things in Arabic and showered me with kisses. It felt like three grandmothers fussing over a loved one! Now, if only everyone could fuss over me like that. I noticed the elderly women had four slits down their cheeks. They are tribal marks that used to be practised in Northern and South Sudan. 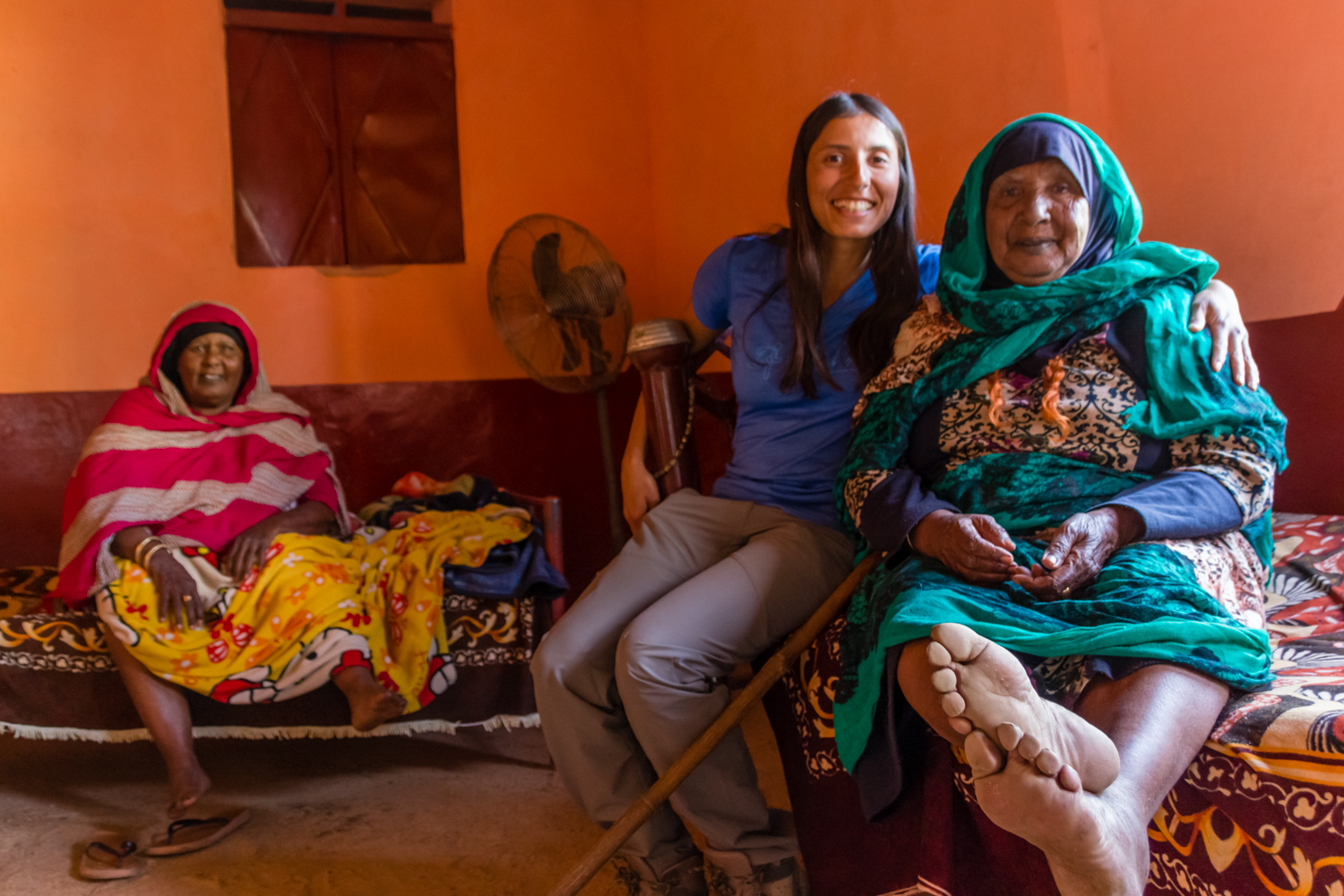 The women were dressed in a tob, the traditional female dress of Sudan. This is a five meter piece of cloth that they drape around their body, head and sometimes also their face. Before I came to Sudan, I was worried about how I should dress. We had read that women were arrested for wearing pants at a party in Khartoum, even though they obtained a permit to do so. But after cycling here, we had no problems. We didn’t want to offend anyone, though, so we covered the provocative sight of our knees, at least. 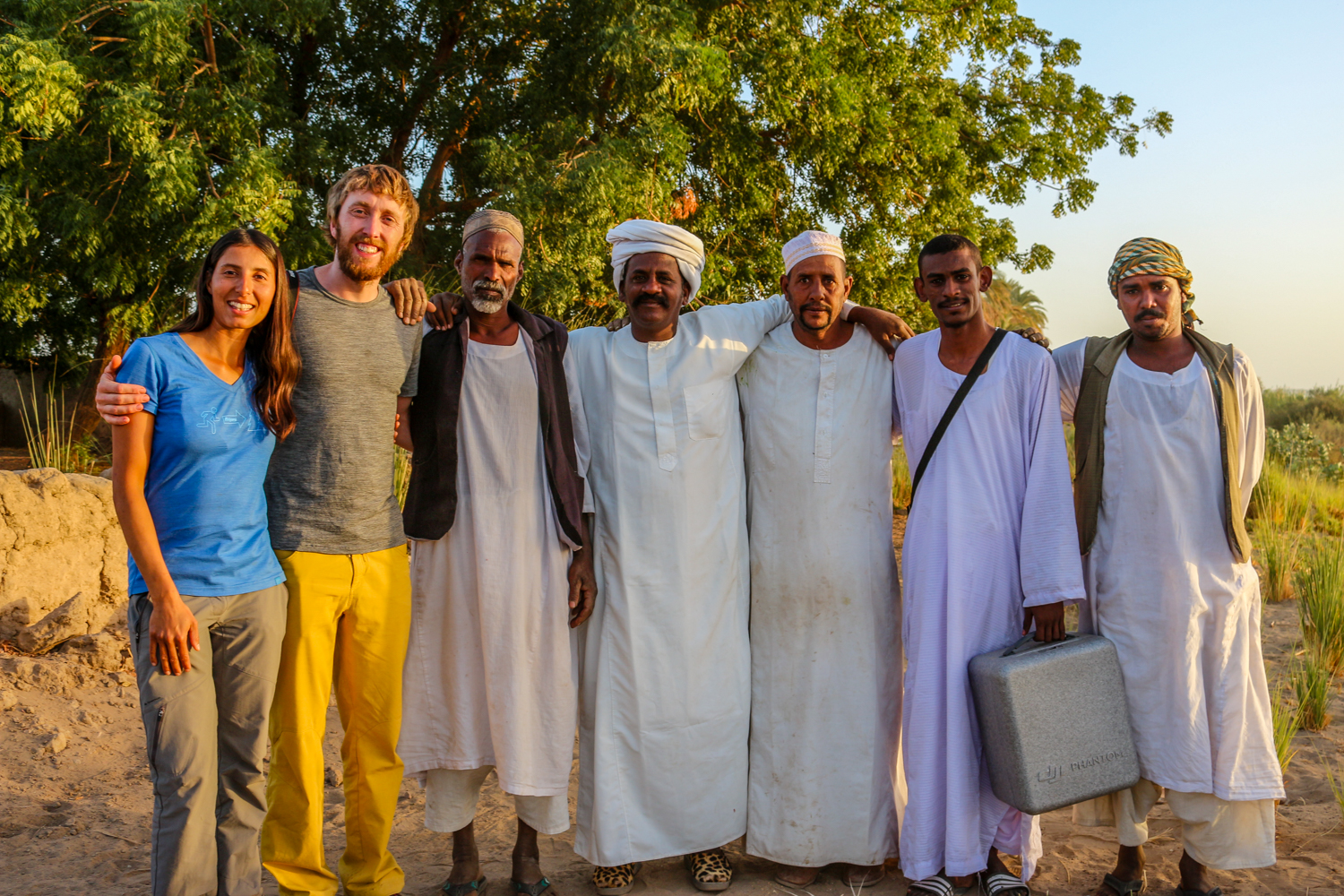 Next to the Nile

Social norms of how we act towards people can be confusing. We noticed, that even within one family, there are different forms of religious and cultural beliefs. This extends to different ways of how women greet and dress in front of men. Women always greet each other with a handshake and several kisses on the cheek; men tap each other on the shoulder before shaking hands. Usually, if the woman shows her face then Simon will shake her hand. However, if she only shows her eyes and not her face, then it is customary to keep a distance and wave instead. 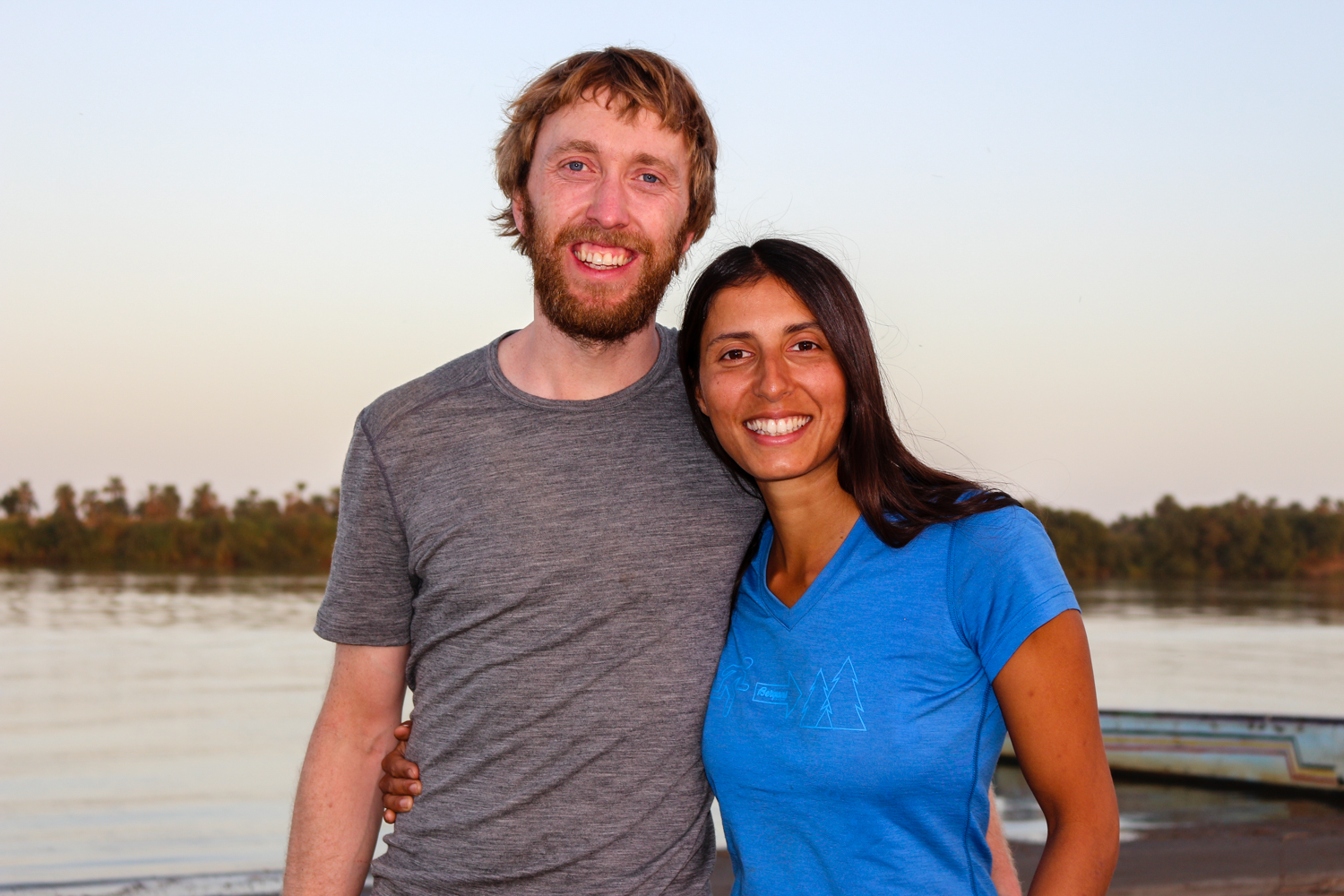 I have come to realise, that we all lie on some spectrum of acceptable behaviour. For many people in westernised countries, there is a notion that we are leaders of the free world. In many aspects, that might be true. But in terms of dress in Europe for example, it would be unacceptable for a women to walk around topless or a man to bare his ass. Well, go to the bushmen of the Kalahari or tribes in Southern Africa and that is what you will find. Maybe they view Europe as too conservative? The Sudanese have a certain moral dress code that they conform to and I have realised that unless I or anyone else is walking around naked, then so do we. 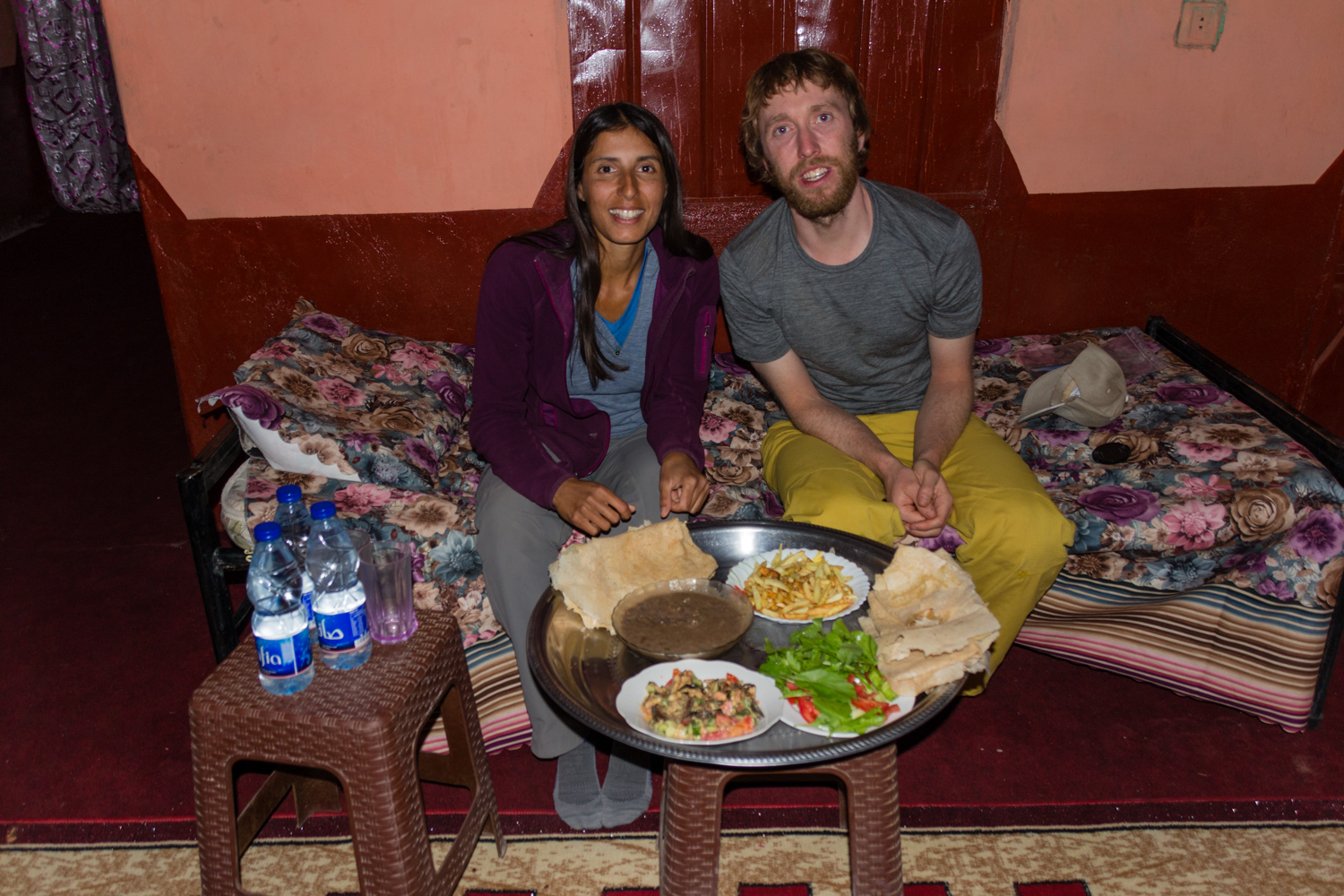 After this delicious lunch and the welcoming Sudanese hospitality, Abdel treated us to something unexpected: a boat ride across the Nile followed by Abdel’s DJI Phantom drone! Yes, you heard right. You can read about our surprise river crossing and watch the drone footage in our next post. 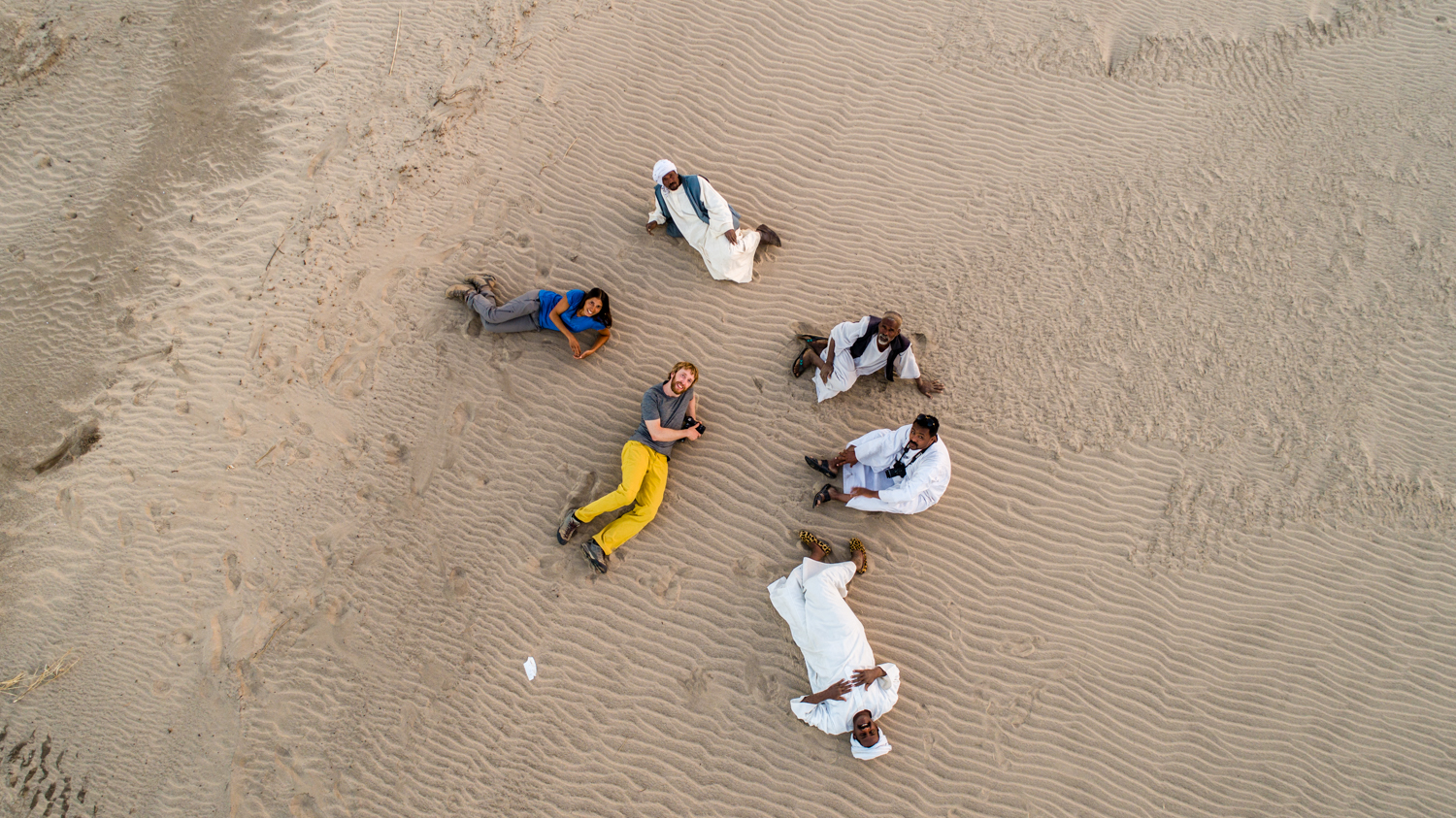 After coming back from our Nile adventure, I was invited into both worlds… the mens’ and womens’. Genders are separated in many areas of life in Sudan. In the home, women usually have their own communal area where they socialise without covering their head or face and men have theirs. Ladies from the village came to visit and I sat with them in their area of the house. They were very excited to see me. I showed the bubbly women my printed photographs of our family and the trip. All of them were trying to get a peak. They loved it!

The girls in the family and I spent the evening giggling together in the kitchen. One of them, Omnia, showed me how to make Kisra, a thin, crispy, sour bread. They made it by spreading a thick dough across a massive iron plate. Underneath, they burned dried palm tree leaves that they had collected for a stable temperature. We took selfies together and they even made a T-shaped Kisra for me. 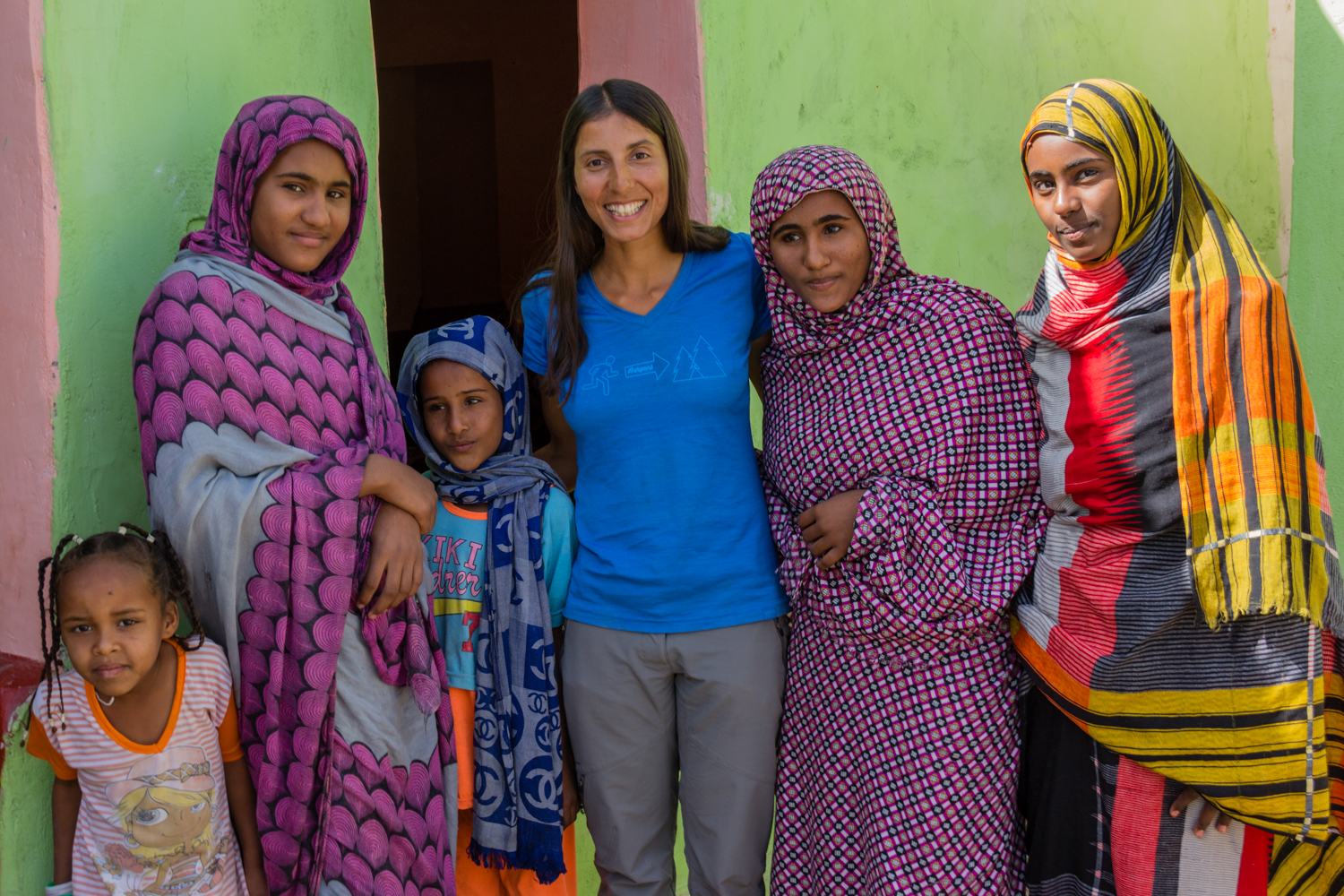 They grew all the food on their farmland, ground or refined it at home, with their own tools, and cooked it in their own kitchen. Even the grain for the bread was grown on their land. From start to finish, all the food we ate stayed within a 2 km radius… and it tasted gooood!

We said our goodbyes the next morning and were sad to leave. The day before, Omnia, Afra and Ola asked me to stay longer and Ibrahim also insisted we stay for a week. Who on Earth begs you to stay for a week so that they can serve you delicious food, let you sleep under their roof and cater to your every need? The answer is the people of Sudan! Just as I took a step out of the gate – the girls called me. I turned around to see them wave excitedly and blow several kisses at me. It was as if we had a secret to keep… and a friendship as well.