Beautiful. Ugly. Friendly. Rude. Motivating. Frustrating. It had a schizophrenic personality and we were never quite sure what to expect.

After leaving Croatia, we were greeted with a breathtaking view of the outer Kotor Bay with the mountains seen as shades of grey in the background. Another mouth dropping moment for us. 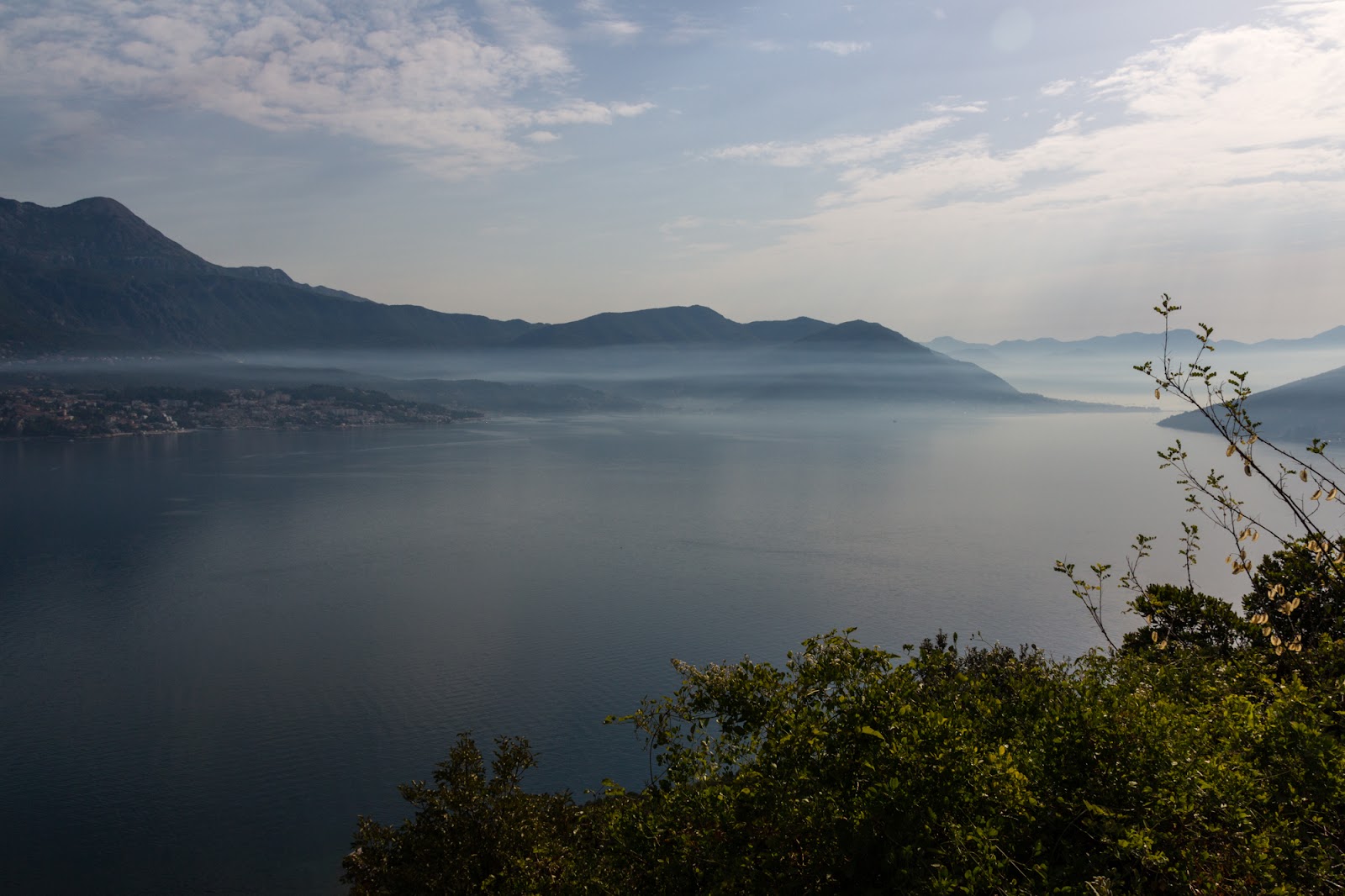 We started cycling the first part of the bay and unfortunately, the amount of tourists packed like sardines on the beach did not fit with the serene view behind. We got so annoyed by it that we had to question whether we should even cycle the inner part of the bay… but we are very glad that we did. It was much less quiet.

Also the shear size and steepness of the towering mountains of the inner bay dropping into the sea was inspiring. Tanya sat at a viewing point just gaping at the unbelievable view, not convinced it could be real.

What was also incredible about the bay was the people. People wanted to shake our hands, were clapping and cheering for us, leaning out of car windows and with big smiles said some encouraging words in Montenegrin (we think). We met two Dutch men on a road trip and two German men doing a road trip from Innsbruck, Austria with their self built van. Then a few minutes after we met another cyclist traveling with a full sized guitar on his back! Tanya and him had both nearly destroyed their guitars earlier that day. 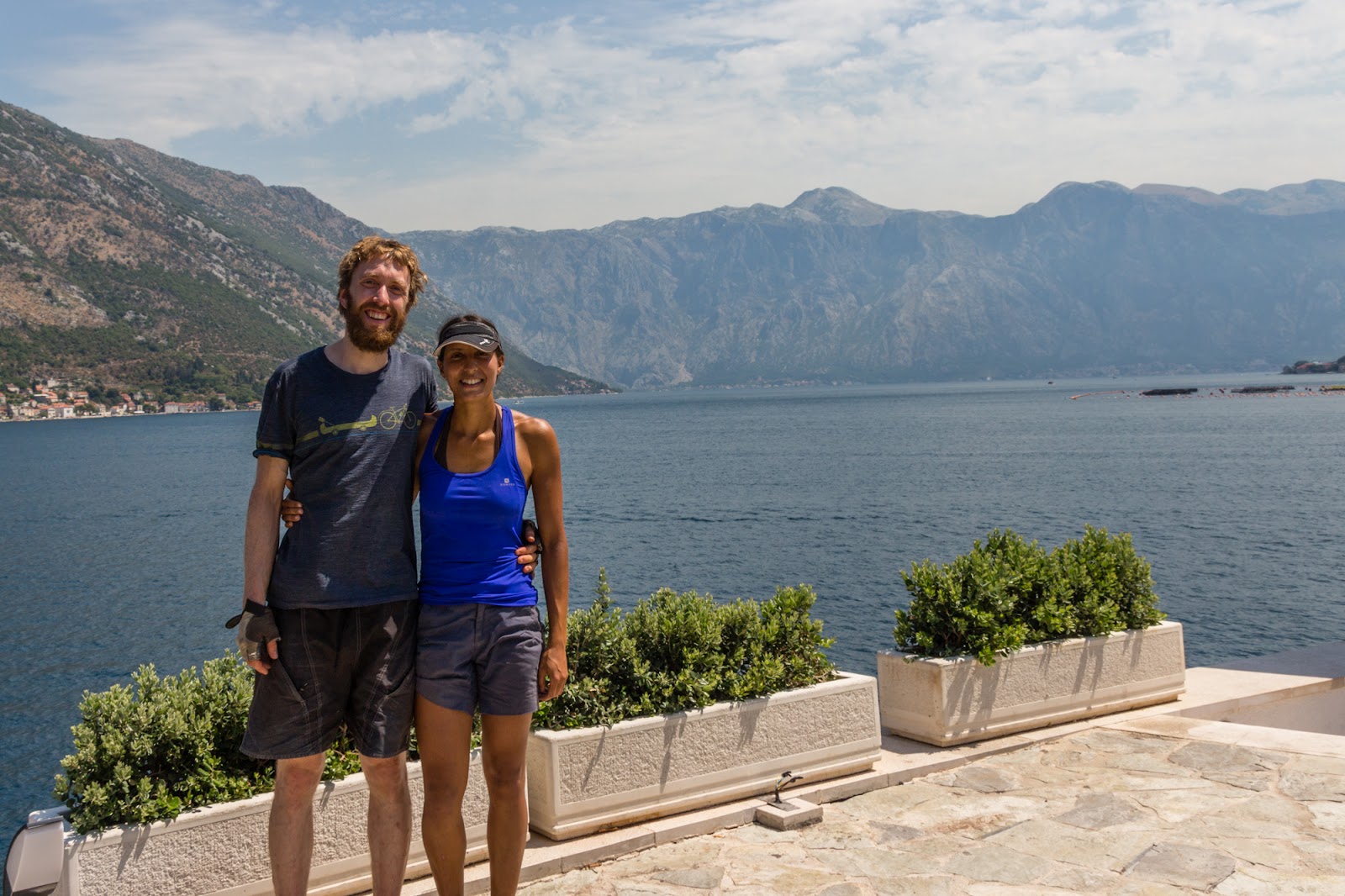 Start of the Bay of Kotor

Later in the evening, another two cyclists – Kim and Keir – came over to say hello at our campsite. They have been on tour for four months and have no planned end date for their trip and it was very interesting chatting with them. 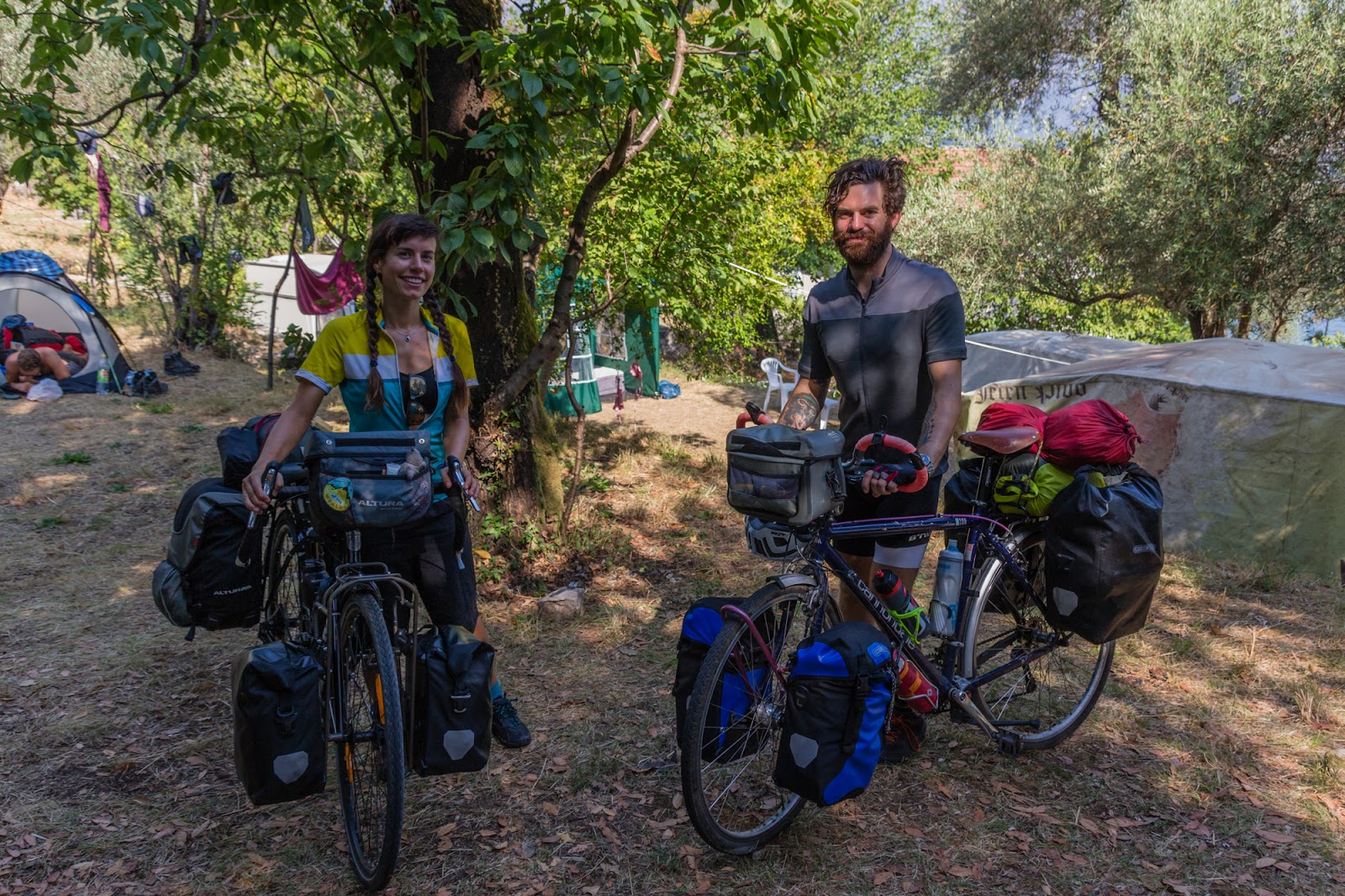 Two other cyclists we met: Kim and Keir

In Montenegro we also got fluent in the language of cars. It is universal and easy to understand: 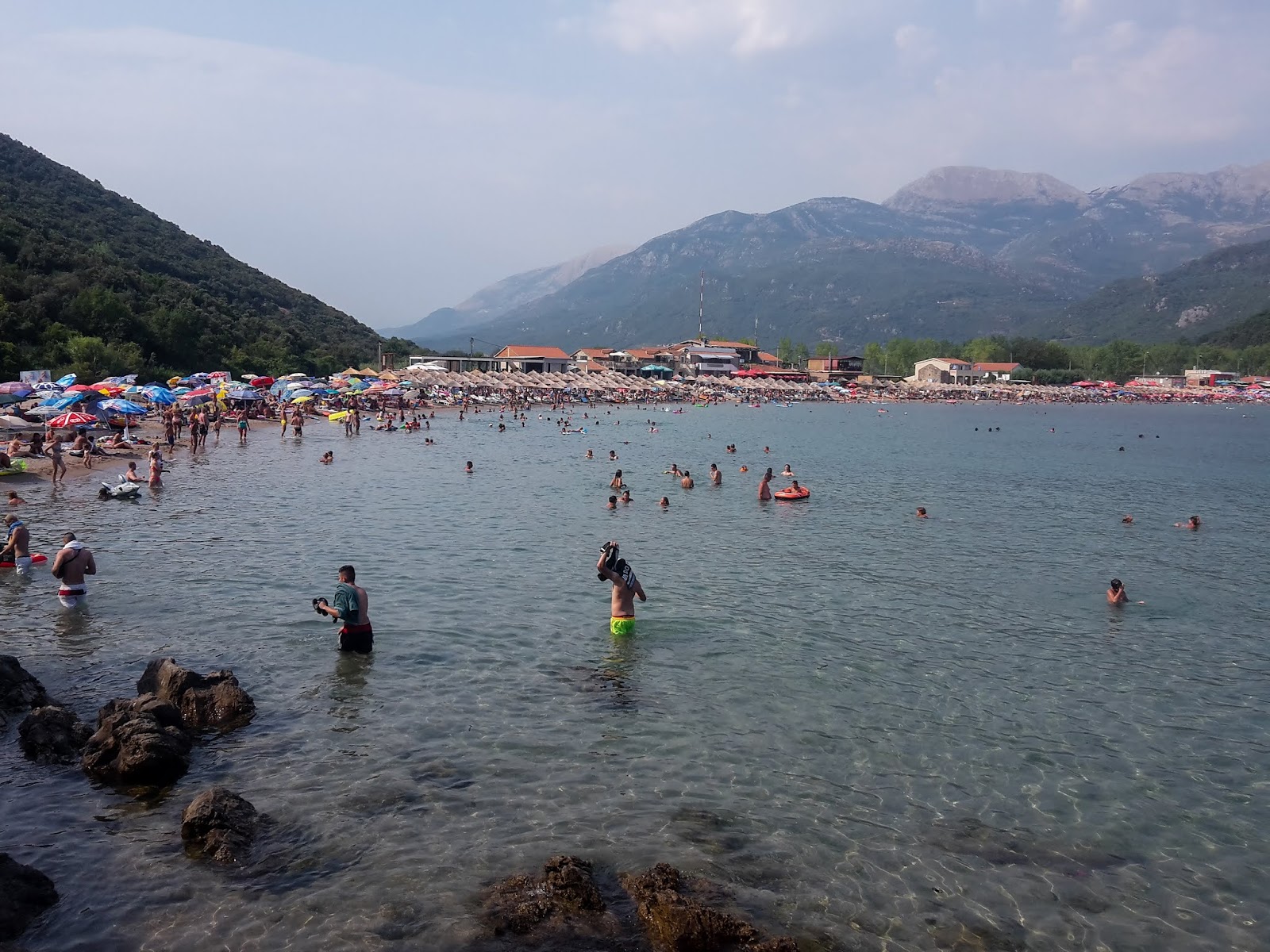 Lots of tourists in Montenegro

The cars also have conversations with each other, usually not very polite ones. The problem is that bicycles can’t reply in this language. After Montenegro, we’re seriously considering getting a hooter on our bicycle! The drivers are so aggressive and dangerous. On the other hand, it is also the country with the most motivating people so far. When we were riding to Bar at night we hit a traffic jam about 10 km long and up a big hill. As we were riding uphill and swerving our way through cars, people were standing next to the side of the road and screaming “Bravo! Bravo!” at us, cheering us on and clapping loudly for us. Simon and I felt like we were in the Tour de France racing to the finish line. All that was missing was them passing water to shake over our heads.

To top it off, we passed a news film crew that was interviewing someone in their car and when we passed they quickly focused the camera onto us. Many people in Montenegro also regularly put their hands out of the window with a thumbs up…. Such. legends. 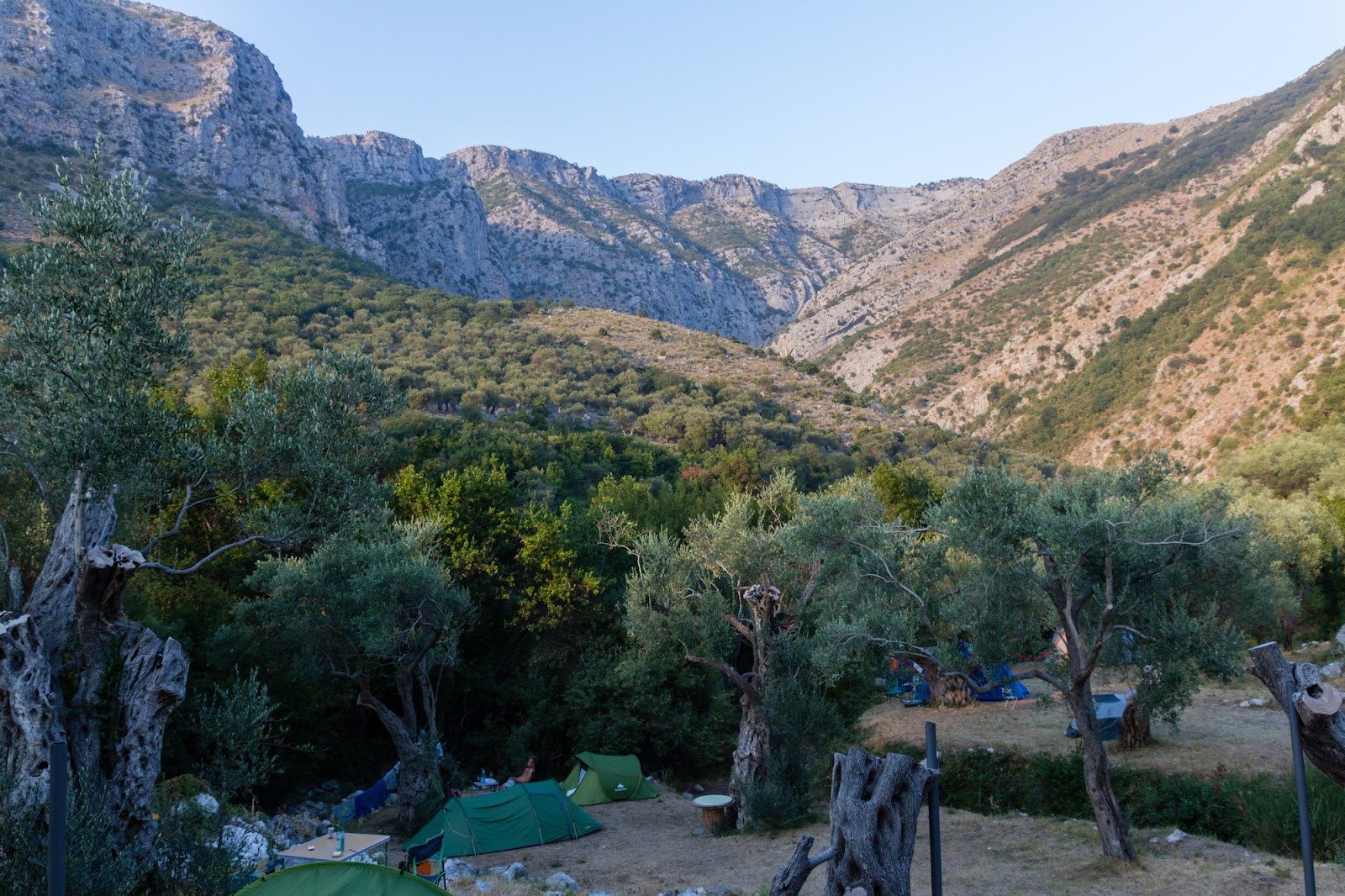 We did our most elevation that day so it was good that the encouraging screams kept us going. When we were 2 km from the campsite, we thought it was nearly over. Unfortunately we had no idea what we had ahead of us. A steep road with 10% – 15% gradient! We were told by Kim and Keir that this campsite was pretty awesome, but they also said that it was a ‘bit steep’ towards the end. What we also didn’t realise is the amount of dogs on this quiet road… we were chased twice in the dark. After all the hills on the Montenegrin coast that day, the traffic jam, those 2 km that were a ‘bit’ steep and the dogs, we needed a shower and a good sleep!

In the morning when we had recovered, we saw how beautiful the campsite (Bartula – Olive Garden) was and the incredible views in front of our tent. It is situated high up looking into a deep valley and canyon. There is also a rock pool in the river we could always hike down to. The pool was deep, ice cold and very refreshing. 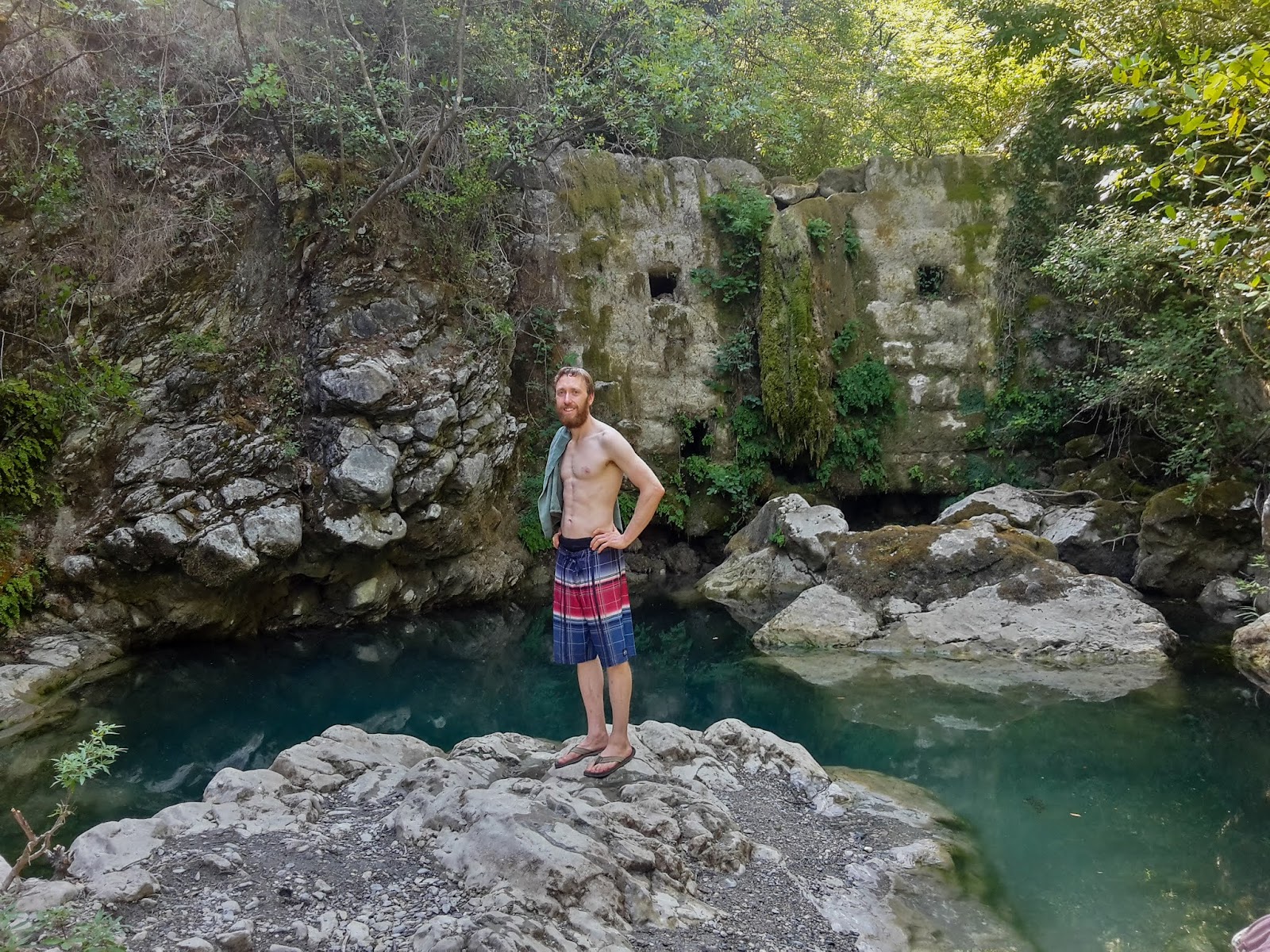 Natural pool of the camp site

There were also a lot of young travellers here and it had a good vibe. We spent a few nights there and met a lot of people (hikers, hitchhikers, short term travellers and the great staff) and shared stories and raki (Balkan schnapps) at the bar.

We headed to Ulcinj from there to meet Simon’s parents who flew down for a holiday. It was so great to see them again and catch up. We also did a lot of sightseeing (with the car) and much needed relaxing on the beach. 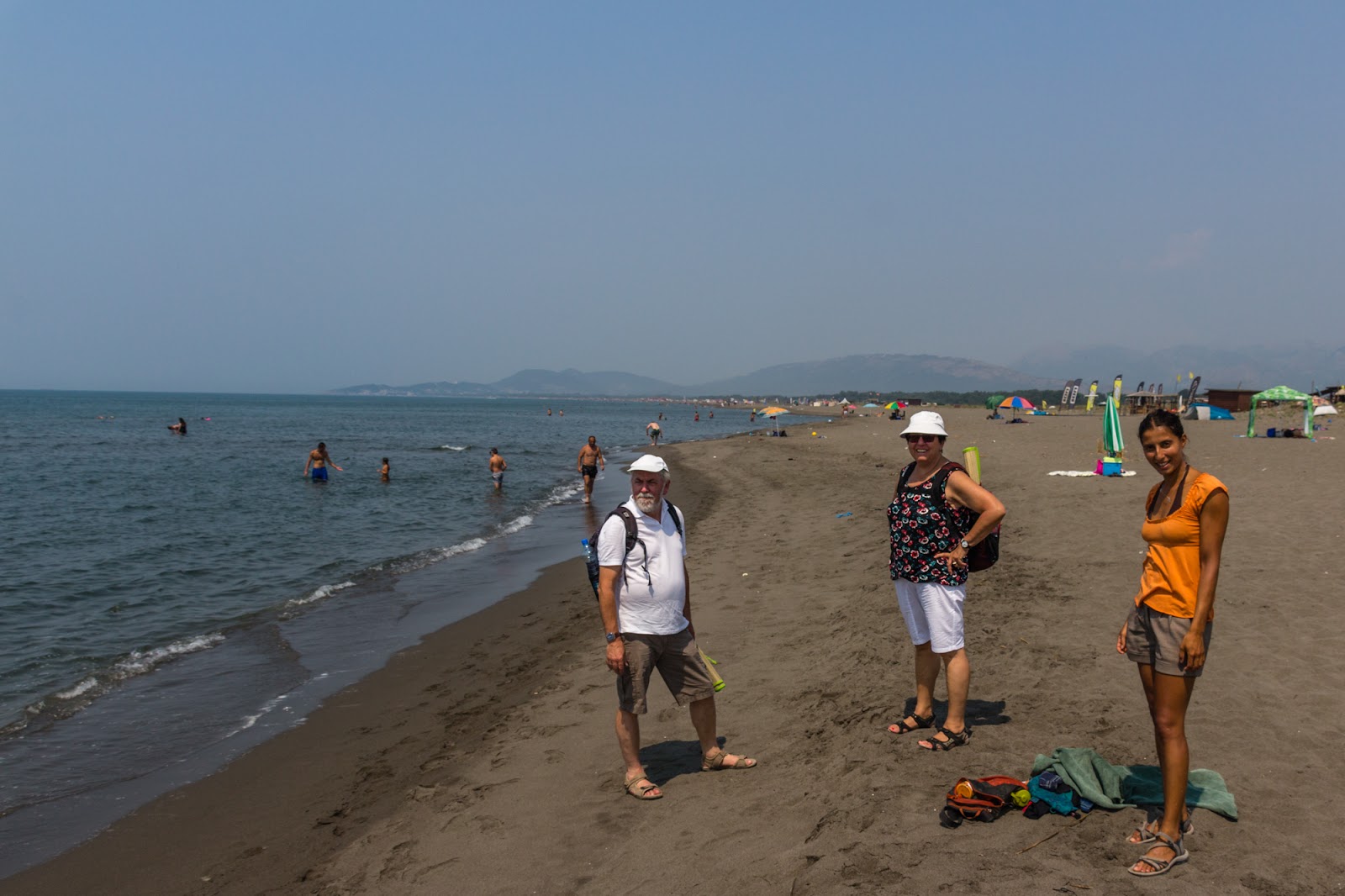 We went to a sandy beach called Ada near the Albanian border and met a very friendly Serbian family. They were super nice and gave us some refuge in their cute, shady hut made out of materials lying around. There was also a very impressive hut on the beach, it read “happiness only real when shared” and so of course, ‘Into the Wild’ being one of Tanya’s favourite books/movies, we had to take a closer look. It had a double bed with an open roof on top overlooking the sea, a wooden caravan underneath with a full kitchen and bar stools around… there was also an outside living room and a guest tent. Too bad we didn’t get a chance to chat with the person who lived here. 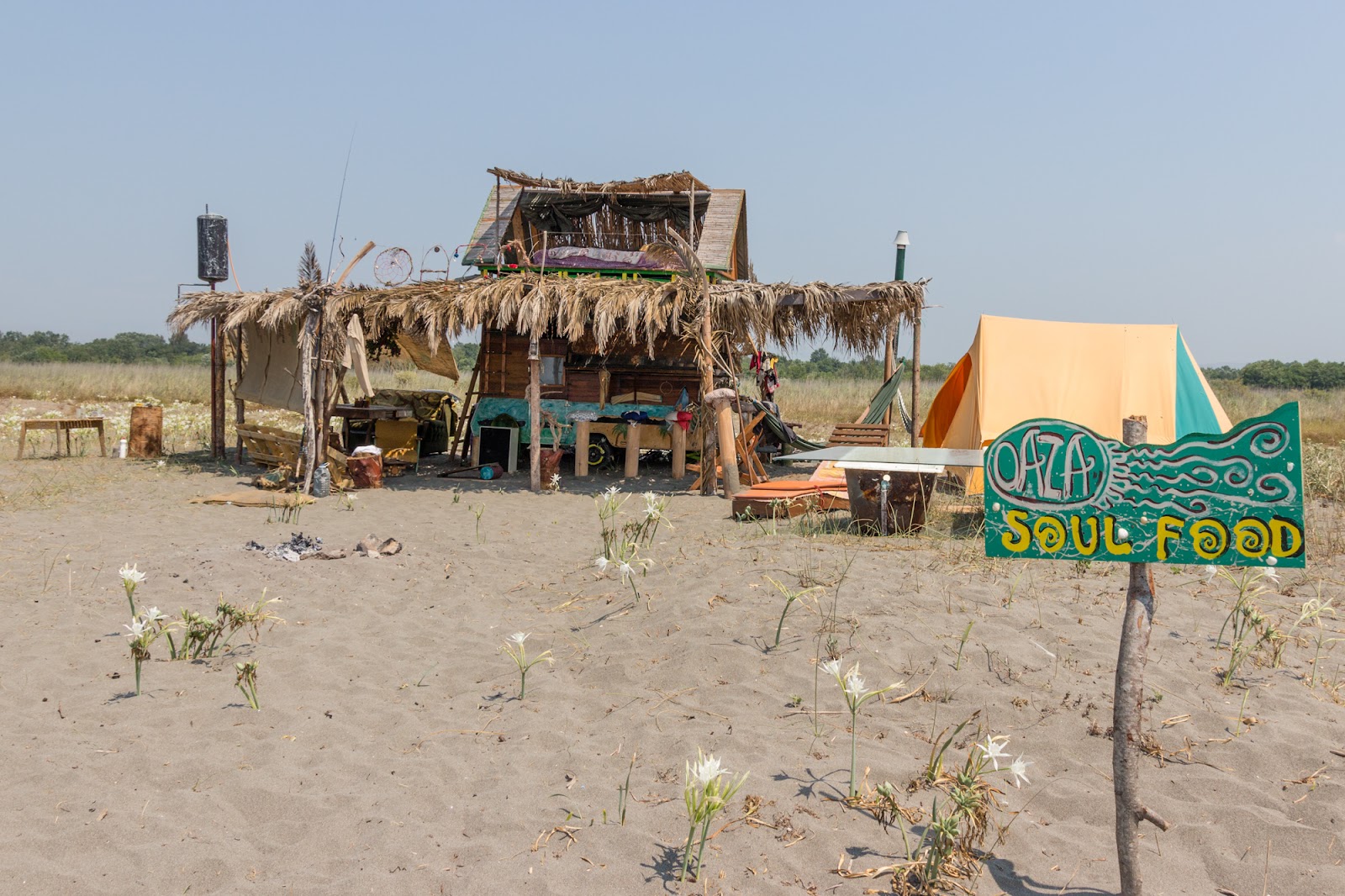 Beautiful Hippie houses on the beach

We also visited Bar Old Town a couple of times and enjoyed an outstanding meal at the restaurant ‘Kladrma’. We had rice stuffed paprika, aubergine with garlic, a delicious spicy tomato sauce, stuffed and rolled grape leaves, risotto and their home made sour cherry juice. We also enjoyed the most delicious Baklava we have ever tasted at another cafe close by. It’s easy to understand why a lot of people come into the Old Town for dinner as the good mood reflected the good food. 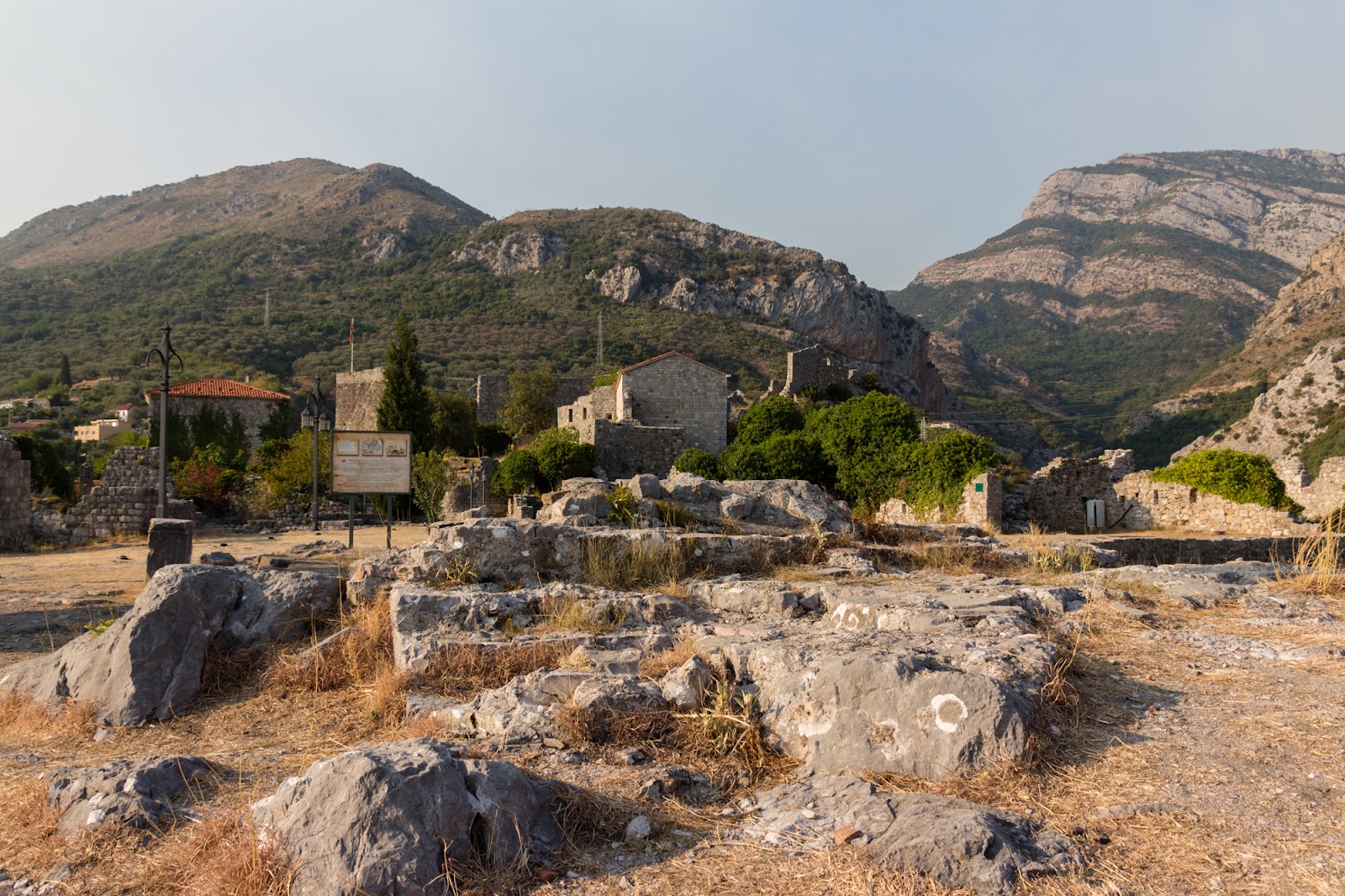 The ruins of Stari Bar

The next day we went back to Kotor Bay to enjoy the nice views with Hans and Ingrid. We took the back road because of the traffic and wow – Montenegro is incredibly beautiful once you leave the coast. We took a small mountain road and were spoilt with the views. Except for one city, Cetinj, there were no towns – just mountains, trees and nature. In the inner Bay, we took a boat to the inner man made island and visited the Old Town of Kotor. We also walked the impressive and steep wall, built on the mountain, which lead to an old ruin at the top. 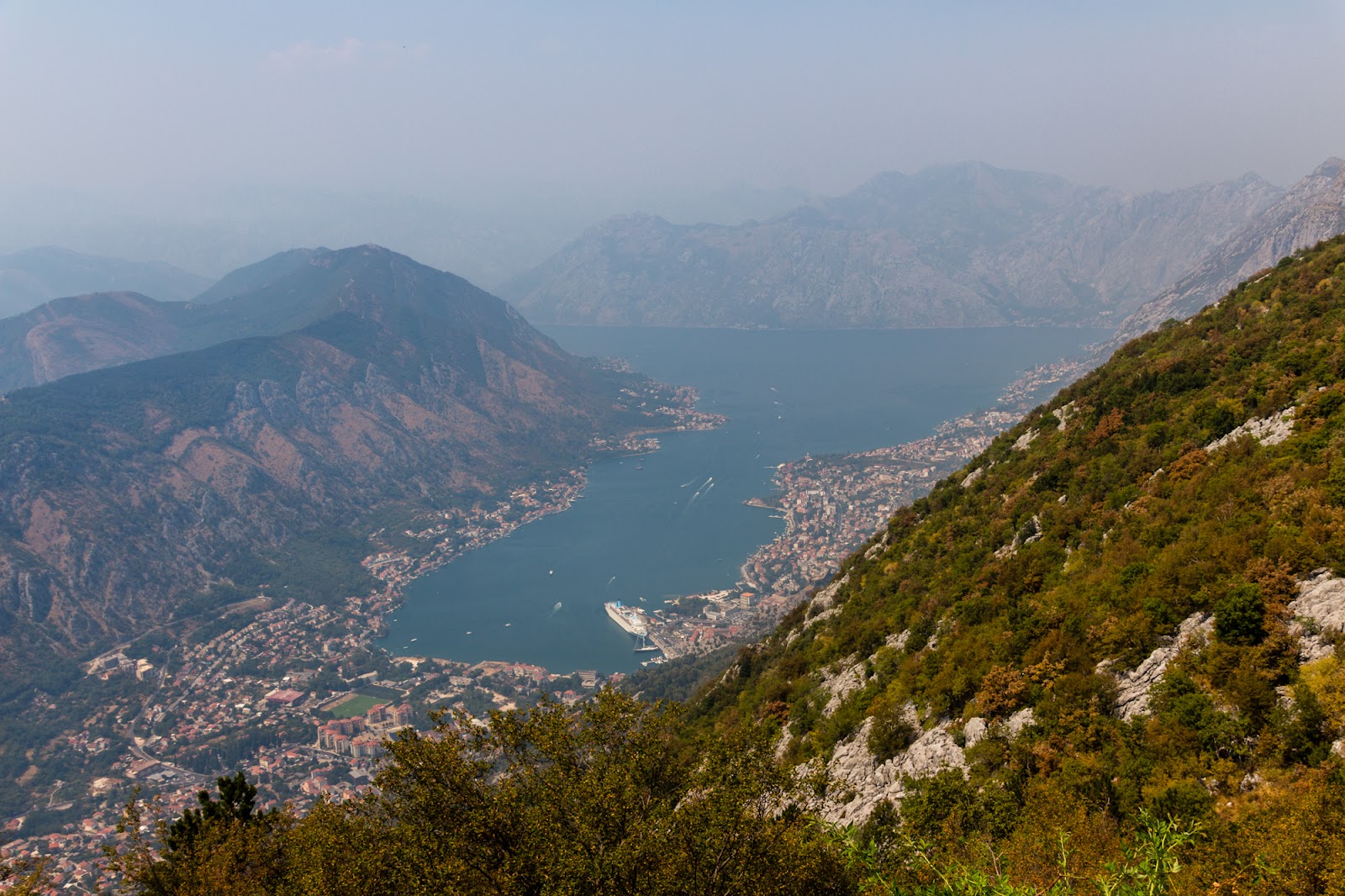 View from the top down to the Bay of Kotor

One of our best experiences in Montenegro and one of the highlights of our trip was Lake Skadar. As soon as we left the coast and went inland again the landscape changed suddenly and the tourists disappeared. It was like entering another world when we came over the mountain pass near the Albanian border and saw Lake Skadar. 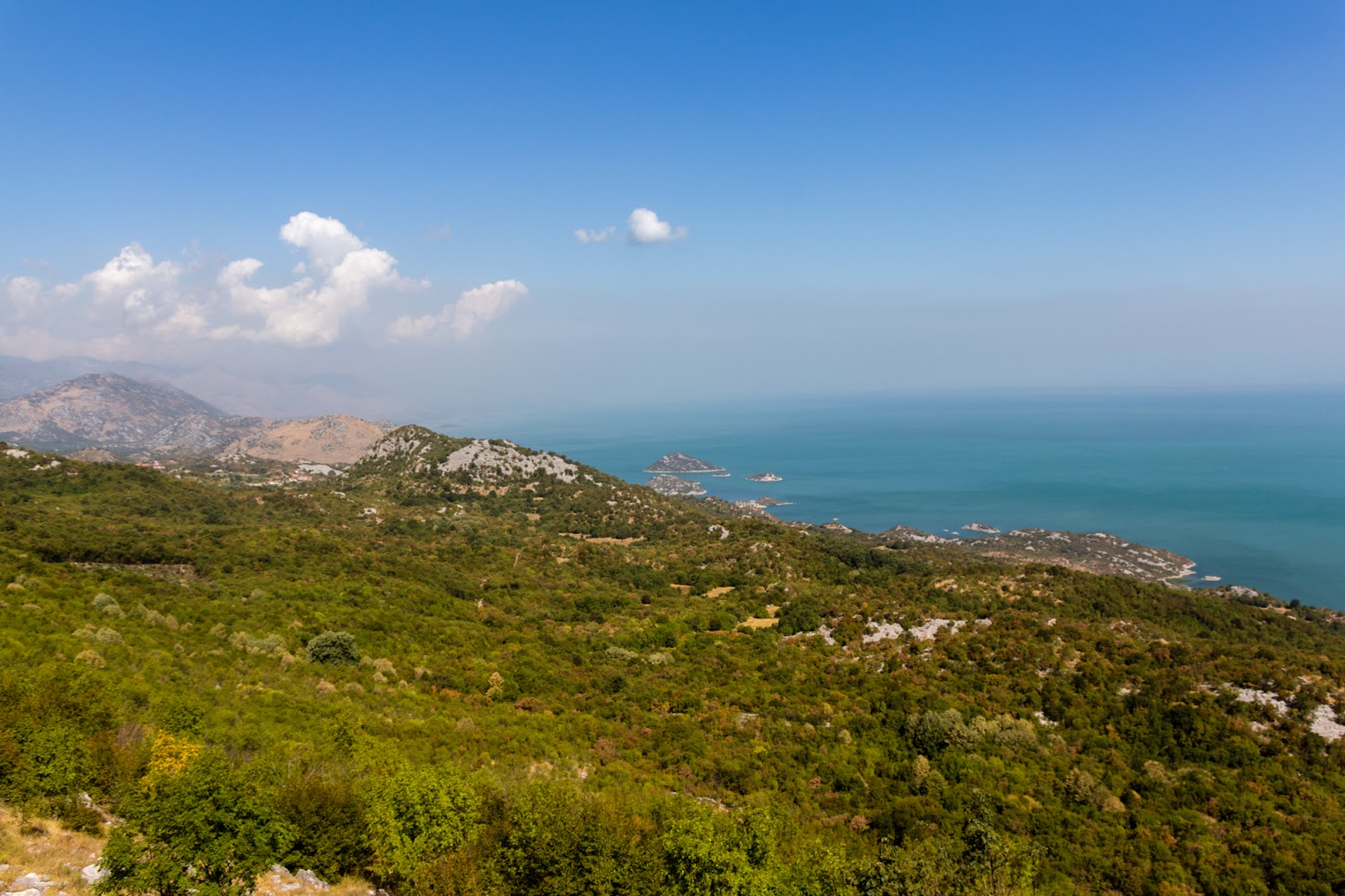 The beauty of this Lake and the surrounding mountains is pretty hard to describe and also, like many things, hard to capture its entire beauty on a photograph. High mountains surround the grand lake with only a fraction of them visible due to the vast size of the lake. Small drops of wild islands spread over the water. What kept the beauty of this specific part of the lake was the fact it wasn’t overcrowded and we could fully take in the moment. 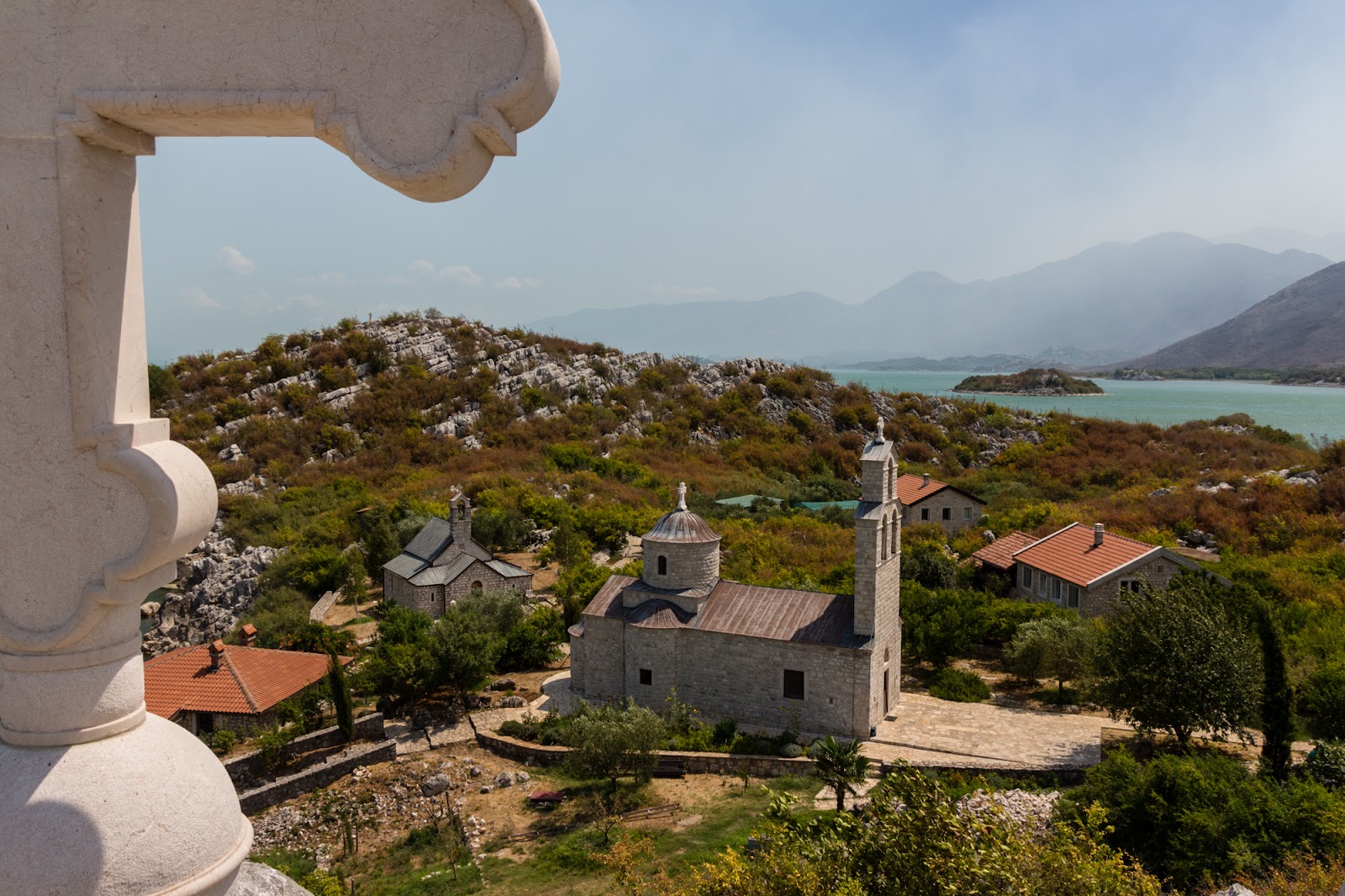 We took a small boat over to the closest island where there is a monastery and a nice young nun showed us around. She also gave us homemade mint and pear juice (which was delicious!) and we chatted about life on the island. There are 16 nuns living there together and they grow their own vegetables. They also pick wild pomegranate and other fruits that the island has to offer and have their own boats to get around… she also once got caught in a storm on the way back from another island with a blind nun and others on the boat who could not swim! 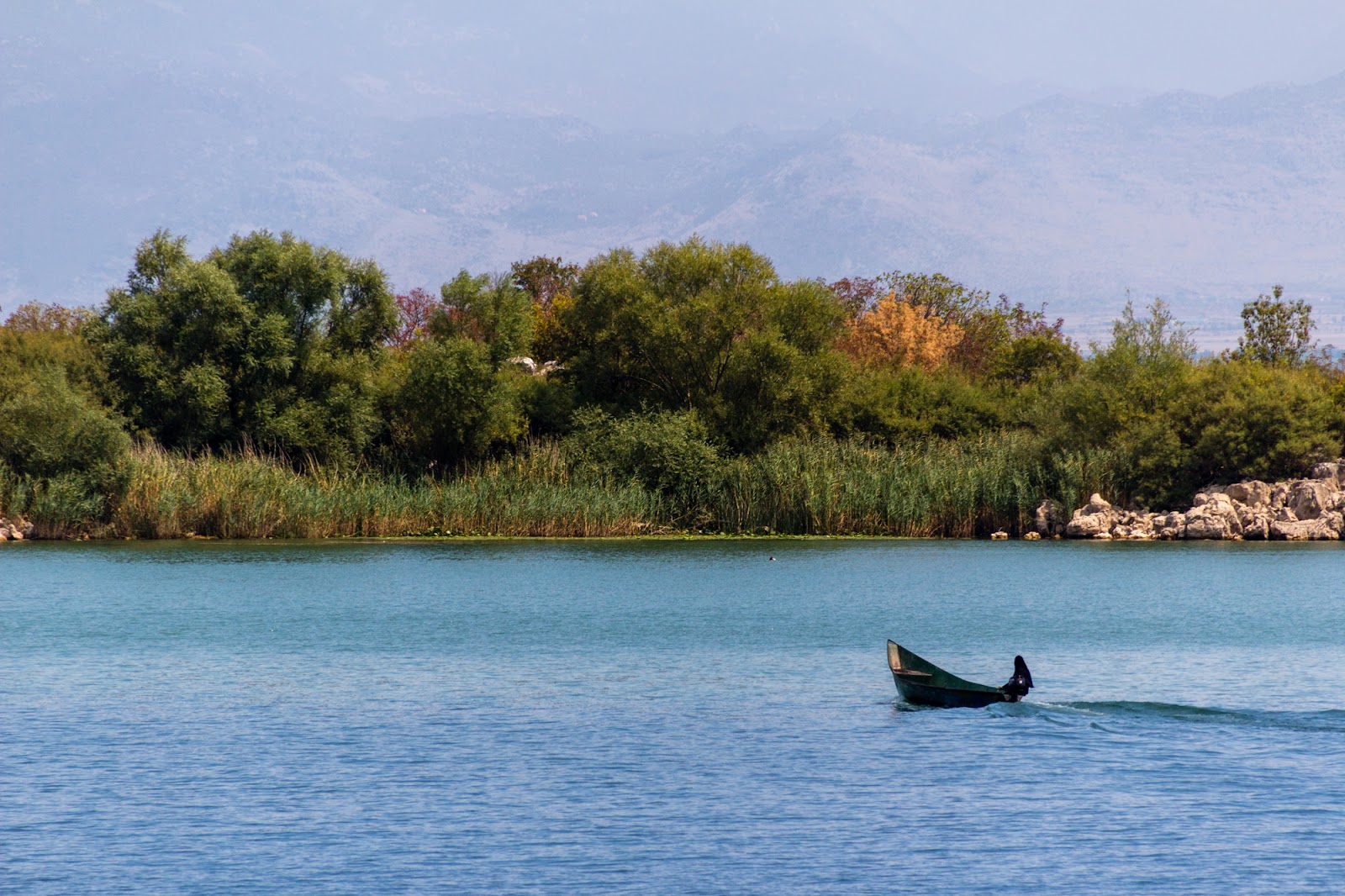 A nun going to the small monastery on the island ‘Ostrvo Beska’.

The next day it was time to get back on the bikes and head into Albania… a country we hardly knew much about and were excited to discover.

One thought on “Montenegro – Bay of Kotor, Lake Skadar and Simon’s Parents Visit”