Left the hotel this morning to find a police car with four policemen waiting to escort us out of the city. The hotel staff must have told them what time we were having breakfast. We obliged but not without some entertainment on the way. First, though, as we were cycling out of the city, a very angry man threw a large stick at another man… It missed its intended target and instead bounced off Simon’s pannier and whacked Tanya hard on the leg.

Our plan was to take the smaller road out of the city as we knew there must be a larger check point on the highway. The police said they would just escort us out of the city so we took our intended route anyway and hoped they would eventually decide to leave us. As soon as we turned to the smaller road they got very animated and pulled us over. Within seconds, a whole group of friendly men around the area surrounded us looking at the map on Simon’s phone and smiling at the situation the police found themselves in. 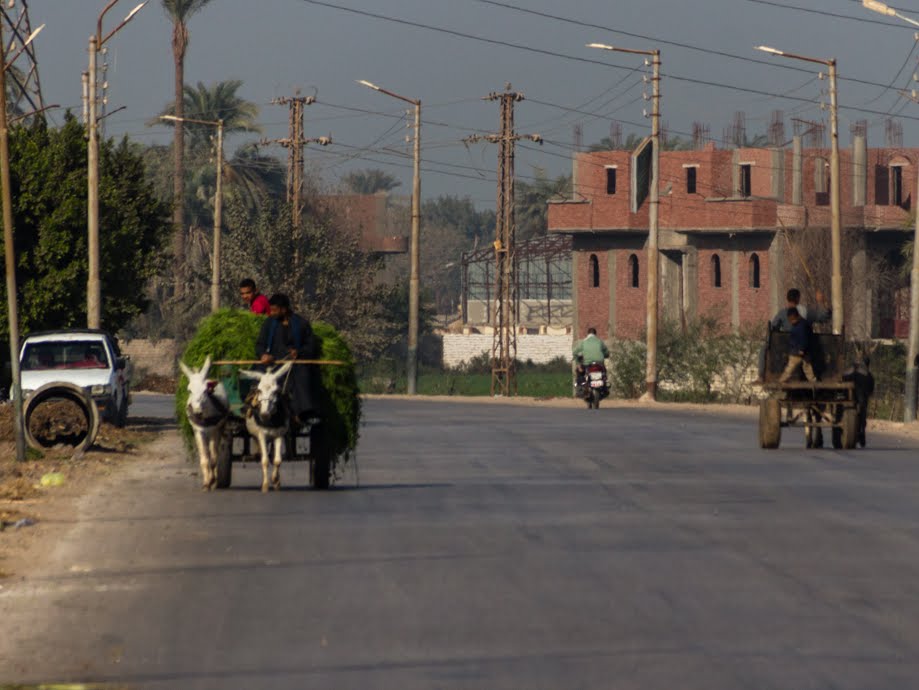 Donkey carts are common in Egypt

The men told us to take the road that we wanted to and just cycle on but the police were starting to almost beg us to turn around. We cycled on for a bit and they pulled us over again, now looking very worried… they started arguing amongst themselves and one of them was nervously pacing and making many phone calls. We have to admit, after all the waiting and escorting the police did the day before, we actually enjoyed this little payback. The men told us that if they let us go then they would go to jail… and we tried to explain to them that we are not criminals.

We realised that this fiasco was just wasting too much time, even if it was a bit of fun for us. We agreed to turn around and they changed escorts near the highway.

The police that escorted us from this point to Dayrout were exceptionally good and we almost felt bad for giving the first city escort a hard time. On this stretch, they kept their distance and drove 100 m behind us. They also didn’t hoot loudly for people to get out the way when driving through the cities like the escorts before had done. We did’t feel pressure to cycle fast and whenever we stopped for a coffee they parked the car far away from the cafe. 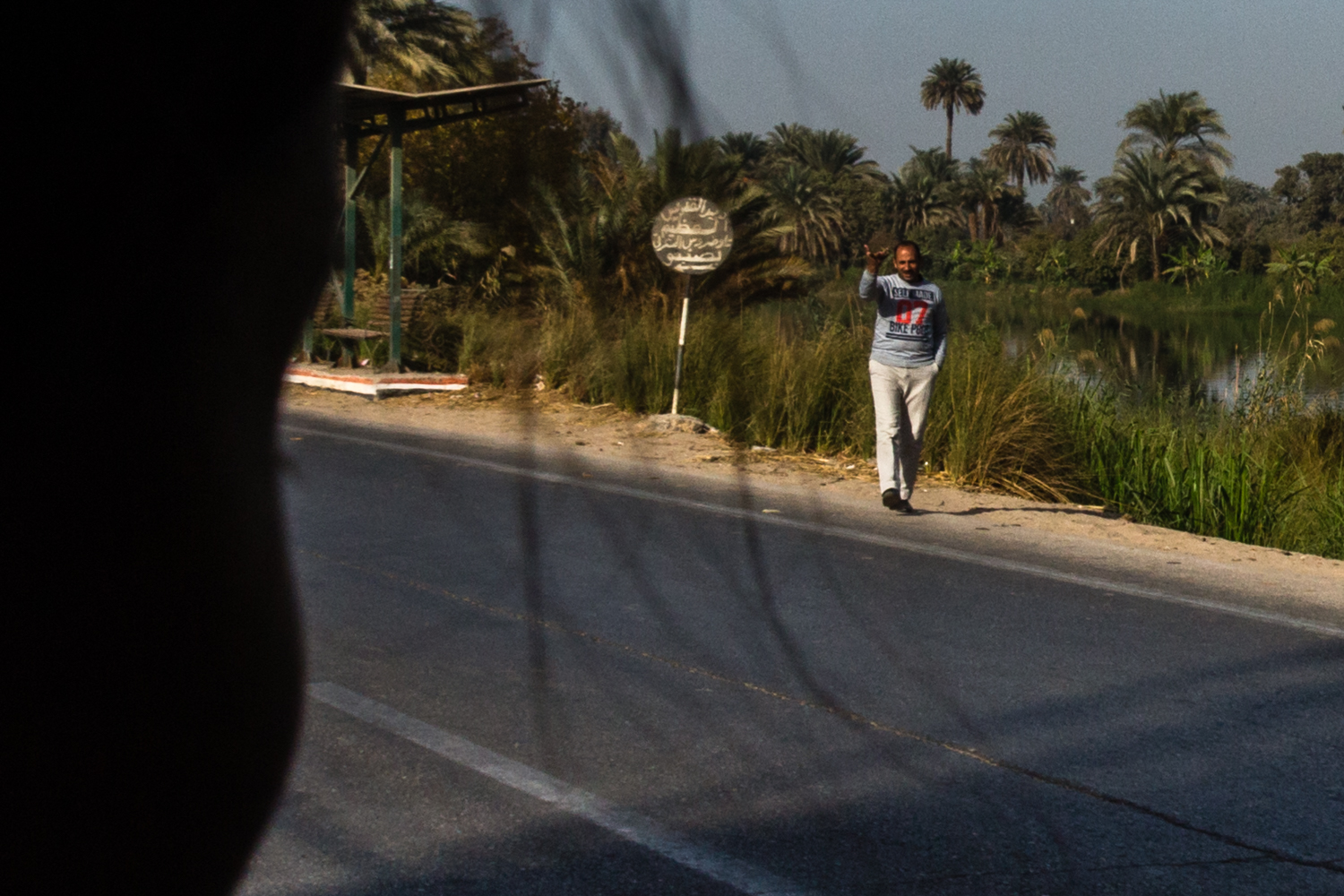 For lunch, the police even recommended an excellent (and cheap) restaurant and they drove on and parked 3 km ahead of us and let us eat in peace. They also did not accept any offers of tea / coffee from us but thanked us anyway.

The police sometimes get a bad reputation but we have to say that 95% of the police we have dealt with in Egypt have been very friendly to us. When we finally got to Dayrout, they made us tea while we waited for our next escort to show up.

The tea and a break was definitely needed, as today Simon also had his first accident! The traffic in one town was hectic, as usual, and he tried to swerve out of the way of a tuk tuk… what he didn’t see was that the floor was wet. His back wheel slid out and he flew over the handlebar and belly flopped onto the ground, where he laid completely still for several moments. Many people immediately helped us, taking the bike to the side and checking on Simon, who was now covered in mud. Ironically, just moments before, he was thinking about how nice and clean his pants were. 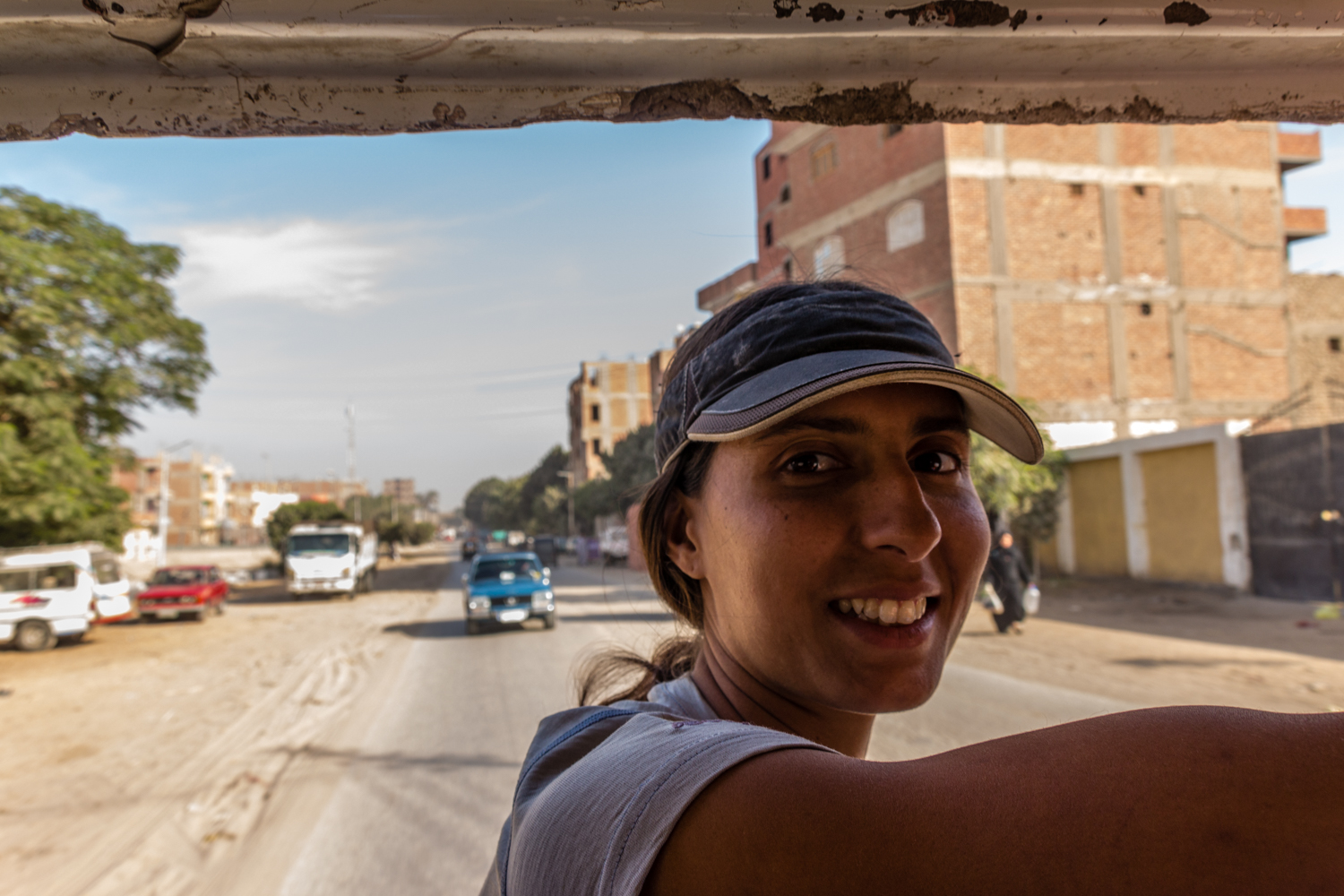 Taking a ride with our police escort

At Dayrout, we realised the hotel we had called the day before had registered a wrong address on google. There is NO hotel in Dayrout. We also didn’t plan enough time to cycle to the next big town, Asuit, before sunset (4:30pm). Luckily, the police offered to drive us there in their van. Since we could not ride around in the town to ask people to stay with them while a police escort was with us… we did not really have another choice but to accept this offer. Over the next 60 km, we had four escorts and reloaded the bikes and gear into a different van every 15 km. It was a bumpy, uncomfortable ride but we (and the police) were very glad to get to Asuit as fast as possible.

Riding in the police van with a few guns bumping around in the back at every speed bump was also an experience itself. At one point, while changing vans, a policeman handed a teenage boy his gun to hold while he helped with the bags. That was a bit concerning for us but seemed quite normal to everyone else.

We are now in Asuit, had a 2 EUR dinner and coffee at the Nile. Very tired and ready for bed! For more photos from Egypt, see here.