We decided to take a train or bus from Sohag to Qena because the enjoyment of cycling in Egypt and interacting with the people was lost when the police started accompanying us… even though the police themselves have been mostly nice. Since then we have been racing between towns. As the next trains only left at 3pm, we cycled to the bus station where we could get a long distance taxi. Just as Tanya turned into the bus station, she got a massive puncture and the air blew out of her tires fast. We have only just arrived in Africa and Tanya already has a broken rim and a large puncture through her ‘puncture proof’ tires. What happened is that because of the flattened rim, the break pads pinched the new expensive tire, ripping the side of it. 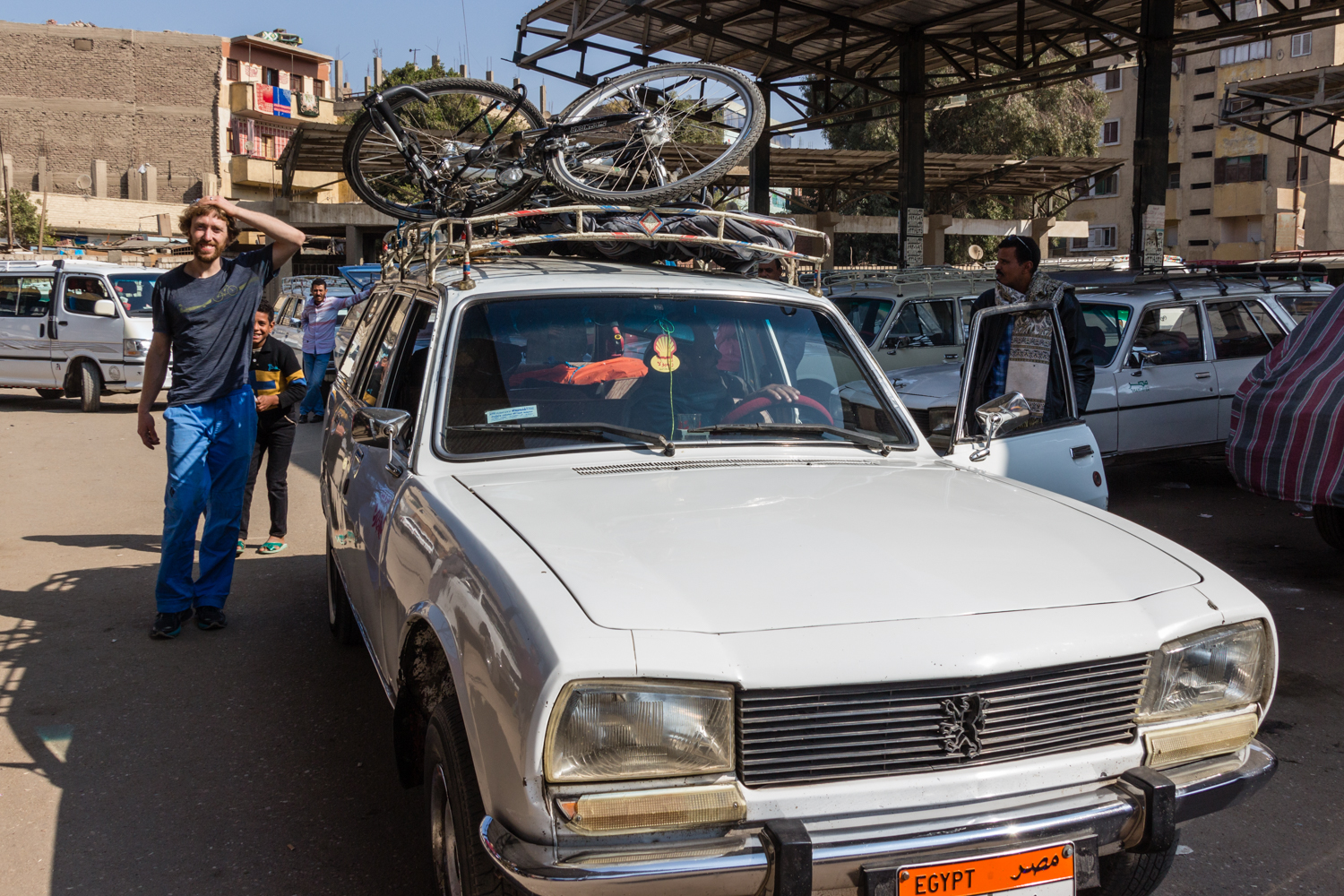 Taking a long distance taxi to from Sohag to Qena

The highway on the east side was absolutely stunning, with the river and green farmland to our right and a desert mountain range to our left. Although Qena is only 150 km away from Sohag, it took us over 4 hours to get here with a taxi. We took public transport but the police still drove behind us. There were many checkpoints and roadblocks along the way where they routinely stopped us – our poor taxi driver didn’t know what he was getting himself into. One checkpoint made us wait 40 minutes. Their catch phrase and hand signal for ‘one minute’ is really getting on Simon’s nerves now… this can mean anything from 5 minutes to 1 hour.

Tanya managed to speak to a ‘ 3 star’ general today who spoke some English and asked him why the police are following us. He said that it is for our convenience so that the language and finding our way is easier… that might make sense if the police even spoke our language! He didn’t like it when she told him our life has been more difficult with the police around and he started asking her questions such as “where have you been in Egypt?” and “what is your purpose here?”. Many of the police say Egypt is very safe and others say that they are afraid we would be taken as hostages. Who knows what the real reasons behind the convoys are? The landscape on this stretch was pretty

Eventually we arrived in Qena and went out for dinner to a fancy restaurant with delicious food, especially their spicy baked aubergine and tahini sauce. When we arrived, a friendly man sitting at the table next to us introduced himself and welcomed us to Egypt. We chatted for a few minutes and then he asked us if he could ‘invite us’ for chicken. When we told him we don’t eat meat, he asked us if he could invite us for fish. Eventually, he gave up and with a disappointed tone said, “okay, I’ll invite you for vegetables.” He actually paid for our entire meal that was on the table! It is so humbling when people do such kind things like this for us – strangers – and we feel the hospitality in Egypt has gone above and beyond what we expected. He made our day much better and lifted our spirits.