Cycling the Sahara desert, I remembered back to the time I thought this would be one of the toughest stretches of our trip to date. The heat, exhaustion, no food, no water. How to survive? Plan well, or you won’t planning much more again, I thought. But now, the wind was at my back and I glanced over to the speedometer: 32 km/h. For one of the most desolate terrains on the planet, it did not feel that hard.

We had finally left Egypt and went into The Sudan! When we told people before our trip that we will cycle through Sudan, they looked at us as if we had a screw lose (well, we probably do). “Sudan?!”, they would say with a puzzled look of dismay on their faces. Sudan seems to have quite the reputation. After a referendum, South Sudan became independent from Sudan in 2011, and in 2013 civil war broke out. South Sudan is one of the saddest places to be in the world right now. There is also still fighting in the west of Sudan. However, the rest of Sudan is completely fine, untouched by the civil war and life goes on as normal. It is actually one of the safest countries we have ever visited. 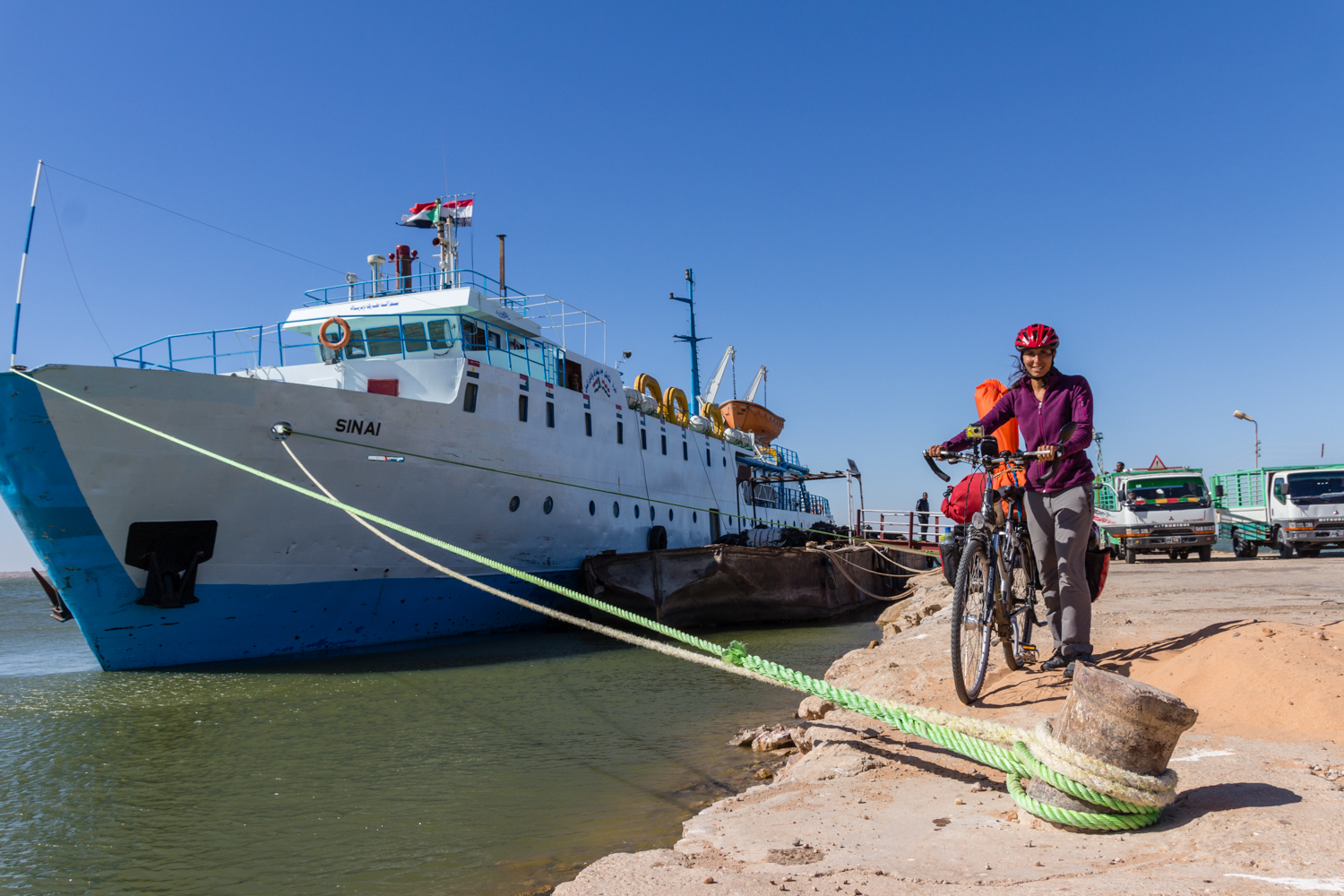 Arriving in Wadi Halfa with the ferry

We took the once-a-week ferry with Daniel, a fellow cycle tourist also riding to South Africa. We packed all of our stuff in a cabin and enjoyed the friendly atmosphere on the boat. We got to catch a glimpse of Abu Simbel at the same time as morning prayer. Daniel unfortunately missed it since a group of men accidentally rolled a carpet onto his legs and were praying over him. 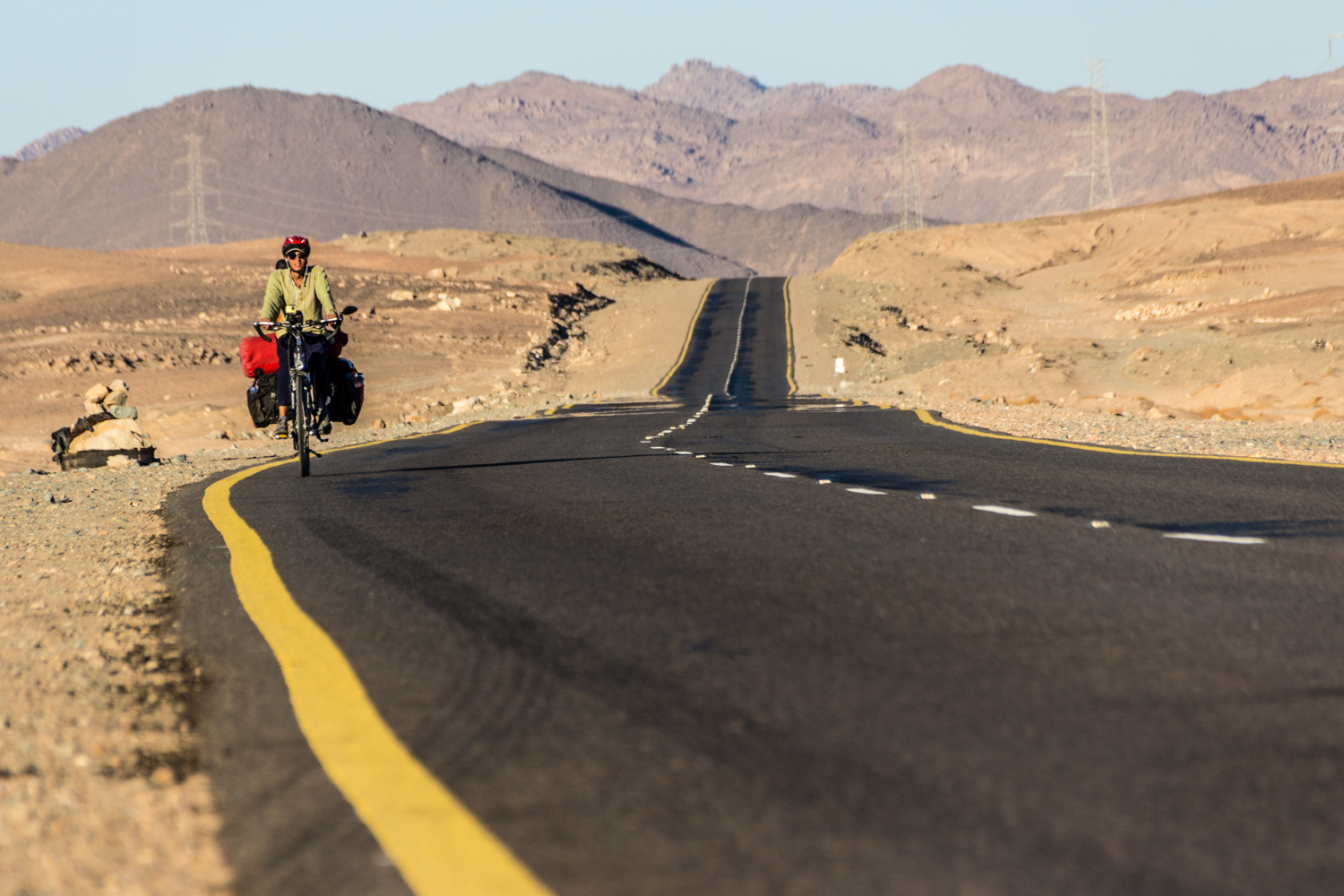 After landing at Wadi Halfa, we ate at a friendly cafe. Many people were immediately interested in us and we noticed that some Sudanese have the most subtly stunning eyes – black with a grayish tinge. Their eyes always look like they are smiling, even if their mouths are not. 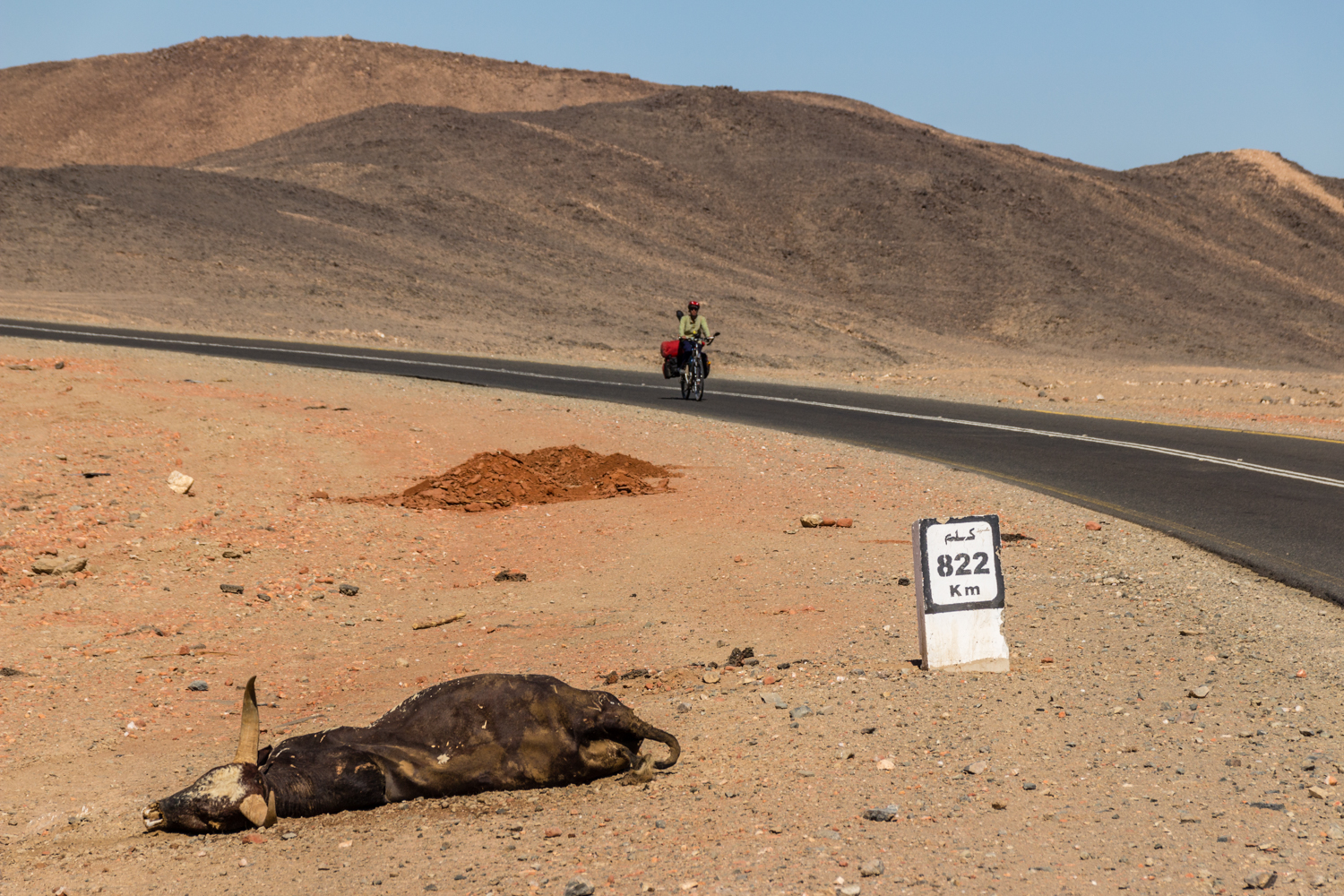 A lot of dead cows

The unofficial exchange rate was good: 1 USD to 30 SDG. We exchanged most of our money on the black market… in other words right in front of the ferry ticket office and police in Aswan. This rate sky rocketed a couple of weeks later to 1:50… We’re rich! As a foreigner, you cannot use ATMs in Sudan because of international sanctions, so we had to carry around a small fortune with us. This wasn’t so easy though – Sudan’s maximum note is 50 SDG – so we had a massive pile of cash that we could barely shove into our pockets. 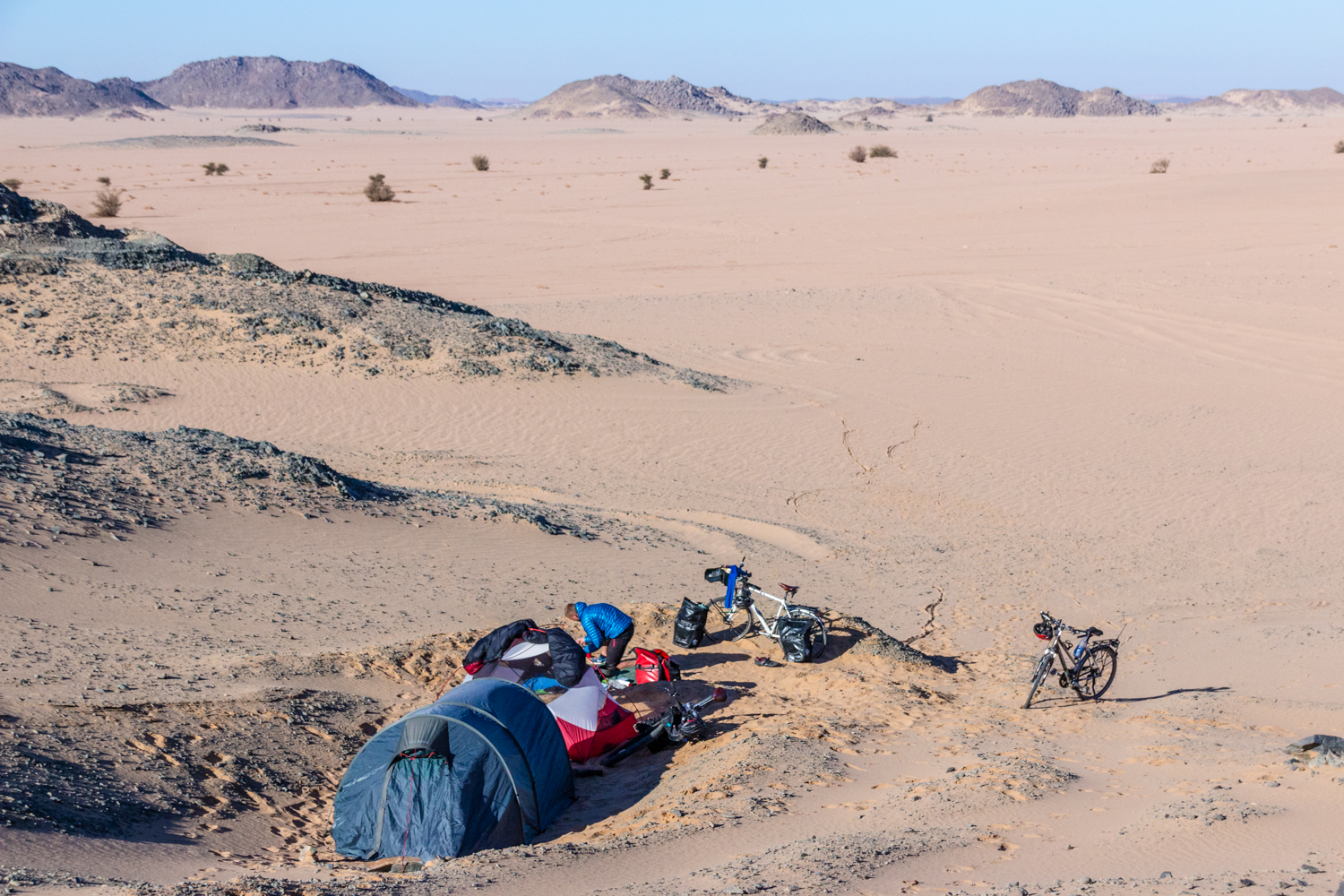 Wild camping in the desert

All three of us set off into Sudan, cycling the Sahara Desert together and away from the Nile. We spent the first night in the desert and the sky was indescribable, though I’ll try. Close your eyes (after reading) and imagine the sky as a black painted canvas. Imagine many bright, shining, holes poked into that canvas, so many that the constellations disappear and you are left with a seemingly endless amount of tiny torches shining down on you.

The only things separating the array of lights is our galaxy, the Milky Way, and the gigantic glow of the Zodiacal light. The light is produced from dust particles in our solar system. Laying down, looking up and seeing nothing else but black and white, hearing nothing else but the sound of silence, we were completely content. If nothing else great happens on this trip, then just for this, it was worth it! 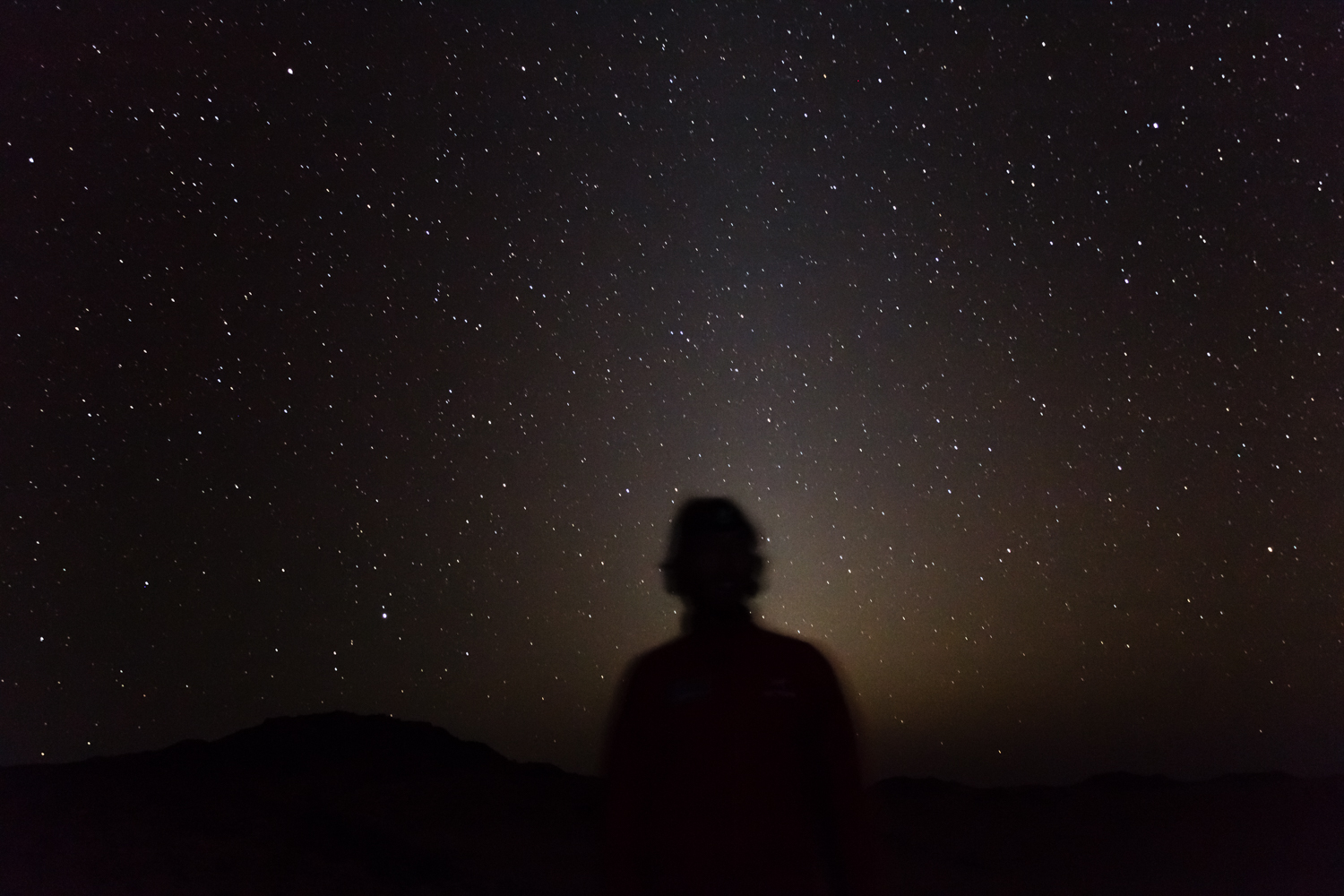 We were lucky to spend our first night in the desert at new moon. Both of us had never seen the Zodiacal Light before and here, in the desert, undisturbed by the moon, it was much brighter than the Milky Way.

The next morning we said goodbye to Daniel and enjoyed the strong north wind, cruising at 30-40 km/h. What we saw was simply stunning, beautiful, exquisite. Insert whatever word you want, as long as it’s along the lines of pretty damn amazing. It is not, however, full of sand. We’ve been lied to! There are mountains everywhere in the desert and the rock and landscape changed many times within a day. From table mountain lookalikes and old volcanoes to sharp jagged black rock, round grey boulders and sand dunes. At one point, the sandy mountains in the distance tricked us into seeing a mirage of a large lake in front of it. The desert has it all, it seems. 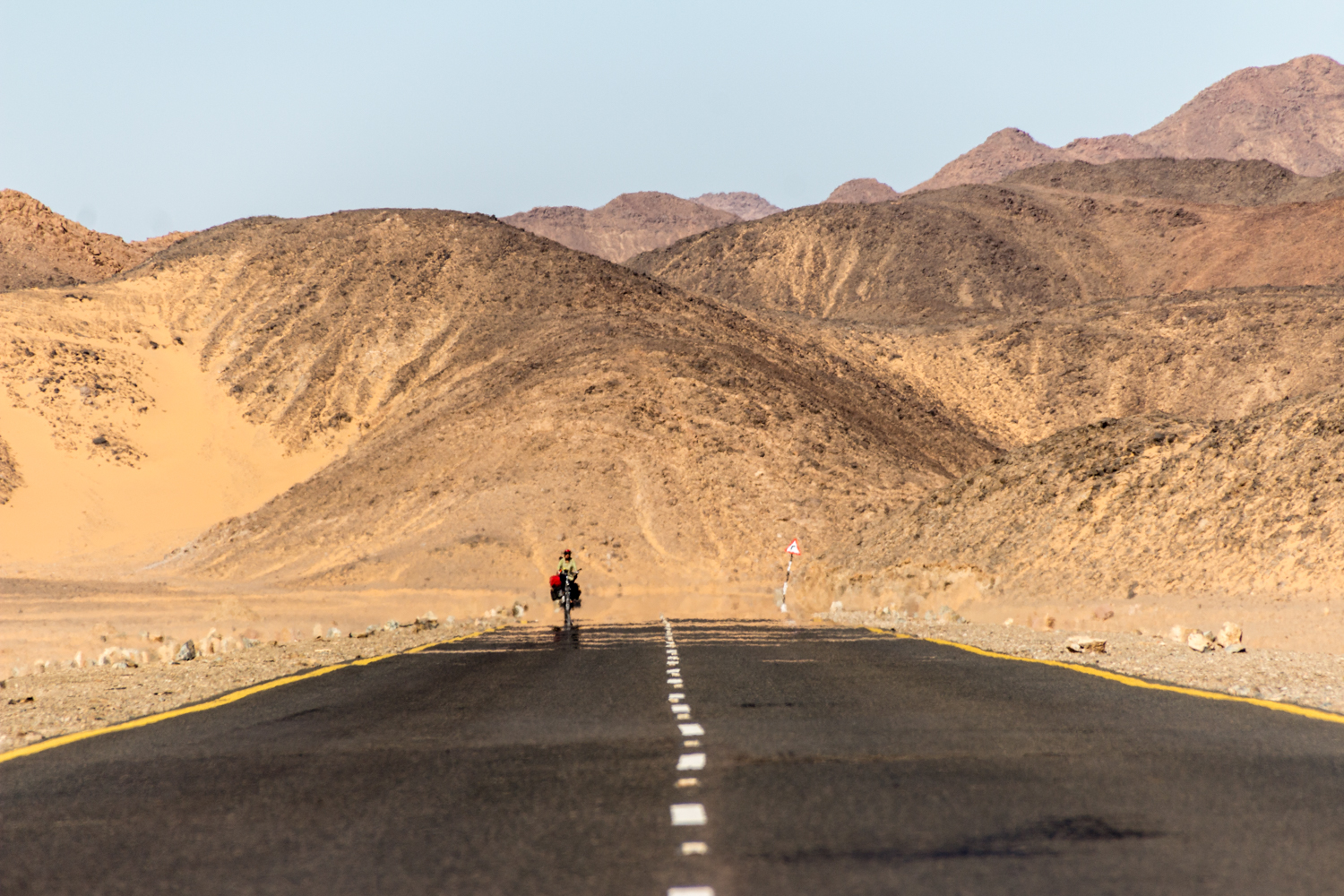 We stopped at a cafe and a friendly family immediately greeted us. The elderly man, who looked over 100, insisted on paying. Then they all hopped on the ferry over the Nile. I enjoyed my free cup of the delicious local coffee that we have grown to love – Jabana. In homes, they prepare it from scratch. They roast the coffee beans, grind it by hand and add it to a pot along with cardamom, cloves, cinnamon sticks and ginger.

Karkade (hibiscus tea) is another local drink and my favourite. You can also find it served cold along with Tabaldi and Aradeep, two other sour but delicious drinks. 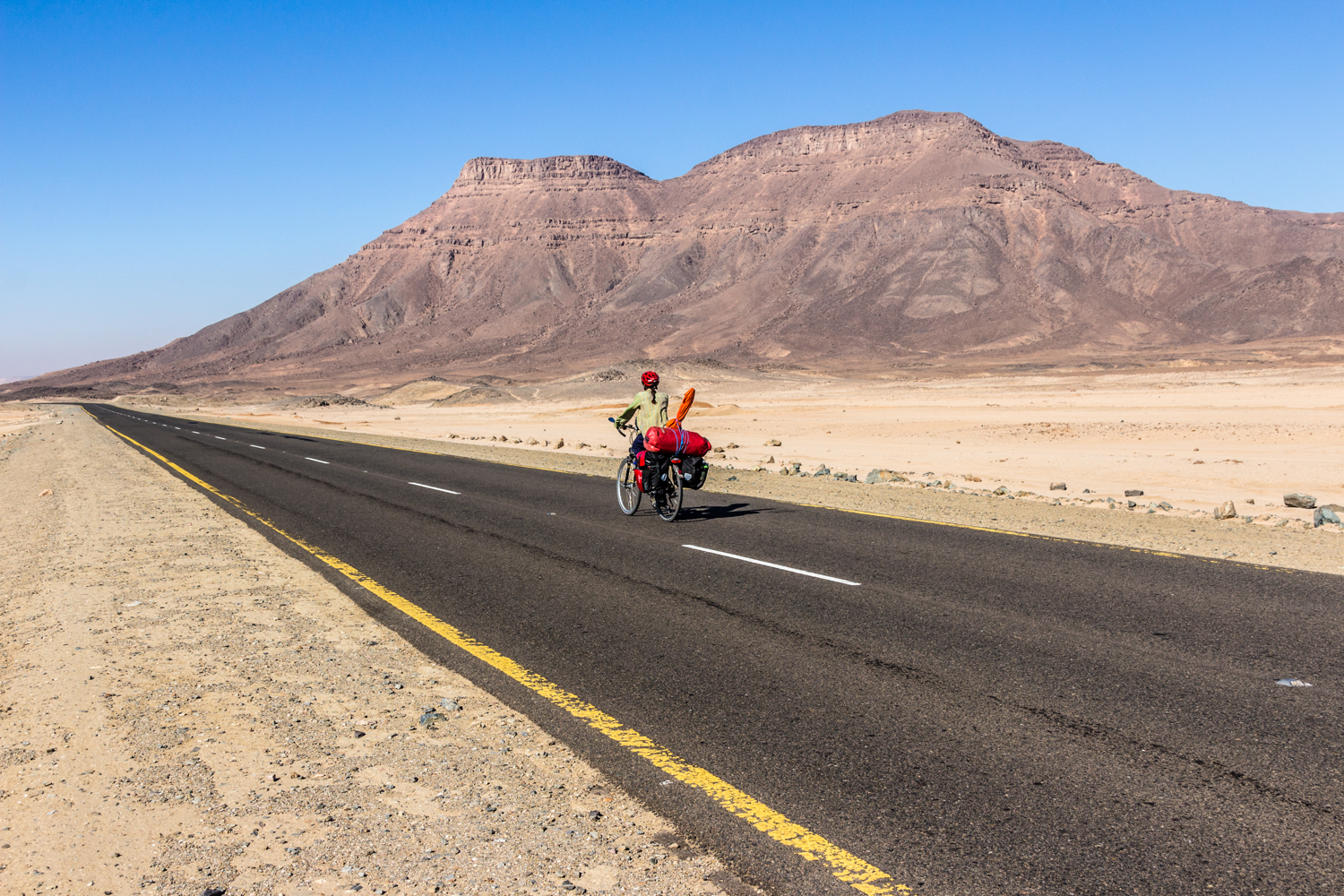 A lot of mountains cycling the Sahara desert

We had to fill up on water at the cafe but the only water available in the clay pots was directly from the Nile! That is what a lot of people drink here. The water (if you’re lucky – ground water) stands in clay pots and everyone uses the same cup to dip in and drink from. Fortunately, we have two filters with us, one coal and one UV filter. We pumped through the Nile water and it came out much clearer, although it still had a sweet taste. Unfortunately, we also clogged up our filter and after a few more uses it broke! 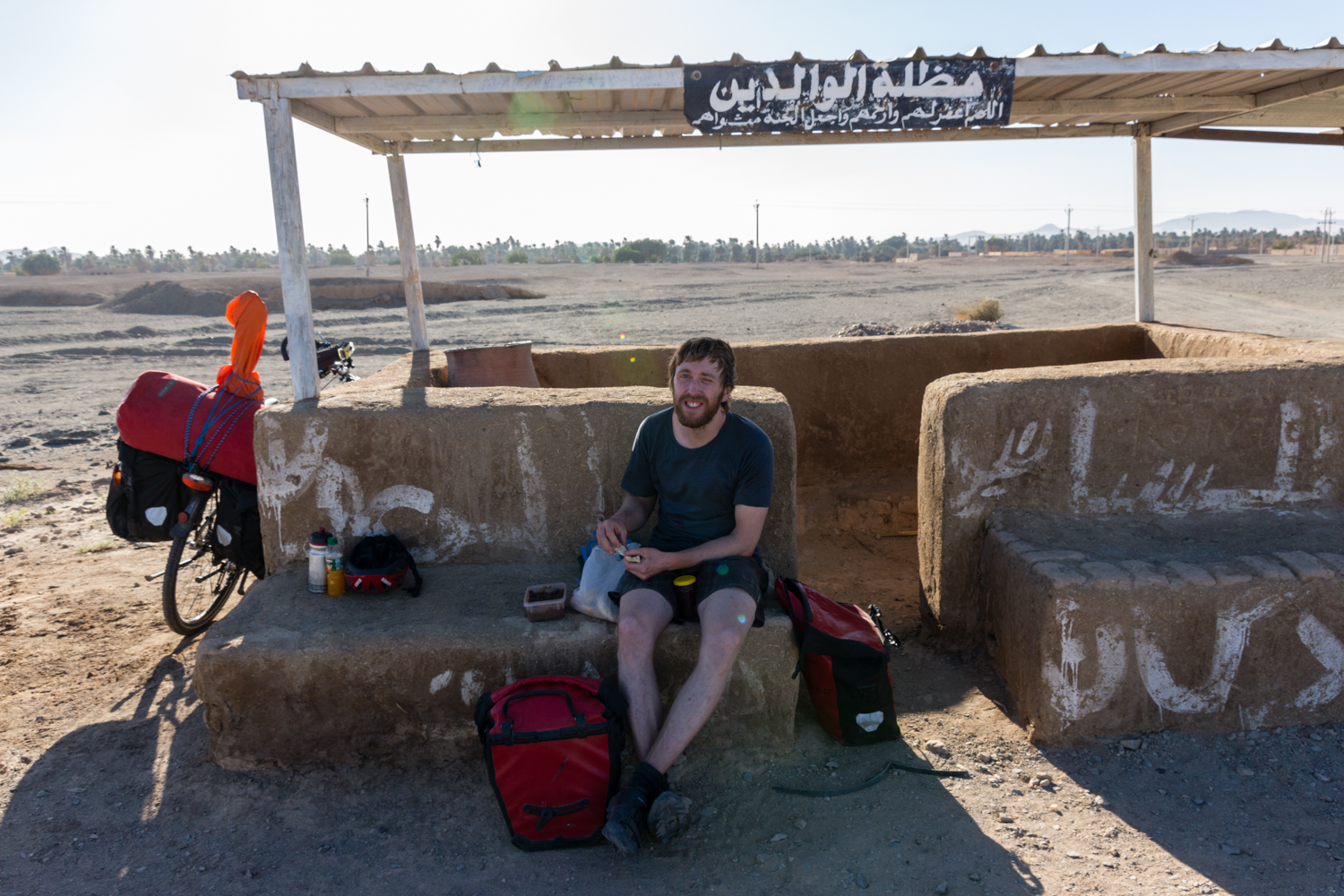 Taking a break from

Doing 100 km a day without much effort thanks to the Wind Gods, we reached Dongola soon, where we had an amazing two days. We said hello to the desert and now it is time to meet the people. For more photos of cycling the Sahara Desert and from Sudan, see here.

One thought on “Cycling the Sahara Desert (Sudan #1)”