Croatia Part 5 – From Split to Montenegro

After Split, we headed back south. On the way, Tanya got her third flat tire of the trip and after a quick fix, we were back on the road and cycled passed the campsite in Omis where we found Mrs. Hook (see last blog post). Cyclig on from here, we had a long stretch of coastline where we couldn’t find a place to wild camp and the campsites were completely full. Luckily, a friendly man allowed us to camp on a campsite parking lot for free. 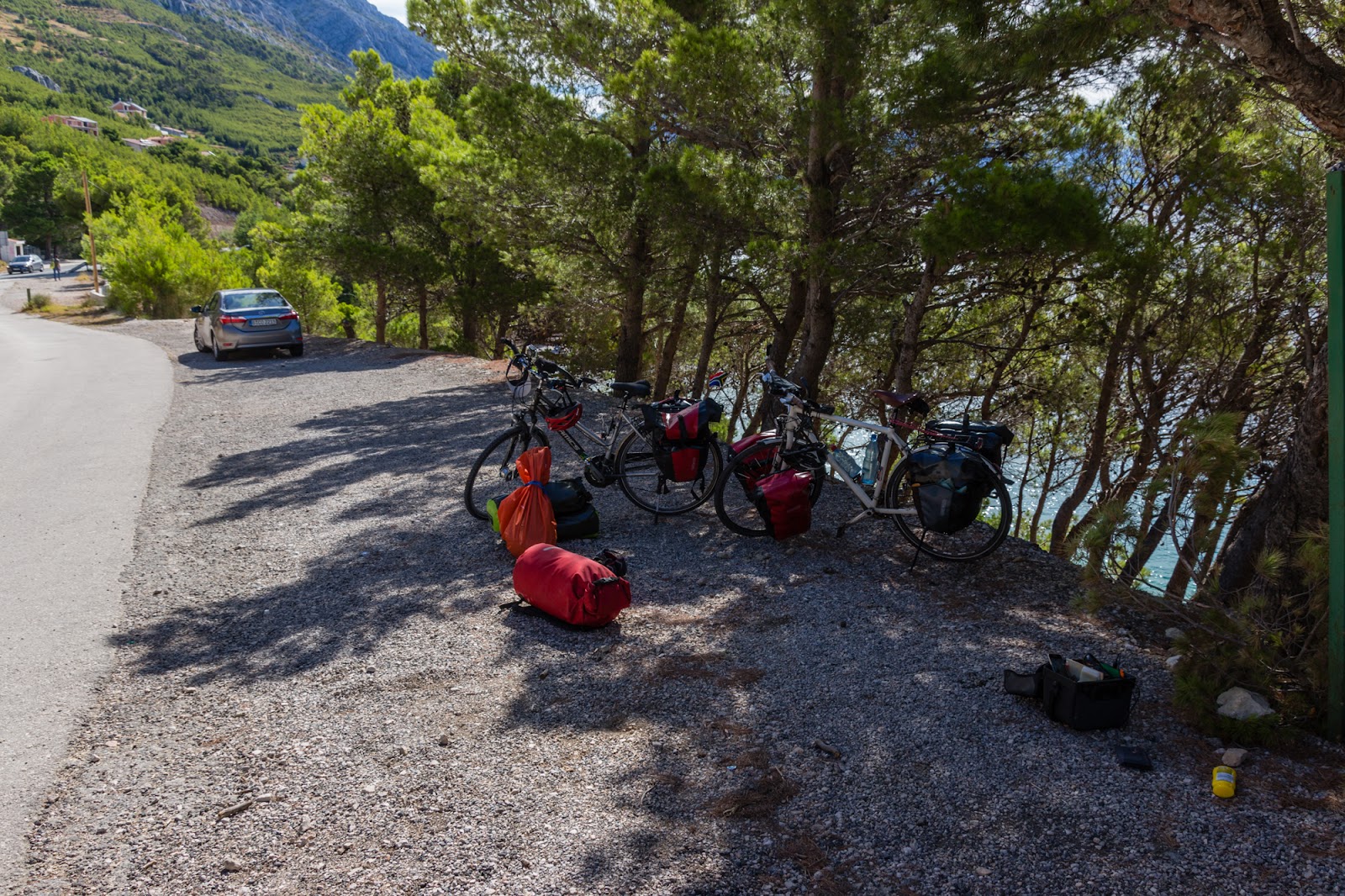 Free camping on the parking lot.

Further south of Makarska, the coastline changed to the most beautiful part so far. The cliff faces got steeper and as we went up and down the cliffs, the views got better and better. At the top of one of the climbs, we met a very friendly Italian police officer and his girlfriend. They were very excited about our trip and we hope we get a chance to visit them in Lake Como when we’re back! 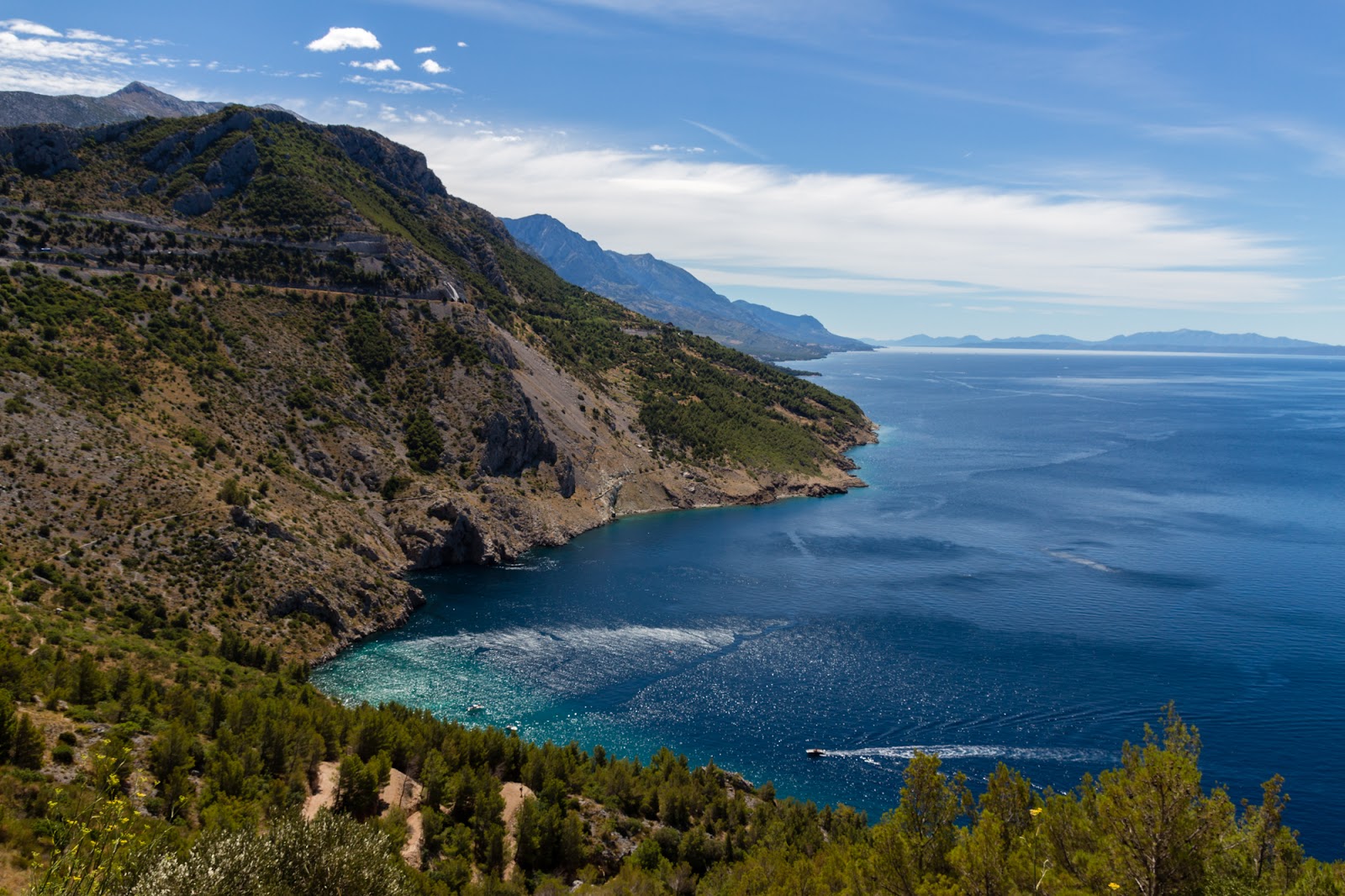 Gorgeous views along the coast.

The road took a turn and so did the scenery. We went further inland and our views now changed to a sea of  marshland, with wild water reeds and bush growing between mountain peaks. 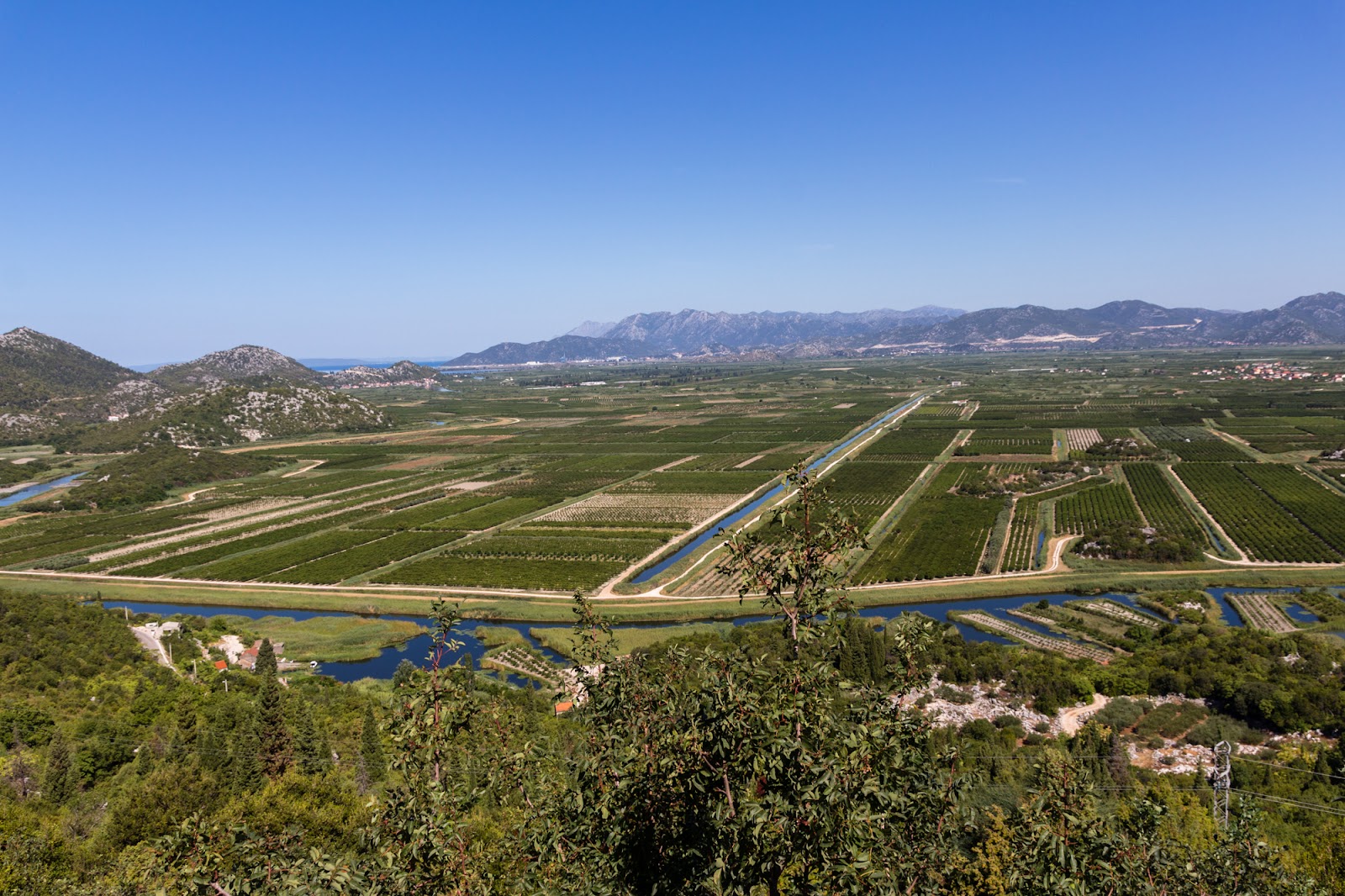 Marshlands around the river Neretva.

The marshland also made finding a place to sleep more difficult and we eventually found a spot behind a church. As we were having dinner, a car pulled up in front of the church blasting loud music… the music turned off after a while and the headlights flickered on and off several times. Simon and I were not sure what was going on. We entertained ourselves by coming up with many conspiracy theories: is it a forbidden romance? Are they doing a drug deal? Of course, neither of us wanted to knock at the car door and prove our theory right; and we decided that mysteries are also entertaining. It could also be someone just wanting a nap on a long drive… but that would be too boring. Eventually, at midnight, the car left and we could finally sleep in peace. 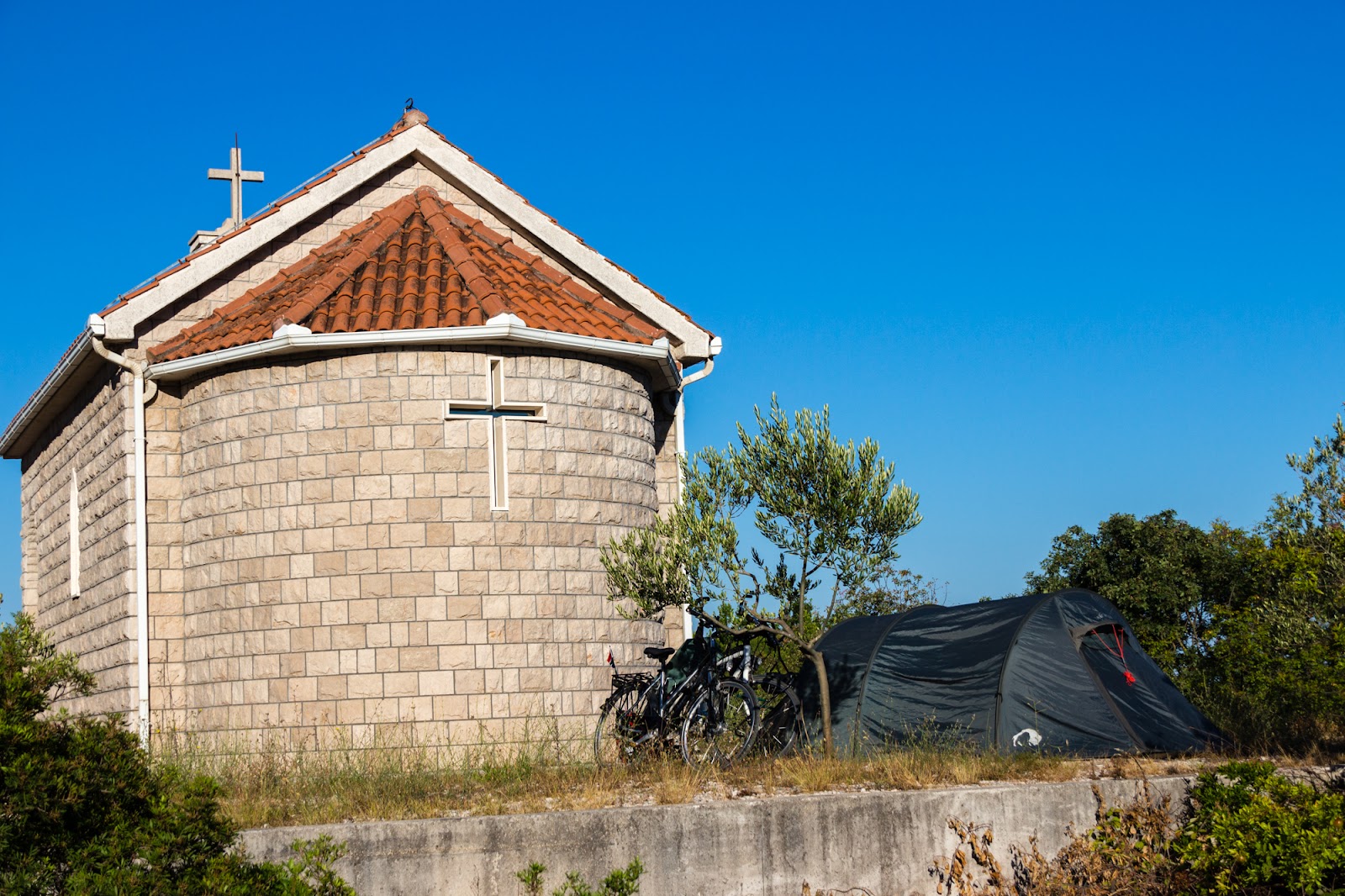 Having a bad nights sleep behind a church.

The next day we stopped in the severe midday heat to cool down in a small town shortly before entering Bosnia and Herzegovina. We did a lot of elevation crossing this 10 km stretch and crossed back into Croatia.

At some point, we decided that we had too much food with us and we shouldn’t buy any more until we eat it all up… we managed to eat ‘ALL’ this food up in 3 hours. And, because of Murphy’s law, there was no more supermarket for the next 30 km! We were starving but had to keep pushing and eventually found a campsite to stay at down a steep hill. They were so nice and even fed us dinner when we explained our situation. It also had a such a beautiful beach with no tourists on it that we decided to spend the next day there and relax. 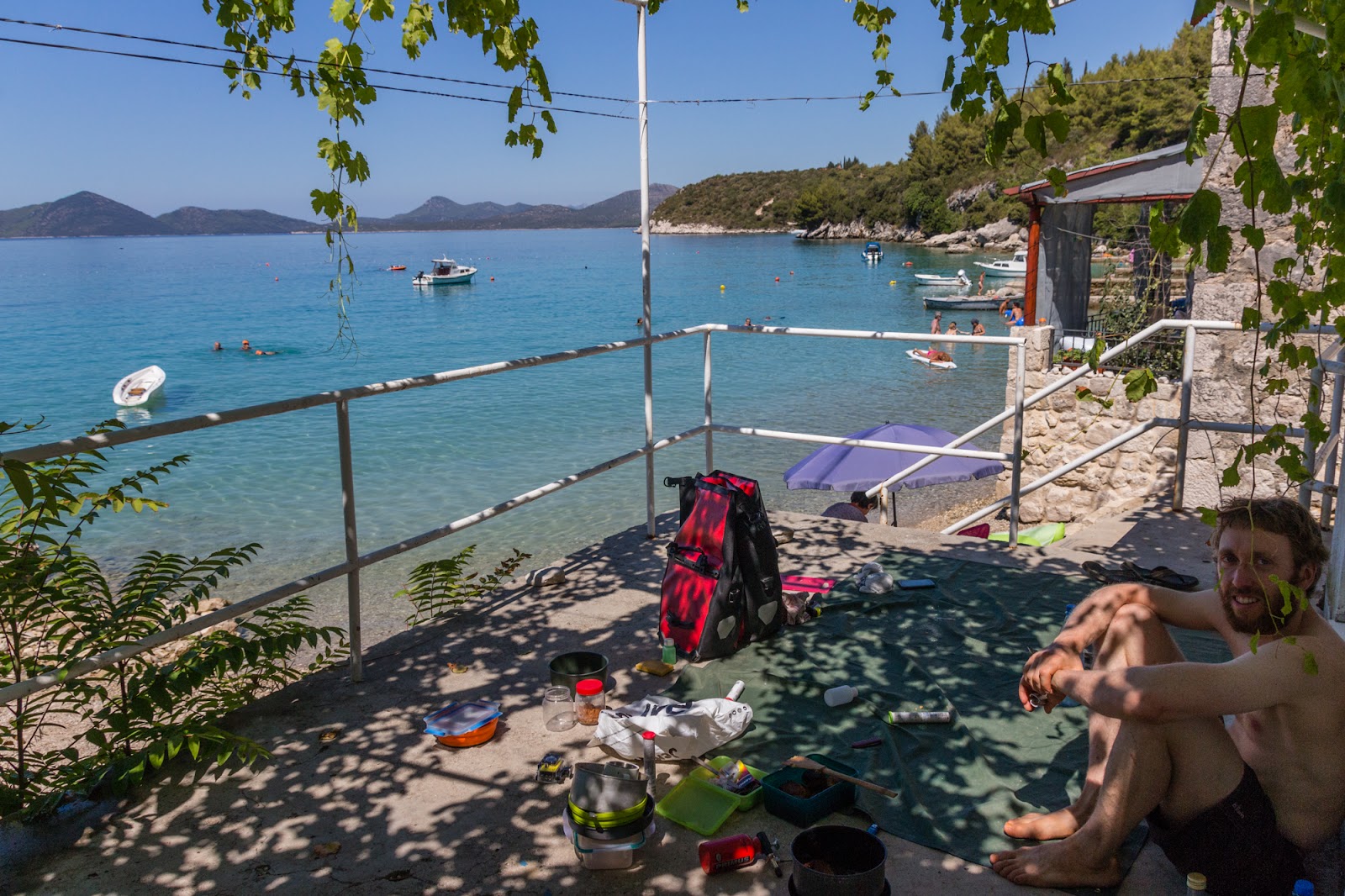 Cycling out in the evening we had some of the most breathtaking views of the sea. The sun went down behind us and Tanya was regretting that we would miss a beautfiul sunset hiding behind the hill. At that point, the sky turned to shades of pink, purple and blue, the water next to us changed to a sea of pink and the islands across from us turned to different shades of grey. It was one of those ‘wow’ moments and there no more regrets. 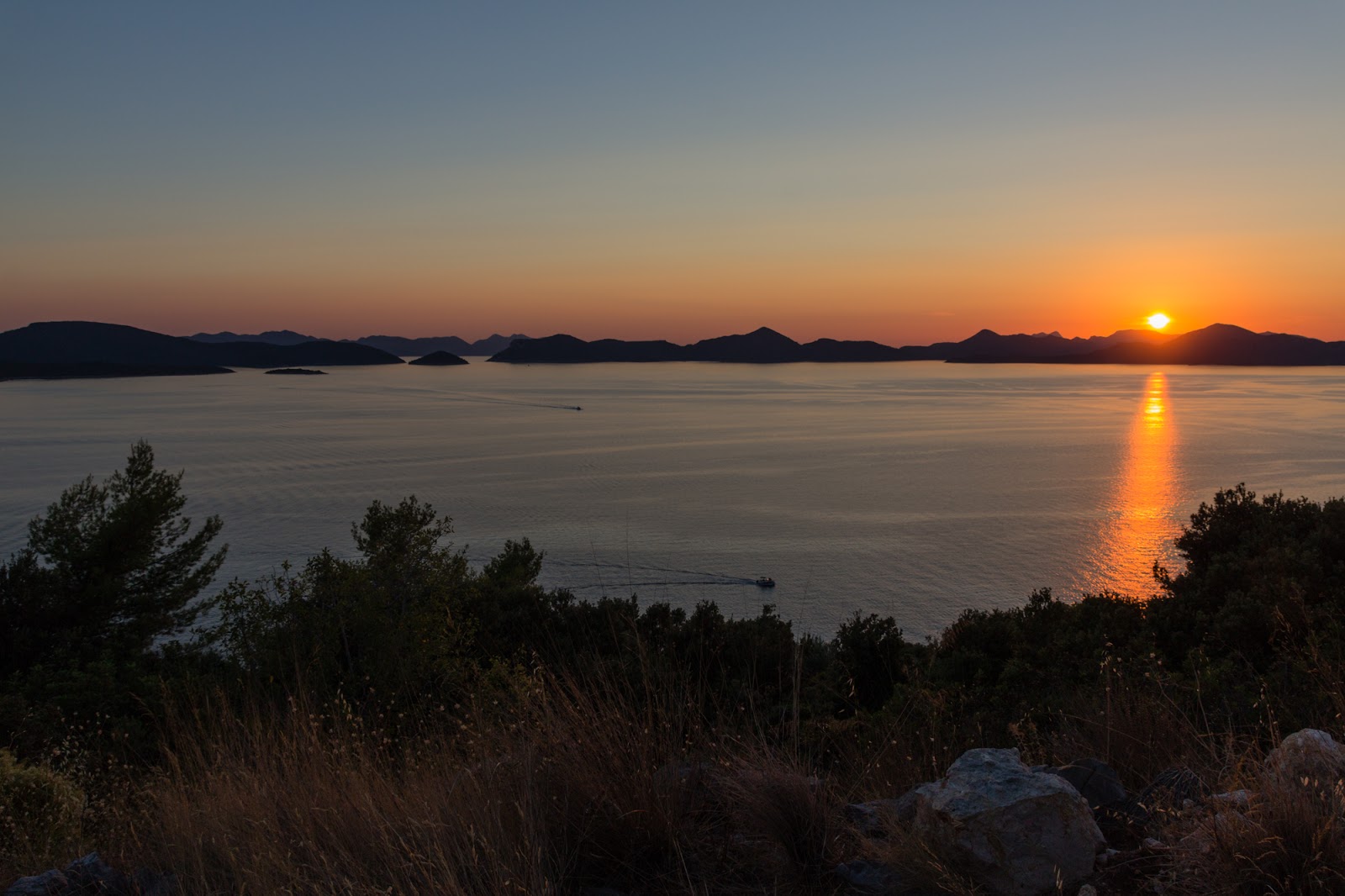 Cycling into the night and enjoying the view.

To top the day off, we found an olive grove to camp on and pitched our tent onto a ledge overlooking the sea, half-full moon and stars. The moonlight was reflected off the sea and we watched boat lights passing through it, floating over the water. In this moment, it wasn’t lost on us how lucky we are to be here. 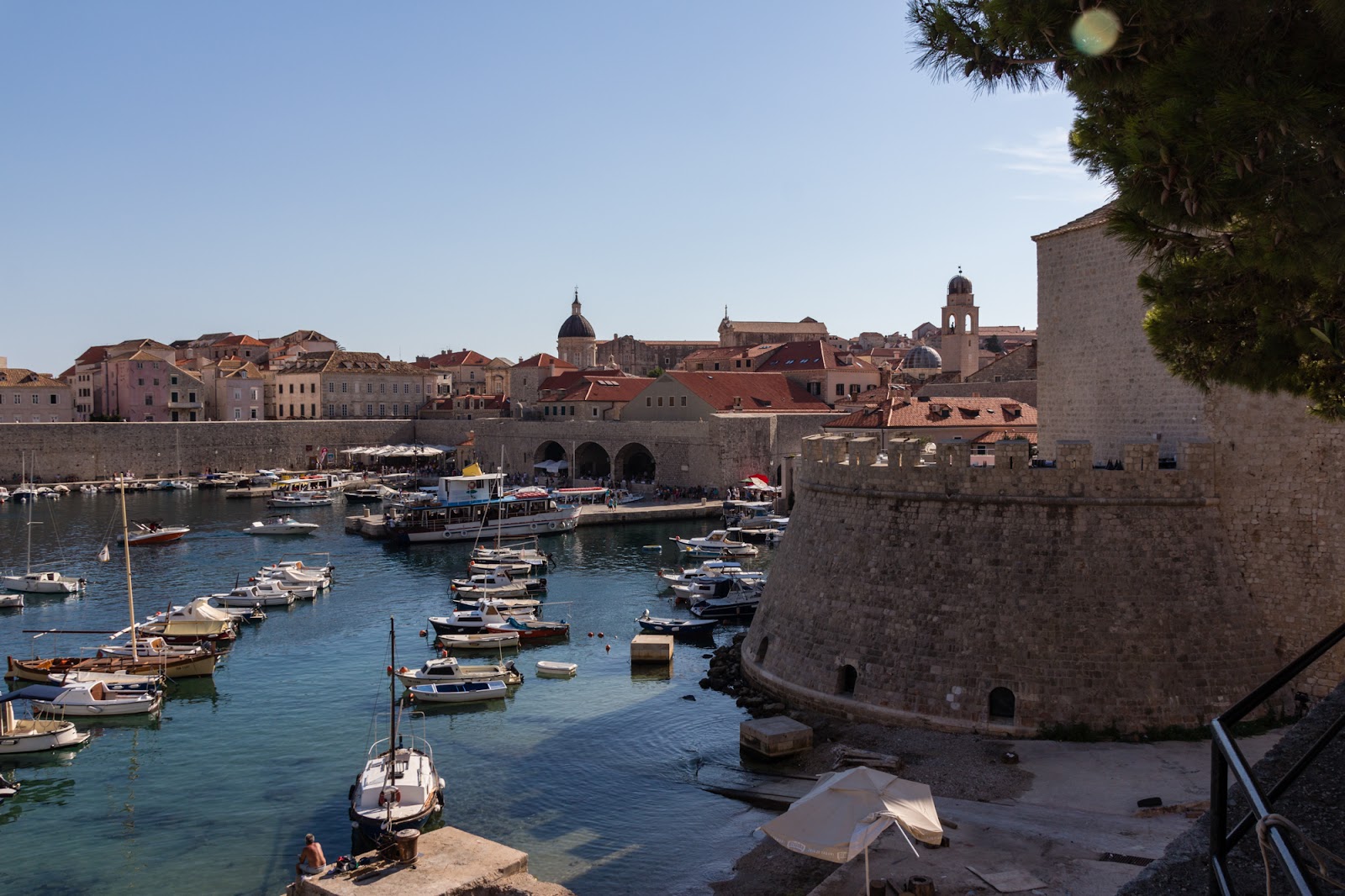 The massive walls of Dubrovnik.

Cycling into Dubrovnik the next day, we came across the magnificent walls of the city. Simon had visited the city before but for Tanya, it was like nothing she had seen before. The tall towers connected by thick walls running into the sea looked like something out of a novel. In fact, it was ‘out of a novel’ as this city was used to film the television series Game of Thrones based on George Martin’s fictional story. 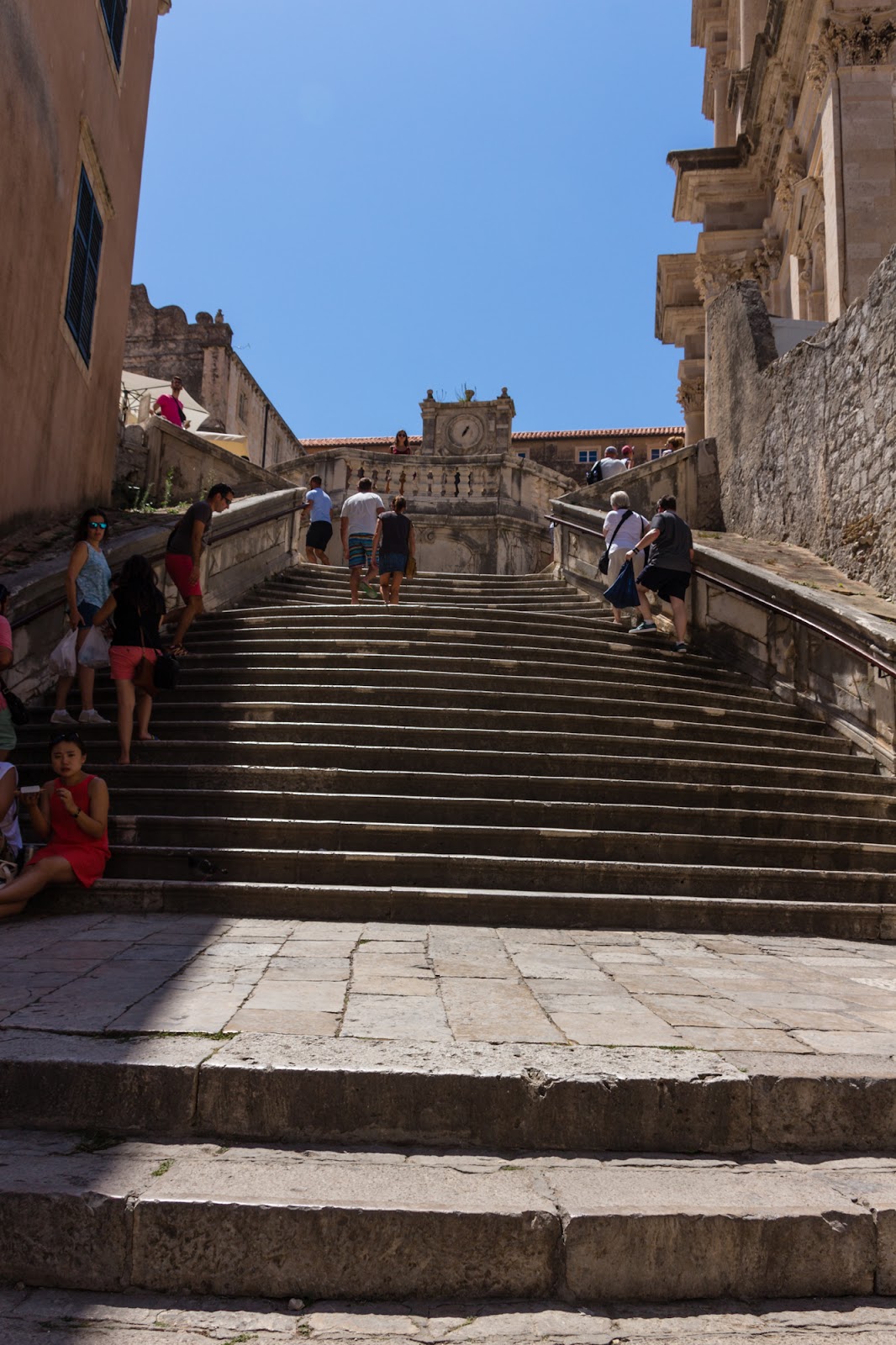 The ‘walk of shame’ of ‘Game of Thrones’ was filmed here.

The city has an interesting story of its own and with the city standing since the 7th century, it has seen kings, war, fire, an earthquake and destruction.
We pushed our bikes through the main part of the city and Tanya enjoyed some pear flavoured vegan ice cream in the main square. Inside the city walls stood stone buildings and impressive churches. We were glad to have visited in the morning (11am) of a weekday, as the the tourists poured into the city like a river after 2pm. Buses and buses of them. We took a break at the small beach around the corner from the harbour where we could enjoy a swim and some lunch in a quieter place. 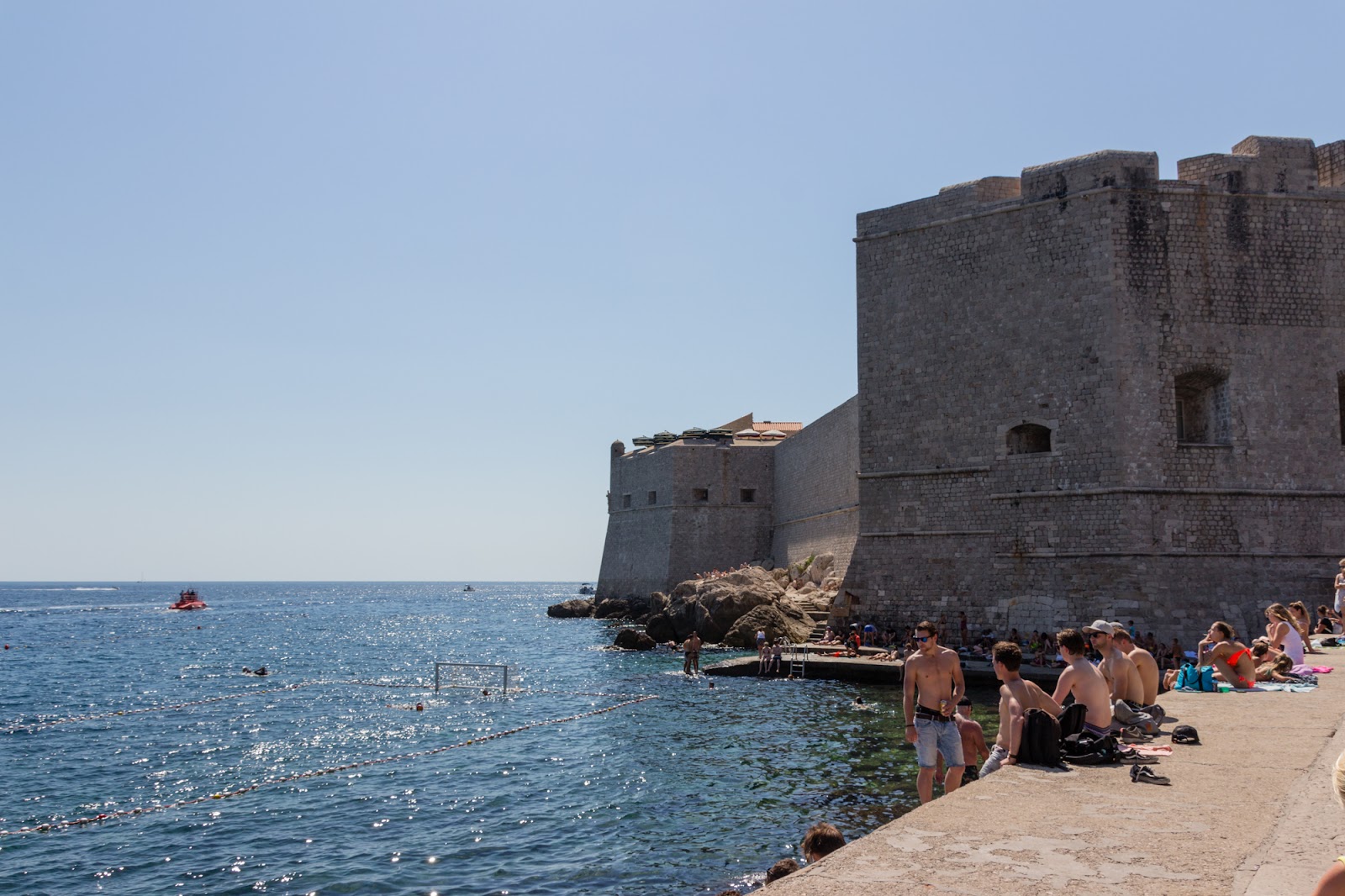 Enjoying the ocean directly in Dubrovnik.

Cycling out of Dubrovnik was not so relaxing, though. The road out was steep and even though it was late afternoon, the sun beat down on us. The city – seen from higher up – was truly incredible and it looked like something you could only imagine in a dream. 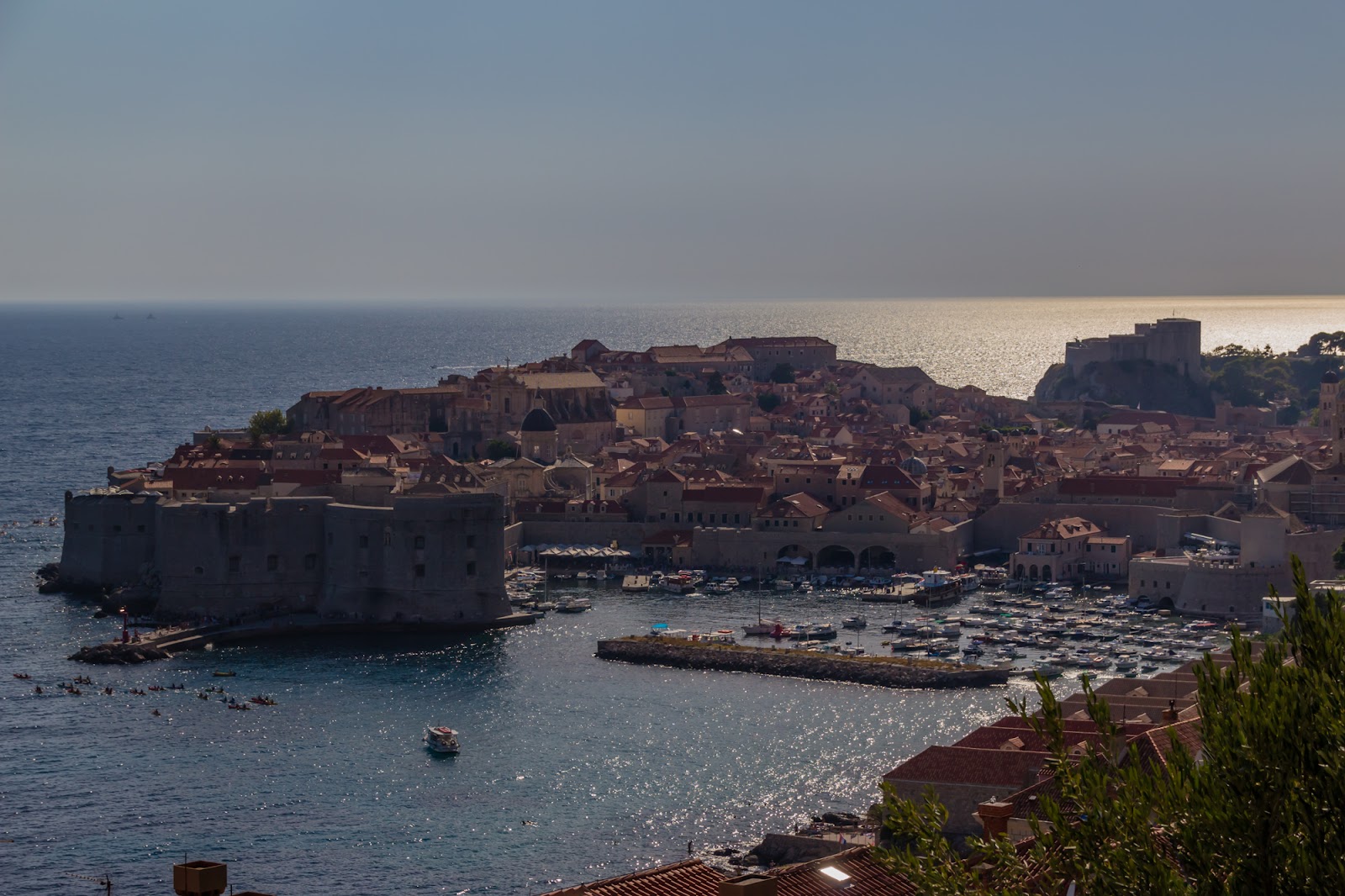 Dubrovnik from the south as we left.

Further south we cycled to the only warm showers host in Croatia – Marko. He not only hosts cycle tourists but he has made a community for us in his piece of wonderland (www.natureparkmikulici.com). The pathway behind his house leads up to a large area for camping and a communal area. Exploring the place, we found some impressive huts that people made out of unwanted materials. All odd bits and pieces had been put together to make a very cosy home for traveller who had spent the Winter and Autumn there. There was also a two story hut with sofa on top tucked away behind trees and even a toilet overlooking the sea. It wasn’t luxury, but that’s the point. It was nature, and it was so relaxing that we spent two nights there. 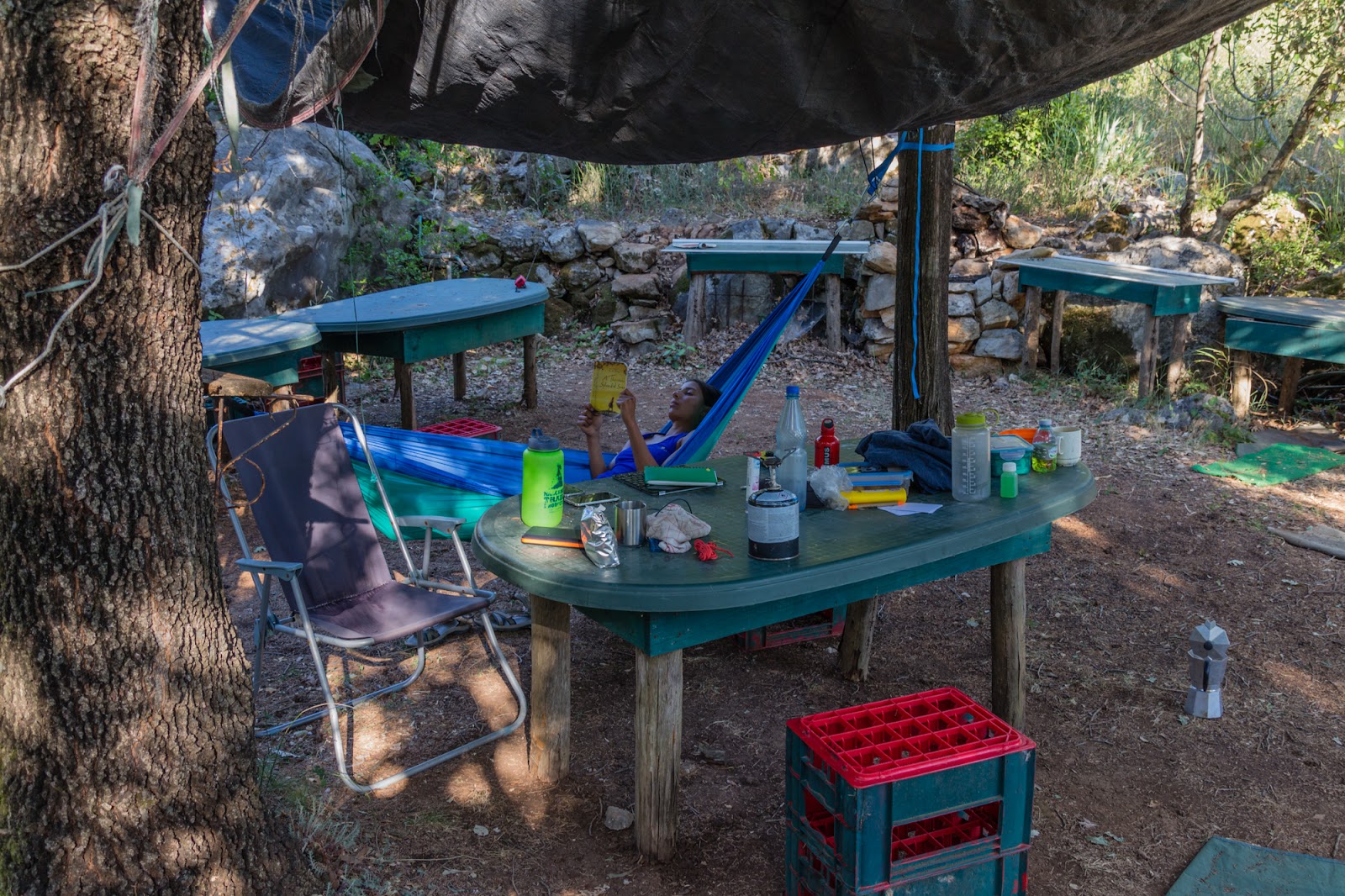 Relaxing at the hippy camp site.

His place was not exactly on the way and we had to work to get there. It is up on a hill which overlooks the sea but in our opinion it was worth the effort. We met three other cyclists on our first night – a  french couple who have been on tour for four months and were doing the last two months towards home (www.lesfabsavelo.wordpress.com). We also met Micky, from Macedonia, doing a 10 day trip and we had a nice evening with all of them exchanging stories and tips. 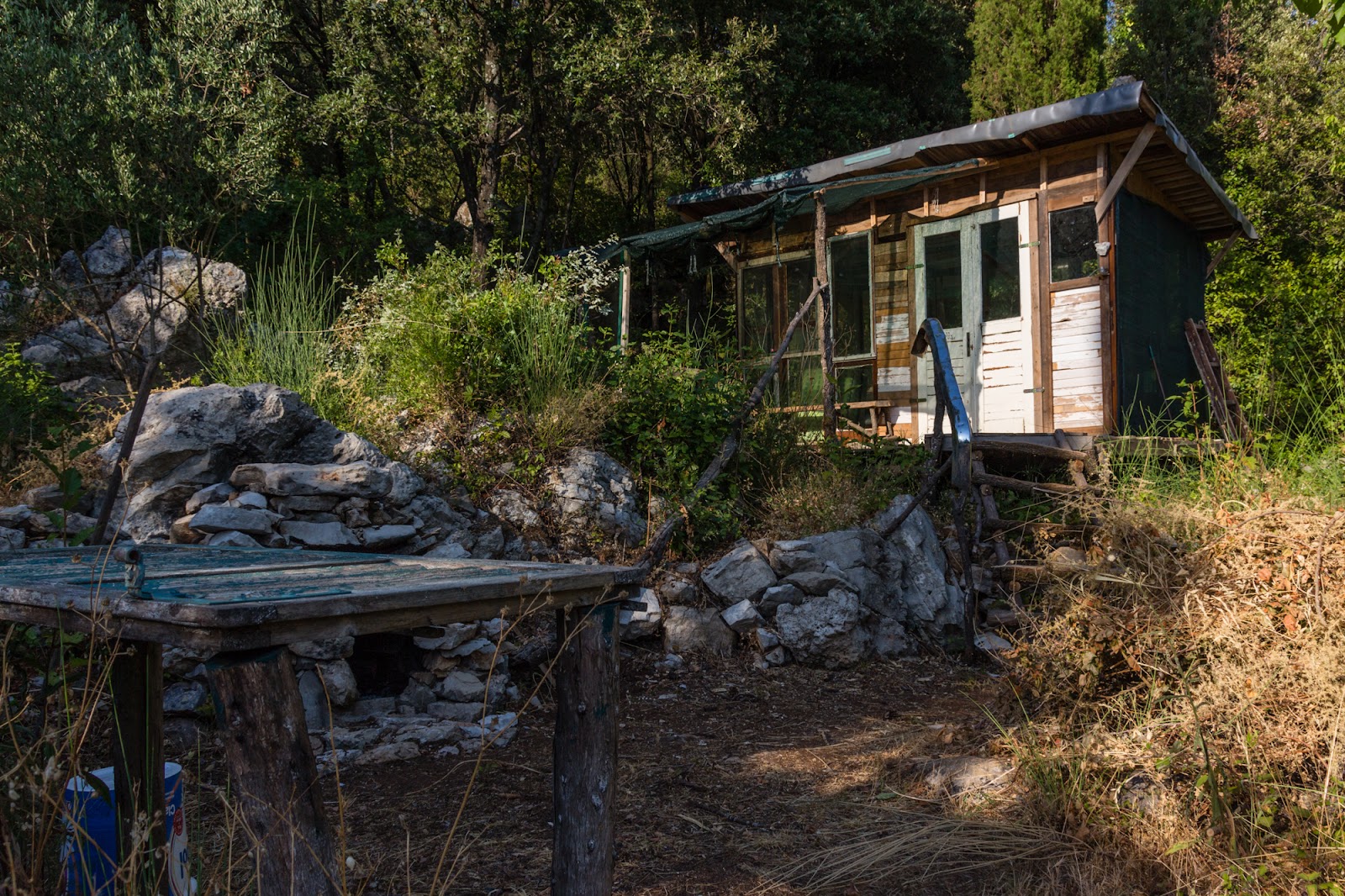 Self made houses at Marko’s wonderland.

Marko was a great host! He was super friendly and hearing his stories about how his traveller refuge got started was very cool.

Leaving Marko’s house, we got a surprise. We saw traces of Tanya’s sock lying around and two sheepish dogs looking at us. Tanya got half of her sock back but it was hard to be mad at the cute mother and son pair playing around. 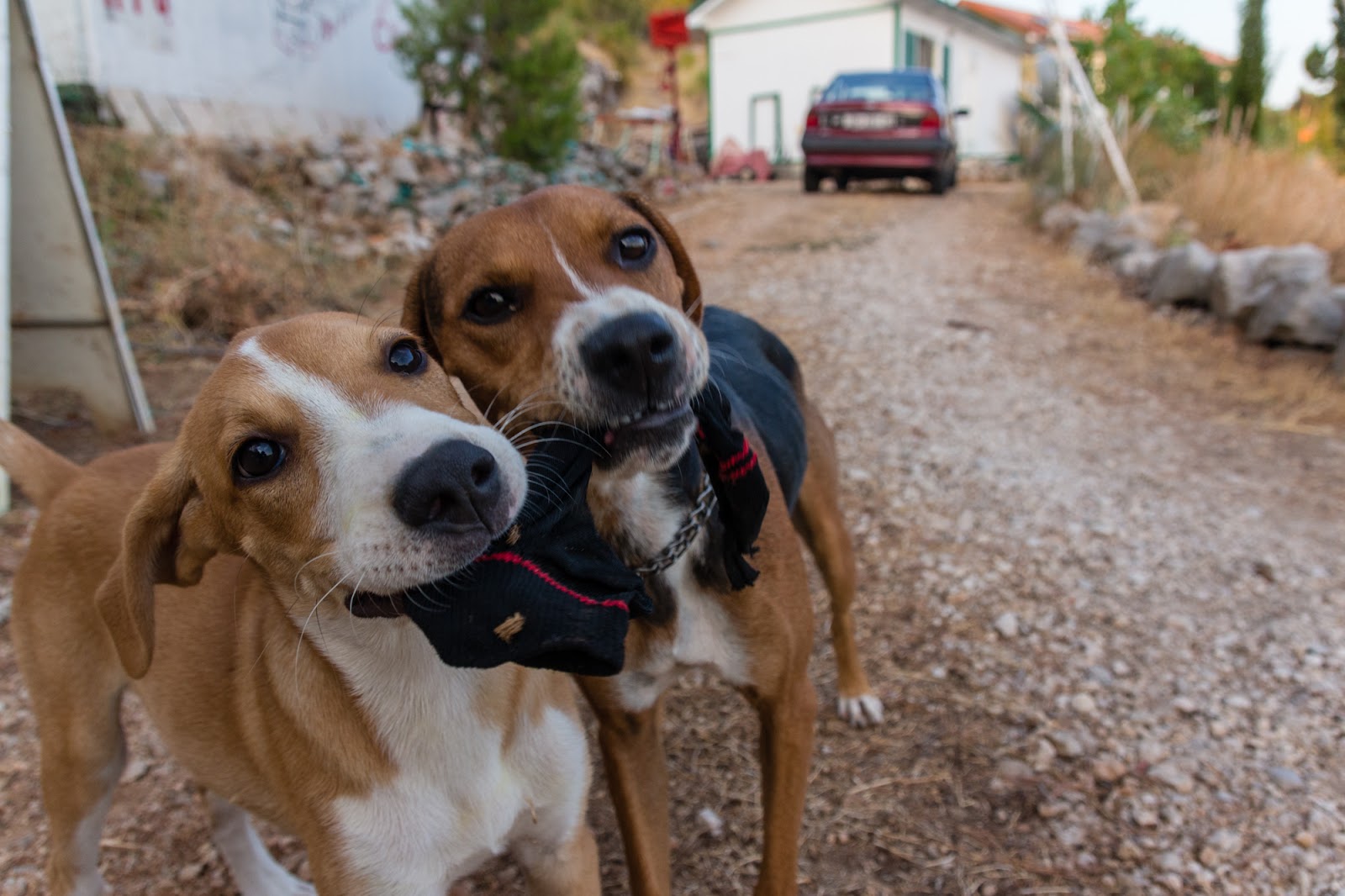 It was a relaxing two days and from there we moved on to Montenegro and the Bay of Kotor. More to come in the next blog…

For more photos from this leg of our journey, see here.