Cairo and the Great Pyramids of Giza (Egypt #1)

We arrived at the airport and the haggling immediately began. It was very easy to find a taxi big enough to fit our bikes and we had a smooth ride to our hotel. Once we had hit the Cairo traffic, we were VERY happy that we decided to take a taxi instead of cycle. It was night time and the traffic is just crazy here! Walking in Cairo is dangerous, let alone cycling in Cairo. Somehow it works, though, don’t ask how. Organised chaos. 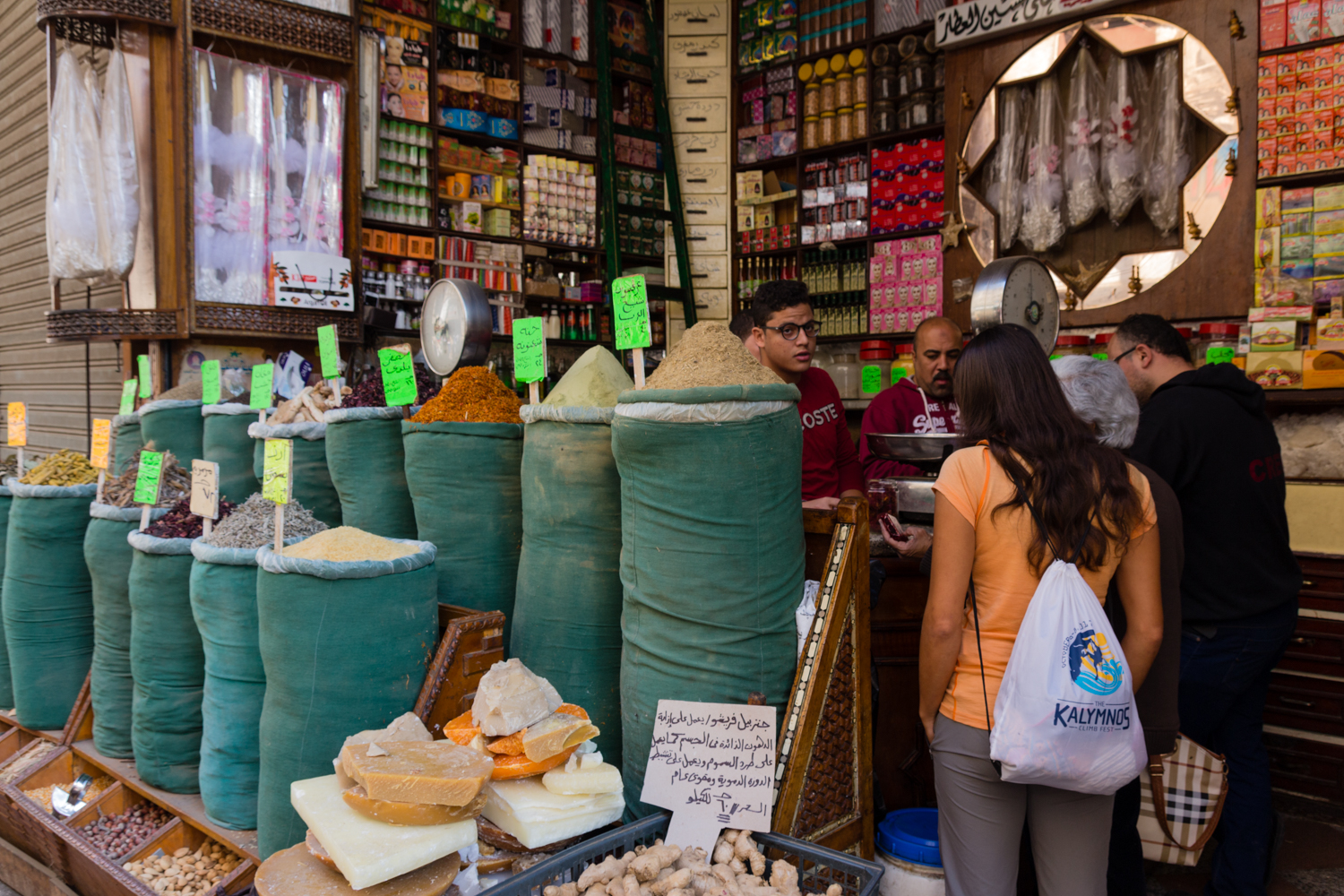 Lots of spices at the market

Cairo sounds like one longggg horn. A never ending “Beeeeeeeeeeeeeeep!”. They hoot for everything. Taxis hooting at us, minibuses hooting for locals to hop in, cars hooting at each other… sometimes they hoot just for the sake of hooting.. or so it seems.

We were lucky in that Simon’s sister has lived in Cairo and her boyfriend grew up here. So they wrote us an Insider’s Guide to Cairo on where to go, what to see, where and what to eat. Tanya’s mother decided last minute to hop on a plane and visit us in Cairo. So we set out after she arrived and visited the Al Hussein Mosque, Al Azhar Mosque and the souk (market) Khan Al Khalili – all in the Islamic district. 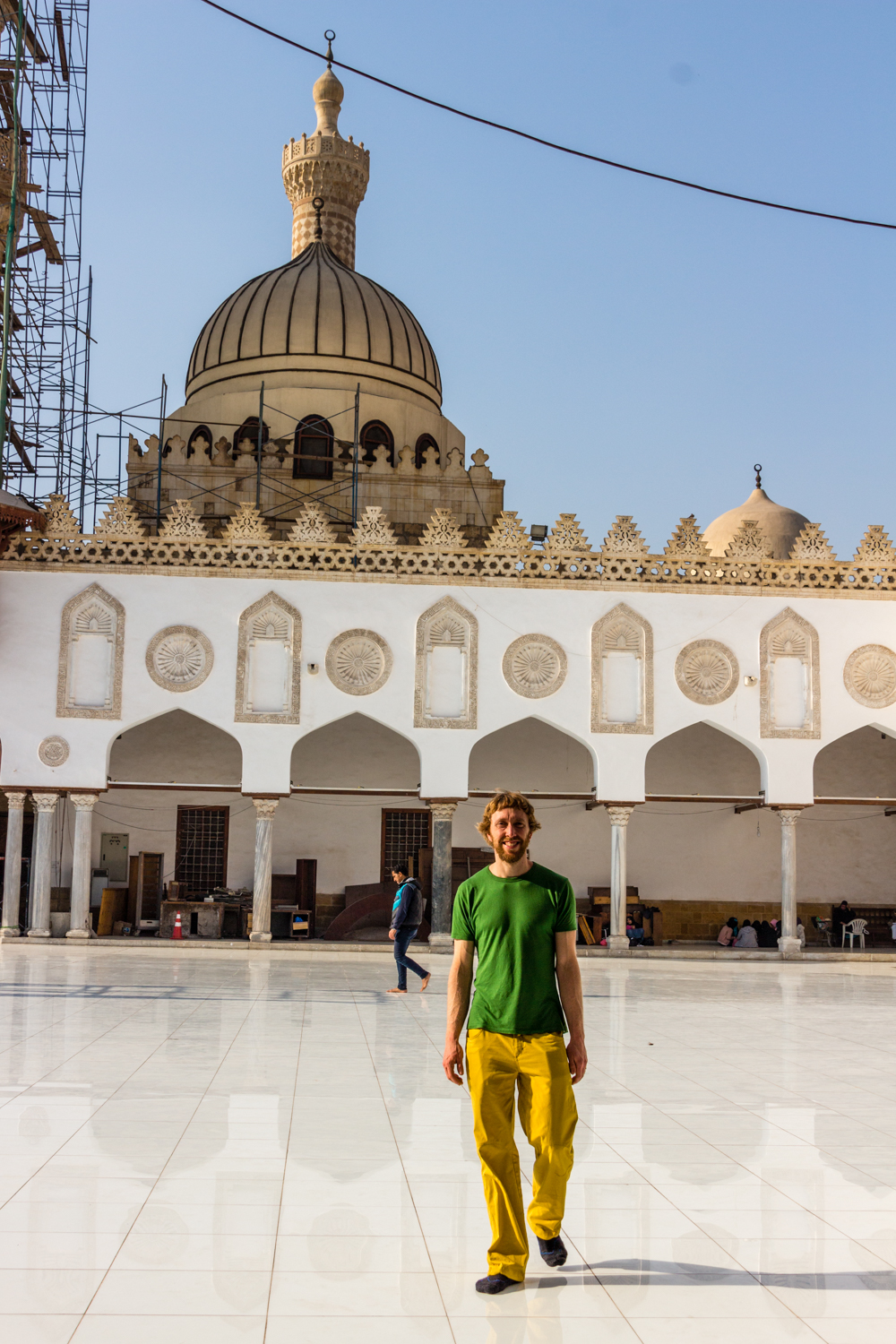 There is also a chaotic and interesting street in the district called Al Moez Street. This street is crazy and busy and a taste of how people live in this part of Cairo. You probably won’t see any other tourists here! Fruit and veg markets, some disturbing meat markets and lots of chaos. Further down the road there were colourful handmade carpets and bags… and by handmade we mean they are making them by hand in front of our eyes. We had to watch out for the tuk tuks on this street, they just drive straight through and we had to jump out of the way! 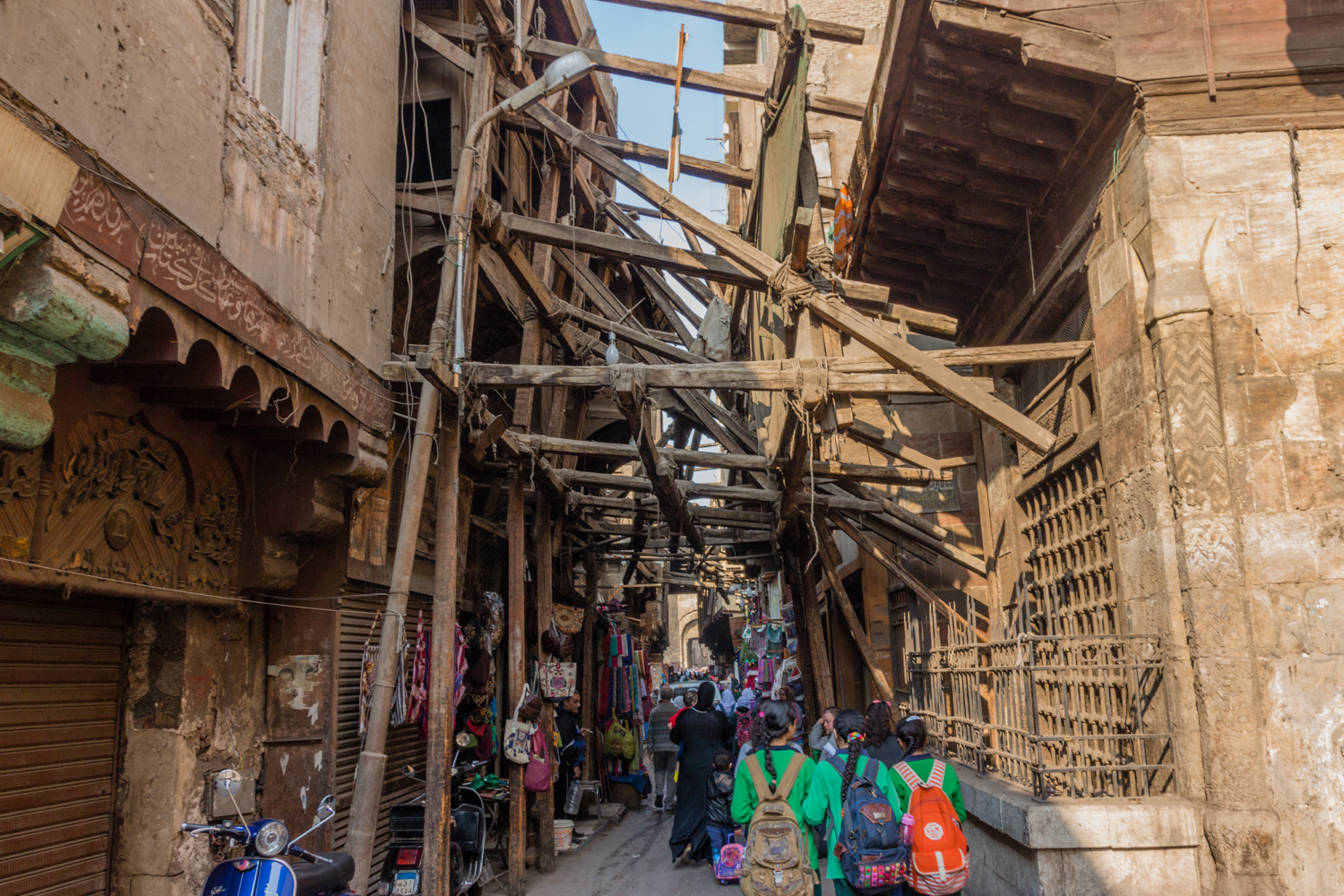 End of the market

We went into Al Moez Mosque on the same market street. It was our favourite mosque in Cairo. The man took us up on the roof (20 L.E. each) and we had a beautiful view of the other mosques and their minarets. It was so peaceful up there, we could have stayed for a while… and then he blasted out a short prayer song through the speaker next to us, nice I suppose. 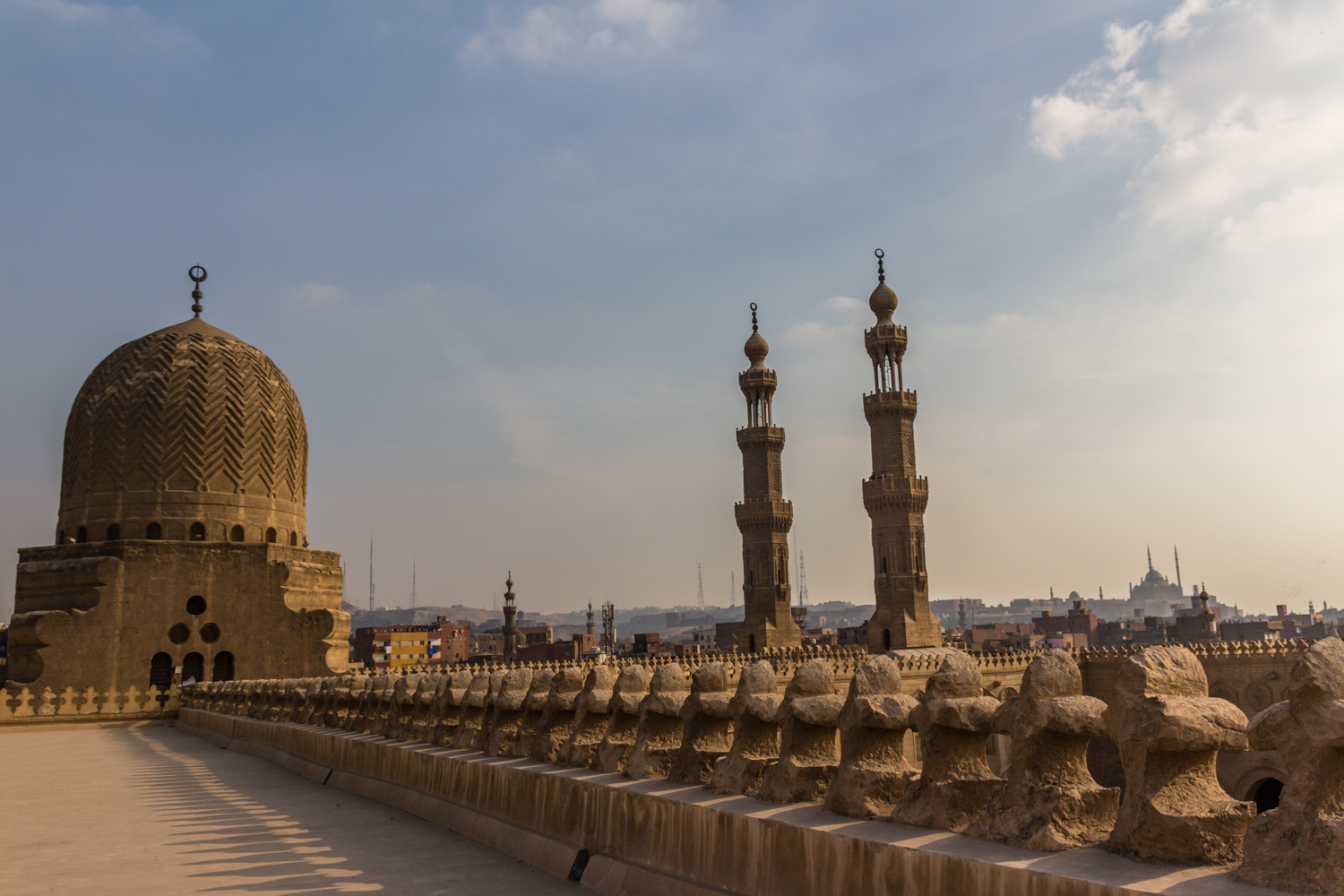 The view we saw from the other side was a stark contrast: rubbish upon rubbish, piled on top of roofs. Egypt has no garbage disposal system. Instead, people leave their garbage outside their homes and boys from the poorest families of Cairo come to collect it in the evening. They take it to their district nicknamed Garbage City, where they sort it out and have to live with the stench. The rest ends up on rooftops or elsewhere. 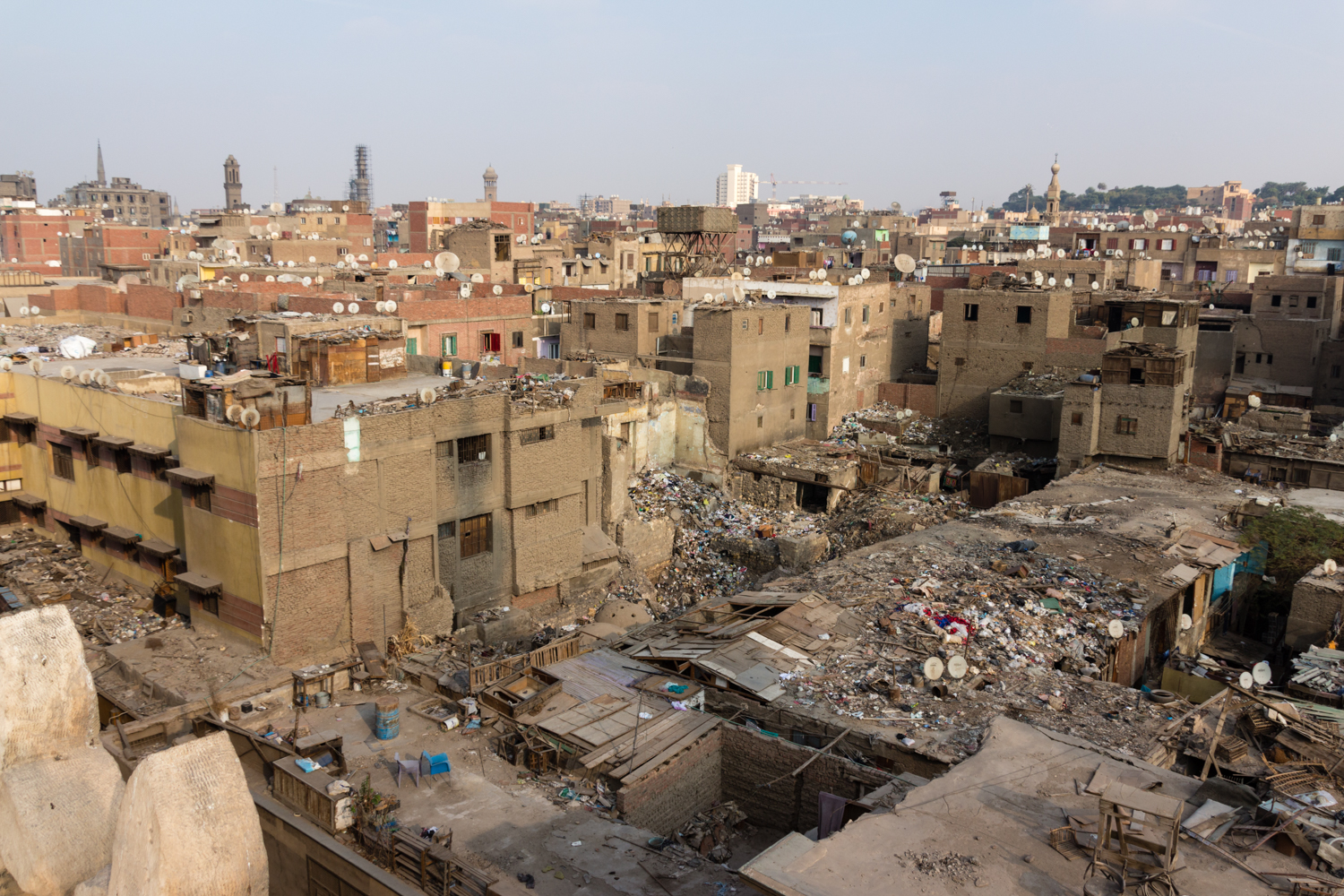 Rubbish on rooftops in Cairo

Walking through the market area was also interesting, hearing the sounds people make in the city. If they want to call someone else, they would go, “sspssss, ssspsss,” almost like calling a cat. A mobile food cart with a massive iron frying pan on it passed by. We bought fried bread covered in powdered sugar from him and Simon was a bit surprised when the man blue a kiss to him. We later found out that’s one way to say thank you in Egypt… but only between men of course.

We visited the Egyptian museum which looks like it hasn’t changed from the 1950s. There was a sign saying “please don’t touch the artifacts”, which itself looks so old it should also be framed… and another sign added below saying “please don’t touch this sign”. The museum has no labels or information. It would have been better to get a tour guide or maybe download an audio guide to explain what we were looking at… A lot of it we had no idea about. Rumor has it that only a third of the artifacts are on display and two thirds are still in the basement – unsorted, unlabeled and piled on top of each other. We heard that someone obtained the key for research, took one look inside and said “forget it”!

The artifacts in the museum are just incredible though. Treasures from Tutankhamun’s tomb, alabaster carvings, papyrus works, jewelry and sarcophagi everywhere… and of course Rosetta’s Stone – the key to unlocking the hieroglyphics as the same story was written three times in the royal, religious and working languages. 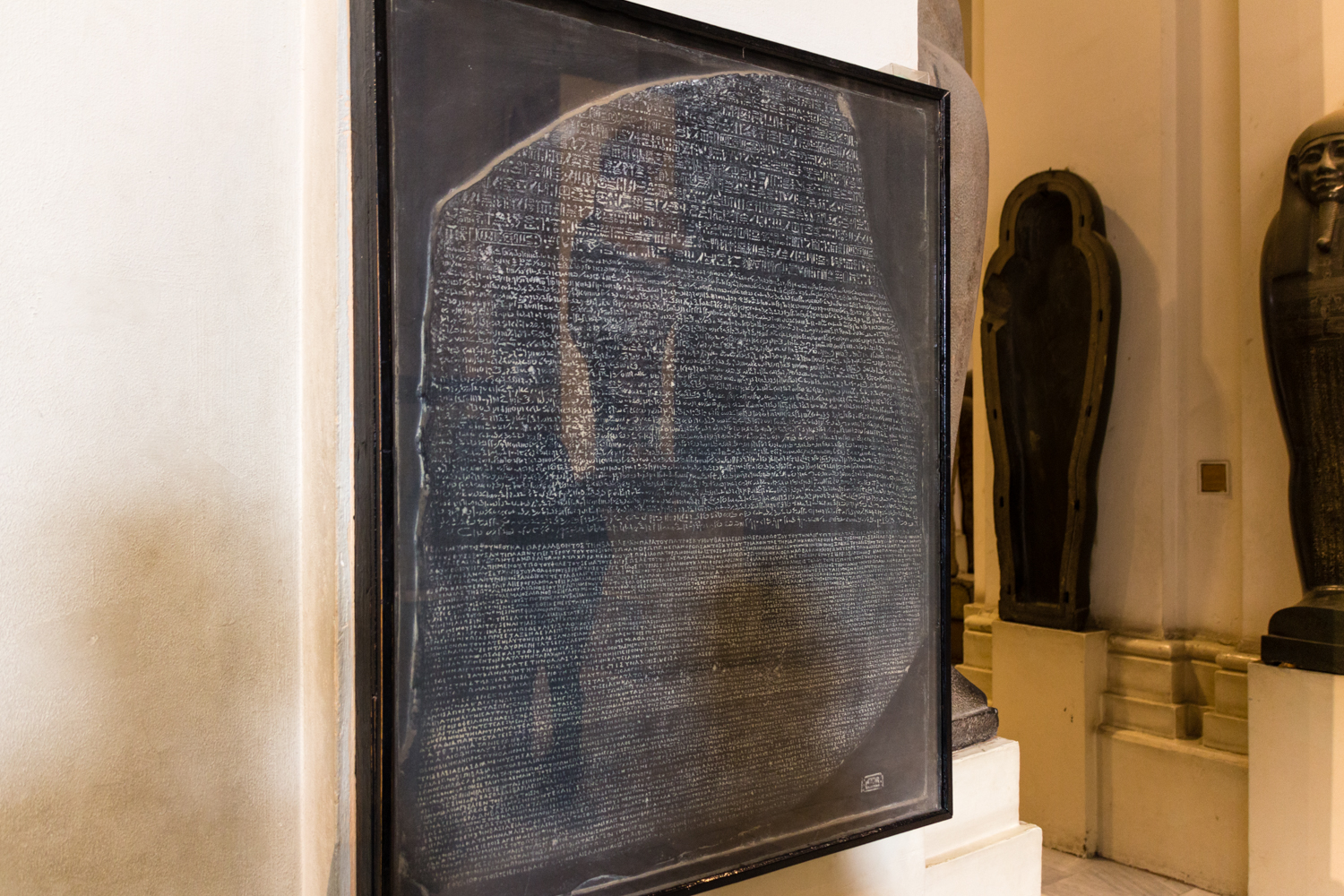 We also entered the mummy room where we were blown away. The mummy of Ramesses II, Queen Hatshepsut, her stepson Thutmose III and others are on display. Their description of Queen Hatshepsut was a little questionable, though. They described the male pharaohs as having dental problems and diabetes… when it came to Queen Hatshepsut they wrote, “she was obese and had bad teeth”. We had to read it twice to make sure they were describing the same famous female pharaoh. 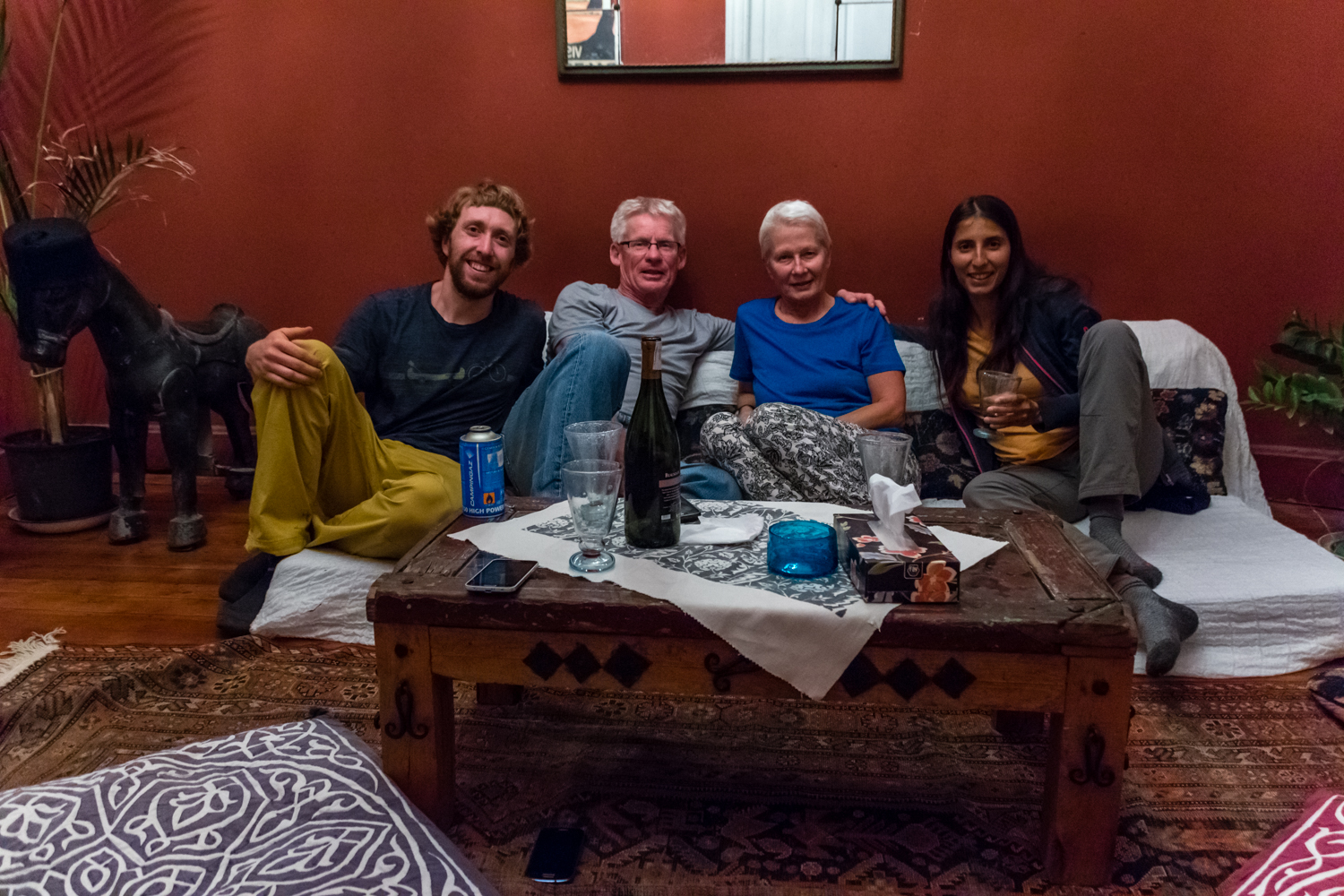 Colleen and Peter are also cycling to Cape Town

In the evening we met Colleen and Peter! Two other cyclists enjoying their retirement and cycling to South Africa. It was amazing to meet them and we were glad we caught them on their last night in Cairo. We enjoyed Koshary for dinner and then some wine back at their Air B&B. It was a great evening. Tanya’s mom, meanwhile, was dancing the night away on a Nile boat. 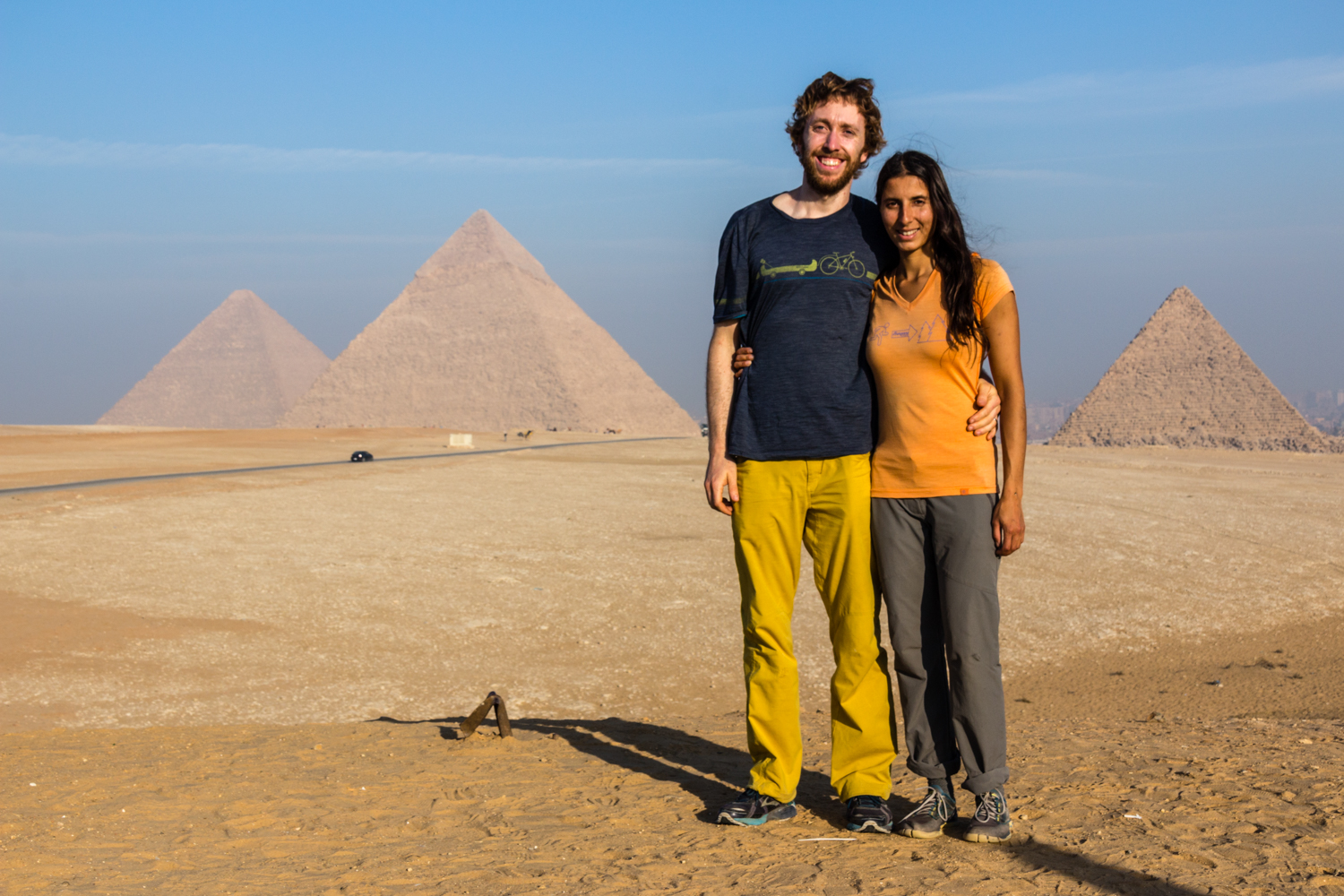 The Pyramids of Giza

The next day we saw the world renowned Pyramids and yes, they were impressive! The size of them is just hard to believe. What was also beautiful there was the desert where we could escape the persistent salesmen. We wondered between the Pyramids and enjoyed the quietness of the desert, although one or two camel riders still came riding after us, unable to comprehend that some people like to walk.

What we didn’t know was that the whole sight closes at 4:30 pm… so that meant Tanya missed out on the Khufu Ship, a fully intact ship buried beside the Great Pyramid of Giza and possibly meant for Khufu to use in the afterlife. 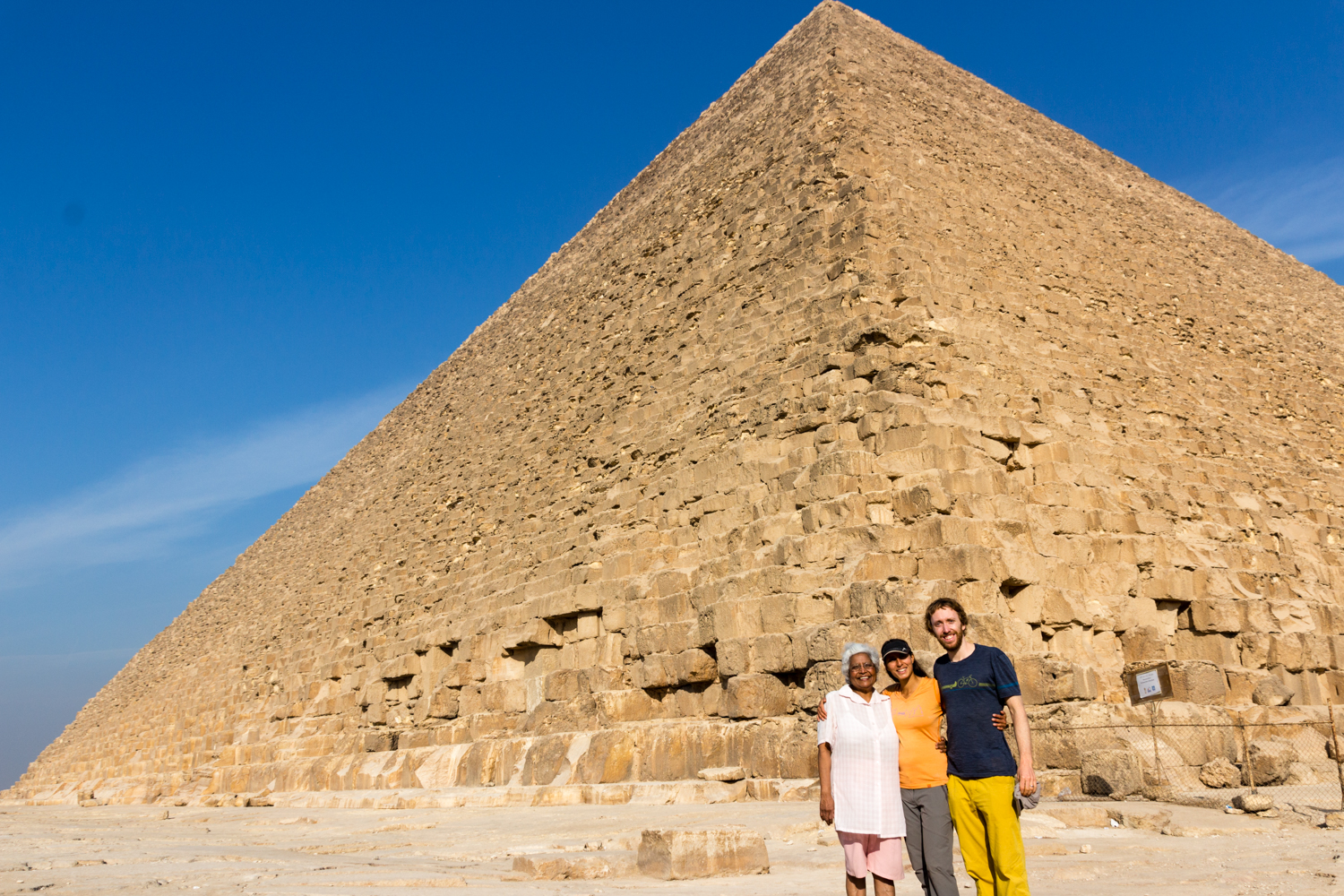 Visiting the Pyramids of Giza

We also stayed for the Light and Show Spectacular, which had a lot of light but not much spectacular. Instead of paying though, we got a seat at a rooftop restaurant and payed for food and a shisha instead. Smoking the pipe while listening to stories from Ancient Egypt was more entertaining. While up there, Simon had an epiphany: what if all the smog over Cairo was just from the smoke rising from millions of shisha pipes in the city. Just a thought. 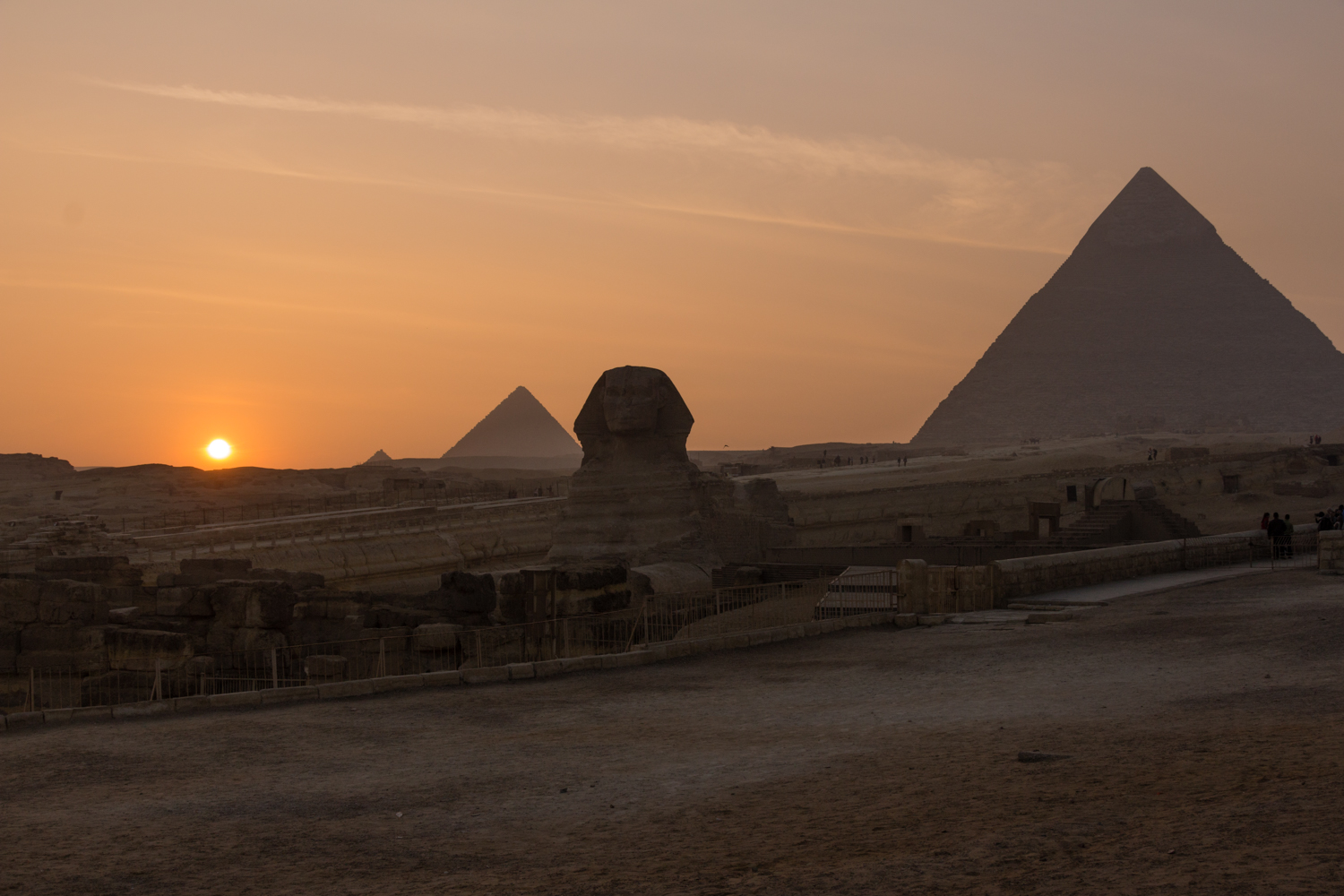 The Sphinx and the Pyramids of Giza

We also saw the citadel in Cairo, which had great views over the city. What we didn’t love so much about this place though was that all the teenager school groups wanted photos of us… like ALL of them. We went to a tourist attraction but we felt like one ourselves! At first it was funny but then it got overwhelming. We had to start refusing people and Tanya even had to put her headscarf on to try and blend in. We now know how the royal family feels. It’s a tough life.

In any case, a group of Chinese tourists arrived soon afterwards… we weren’t so interesting after that. 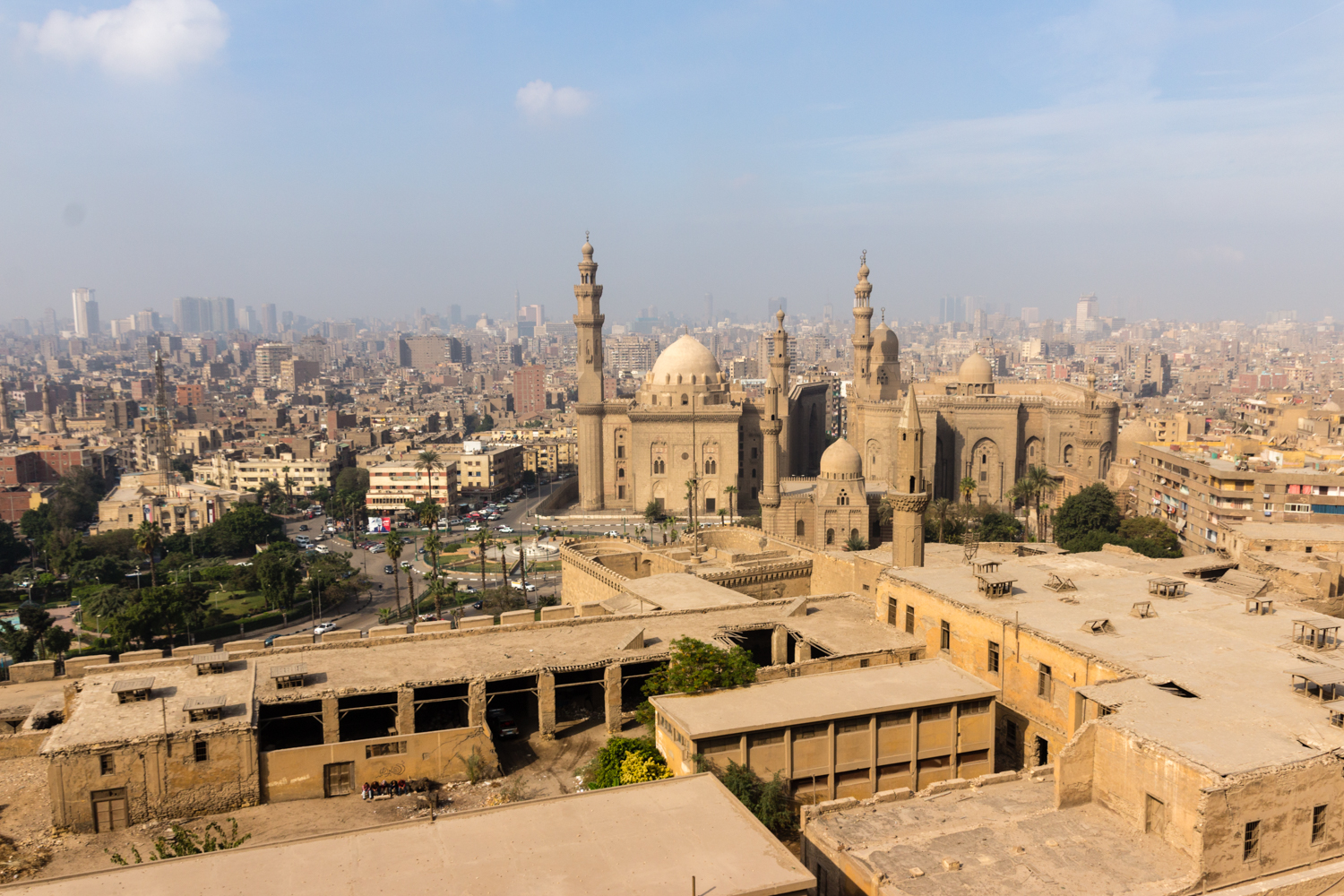 View from the Citadel

Salesmen love to ask us “where are you from?”. It’s the start of their sales pitch. They are relentless and annoying. Whenever Tanya says South Africa, they say Bafana Bafana (South African soccer team). Now when they ask Tanya, she just says Bafana Bafana to save everybody time. We also had some fun with them and said Papua New Guinea or Solomon Islands. They look at us very confused and we don’t hear any sales pitch after that. 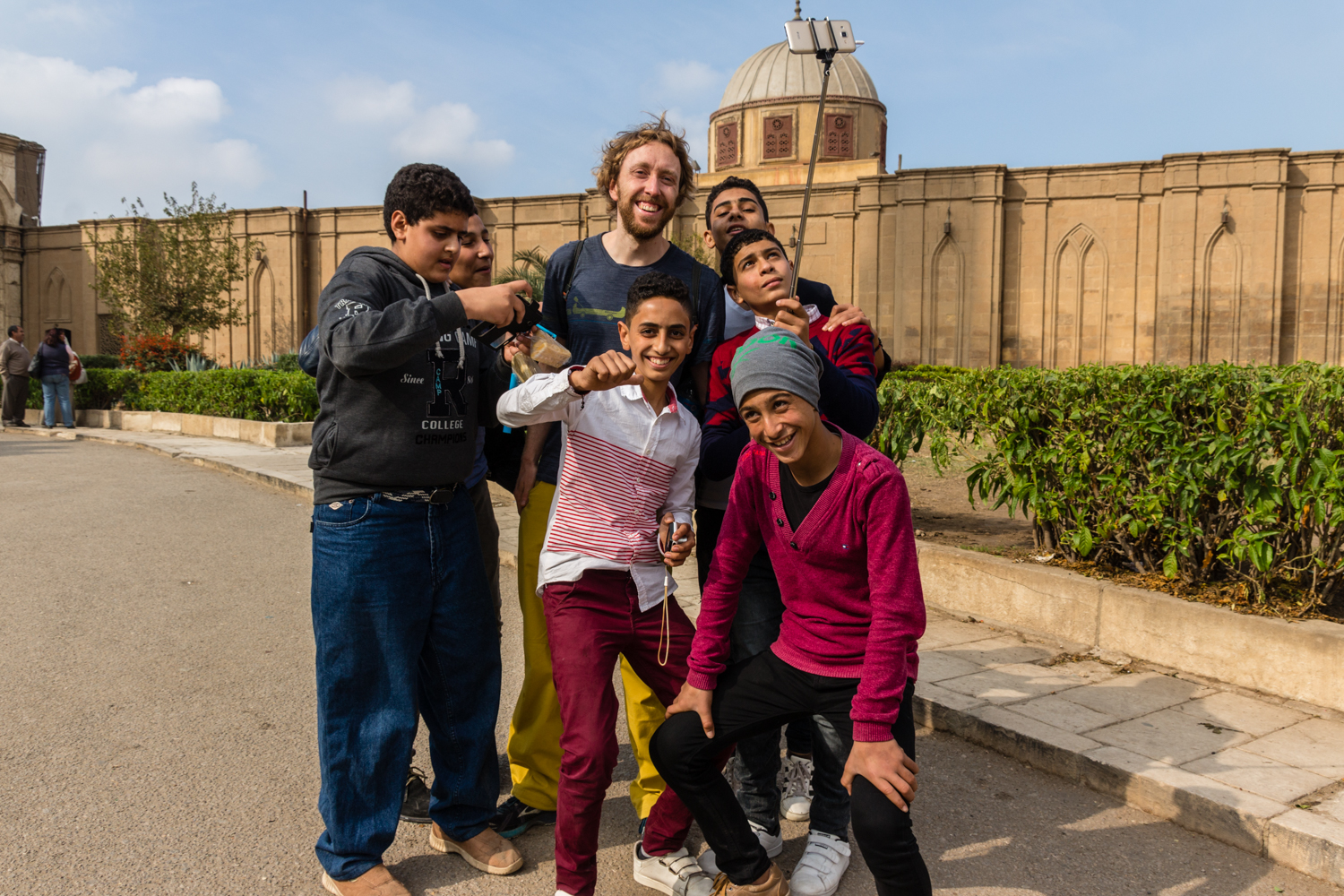 Everybody wants a selfie

We went to Attaba souk where there are clothes and accessory stalls everywhere! We also witnessed a phenomenon in Egypt – rain. It rained. In Cairo. We only had rain once on this trip, in Athens, but we get it again here, in Egypt? Everybody went crazy, running to pack up their stalls. The rain only lasted for a few minutes and everything eventually returned to normal.

Simon first asked at the stall for a pair of long shorts for Sudan…the guy quoted him 60 L.E. (3 EUR). Fair deal, but we wanted to think about it. When we came back half an hour later, Simon asked him the price again. You could just see him thinking about it, trying to remember what price he said before. Then he said, 25 L.E. (1.25 EUR). It was so cheap, we didn’t even know we were getting ripped off. 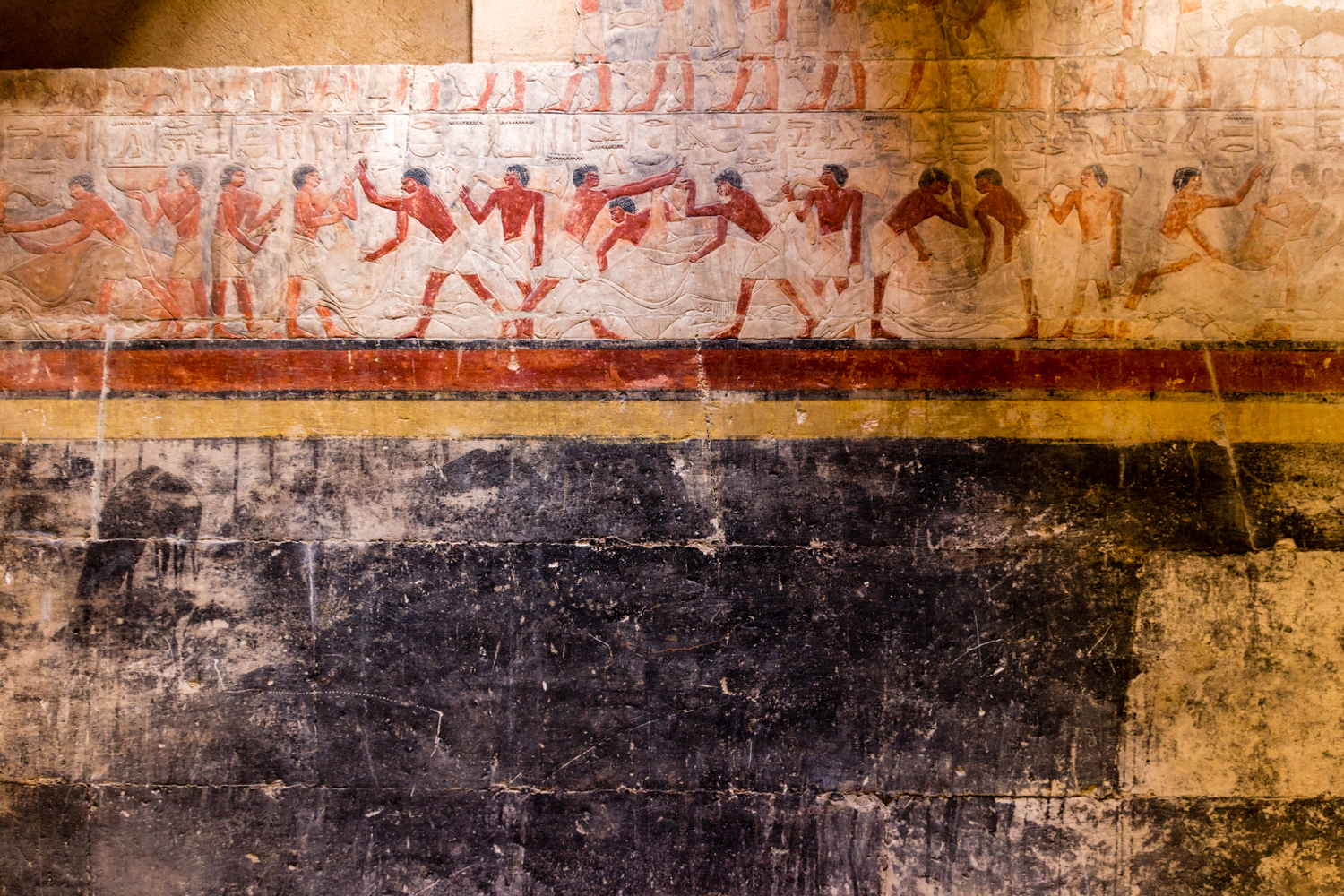 Tombs at the Step Pyramid

We went to the Step Pyramid on our last day and just getting to the pyramid itself was an adventure. We took the metro and from there hopped on several mini buses and eventually walked a bit. When you get there you don’t see anything other than the oldest Pyramid in the world and nothing else… just desert. The beauty is hiding below. Just a few steps below the ground are colourful and interesting tombs filled with hieroglyphics and artwork. It was probably the site we enjoyed most while in Cairo. 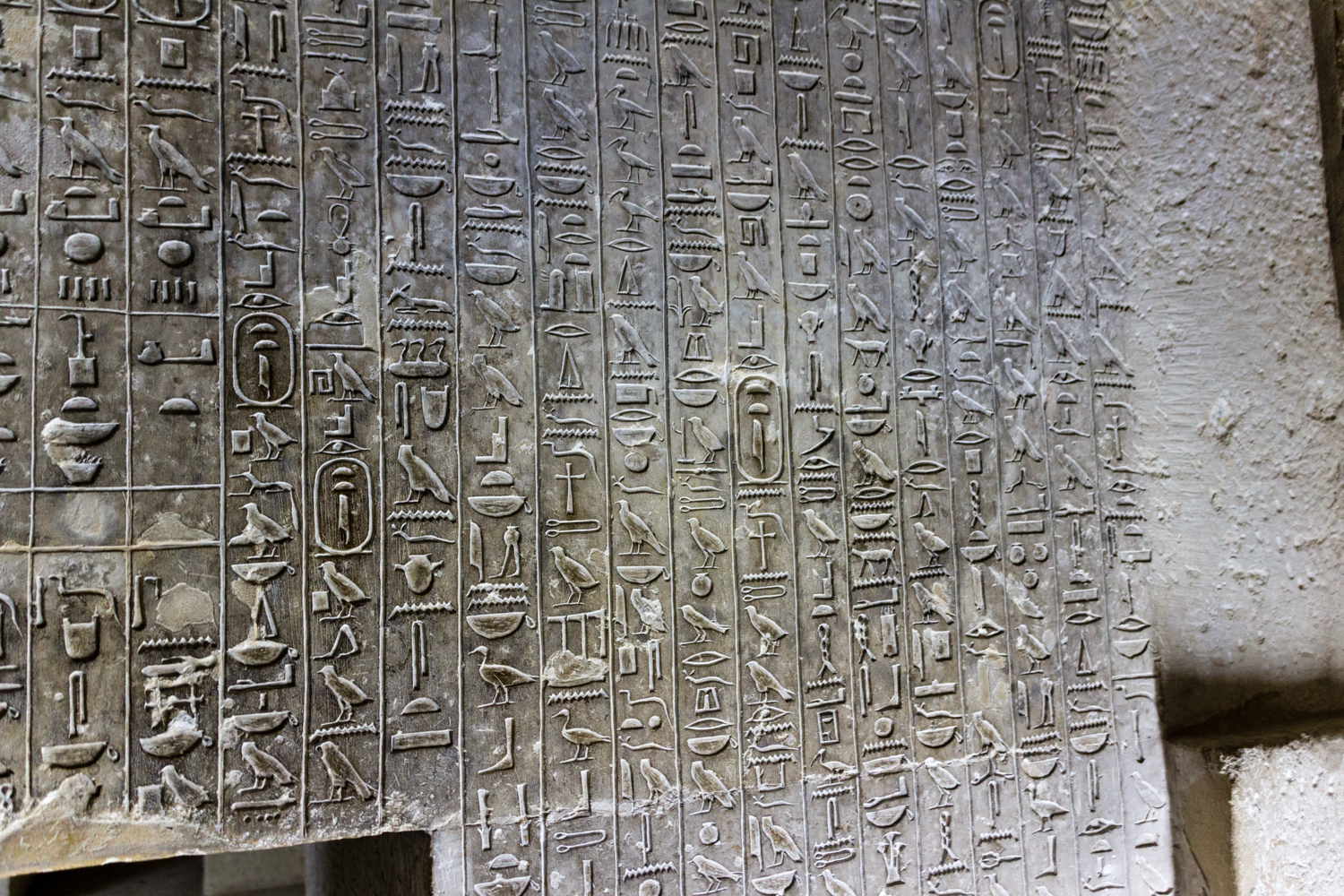 Tombs at the Step Pyramid

Back at our hotel Tanya came out and happened to find a guy with his helmet on and carrying a trailer. He was telling the receptionist that he is going to Cape Town. We immediately got excited and went over to say “Helloooooo”. Turns out we have the same direction and (almost) the same route! We both are planning to head to Uganda and loop around Lake Victoria.

Arthur has diabetes and has to think about medical supplies and managing his condition on the way. He is interviews people with diabetes in different countries as he continues on. See www.bikewithdiabetes.com for the interviews and to find out information on cycling with diabetes. 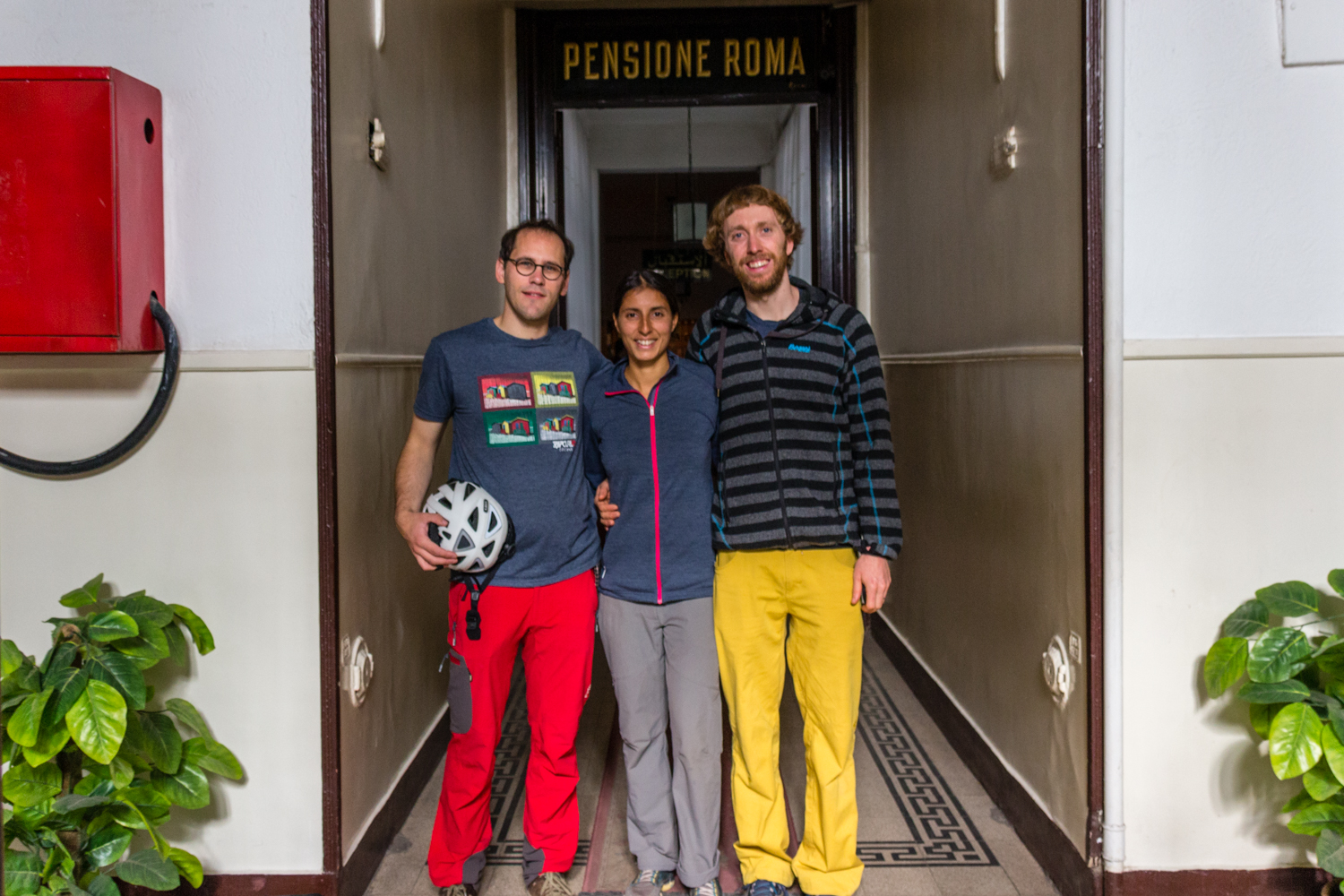 Cairo has been amazing, but after Geyikbayiri and Istanbul and 4 weeks of no cycling, we are ready to move on and see what the rest of Egypt has to offer. We got a taster but now we want more. For more photos from Egypt, click here.

Taxi costs from Downtown to:

Airport (50-80). For a van with the bikes from the airport we paid 500 L.E. which was a ripoff, you can get it cheaper and book it with companies online.

For taxis we would always negotiate the price to much lower than they first suggest (usually half), then when we arrived we would get out of the car and give them the exact money (+tip if they were very good) rolled up through the window. By the time they unroll it you are already gone and this avoids complaints, renegotiations and asking for a higher price.