After a comfortable sleep, we said goodbye to Fox and his family and gave them a small parting gift to say thank you. Walking through the streets of the town the ‘unfinished’ houses along the river now made sense. We were told that the houses in Egypt are mainly family homes, where parents, brothers, sisters, aunts, uncles and their immediate families own one of the levels. If anyone wants to, they can add a new floor… so the buildings are constantly under construction.

We started down the Nile once more, still not sure what the day would bring. After a very scary warning about safety in the region just north of Beni Suef, we are growing ever more confused about this country and its security situation.

On the one hand, people have said it is dangerous for tourists in this area as there could be trouble on an isolated stretch of 30 km. Others have said that people further south are closed minded and we could have serious issues with them as well. And some people have simply said that there is no problem.

We stopped for breakfast on the side of the road and a short while later a policeman stopped and asked about our direction. When we said Beni Suef he said that it is dangerous to the north of the city and that we should not stop on the way but rather cycle straight through. 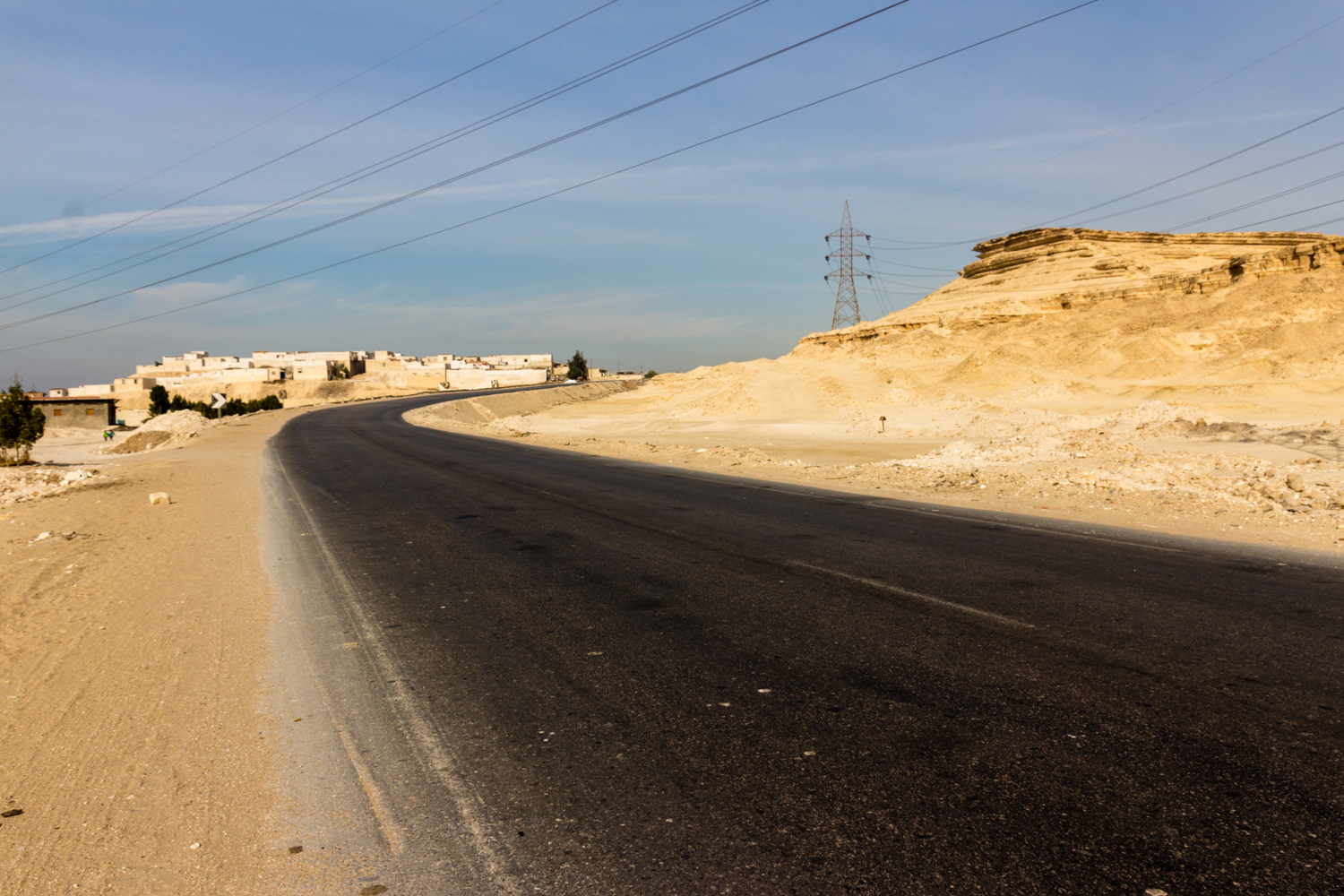 A desert stretch before Beni Suef

We packed up the food, got back on the road and a few hundred meters down the road were two police officers waiting in their car for us. Somehow, they knew we were coming and signaled us to stop. Okay, this was it, we thought… this is the police escort everyone is talking about. They asked us where we were going, our nationalities and first names. They then made a quick phone call and to our surprise said, “okay, you can go.” Huh?

We passed two more checkpoints that day and the police were again very friendly, smiling and waving with their massive guns beside them, saying “welcome to Egypt”. Maybe, just maybe, we could actually cycle the Nile without an escort.

The towns along the east side of the river were of course, loud, full of hooting, full of people and random traffic (including donkeys, horses and carts, tuk tuks, motorbike-truck hybrids, actual trucks, actual motorbikes) with half of it driven by boys. But once again, people have been very nice – so nice it is almost exhausting because everyone wants to talk to you. It’s only day 2 – we’ll just have to get used to being popular I suppose.

There was one negative incident today where two teenage boys on a motorbike pretended to punch Simon’s face. Some boys between the ages of 12 and 17 on motorbikes or in tuk tuks can be incredibly annoying… but the majority of people are very nice and they don’t present any real physical harm… so far. 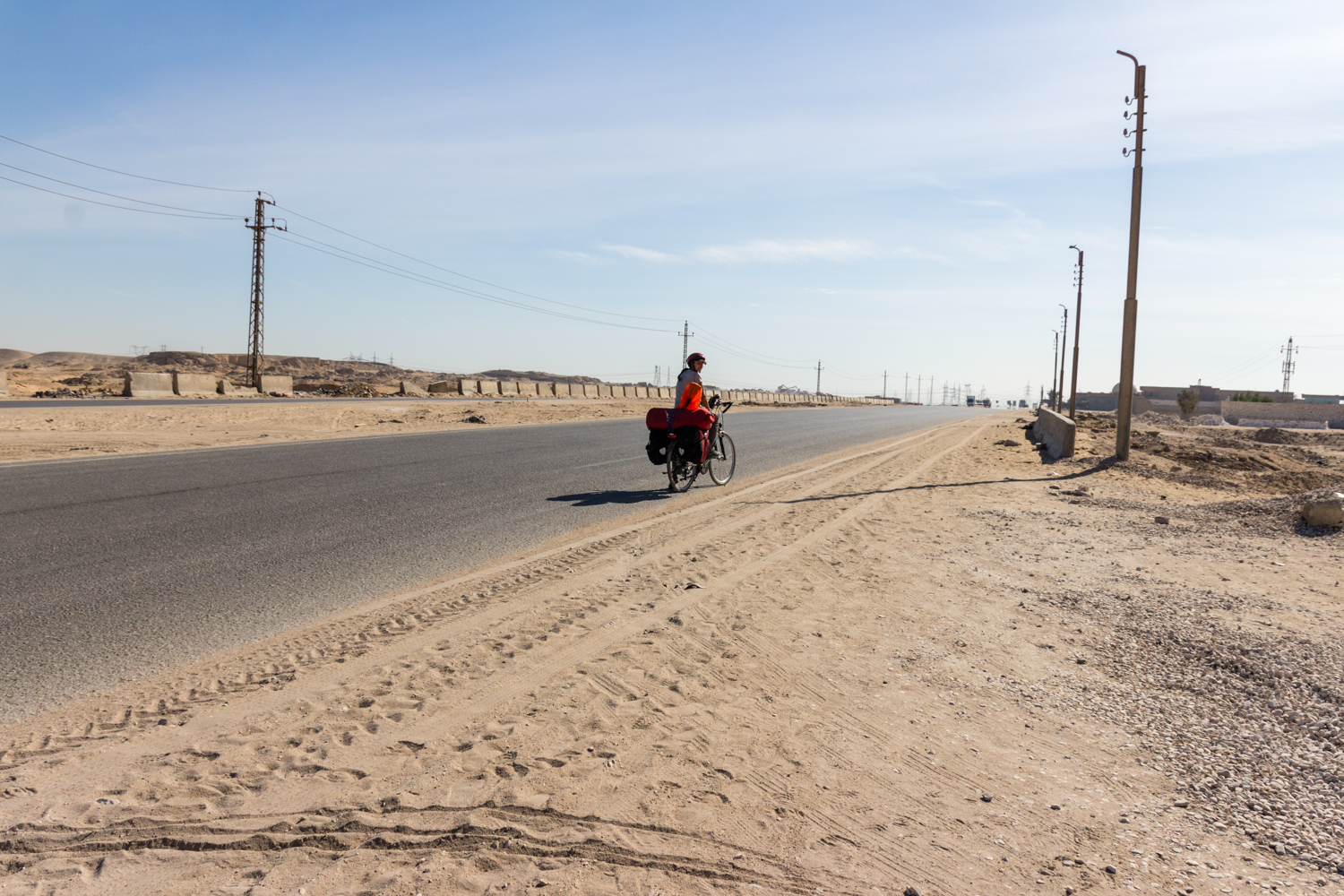 Beautiful, isolated stretch on the east side

We really appreciate information from locals but we feel that some warnings about ‘other regions’ should be taken with a pinch of salt. Every town that we have passed until now has been very friendly, a man even passed Tanya a cucumber out of his window. We are still a long way from Luxor, so this might still change, but right now the people along the Nile are reminding us of the wonderful people of Albania.

Just before entering the dangerous stretch, Tanya’s back wheel was deflating and then had a serious bump on the wheel. We found out this evening that part of the rim is flattened and air is leaking at the vent of the tube. Not even two days of cycling on this continent and already a broken wheel! It is hard to survive the nasty speed bumps here. Hopefully it will last until Luxor.

The isolated stretch of the road itself was very beautiful with green farmland to our right and the Sahara desert with its sandy mountains to our left. There were hardly any towns – mainly power plants, factories and new apartment buildings still being developed. We actually really enjoyed the peace and quiet for a change with less people around and less traffic (even if one eye was on the lookout for any danger). The people in towns we did come across wanted us to join them for lunch, gave us big smiles and waves and in general were very excited to see us. Two fighter jets did fly over us, though, reminding us that Egypt is fighting an internal struggle, just maybe not right here or right now. 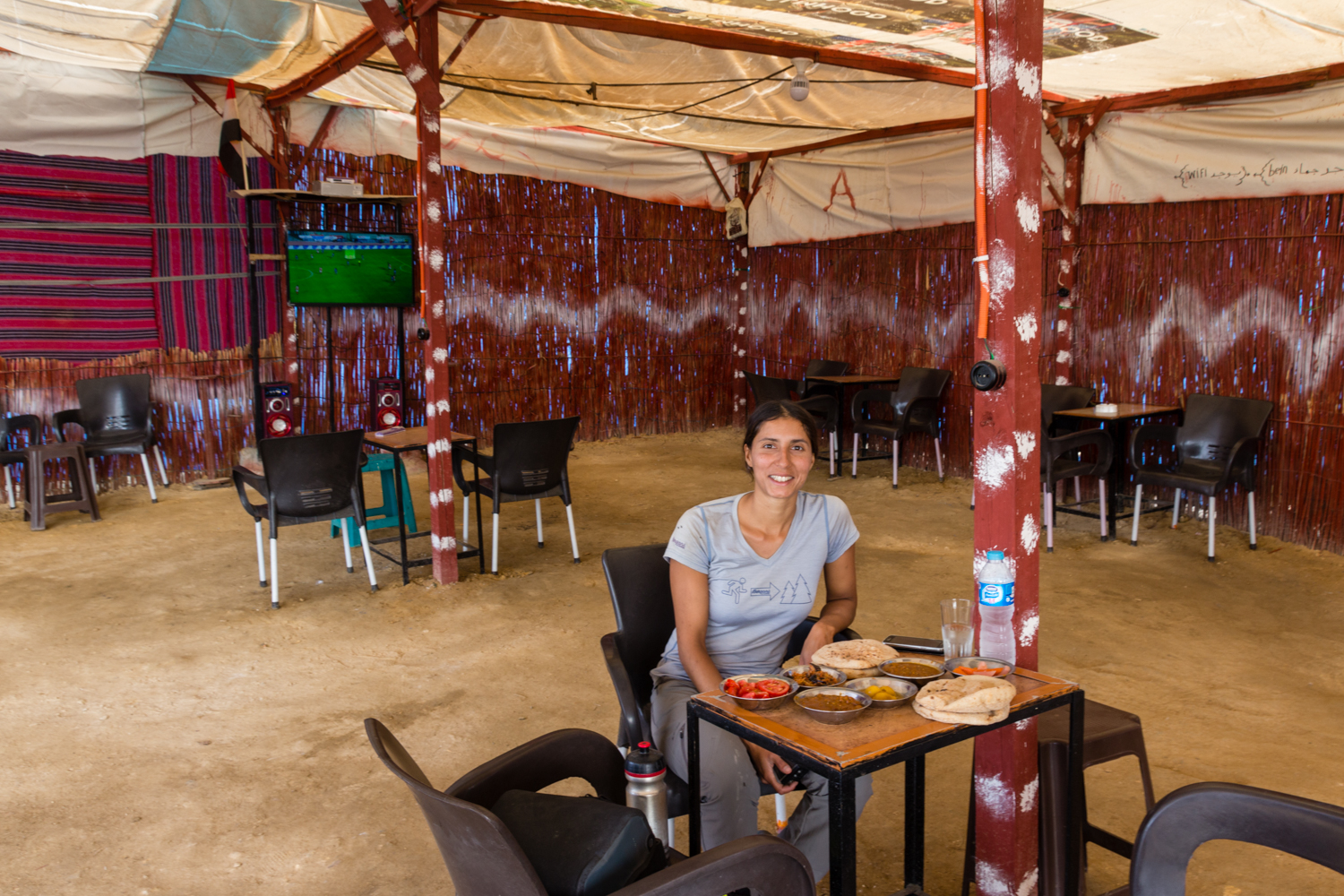 Great food and coffee at this cafe

Before arriving in Beni Suef, we found a quiet road side stop to sit down to have a late lunch and Egyptian coffee. The food was delicious and the coffee here in Egypt is to die for. It is reallyyyy good with lots of cardamon and spices. Some have a divine velvety chocolate taste too. Like many cafes so far, the man didn’t even want to accept our money, we had to insist.

Once in the city, we tried to get a room together at one hotel but they refused unless we had a marriage certificate with us… who carries that on a cycle tour?! Went to another hotel downtown which was cheaper and they gave us a room together without ‘proof’.. although only after a long discussion and finally an ‘extra’ charge. We received delicious mango welcome drinks and the staff were very friendly.