We knew we had entered Austria when we saw an elderly man mowing his lawn in lederhosen. OK, this is Austria. We were also greeted with views of snow capped mountains. It was both epic and daunting at the same time.

We tried to minimise our elevation gain by following valleys and rivers as much as possible, first following the Saalach river to Zell am See. The weather was hot with blue skies most days and the rivers had this beautiful turqoise colour. People were very active with kayaking and cycling was a common theme. 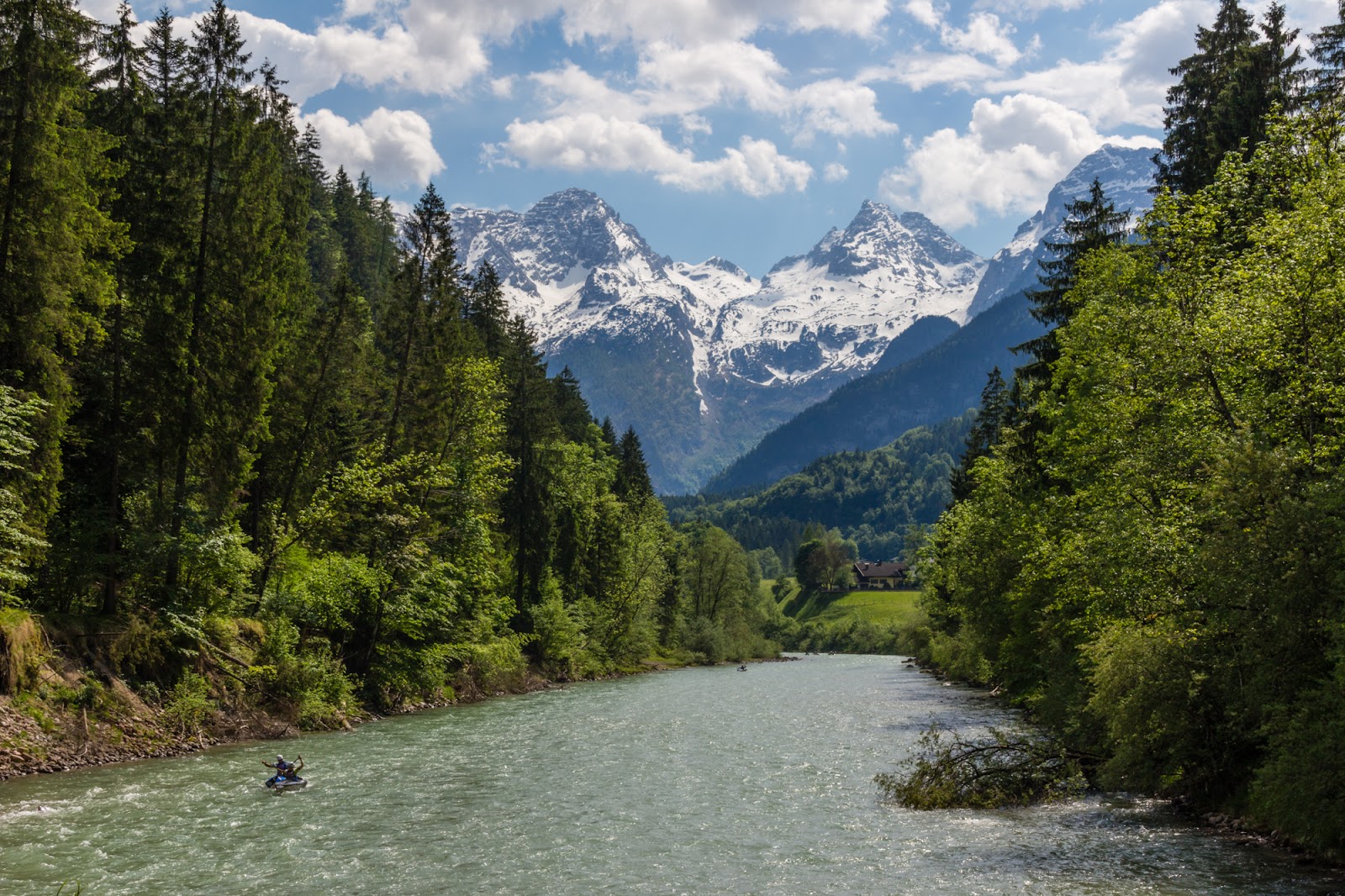 Going through the Alps in Austria

We wildcamped until we got to Weißbach bei Lofer, a small little village with some impressive climbing walls. Finding places to wildcamp was not easy though; most of the land at the base of the mountains was private – either for farming or housing. At times we had to look for a camping spot for one or two hours, sometimes camping in very obvious places. At least people were friendly and didn’t seem to care.

Near Weißbach we camped at probably the best campsite Simon and I have come across – Ferien Weisen operated by the OEAV. Not only were there great views of the mountain tops, but they had nice indoor communal areas, free WiFi, a free washing machine, friendly staff and free showers… Oh man… The showers. Don’t get me started. 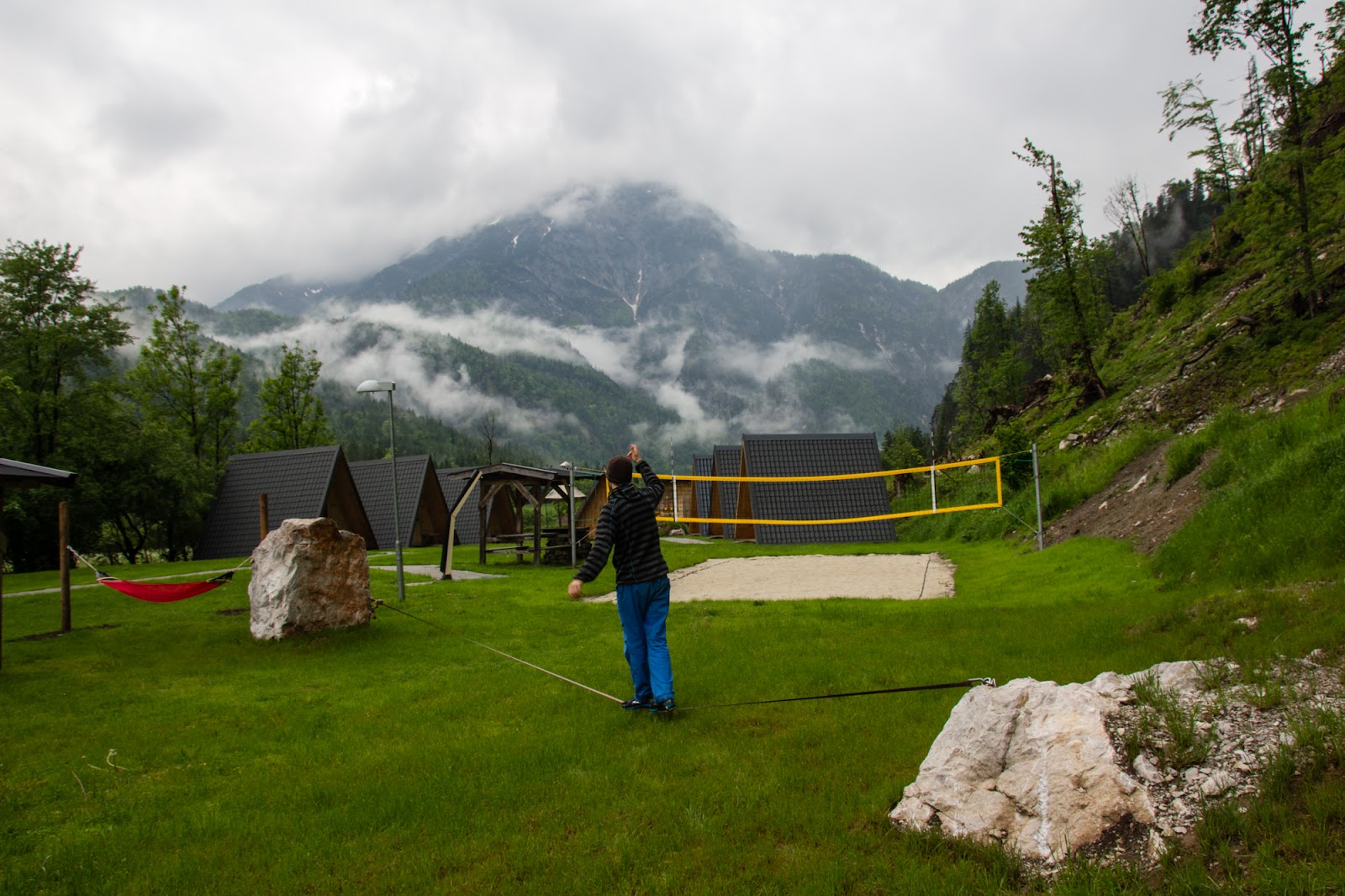 As we were setting our tent up, a heavy thunderstorm rolled in. The wind picked up fast and before we knew it the lightning was above us. Tanya made the mistake of leaving her bike behind… The wind was so strong that it blew it over with such a force that the metal piece holding the bike stand snapped in half.

We had more thunderstorms and rain over the next two days. Since we had the entire campsite to ourselves, we migrated into one of the warm and cosy communal areas. The chef here was also super friendly! He gave us some food and allowed us to use the private kitchen. 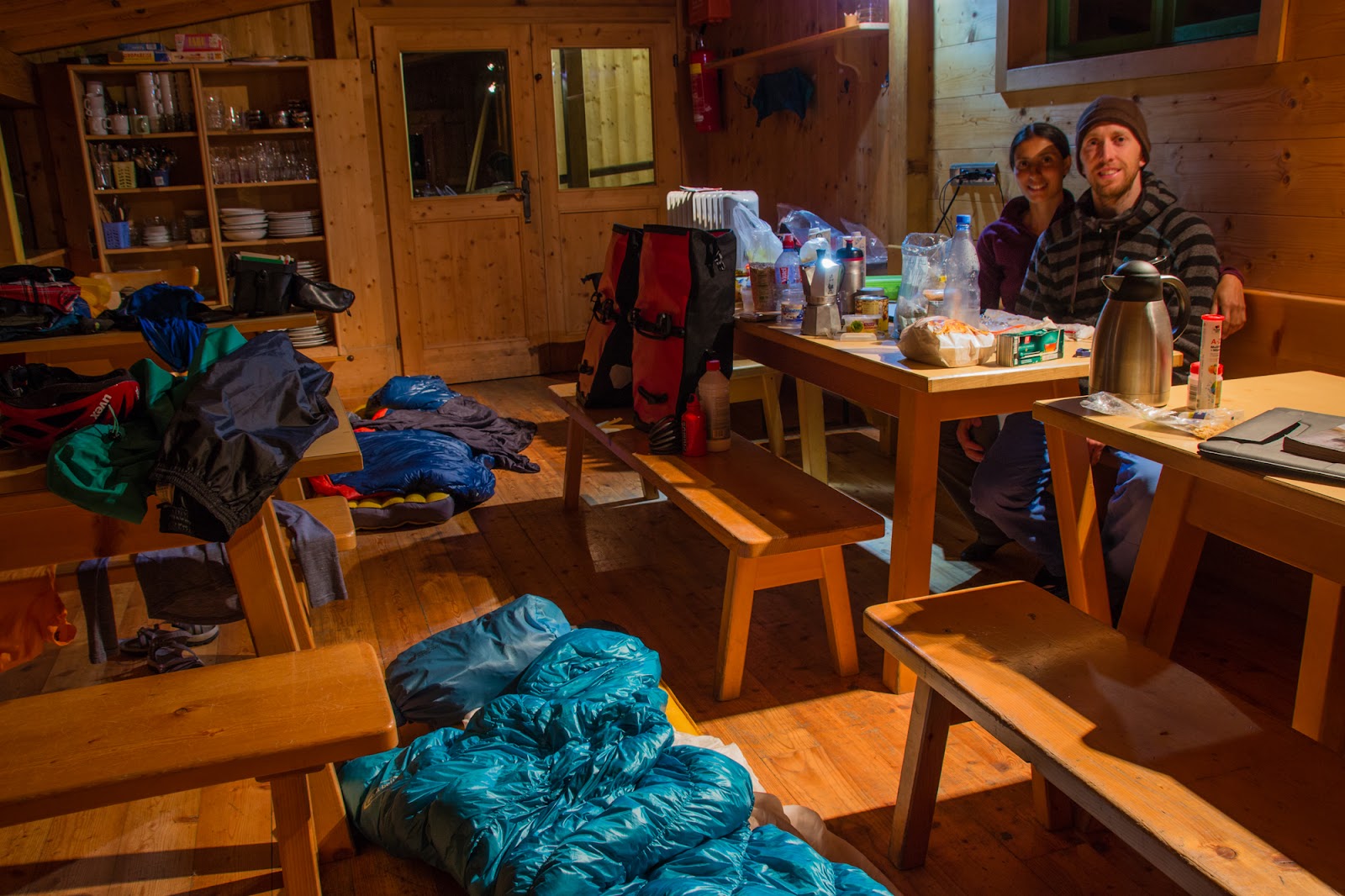 Cosy and warm and all for ourselves

The weather was not great, but perfect to visit a cave nearby called “Lamprechtshölle”. This cave is 55 km long and has a long history of exploration and tales of lost treasures from a legendary knight. The walkway allows visitors to explore it for a few hundred metres, as it gets higher and higher and the raging water louder and louder. It was worth the visit. 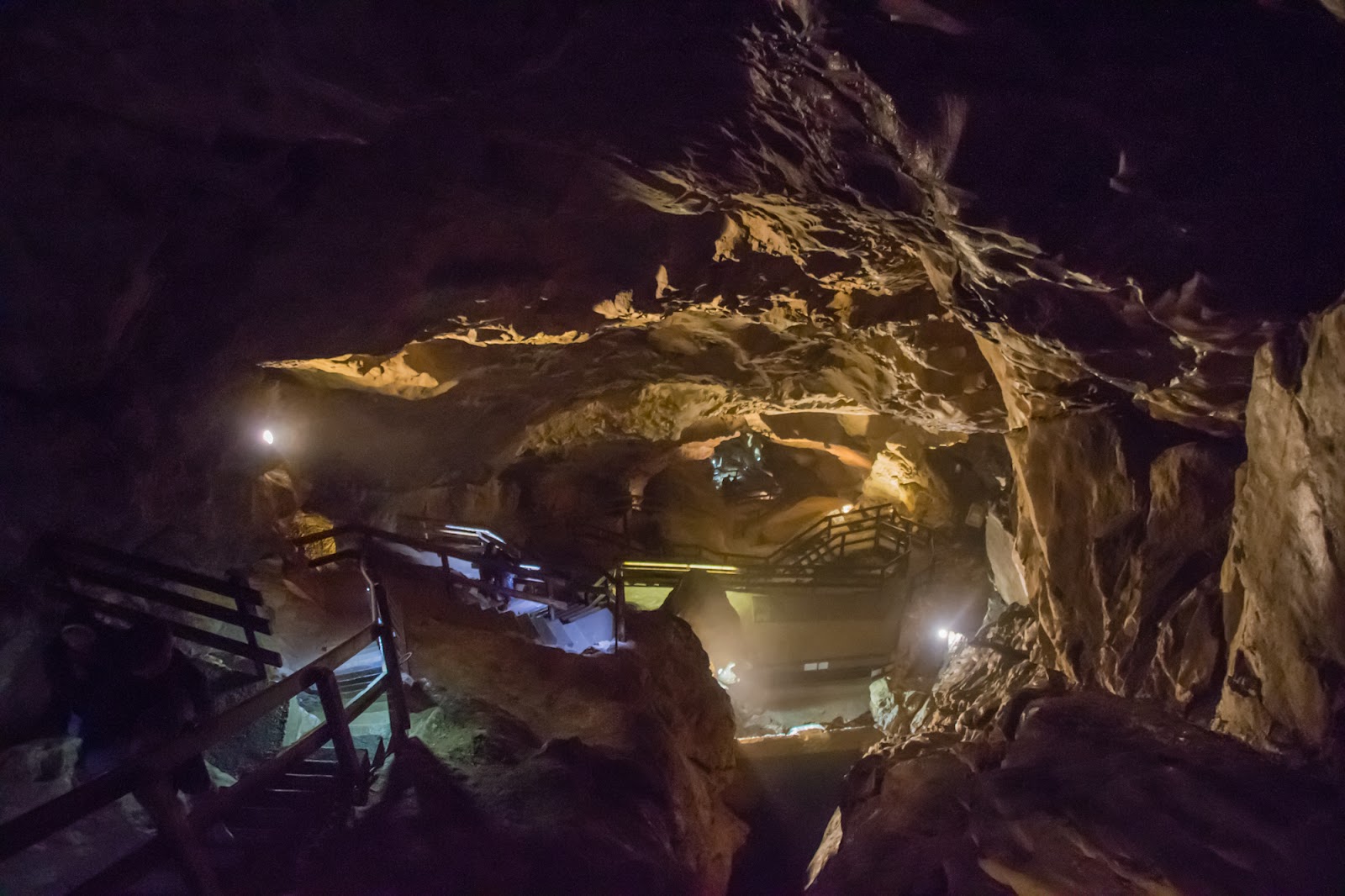 After a few nights, we decided to leave the cosy campsite and head to Badgastein – where we would take the train through a mountain to Mallnitz. Simon had started to feel a little sick, but we decided to go on anyway. We had a good day biking, when around 4 pm Simon started to feel exhausted and sick.

We quickly found somewhere to wildcamp. It was not the best place, right next to the main road, but at least it was reasonably protected and somewhere to rest. Unfortunately, we underestimated Simon’s condition and that night was hell for him. We’ll spare you the details, but let’s just say he did not get much sleep that night. In the morning, I just heard him throw off his sleeping bag and whip the tent open – before hearing “The dragon spitting fire”.

We decided we had to find a room with a bed to lay on and a bathroom. We first had to bike to the next town, which unfortunately had no guest room and not even a supermarket. So we made the decision to take a train to Dorfgastein 10 km away. We were pointed in the direction of the cheapest guest room and found ourselves in a comfortable room, with a sofa and a view. Just what the doctor ordered. 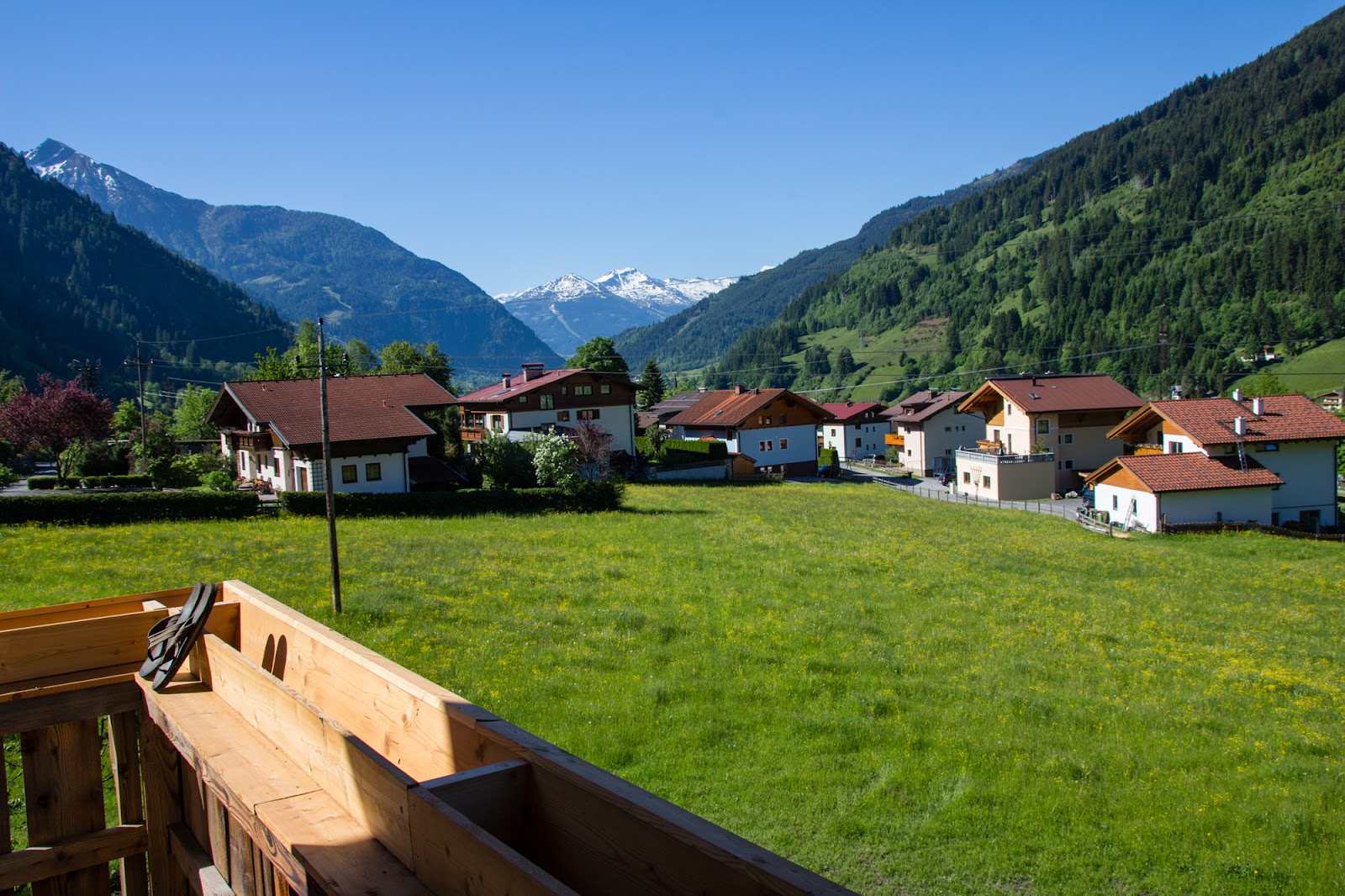 View from our private ‘hospital’

Simon, being the fighter he is, decided to go on the next day to Badgastein. This was by far the toughest, most greulling and exhuasting day so far. It is still amazing that he did it in the condition he was in – running on only coke and salt sticks and with us not only carrying our biking gear but the climbing gear as well.

Before Bad Hofgastein the road gets incredibly steeper and steeper… At some points the road was way too steep to cycle and we had to push our bikes up. After the next town – Badgastein – the road gets more manageable and we eventually arrived at the train station. 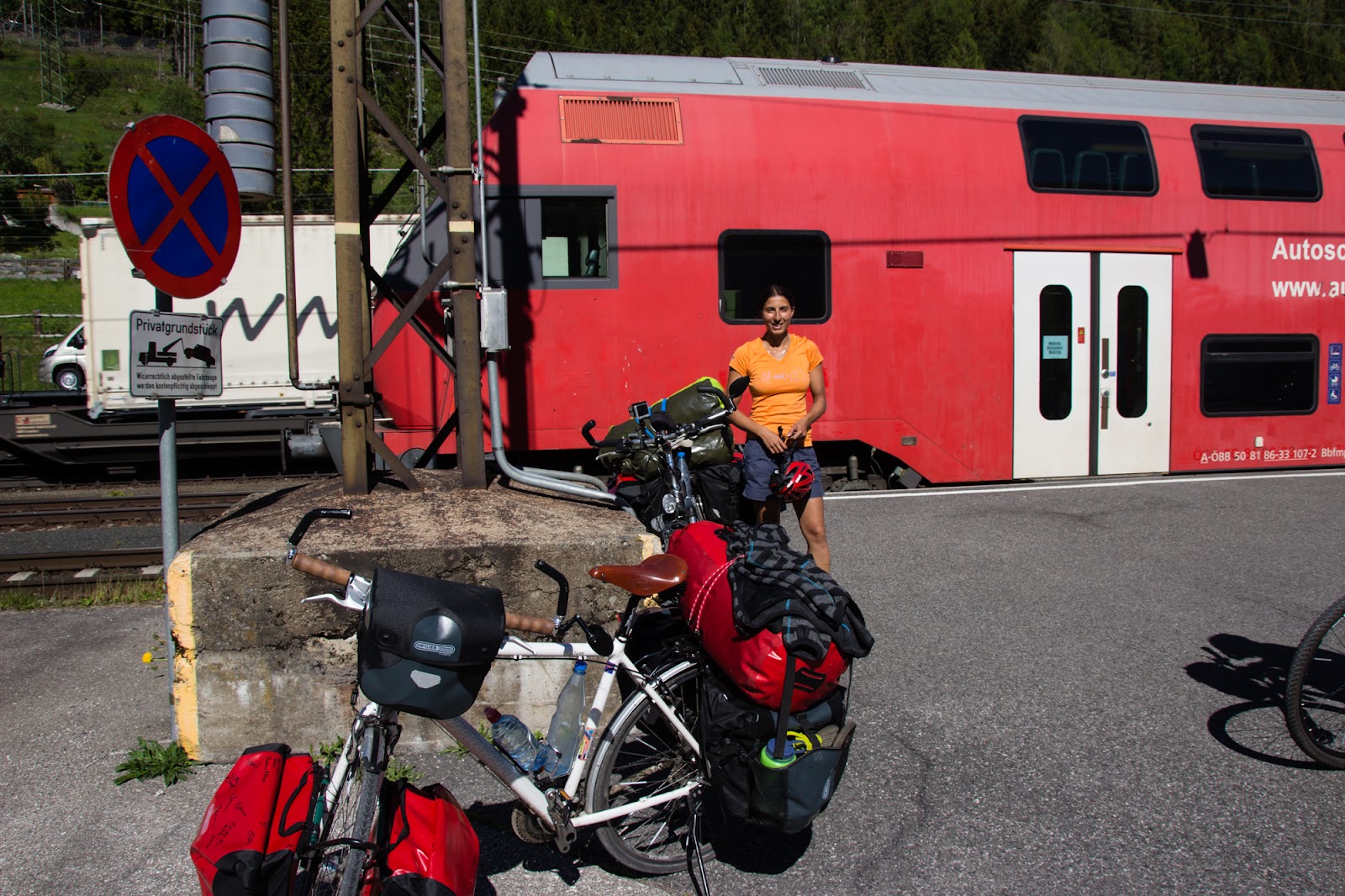 Taking the train through the Tauerntunnel

We got off the train in Mallnitz and waited for the cars to leave first. THEN…. we took the road all the way down! This was one of the most enjoyable moments of the trip so far. Cycling down twists and turns for hundreds of metres with the most incredible views all the way down. The best part about it was that we earned (nearly) every metre in elevation by ourselves. 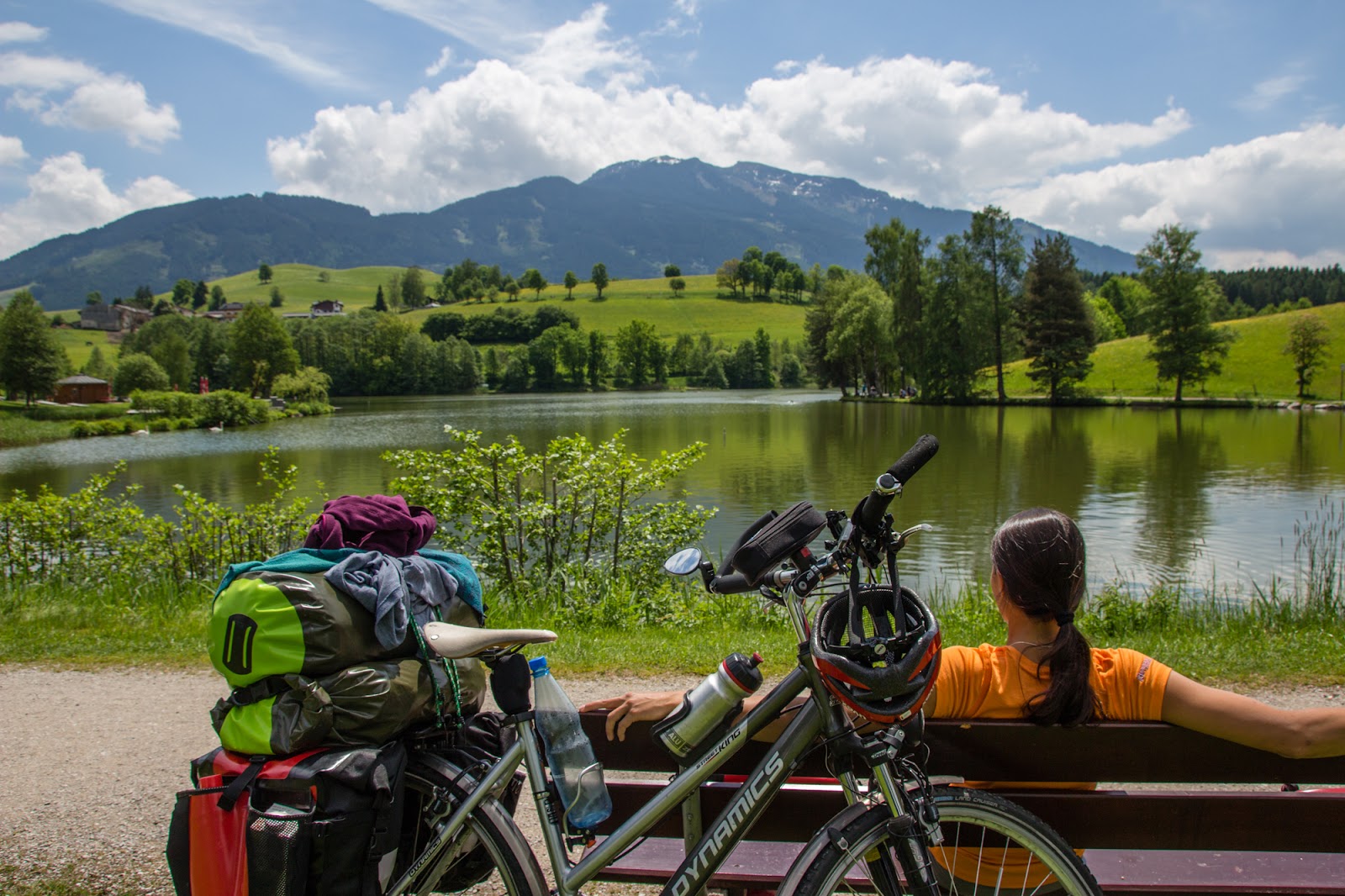 Lunch break with a view

From there we headed towards Villach, following the Möll river. After a new record of 80 km in one day, we reached a campsite near Faakersee lake, from where we could directly kayak through a forest of reeds out onto the lake. We kayaked across it and pulled up on a beach where we could enjoy a swim in the turquoise water. We also spent a day climbing at Kanzienenberg, a climbing crag nearby. 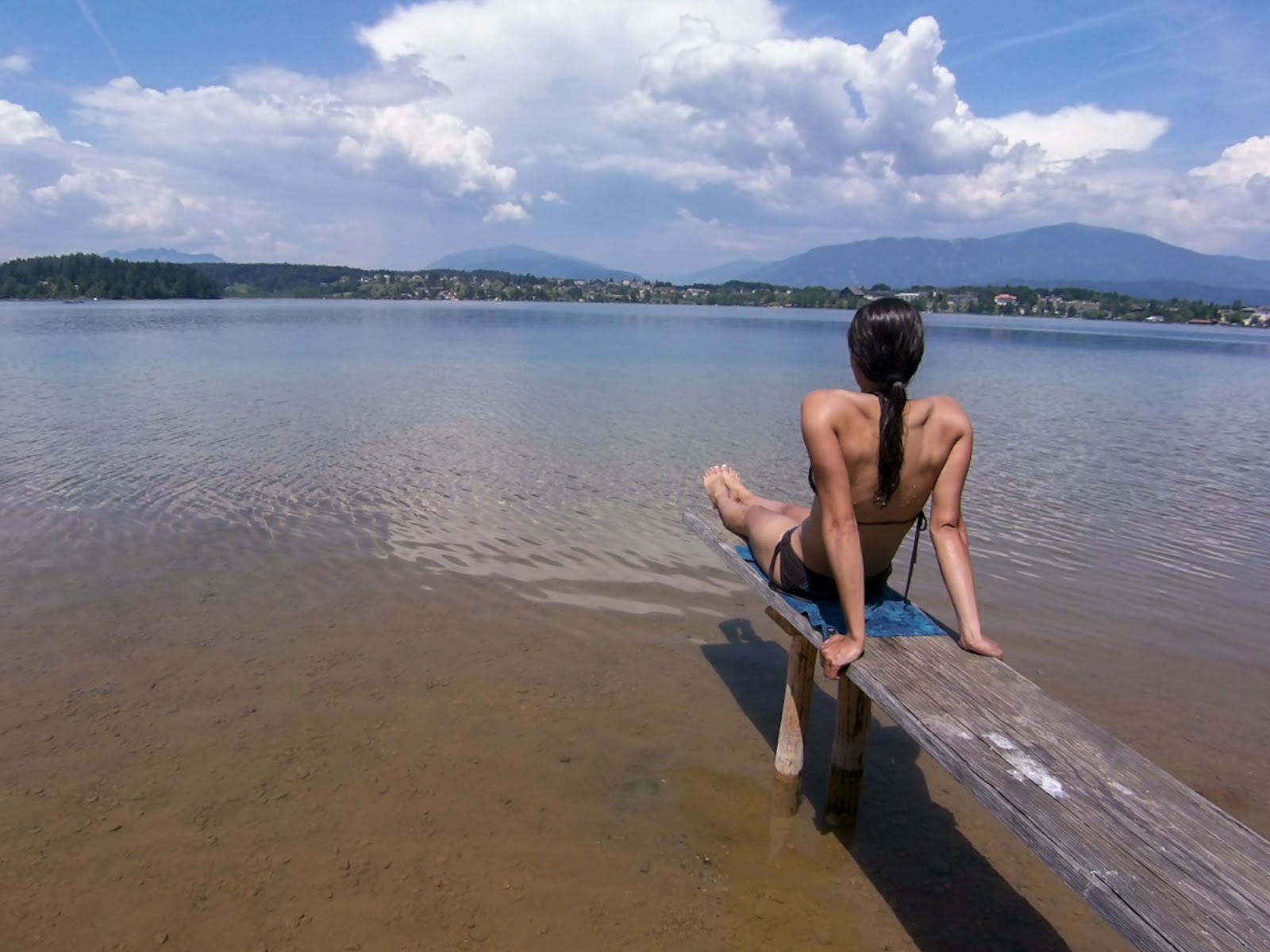 After another relaxing morning at a different lake – Silbersee – we headed towards the city centre of Villach and couchsurfed with some locals. One of these locals was Clary, a German engineering student. Clary is a fellow climber and she took us to Millstätter See to climb on some cliffs that drop straight into the water!

We climbed down some rocks onto floating wooden platforms where we belayed from. It’s just too bad that a storm rolled in just before we could take a dip. 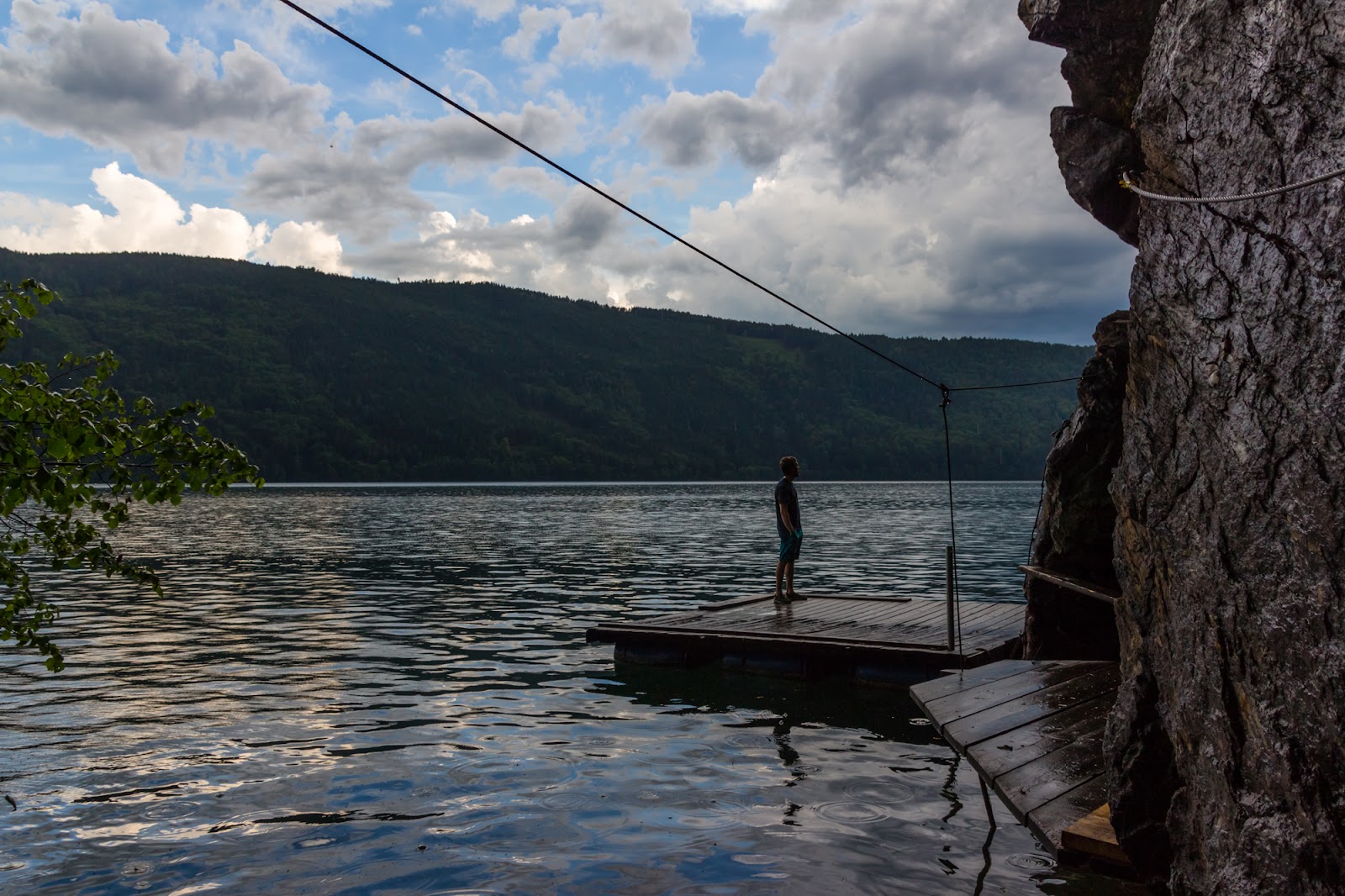 We would have loved to spend more time in Villach and with Clary, but we needed to keep moving and we also had a deadline to reach Osp in Slovenia. But first, Ciao Italy!

More pictures about Austria can be found here.